Phil Taylor is mainly known as the only Liverpool boss never to manage the club in the First Division. Taylor had been connected with Liverpool Football Club for over 20 years when he was asked to succeed Don Welsh at the end of the 1955-56 season. Born in Bristol, he had been a schoolboy international for England before playing for one of his home-town clubs (Rovers) as first an amateur and later a professional. He was signed by Liverpool in March 1936 for £5,000, which was not an insignificant sum for an 18 year old at the time.

Already a first-team regular when barely out of his teens, Phil’s professional playing career was cut short by the Second World War as it was for many of his contemporaries. But while many of his colleagues were too old to play again when the war was over, Phil was relatively young at 27 with many good playing years still in front of him. His best period was immediately after the war when he won a championship winners’ medal (1947) and played in an FA Cup final (1950). His three full England caps came in 1947 as well. He was a solid and reliable half-back and a natural choice to replace Jack Balmer as club captain.

Good players though do not necessarily make good managers. Phil had two years on the coaching staff at Liverpool before being invited to take over the role of manager but this was a completely different responsibility. Sometimes people are ‘too nice to be a manager’, the suggestion being that you need a bit of a ruthless streak in you because it is such a risky and competitive business. Maybe not so much in the 1950’s as in more modern times but perhaps this applied to Phil? Perhaps he found it difficult being remote from players he had been on the same level with just a short time earlier? Whatever the reasons, Phil found the pressure of getting Liverpool back into the top division almost intolerable.

He immediately entered the transfer market and brought in goalkeeper Tommy Younger and inside forward Johnny Wheeler, who was moved to midfield soon after his arrival. A 3rd place finish in 1957 followed by a 4th place finish in 1958 might have been satisfactory enough at some other clubs but not at Liverpool where a new chairman appointed in 1956 Tom (T.V.) Williams had ambitions that certainly surpassed some of his predecessors. Although Taylor hung on until November 17, 1959 one suspects that a terrible F.A. cup defeat to non-League Worcester City earlier in the same year hastened his departure from the manager’s seat.

Taylor admitted that "the strain of trying to win promotion has proved too much." After a superb 23 years at the club a sorrowful Phil Taylor spoke to the Liverpool Daily Post about his decision: "No matter how great has been the disappointment of the Directors at our failure to win our way back to the first division, it has not been greater then mine. I made it my goal. I set my heart on it and strove for it with all the energy I could muster. Such striving has not been enough and now the time has come to hand over to someone else to see if they can do better."

He later reflected on his time as manager in Alan A'Court's autobiography published in 2003, "My Life in Football": Looking back, one of the biggest differences with today was the position of the manager. At that time, teams at almost all clubs were picked by the board of directors, though they usually did ask the advice of the secretary or coach. I know both Don Welsh and myself had to present our teams to full board meetings, often involving eight or nine directors. If you had been winning, the directors were unlikely to object to your team, but it was much harder when you wanted to make changes, and I can remember times when the side that ran out was not really the one I had wanted to play. I was probably not a strong enough personality to be a good manager, because you really need to insist on being in charge if you are going to be successful."

Phil Taylor took a complete break from football and became a sales representative for a while. It was a shame things hadn’t worked out for him as Liverpool manager but being the manager of the same club where you have been such a successful player will always be a hard act to follow. The act that would follow Phil though would change the fortunes of Liverpool Football Club for ever.

Phil Taylor resigned at Liverpool FC after 23 years at Anfield.

John Martin followed the team's fortunes when the team got relegated in 1954.

Dave Hickson's transfer from Everton to Liverpool caused quite a stir at the time!

Are Liverpool right to leave out Liddell?

David Jack talks to a puzzled player in 1958.

Interview from the Liverpool Echo on 2 February 1993.

"No matter how great has been the disappointment of the Directors at our failure to win our way back to the first division, it has not been greater then mine. I made it my goal. I set my heart on it and strove for it with all the energy I could muster. Such striving has not been enough and now the time has come to hand over to someone else to see if they can do better."

"Full respect to Phil Taylor. Definitely one of our great players of all-time. And the lovely thing about it is that he still comes to the games even now. I don't know whether he's been to every game but he must have been to as many games as probably anybody around I would think – you know, between playing, managing and watching." 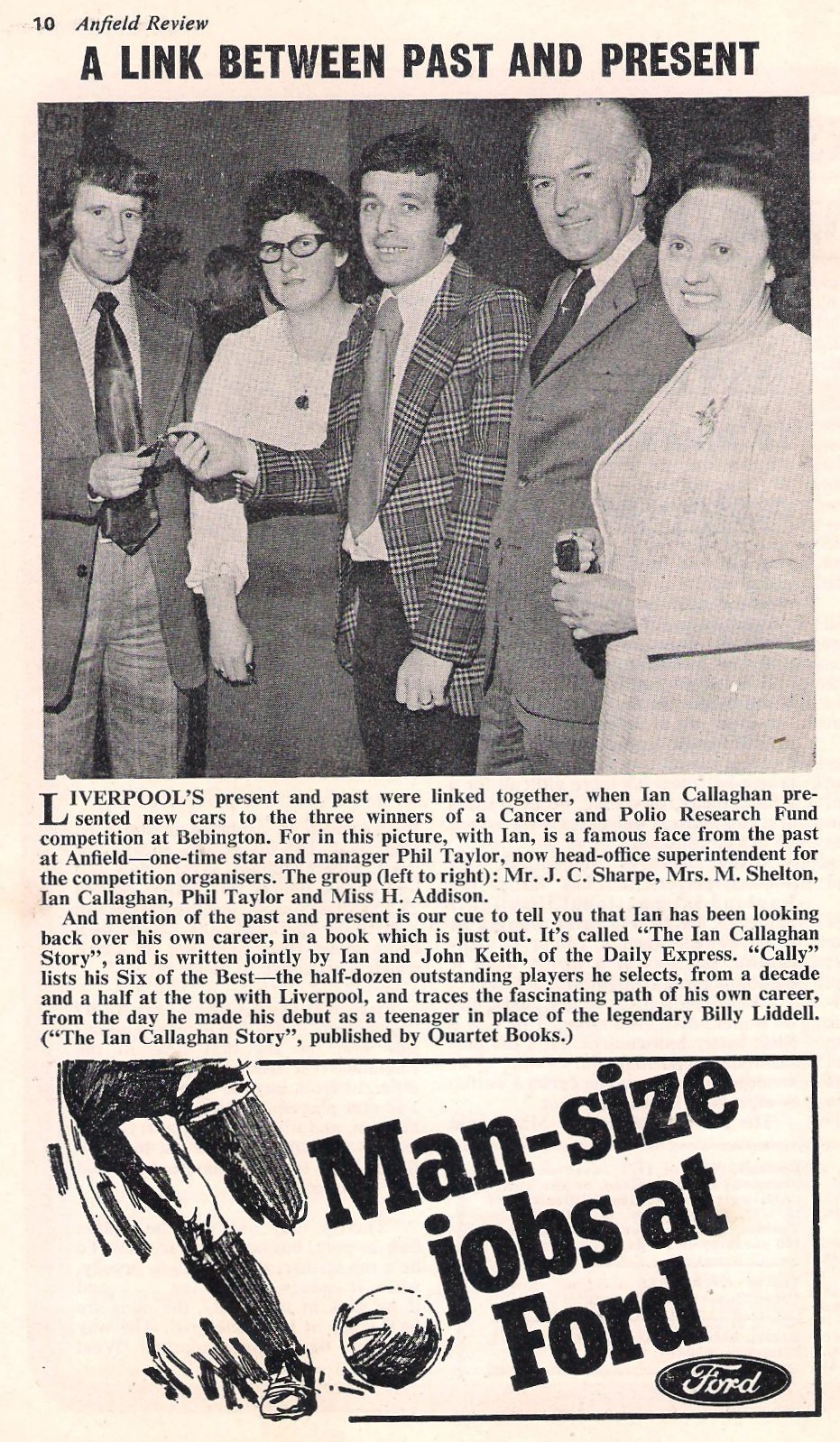 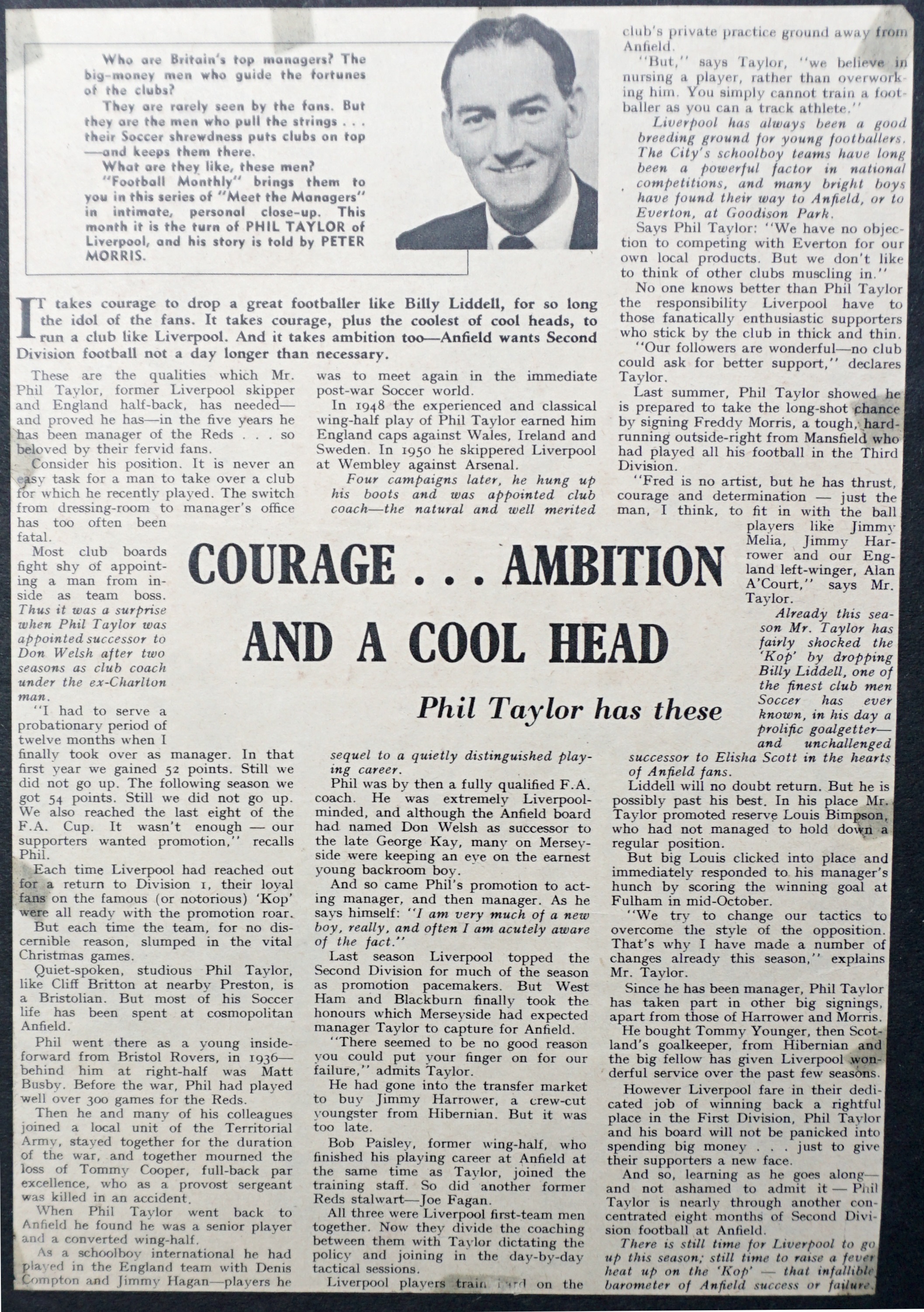