Twentyman was an established centre-half at Carlisle United when he arrived at Anfield, having made 149 League appearances from 1946-1953. A local lad, born in Brampton on the outskirts of Carlisle on 19 January 1930, he caught the eye of the third division north side playing for Swift Rovers in the Carlisle and District League and agreed to become a part time professional in 1947. He made his debut aged 17 years and four months against New Brighton on 26 May 1947, putting in a steady performance in a 2-2 draw. Twentyman was, at that time, the youngest player ever to appear in Carlisle's first team. Manager Ivor Broadis knew he had a potentially fantastic player at his disposal and Twentyman, who was a natural with both feet, was eased gently into the first team. The second half of the 1948/49 season brought regular first-team football for the fast developing youngster, who standing 5ft. 11 ins. (180 cm.), built his reputation as a forceful and spirited player. A new manager called Bill Shankly took over at Brunton Park in March 1949, who proved to have an even bigger influence on Twentyman's life later on. Shankly switched Twentyman to No. 5 and the 1949/50 season found Twentyman starting alongside the strong Dennis Stokoe and the pair became the reason why the team conceded only 20 goals at home all season and managed a healthy ninth spot finish.

When Twentyman had reached National Service age he had no choice but to go. At one point Private Twentyman was summoned to his CO's office and was told, "The War Office has been approached by a Mr. Shankly who says that if you could be released Carlisle would win the Third Division Championship!" He was duly made available for 32 appearances, but United could only manage third spot. Shankly left Carlisle for Grimsby in the summer and the 1951/52 season brought only 16 Carlisle appearances due to military commitments, but Twentyman kept himself fresh with the impressive Army side. Twentyman reclaimed his place in 1952/53 and played 38 games. After ten more appearances for Carlisle in the following season Twentyman left for Anfield. Carlisle manager, Fred Emery said that the destruction of their stand by fire earlier this year forced their hand: "We have to build up our finances, so we had to let Geoff go.” Grimsby manager Shankly wished Twentyman well in a letter dated 18 December 1953. "Congratulations on your stepping up to the big stuff, it's taken these people a long time to make a move for you. However Geoff it has been worth it for you, because you have gone to probably the finest club in the game, with the most ardent supporters ever, behind you. You have no need to worry, just keep on looking after yourself, that's what counts, you will probably find the first division much easier than the third, but a fit, strong, confident Geoff Twentyman can play in any class."

The presence of England centre-half Laurie Hughes and later Dick White, meant Twentyman switching to No. 6 at left-half at Liverpool. Twentyman's playing career at Liverpool coincided with the club's lean years. He joined them for the then substantial fee of £10,000 in December 1953, just four months before Liverpool were relegated to the Second Division after finishing rock bottom of the top-flight with only nine wins from 42 games. After relegation in 1954 and a mid-table finish in 1955, Liverpool were always challenging for promotion back to the top division but third-place finishes in 1956 and 1957 were not quite good enough. Twentyman played regularly during those two years and contributed with an impressive total of ten goals as well. He was, however, not best pleased not being able to feature in his ideal centre-half position and threatened to leave the club in February 1957.

Twentyman played 15 games on average his last three years at the club. Towards the end of the decade, Ballymena United wanted him as a player-manager and despite the pleading of the recently arrived Liverpool boss Bill Shankly, his former boss at Carlisle, Twentyman readily agreed and moved across the Irish Sea. A relatively successful period of management followed until Twentyman wanted to focus again just on the playing side and he returned to the North of England for the 1963/64 season, re-joining a strong and ambitious Carlisle United. He played only a small part as United went on to win promotion, finishing second in the Fourth Division. He moved away as his playing options became limited and went on to manage Morecambe, Hartlepool and Penrith before accepting Shankly's offer of the post of chief scout at Anfield in 1967.

Twentyman was the model professional in every sense of the word. Unhurried and unflappable on the pitch, hard working and dignified off it, he became a widely respected and welcomed figure in football. His presence on the pitch was a steadying influence for both players and fans. His talent-spotting became almost legendary on Merseyside, unearthing some of the game's real giants like Ian Rush, Phil Neal and Alan Hansen and he is fondly remembered at both Anfield and Brunton Park. Twentyman worked also under Paisley, Fagan and Dalglish before leaving his post after 19 years in 1986 to become Graeme Souness' chief scout at Rangers.

Former teammate, Alan A' Court, remembers him with great fondness: "Geoff Twentyman was typical of that old Liverpool side, a hard grafting half-back, who could hold his own with anyone and never stopped working. Geoff used to love a bottle of Guinness, especially at half-time when he needed to replace lost body fluid, as he perspired a lot. Another man would have been a fool to drink a bottle like that, but it did him good, and simply emphasised that people's metabolism can be very different!"

For any Liverpool supporter with an interest in the club's rich history, this is one of those "must-read" books!

"Geoff was a fantastic guy and a great fella to have around Anfield at the time. He always had a story to tell about football. You could sit there all day and listen to him.

You just have to look at the players he helped sign, the likes of Alan Hansen, Phil Neal, Ray Clemence and Ian Rush. They are all legends in their own right, I could go on and on.

Geoff possessed a special eye for a player and I think that is what he will always be best remembered for. If he recommended a player, you knew that player had to be good. He was very gifted in that line of work. Geoff done some miles and put in some hours for the good of this club. The role he played in our success cannot be underestimated and we are eternally thankful to him for that."

“I received a hot tip from a fellow in Dundee about a youngster he rated ‘the best kid ever seen in Scotland’. I drove north to see this boy play. When he ran out his socks were by his ankles. He looked slovenly. Something I don’t like. After only 10 minutes I left. The trip was a complete waste of time. The kid didn’t deserve the rave reviews. He was never going to make the grade. There are many bad scouts sending in reports to clubs. Claiming expenses for their efforts. Many clubs would do better sending their expenses to charity! Their scout’s judgement isn’t up to scratch. I admit I’m not infallible. But I hope to be right 80% of the time.”

Geoff Twentyman had his own way of doing things 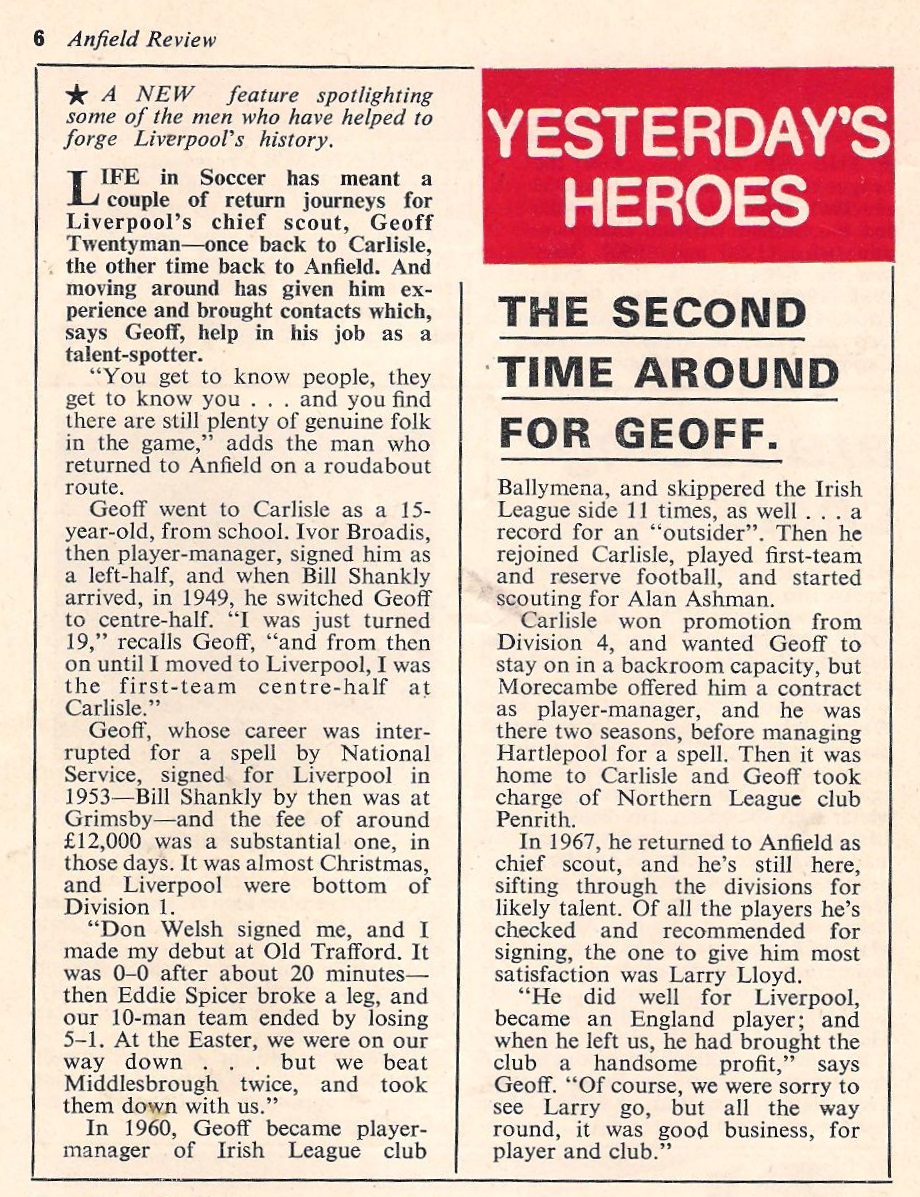