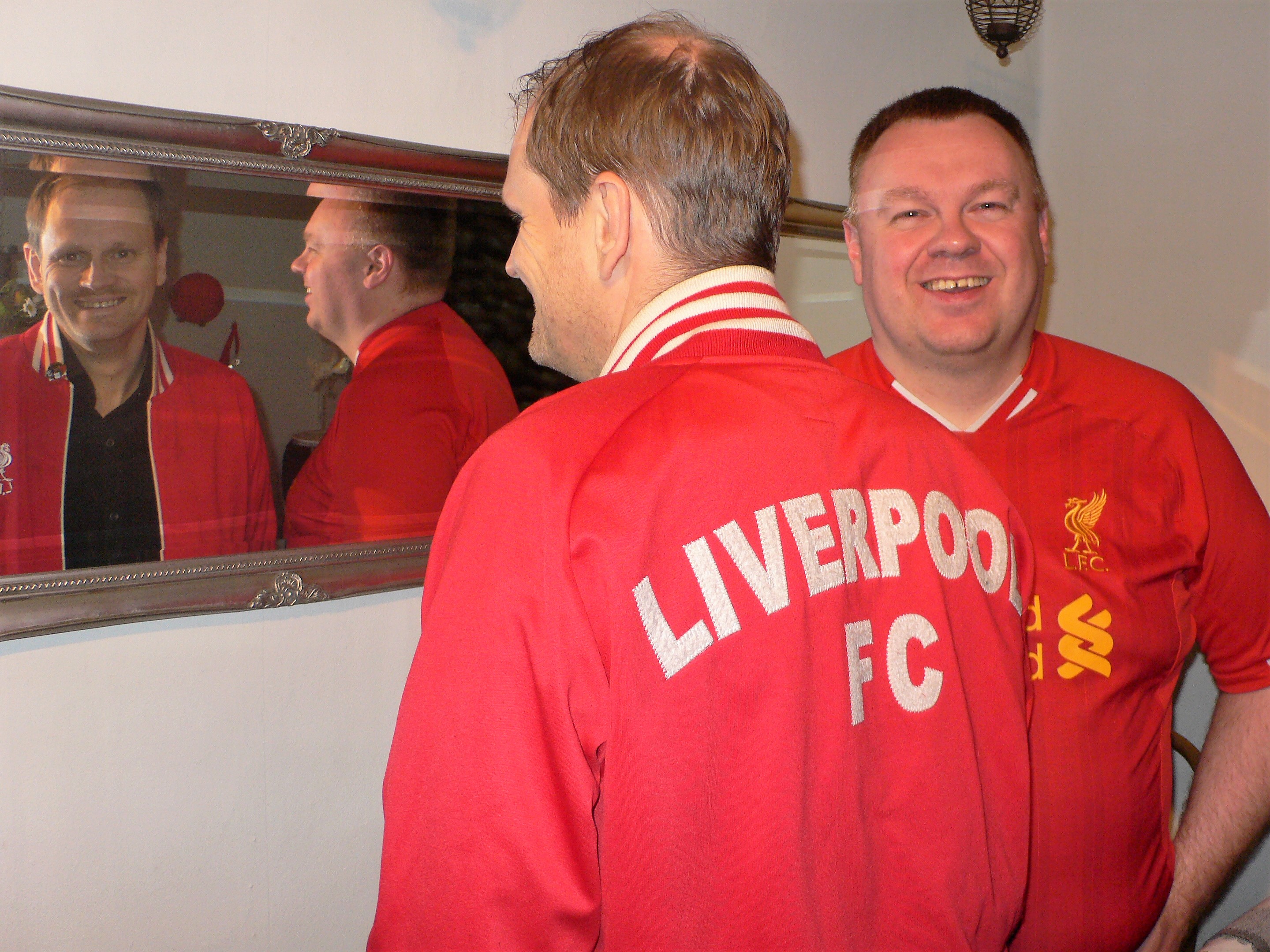 Arnie Baldursson (the editor - on the left of the image) and Gudmundur Magnusson (the webmaster - on the right) set out to create a simple and an accessible website about Liverpool FC after they had been in the same roles on Liverpool‘s official Icelandic fan club site for 4 years. Their mission was to offer a different perspective on Liverpool FC to what was already on offer on the Net, a website with no forum, based on stats, historical articles and exclusive interviews. The domain, LFChistory.net, was bought in May 2002 and thus began the long process of making detailed plans and designs. Their idea was to start with the Shankly era from 1959 and then adding info from 1892-1959 as the site would develop. 16 months later LFChistory.net was launched on 8th September 2003.

On 7 October 2004 stats from 1892-1959 had been added and LFChistory.net finally had all the results from official games and friendlies, every single line-up, all goalscorers and profiles of all the players who have appeared on Liverpool's teamsheet since the 1892/93 season.

The great pioneering work of Brian Pead has contributed a lot to the statistical documentation of Liverpool Football Club and formed the basis for all historians‘ research into the club’s facts and figures. When Arnie and Gudmundur went through their sources, they didn't treat any total number of goals or games attributed to players as untouchable. They challenged the sources behind the stats, looking at them in detail and correcting those that were clearly not correctly documented either in books or on the Net. There were no official Football League records as such for goalscorers and not uncommon that scorers would vary from source to source especially in the first decades of the club‘s existence. In those instances LFChistory.net has compared reports from local papers such as the Echo, Daily Post, Mercury and Courier and determined which was the most convincing as well as keeping in mind no newspaper is infallible.

What began as a hobby in 2002 has evolved into something much more than that proving a valuable resource to Liverpool Football Club culminating in an agreement with the club in 2009 effectively making LFChistory.net‘s stats the official stats of the club, a fact that Arnie and Gudmundur are incredibly proud of.

A select group of people deserve a good mention for helping Gudmundur and Arnie to keep LFChistory.net going.
Maciej Konofol has been our social media editor since September 2018. He has been thoroughly dedicated to our cause and increased the number of our followers on Facebook, Twitter and Instagram significantly.

Graeme Riley provided us with the line-ups and goalscorers for all opposing teams, enabling us to give an even more complete profile of the games on this site. Graeme was a regular visitor to Anfield until he moved away from the area in the early 1990s. His passion for Liverpool is matched only by his interest in football statistics.

Adrian Killen has quite a comprehensive coverage of practically every LFC game from 1946 to present day. These are all in semi-professional scrapbooks up until the 70s, part of which he has shared with the readers of LFChistory.net and can be seen in corresponding match reports in the Season Archive. He worked from 2005 to 2011 as a tour guide at Anfield.


Kjell Hansen released "Dicky Sam‘s – Liverpool FC in blue and white“ providing a diary of the first years of the club and is the editor of the exceptional Playupliverpool.com. He has provided us with rare newspaper articles about Liverpool and been forthcoming in adding all kinds of stats and information to our site.

Chet Murarji published an excellent Liverpool players directory which has comprehensive details about every player who has featured for Liverpool. Chet's research has been an excellent resource and he has assisted the site in many queries.

John Shimmin has provided us with plethora of information on the mighty Reds, press cuttings and pretty much everything you can think of. John has enriched our archive greatly for which we are grateful for.

Brian Duffy has shared with us many facts and figures and reports from various games, many of which has attended as he tells us: "I particularly remember the Christmas Day match in 1954 when we beat Ipswich 6-2. I was 14 at the time and watched the game from the Boys' Pen, high up in the corner of the Kop. 11.15 kick off and I recall that the pitch was white-over, either frost or a sprinkling of snow. Liverpool's performance that day was phenomenal, quite out of character in an uninspiring season, our first of eight in the old 2nd Division. And yet I hardly missed a match, home or away, travelling to Doncaster or Scunthorpe, Plymouth or Bristol, wherever the fixture list led me. They call them the 'Good Old Days."


Eric Doig is the co-author of "Essential History of Liverpool". He is the grandson of Ned Doig, Liverpool's first international goalkeeper. A lifelong Liverpool supporter and season ticket holder from the early 1960s, he is also a member of The Association of Football Statisticans. Since retiring as a medical scientist in 1990, he has devoted much of his spare time to studying the history and statistics of Liverpool Football Club. Soon after our site went online Doig got in touch and proved invaluable in getting every detail right.

Chris Wood joined the LFChistory team in 2004 and until 2015 he was part of our team relentless in checking facts and rechecking facts. He is responsible for composing a number of player profiles on the site as well as other articles. Chris’ first game at Anfield was in 1969 and since then has been fortunate enough to watch the Reds in live action over 1000 times.

LEGAL NOTICES
Where applicable and where copyright has been established, LFChistory.net is glad to acknowledge the source of any material on these pages that can be proven to originate elsewhere.