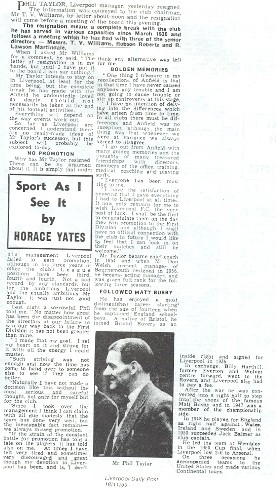 Phil Taylor, Liverpool manager, yesterday resigned. The information was conveyed to the club chairman Mr. T. V. Williams, by letter about noon and the resignation will come before a meeting of the board this evening.

The resignation means a complete break with the club he has served in various capacities since March 1936 and follows a meeting which he had with three of the senior directors - Messrs. T. V. Williams, Robson Roberts and R. Lawson Martindale.

When I asked Mr. Williams for a comment, he said: "The letter of resignation is in my hands but until I have put it to the board, I can say nothing."

Mr Taylor intends to stay on in Liverpool, at least for the time being, but the complete break he has made with the Anfield he undoubtedly loved so dearly, should not necessarily be taken as the end of his football activities. Everything will depend on the way events work out. So far as Liverpool are concerned, I understand there are no ready-made ideas of Mr Taylor's successor, but this subject will probably be explored to-day.

Why has Mr Taylor resigned? There can be no arguement about it. It is simply that under his management Liverpool failed to gain promotion, although in his three years in office the club's League positions have been third, fourth and fourth. Not a bad record by any standards, but for the ambitious Liverpool and the equally ambitious Mr Taylor, it was just not good enough.

Las night a sorrowful Phil told me: "No matter how great has been the disappointment of the directors at our failure to win our way back to the First Division, it has not been greater then mine. I made that my goal. I set my heart on it and strove for it with all the energy I could muster. Such striving was not enough and now the time has come to hand over to someone else to see if they can do better.

Naturally I have not made a decision like this without the most serious and careful thought, not only for myself but for the club. Since I took over the management I think I can claim with all due modesty that the team has done very well, but the inescapable fact remains - we always missed promotion. If the strain of the constant battle for promotion has told a tale on the players, it has told also on me. At times I have felt very tired and sometimes very discouraged and great though my devotion to Liverpool has been and is, I don't think any alternative was left for me.

"One thing I treasure in my recollections of Anfield is that in that time I have never caused anybody any trouble and I am not going to cause trouble or stir up controversy at this stage. I have no intention of delving into the differences which have arisen from time to time. In all clubs there must be differences and Anfield was no exception, although the main thing was that whenever we were at variance we always agreed to disagree."

"I go out from Anfield with many golden memories and the thoughts of many treasured friendships with directors, members of the office, training, medical, coaching and playing staffs. Everyone has been most kind to me. I have the satisfaction of knowing that I gave everything I had to Liverpool at all times. It now remains for me to wish Liverpool F.C. the very best of luck. I shall be the first to congratulate them on the day they win promotion to the First Division and although I shall have no official connection with the club in future I would like to feel that I can look in on their matches and still be welcome."

Mr Taylor became chief coach in 1954 and when Mr Don Welsh, present manager of Bournemouth resigned in 1956, he became acting manager and was given full rank for the following three seasons.

He has enjoyed a most distinguished career starting from the age of fourteen when he captained England schoolboys. A native of Bristol, he joined Bristol Rovers as an inside right and signed for Liverpool in 1936. In exchange, Billy Harthill, former Everton and Wolves centre forward, went to the Rovers and Liverpool also had to pay a fee. 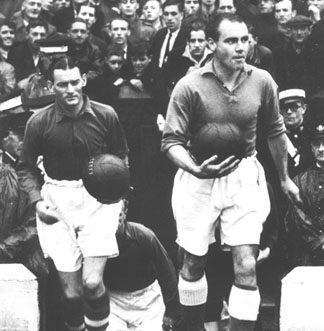 After the war he was converted into a right half to step into the shoes of the famous Matt Busby and in 1947 was a member of the Championship side. In 1948 he played for England as right half against Wales, Ireland and Sweden and in 1950 succeeded Jack Balmer as club captain. He led the team at Wembley in the 1950 Cup final, when Liverpool lost 2-0 to Arsenal. On three occasions he accompanied teams to the United States and made various Continental tours.