Are Liverpool right to leave out Liddell? 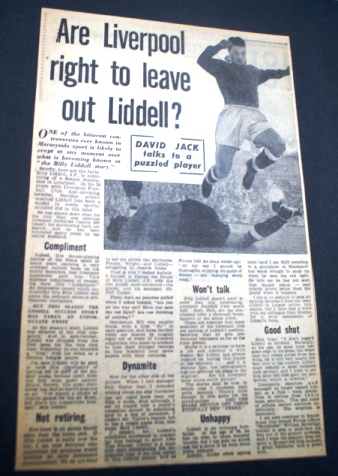 On the 18th of October 1958, 36-year-old Billy Liddell was dropped by Liverpool for the first time in his career vs. Fulham at Craven Cottage. This was unheard of and created much anger among Liverpool's followers and the press.

Everton and Arsenal legend Joe Mercer, then manager of Aston Villa, almost immediately bid for his services. "He'll get goals anytime. He's a goal-getter. He always was and will be", said Joe at the time. Liverpool had no intention of selling their prime asset. "Not for £100,000," said veteran president TV Williams adding with foresight, "There will never be another like him."

So how did Liverpool dare drop their greatest legend? This following article is an indication how controversial this decision was.

One of the bitterest controversies ever known in Merseyside sport is likely to erupt at any moment over what is becoming known as "the Billy Liddell story".

Briefly, here are the facts. Billy Liddell J.P. is something of a Soccer institution in Liverpool. In his 20 years with Liverpool Football Club, non-smoking, tee-total, Sunday school teacher Liddell has been a model to every sportsminded kid in the land. He has played more often for the club than any previous Liverpool footballer (nearly 500 times), his goalscoring feats are legend, and he has been honoured many times by his native Scotland.

Indeed the Soccer-playing Justice of the peace spent so many years carrying a very ordinary Anfield team on his sturdy shoulders, that Liverpool supporters paid him the supreme compliment of renaming the club "Liddellpool". An impressive record which undoubtedly lifts Billy Liddell well above the ordinary ranks of professional footballers.

But this season the Liddell success story has taken a unfortunate twist. At the season's start Liddell was relieved of the club captaincy. And in mid-October, Liddell was dropped from the first team for the very first time. Yesterday he also recorded another first with his debut as a Central League player. I'm sure Liddell will be glad to have this opportunity of turning out in ANY of the Anfield teams because apart from one first team game against Bristol Rovers, this great footballer has had no match practice at all. "I've played a couple of charity games for the All Stars, but this is not competitive football", says Liddell.

That is why I visited Anfield. I wanted to discuss the future of Billy Liddell J.P. with the two people most concerned - the player and his manager, Mr. Phil Taylor. There were no punches pulled when I asked Liddell, "Are you on the way out?" "Have you seen the red light?" "Are you thinking of retiring?" Gentleman Bill was equally frank, with a firm "No" to each question. And those decided views are shared by roughly eight out of every 10 Liverpool supporters, who make no attempt to hide their enraged feelings as they bombard local newspapers with their opinions. 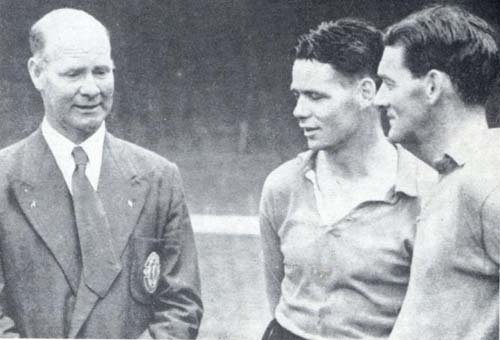 Phil Taylor was Billy Liddell's team-mate from 1939-1954 and a good friend.
They are here talking to their manager Don Welsh.

Now for the other side of the picture. When I told manager Phil Taylor that I intended to write about his star footballer the air could have been cut with a knife. And although I see no reason why a player's relegation should be akin to a keg of dynamite, I respect Mr. Taylor's request not to use a single quote from him about Billy Liddell.

Billy Liddell doesn't want to enter into any controversy. Liverpool Football Club won't talk. Here, then are my conclusions after a thorough investigation of the whole affair. There are rumours that some members of the Liverpool club are envious of Liddell's position, believing that he gets preferential treatment as far as the rules permit. Maybe it is a privilege to have a job and combine it with Soccer, but Liddell has always insisted on having this clause in his contract and it is obvious that the arrangement has not affected his game in the slightest. Are his Liverpool team mates really jealous? The stories may be true, in which case I condemn such petty jealousy. There's little enough in this game for the crowd-pullers. AND THE STARS SHOULD GET THEIR PITIFULLY FEW PERKS.

Liddell is an unhappy footballer. At the age of 36 he has no wish to cause transfer trouble, but I am sure he would ask for a move if he were three years younger. Liddell, unlike other ageing stars (and I am NOT referring to a gentleman in Blackpool) had sense enough to pack up when he sees the red light. He tells me he has not seen that danger signal and nobody knows better than the player when it happens. I am in no position to pass an opinion because I have not seen Liddell in League action this season, but I have had a word with my colleague Ivan Sharpe, for a brief assessment of Liddell's form.

Says Ivan: "I don't regard Liddell as finished. Naturally, at his age, he must have lost some edge to his game but when that ball comes across from the wing he is still very nearly the best shot in the country. Liddell must remain a most valuable club servant, and I hope to see him help the club gaining the promotion which is overdue."

Liverpool's directors and manager no longer regard Liddelll as a first-team player. That is obvious from the team selection, This sad state of affairs cannot continue indefinitely. The eruption is imminent. I am sure everyone in Soccer hopes that former Flying Officer Pathfinder William Beveridge Liddell is able to path-find his way out of his present problem. And I hope the situation does not deter a 20-year-old link between a great footballer and a great club.