Joe Fagan tried his luck as a player with Liverpool but manager George Kay said he wasn't good enough. Joe went on to be quite a depandable centre-half with Manchester City. Joe returned to Liverpool on 30th of June 1958 as a coach. He was put in charge of the Liverpool reserves in July 1971 and following Shankly's surprise departure as manager he was promoted to 1st team trainer in July 1974. By 1979 he had become right-hand man to Paisley. On 1st of July 1983, Fagan took over as manager from Paisley. Bob was a tough act to follow but everything fell into place for the new manager in his first season. Joe wrote his name in the record books by becoming the first British manager to win three major titles in one season; the League, the Milk cup and the European cup. Fagan had inherited a strong side from Paisley but that's never been a recipe for success. The team needed a strong character to keep it going. What faced Fagan now was to live up to his own and fans' expectations after such a fairytale season. The omens were not good. One of the strongest characters in the side and skipper Graeme Souness had left for Italy.

The most promising player of the 1983-84 season in the 1st division, Paul Walsh, had been bought in May for 700,000 pounds, midfield maestro Jan Molby from Ajax for 225,000 pounds and midfielder Kevin MacDonald from Leicester. Fagan's buy from the previous season, John Wark came into his own and was the season's topscorer at Liverpool. Liverpool's start was terrible. As if Souness' absence from midfield wasn't bad enough, goalmachine Ian Rush didn't feature until October because of injury. At the end of October the European champions were in 20th place, only two places from rock bottom (2 wins - 5 draws - 4 losses). Liverpool had moved to 10th in December, but in the end couldn't catch Everton who won the title by a mile. Liverpool came 2nd. Liverpool reached the European final again. A big occasion for Fagan as he had decided it was his last match in charge. He told his players simply before the game that after the match they could call him just Joe instead of Boss.

Hooliganism destroyed this great occasion and it was on a sad note Fagan retired. When he came out of the airplane from Brussels, his sadness was for everyone to see. The great gentleman cried on Roy Evans' shoulder. He was already 62-years-old when he took the job and had intended to stay only two years in the managerial seat.

One of Fagan's signings, Republic of Ireland international Jim Beglin said: "He was just a very genuine nice man. He was a very humble, down to earth person. He had a lovely way about him and was very gentlemanly. Underneath that soft exterior, there was also a hardened professionalism. Joe had authority and when strong words were needed, Joe could produce them."

The Blues rush in where Souness used to tread

The Heysel disaster seen by the eyes of the Guardian.

Paul Tomkins's latest book, Dynasty, is a reassessment of every manager of the club over the last 50 years.

Wayne Harrison - When another teenager's dream ended in heartache

New book on Joe Fagan relies on the meticulous notes Joe maintained and the painstaking way his grandson Andrew and respected LFC author Mark Platt have pieced together the jigsaw of his remarkable life.

28 years ago today Joe Fagan stepped down as manager of Liverpool Football Club after 25 years of service.

The one-time Liverpool manager deserves more acclaim having won three major honours in his first season in charge of the club. From the Guardian on 19 September 2013.

I don't know what it is but I love it: Liverpool's Unforgettable 1983-84 Season

LFChistory had the rare opportunity of spending an evening with Michael Robinson, a warm individual who possesses such an abundance of intelligence and enthusiasm towards sport and life in general.

"Joe was what I would describe as a genial man who, even before he got the job which he inherited from Bob, was always extremely well respected and liked by the players. He was very thoughtful about his football, very approachable as a coach and a manager.

"The biggest tribute I could pay to him would be when he got the job I think every single man in the first team squad were desperate for him to be successful. He was following a formidable act in Bob, and I think one or two different people outside of Liverpool thought maybe it was going to be too difficult an act to follow. He was brilliant and the nicest thing I can say is everybody in the first team dressing room really, really wanted him to be successful, and that was obviously reflected in his first season."

"It is sad because Joe Fagan was the perfect gentleman as well as being a top coach. He was a really nice down to earth man and I felt when he was coaching he knew how to handle players, but when things weren't going well he knew when to put his foot down and he was quite hard.

"People feel Joe Fagan made a mistake buying me but I’m determined to make them eat their words!"

"You may have found me mean and thirsty in my search for trophies, but the bad news is the man who is taking my place is hungrier than me. Fagan's the name and I don't think he'll need any help from the Artful Dodger!"

"He was just a very genuine nice man. He was a very humble, down to earth person. He had a lovely way about him and was very gentlemanly. Underneath that soft exterior, there was also a hardened professionalism. Joe had authority and when strong words were needed, Joe could produce them."

"Keep it simple, don't complicate things. He loathed all soccerspeak; he wouldn't have recognised a Christmas-tree formation if it had toppled on to him. "What does getting round the back mean?" he would ask. "We're not talking about burglars are we?"

Expressed by one of his most loyal lieutenants, Joe Fagan, Bob Paisley's soccer credo amounted to this.

"The other thing I remember about that drawn cup derby was Joe Fagan pulling me aside afterwards and mentioning something that happened with Duncan McKenzie.
‘Tommy’, he said, beckoning me to him.
‘What is it Joe?” I asked.
“The winger . . .”
“Yes, what about him?”
“He nutmegged you, didn’t he?”
I just looked blankly at him.
“Won’t happen again, will it?” he frowned.
It didn’t.
A nice early tackle in the replay saw to that!"

Tommy Smith on Liverpool's and Everton's cup fight in April 1977

"‘Joe, I’ve been here a week and no-one has said anything to me. How does the manager want me to play?’ So Fagan raised his voice to ensure the whole dressing room could hear and replied: ‘F*** off! We spent all this money on you and now you’re asking me how to play football!’"

Graeme Souness was about to make his debut for Liverpool at West Brom when he leant across to Bob Paisley's assistant, Joe Fagan, asking apparently a rather stupid question. From Graham Hunter's interview with Souness. 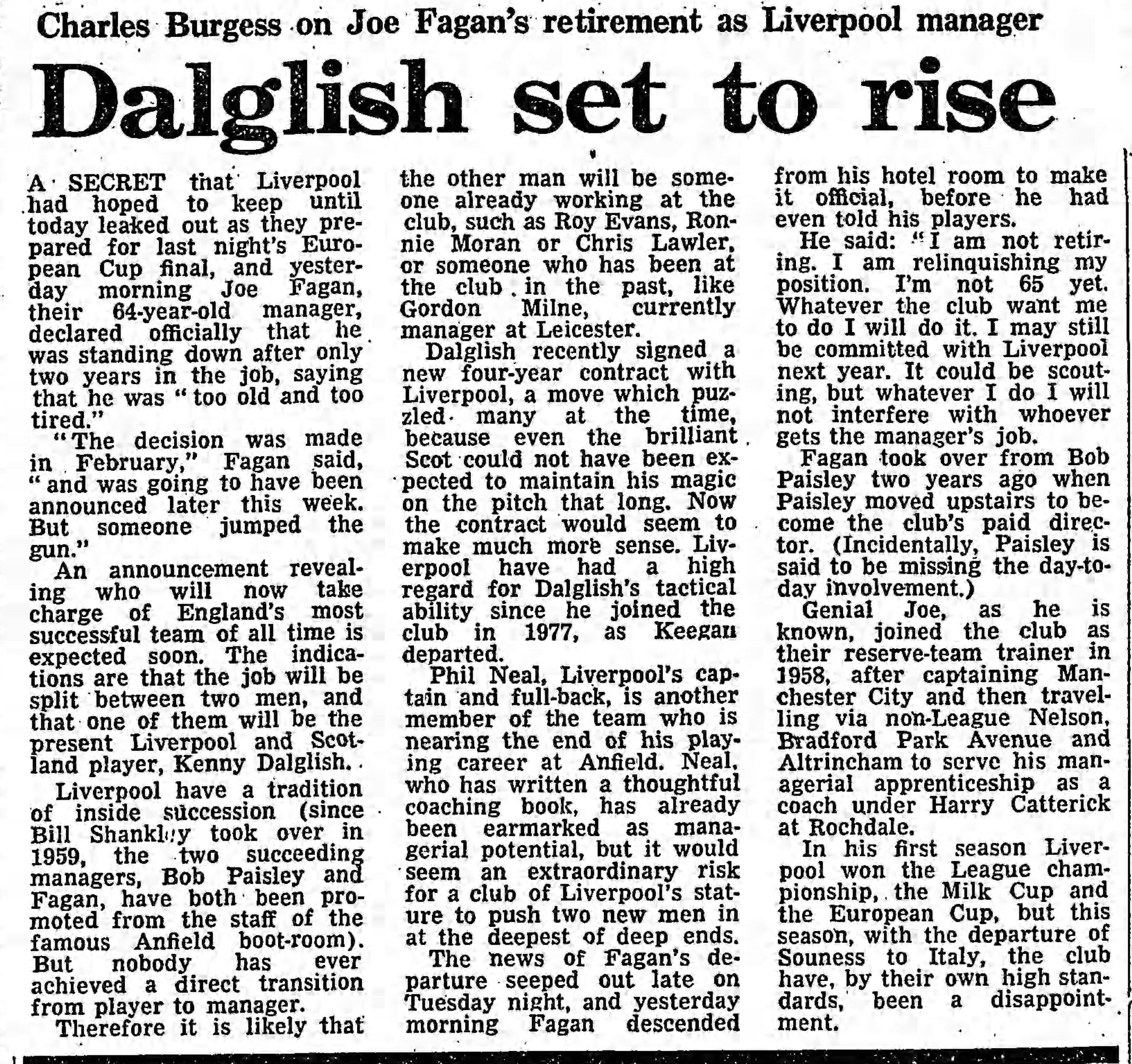 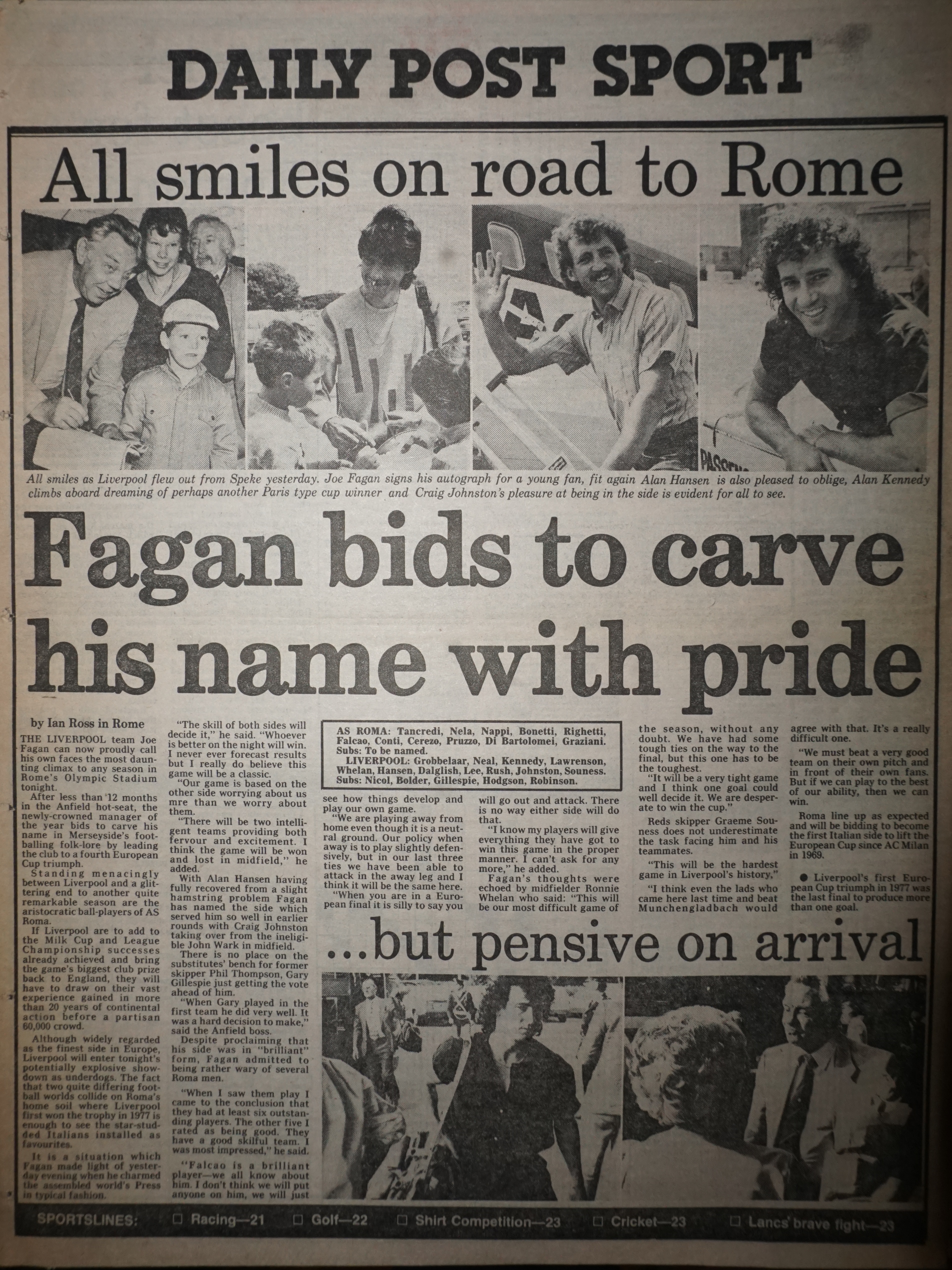 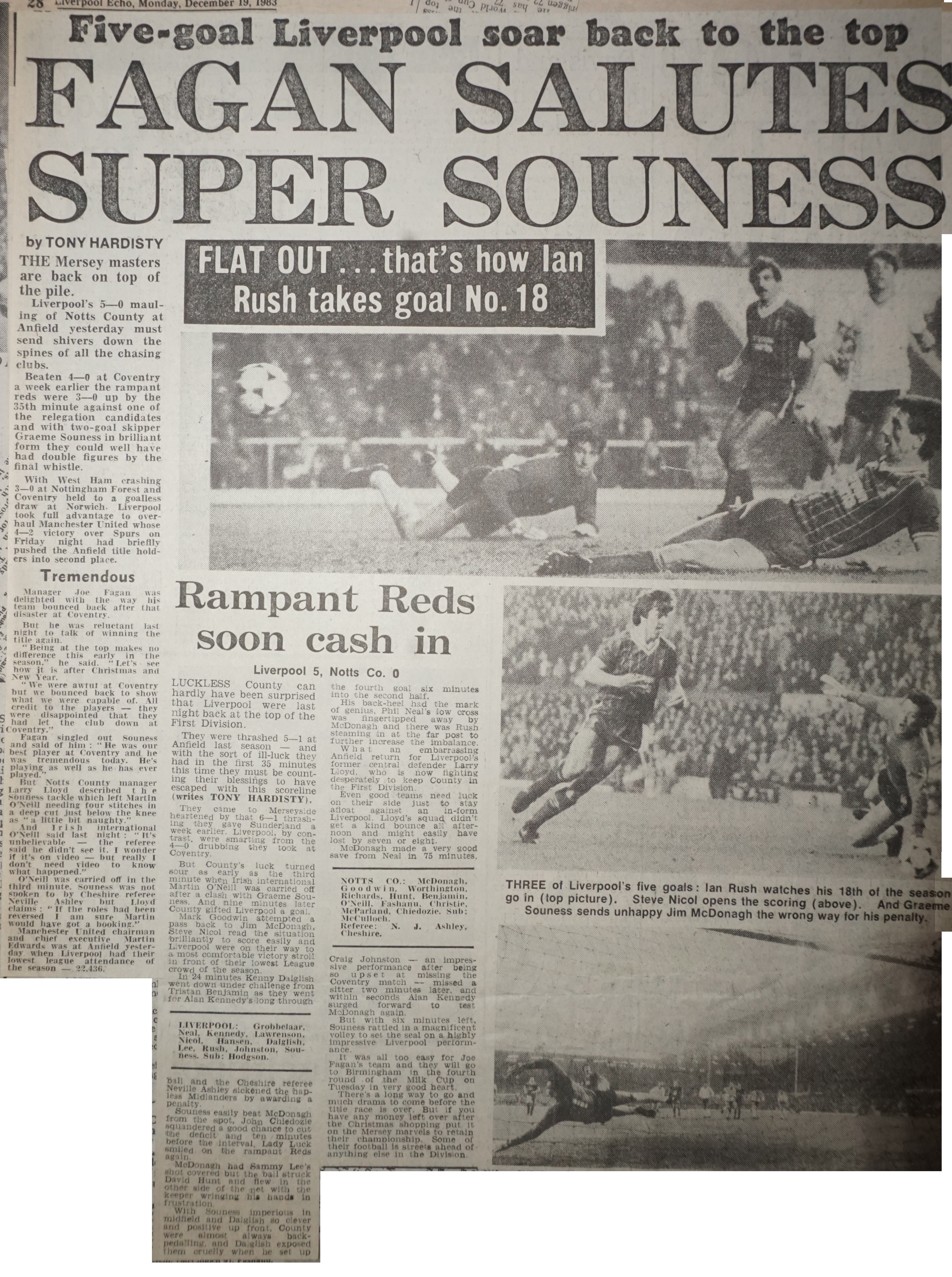 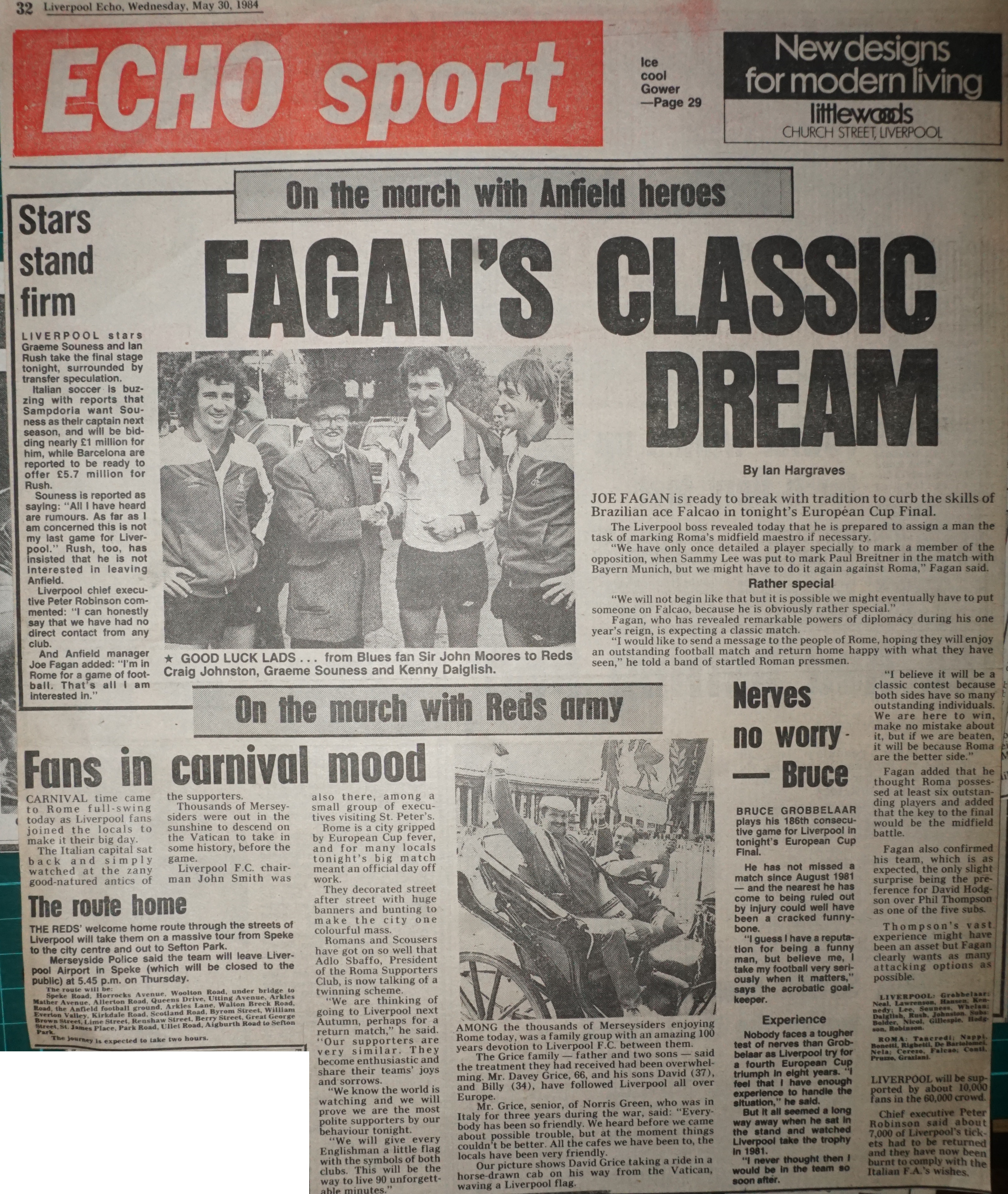 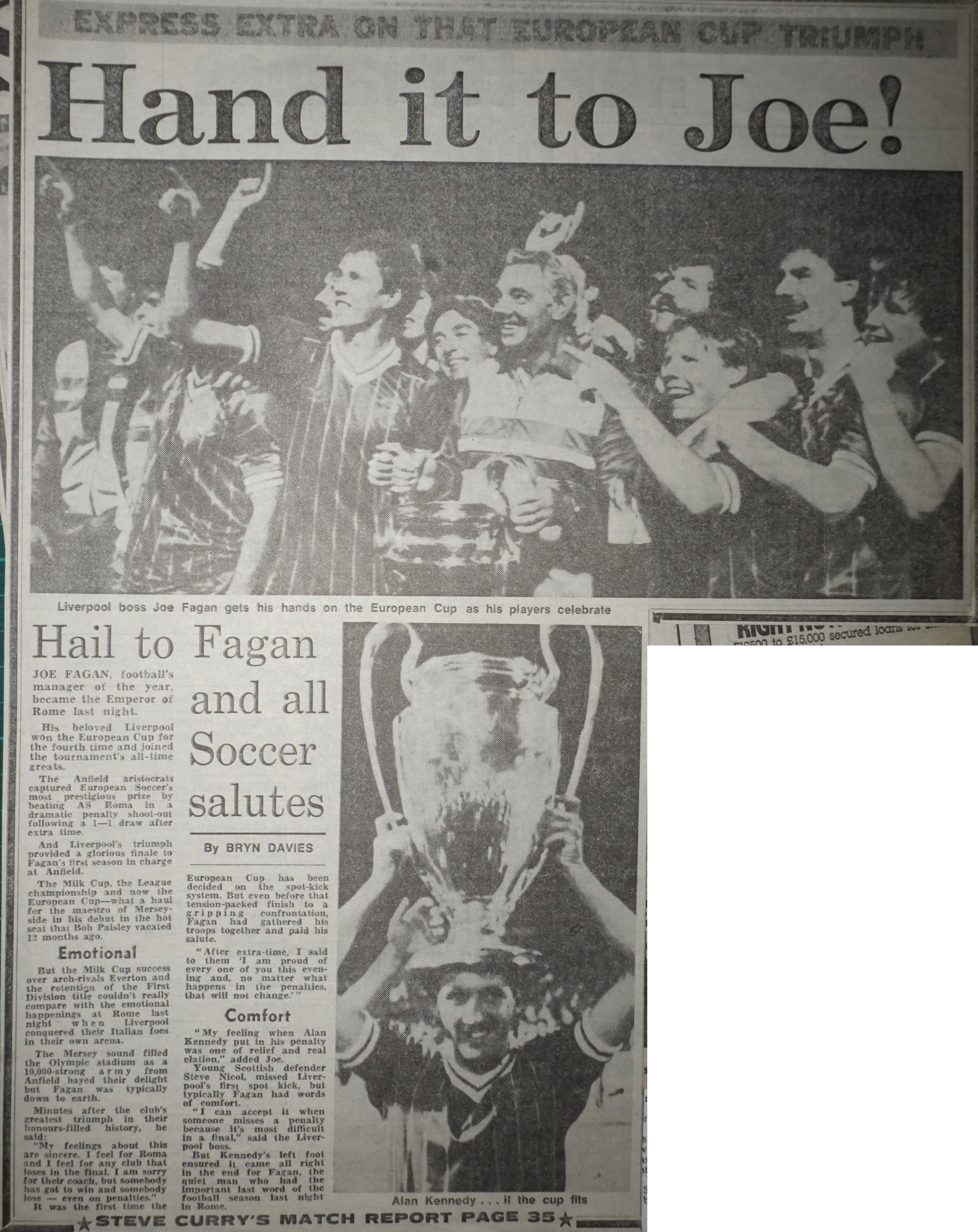 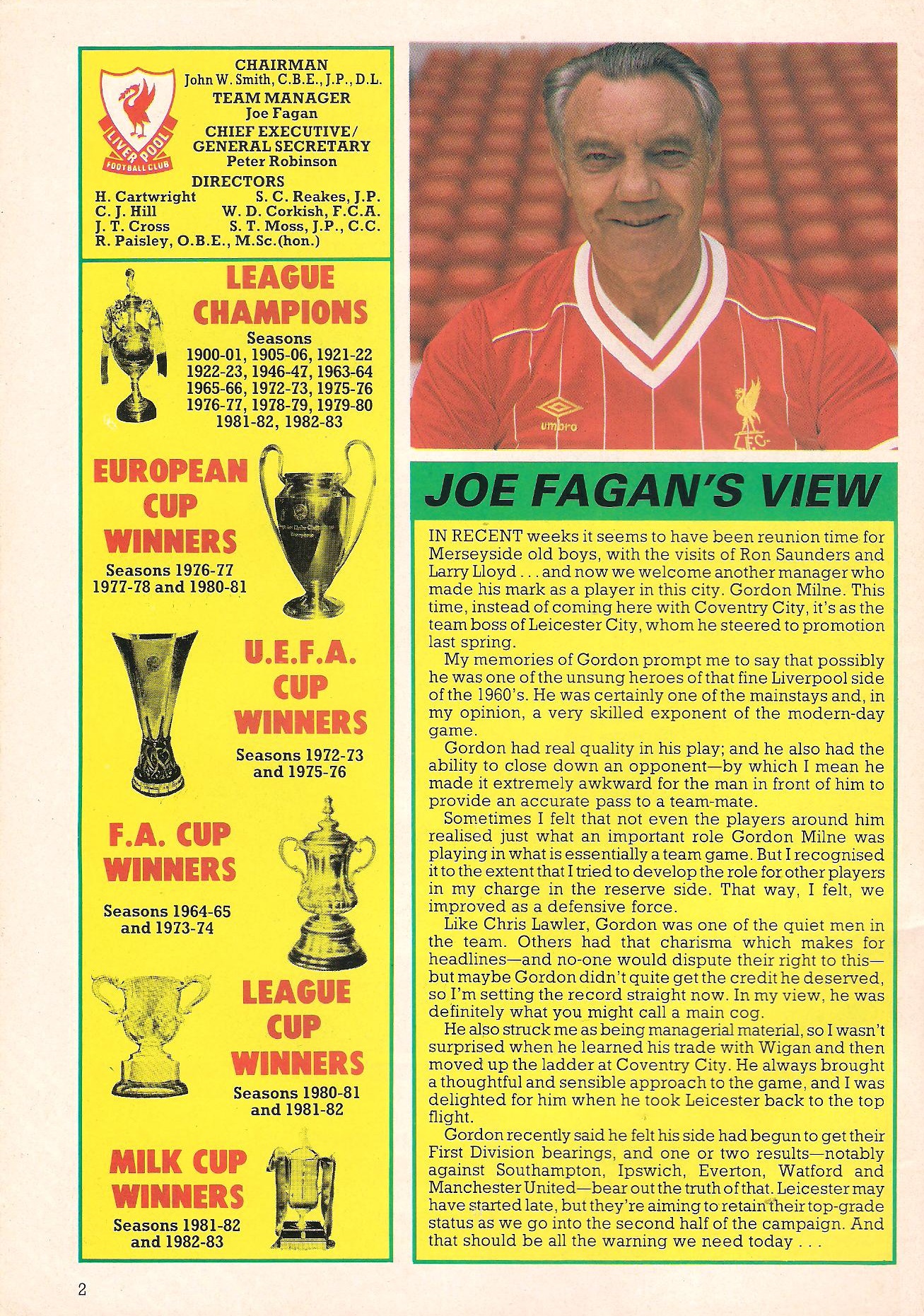 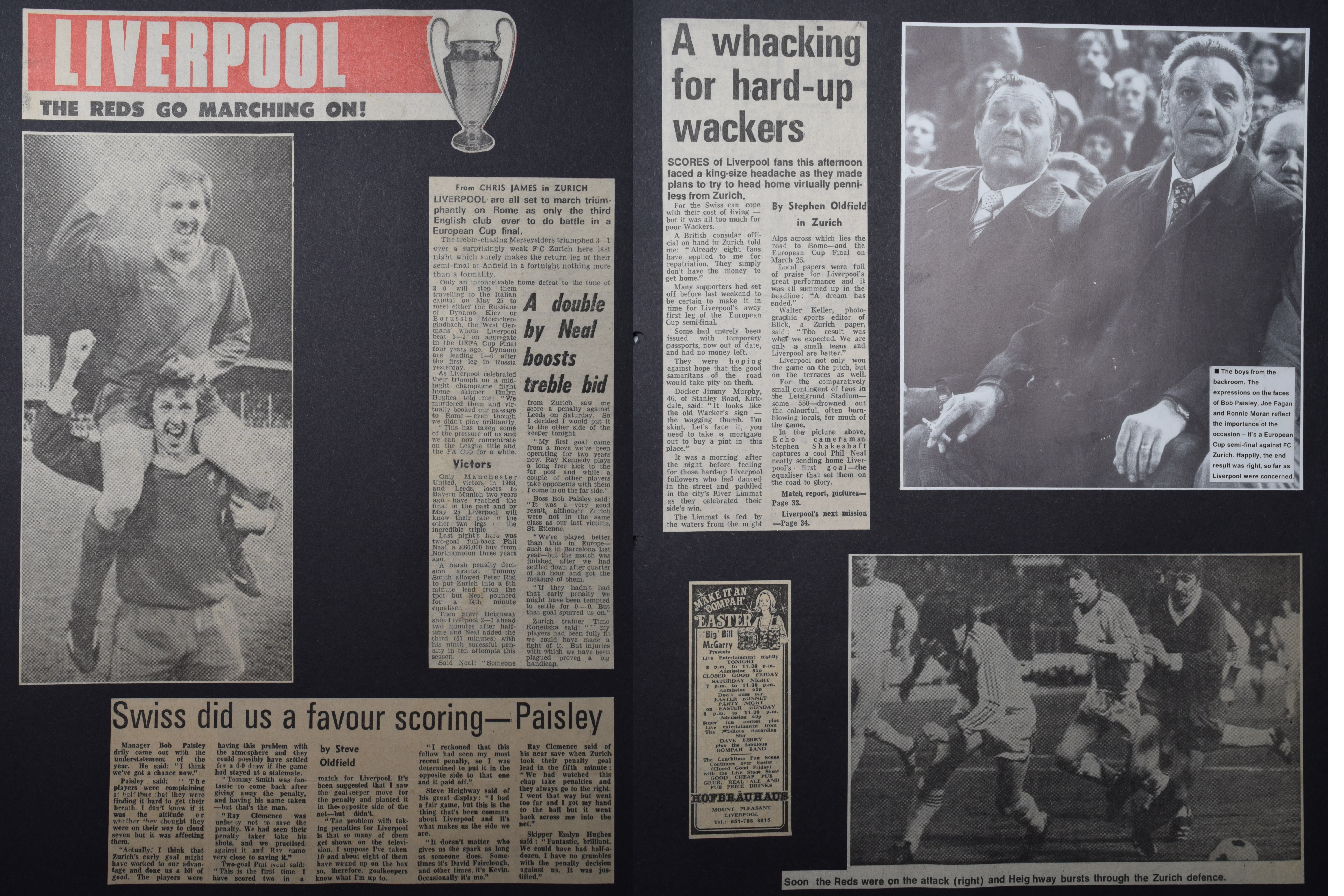 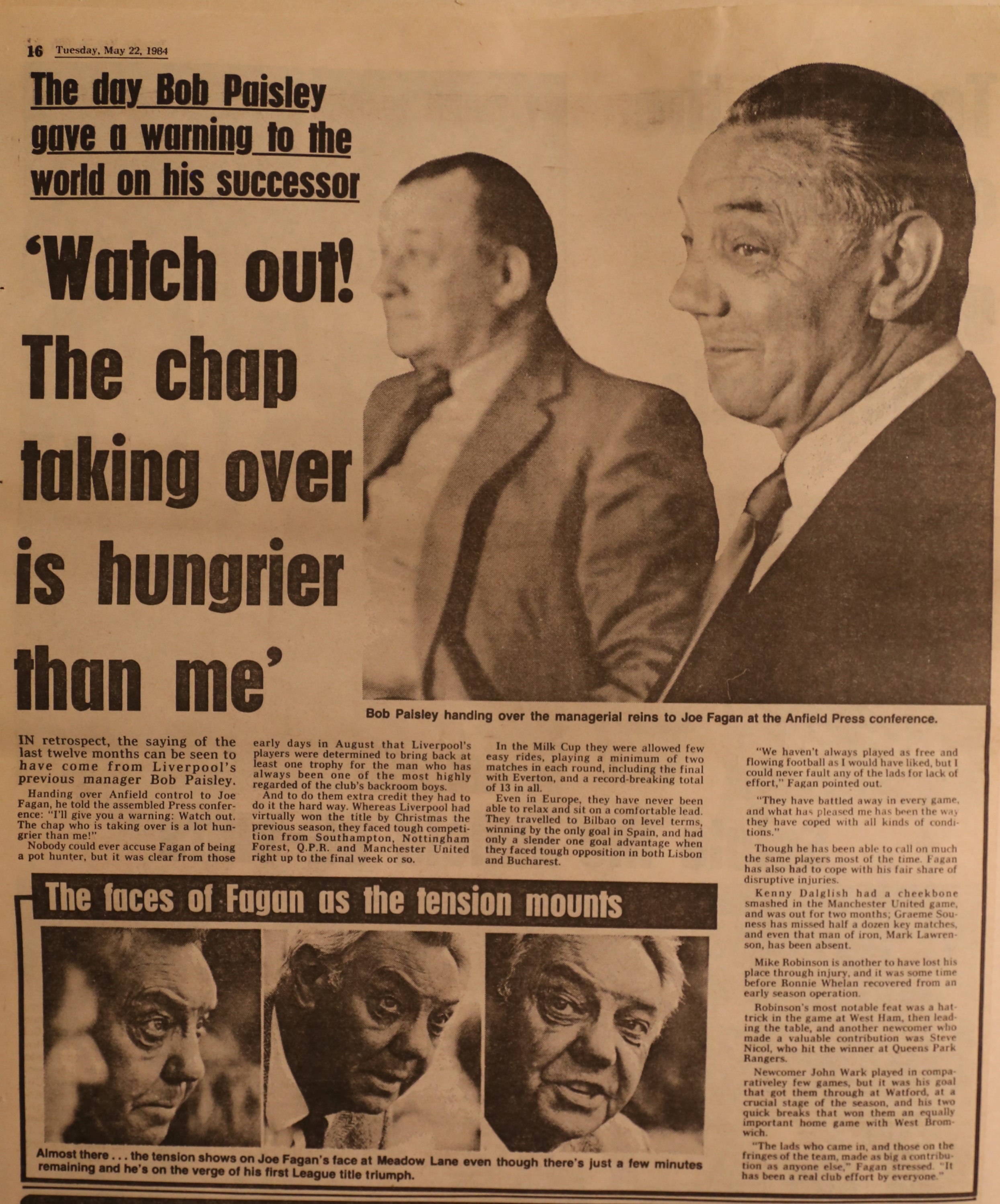