I don't know what it is but I love it: Liverpool's Unforgettable 1983-84 Season 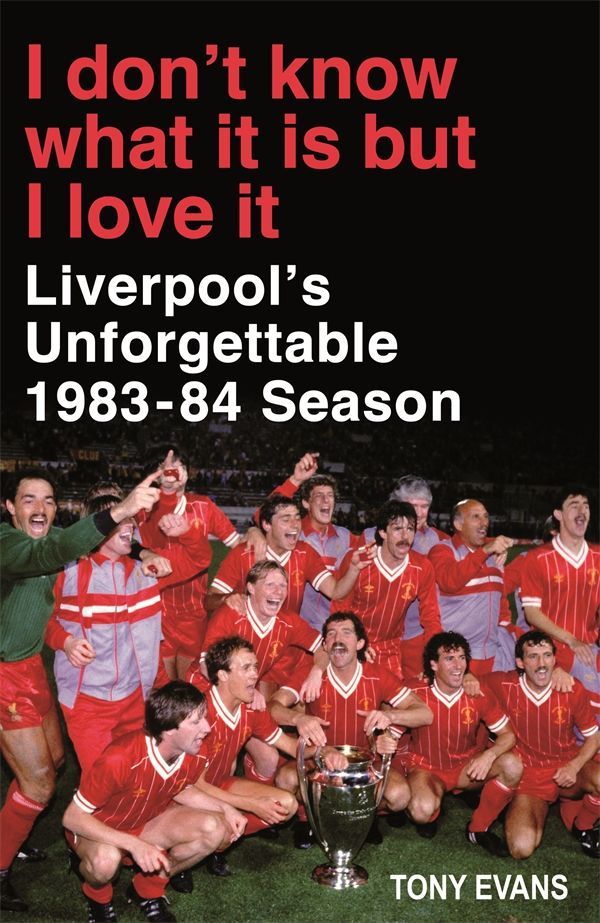 By Tony Evans
Published by the Penguin Group
Dealing with it first and for those that aren’t aware of it, the title of this book comes from the Chris Rea song that was fearlessly bellowed out by the Liverpool players right in the faces of the Roma team as the two sides waited in the tunnel before walking out one spring evening in Italy to decide the outcome of the European Cup. Singing this in Rome was a reminder of the close bonding the players had enjoyed during their pre-final jaunt to Israel, where the song had been adopted as a kind of anthem by the Liverpool players as the season reached its finale.

Seven football clubs have faced the herculean task of having to play a European final at the home stadium of its opponents. Only three have been successful. This is the story of the first club to achieve that almost impossible against-the-odds task. It is very, very rare. But this is more than just the story of one cup final. The success of a football club’s season is usually judged by the trophies that have been won by the end of it. That isn’t always a true reflection of the way a team has performed but, because there are so few trophies to be handed out annually, it is usually a fair reflection. If your history is as full of trophy-winning seasons as Liverpool Football Club’s is, there are many to choose from and there will always be arguments about which was the best. Was the 1978-79 team better than the 1987-88 team, for example ? The passing of time means that success in the tangible form of trophies can often become just a year in the printed Honours’ List of a club in its home programme or the fading memory of an older supporter who lived through the time. Thankfully in Liverpool’s case a number of these trophy-winning seasons have been brought to life vividly in book form in recent years : At The End Of The Storm, Gary Shaw & Mark Platt, 1946-47; We Love You Yeah Yeah Yeah, Steven Horton, 1963-64; Ending The Seven-Year Itch, Steven Horton, 1972-73; On The March With Kenny’s Army, Gary Shaw & Mark Nevin, 1985-86; The King’s Last Stand, David Usher, 2011-12. Tony Evans continues this literary trend with a fascinating look back at a season (1983-84) in which Liverpool won three major trophies. As well as being respected as one of the finest sportswriters of his generation, Tony also writes with the authority of a supporter who attended a very high percentage of the club’s sixty-seven competitive matches during this record-breaking nine-month period.

Changing a manager can be an awkward time for a football club, especially if that manager has been successful, because clearly the club will want that to continue. Bob Paisley’s success following Bill Shankly was unprecedented but Paisley gave a full season’s notice of his intention to stand down whereas Shankly’s resignation/retirement had been a shock to all. So successful had Paisley been, not just domestically but on the continent as well, that the Liverpool job became “the vacancy almost everyone in football would have killed for”, which is why it was hugely ironic that the man who took it, the loyal Joe Fagan, did not really want it at all, believing that his strengths lay in coaching. The players Joe inherited, however, were happy enough : “Everyone respected and believed in Joe”, declared Kenny Dalglish.

Tony Evans’ account of this extraordinary season starts and ends in Israel, where the Liverpool squad was spending several days out of the two weeks that separated the final league match and the European Cup final. There were no curfews or restrictions imposed on the squad during this break with the players’ antics being watched with growing incredulity by a number of Italian journalists who knew that the Roma squad due to face Liverpool in the final was safely locked up in their own training-camp in the Dolomites, where there would most certainly be rules to obey. Surely this was no way to prepare for such an important match ? These journalists and indeed many others expected to shortly see “the public execution of a football dynasty witnessed by a global audience”. The Liverpool players’ behaviour in Tel Aviv was so extreme that one of the club’s directors, Sydney Moss, was forced to intervene when told that trouble was brewing in one of the city’s squares and went to investigate himself, only to discover that the “alcohol-fuelled boisterousness” was being caused by the club’s players not its supporters. Australian midfielder Craig Johnston, who had many run-ins with the new manager during the season about his absence from the team, described the Israel trip as brilliant and confessed on behalf of the players that “we hit the bottle as soon as we got there. It was a wild few days”. Johnston and other ex-players in this book talk fondly and frankly about the fantastic team-spirit that was present on bonding exercises like this even though it is clear that Craig was wary of the Scottish influence in the dressing-room because “the Jocks kept everyone in line” and “were always having a laugh at someone else’s expense”, often his own or the affable Steve Nicol’s. A lady who often socialised with the Liverpool players of this era declared about this tight-knit group : “They knew how to have fun but they knew how to win” and that is what this group became as the season evolved, a team of winners led by the man who had been given the captain’s armband by Bob Paisley as 1981 turned into 1982, Graeme Souness. Phil Thompson was devastated to lose the skipper’s role he had been so proud to hold; and although he did not move on to Sheffield United until late in 1984 he would suffer more acute disappointment right at the end of this eventful season by being the only one of the seventeen players who travelled to Rome not to make the match-day squad for the European final, a terrible blow for the club’s most senior player at the time.

Making Graeme Souness the captain had been a stroke of genius because he was respected as well as feared by opponents who knew that he would not hesitate to look after himself as well as his team-mates. That charismatic football journeyman Frank Worthington once described Souness as “the nastiest, most ruthless man in soccer. There is a streak in him that puts him top of the list” but even those comments show grudging respect. You crossed Souness at your peril. He would not be slow to react when provoked, something Dinamo Bucharest captain Lică Movilă could testify to after the Scotsman broke his jaw during the Anfield leg of the European Cup semi-final. Unpunished by the match-officials at the time or retrospectively, Souness was heavily targeted in the second leg in Romania but managed to keep his temper under wraps and dictate the play in his own way in one of his finest-ever performances with a Liver bird upon his chest. It wasn’t a coincidence that this Liverpool team won all four away legs en route to the European final. This was a team with a supreme confidence in its own ability and an unswerving conviction that they could beat anyone, anywhere. There were defeats, of course there were. Even the greatest individuals and teams in sport have days when things don’t go according to plan. None more so in this Liverpool season than the 4-0 mauling they took at Coventry in December, a horrible and unexpected loss that was rectified when the club from the Midlands was put to the sword 5-0 when they came to Anfield in May.

In terms of its length this season was almost as long as another championship-winning season, 1946-47. That first full season after World War Two started on the last day of August and finished on the last day of the following May. 1983-84 started with the Charity Shield at Wembley on the 20th of August and ended with the European Cup final on the 30th of May. The difference lies in the number of competitive matches … forty-eight in 1946-47 compared to sixty-seven in 1983-84. So many cup-ties in the Treble season (24) meant that Joe Fagan had to make full use of his squad even though respected administrator Peter Robinson had declared in the summer of 1983 that “our present squad is dangerously small”. Although Michael Robinson arrived from Brighton at the start of August, Ronnie Whelan missed a large chunk of the season while recovering from an injury, inspirational captain Souness missed four consecutive matches in February also through injury and the talismanic Kenny Dalglish received a horrendous facial injury on New Year’s Day from which he made a recovery so remarkable that when he trotted out at the start of the second half against Benfica in the European quarter-final at Anfield in early-March it gave the crowd and his team-mates a massive lift. Kenny’s return was “timed to perfection” and “pure theatre”. Bringing him back into action when he did was a no-risk situation for the manager because “Kenny’s presence could visibly raise his team-mates’ performances”.

Tony Evans goes through everything very neatly in chronological order from pre-season preparations to the post-season trip to Zimbabwe where the new European champions played Tottenham Hotspur twice in exhibition matches. I was slightly disappointed that there were no photographs to support the story, even though there might not be much that has not been seen already. Tony’s knowledge about Liverpool Football Club is immense because he is a supporter as well as a sportswriter. I was therefore rather surprised to find a few factual errors that frankly a man of his knowledge (or his researchers/proof-readers) ought to have spotted. Alan Kennedy did most definitely not score in a Wembley League Cup final against Tottenham Hotspur; and Ian Rush’s one-man demolition of Everton at Goodison Park took place in November 1982 not 1981 (the correct year is shown though when the same match is referenced fourteen pages later). But such errors are thankfully rare and certainly much fewer than in most football books that tell the story of a season the way this book does. Mister Evans has an excellent writing-style and he has clearly researched this book meticulously by tapping into the memories of many of the men who were at the heart of this amazing story. As you read, as this journey to glory continues to its climax, the words flow so well that it is easy for the reader to imagine that he was right there in the middle of it as well. That is a rare gift that the majority of writers can’t capture. But Tony Evans captures it and he does so well.

Nobody knew at the time this memorable season happened that seventeen years later a different group of Liverpool players would also collect three trophies in one season. Apart from in the 2011 book Joe Fagan: Reluctant Champion I don’t think this historic 1983-84 season has been dissected in such a detailed way before. That it has now can only be to the benefit of the many, many Liverpool supporters who will read this wonderful account of how a rookie manager, despite years of experience away from the limelight, led a group of resilient and determined young men on a journey that even thirty years later is still pretty hard to take in.