A tireless runner who gave always 100% for the team. Born in South Africa but brought up in Australia, Johnston was confident enough in his own ability to write to several English clubs as a 15-year-old asking for a trial. Middlesbrough were the only ones that replied so he borrowed the £632 return air fare from his father and was signed after a four-month trial. It could have been so different as he told Shoot! in 1978. When Johnston was only six he got a kick on the leg and suffered from a bone disease. A doctor recommended an amputation of the left leg. "I still remember the horror I felt. Fortunately an American specialist saved my leg," Johnston recalled. When he was 14 there was a recurrence of leg trouble and he was advised to pack up football. After his first trial game, Boro manager, Jack Charlton, told Johnston to go back to Australia on the first plane because he would never make a footballer in a million years. Graeme Souness, whose number four shirt Johnston inherited when the Scot went to Liverpool, gave the Australian great support and with typical dedication Johnston set about to prove Charlton wrong. Thankfully Charlton was soon on his way out replaced by John Neal who gave Johnston his breakthrough in the First Division in the 1979/80 season.

Johnston signed for Liverpool in April 1981, still only 20 but with over 60 League appearances to his credit already. When he watched his new club win the European Cup in Paris only weeks after his arrival at Anfield, he must have dreamt of being part of similar success. After being substitute in three of the first four League matches, he had been largely overlooked since then in the 1981/82 season. His fortunes started to change on a freezing December night when Arsenal visited Anfield for a fourth round League Cup replay. His first goal for the club five minutes into extra-time helped see the Reds through to the quarter-final, although Johnston failed to play any further part in the competition as his team went on to retain the trophy. But he did contribute six goals as Liverpool regained the League Championship from Aston Villa. He quickly became a crowd favourite because supporters recognised that he would run until he dropped and his courage and strength were never in doubt. He would himself admit that he lacked a certain finesse to be a top player and just ran around the field like a "lunatic".

When John Wark arrived Johnston lost his place in the starting line-up following a win in the replay of the League Cup final against Everton in March 1984. Wark was ineligible for the European Cup as he hadn't signed before the UEFA deadline so Johnston featured in the successful European Cup final in Rome. When Joe Fagan stepped down after two seasons in charge, Johnston was given fresh hope and encouragement from his former teammate Kenny Dalglish. "Craig was his own worst enemy," Dalglish said. "He just didn't believe in in his footballing abilities, and I could see that, when his form deserted him, Craig became depressed and the dark cycle continued. Several times during the season I had to beat away this black dog of depression chasing Craig." Johnston played 61 games in the 'Double' season of 1985/86, again reaching double figures in the scoring stakes. The joy of scoring in an FA Cup final was plain for all to see as Johnston netted Liverpool second in a 3-1 win over Everton at Wembley. "At least Liverpool had one magnificent season out of Craig Johnston," Dalglish concluded.

After a promising start to the following season, the recurrence of a back injury kept him on the sidelines. But worse news was to come that Christmas. His younger sister, Faye, nearly died in a gassing accident caused by a faulty heater in her hotel room in Morocco and he rushed immediately to be at her side. All this was kept from the press at the time and of course the supporters had no idea of the tragedy that was unfolding in his private life. His mind was obviously on other things and although he never gave up when he had a Liverpool shirt on, it was clear and natural that his family came first. Further injuries meant a reduced number of appearances in 1987/88 and he left England after the best-forgotten Cup Final against Wimbledon to return to Australia to care for his sister, who was brain damaged as a result of the gassing incident. Years after he quit Liverpool he was continually being linked with top clubs. He made one thing clear at the time to Liverpool fans all over the world that he would only return for one club: "I'd never play for anyone else than Liverpool. The only other team I'd play for would be Liverpool reserves!"

A year later, devastated by what had happened at Hillsborough, he not only raised £40,000 in his own country for the families of the 96 but also willingly flew half-way across the world to attend the memorial service at Anfield seven days after the disaster and stayed on to help counsel the bereaved families, a wonderful gesture which endeared him to Liverpool fans everywhere. Johnston is a true entrepreneur. He designed the Predator football boot, his own brand of surfboards, became a full-time photographer, was a music producer, etc.... his list of accomplishments is endless. The title of his autobiography "Walk Alone" was apt because in many ways he was a refreshing change from the 'typical' professional footballer. And the fact that his book was dedicated "In Memory of the Victims of Heysel and Hillsborough" showed how much he cared about the community that had accepted him as one of their own and who will always have fond memories of a player who ran himself into the ground for the Liverpool cause. "I loved playing for Liverpool, especially the atmosphere in the city. It was a place where one minute a total stranger would come up to me, hug me and say I love you, and five minute later someone would wind down their car window, give you the finger and shout I hate you!"

Johnston stays humble about his Liverpool career, maybe a bit too humble: "You have no idea how crap I was. Even when I was playing for Liverpool, I was the worst player in the best team in the world."

Craig Johnston has bounced back from bankruptcy to forge a new career as a photographer. From Daily Telegraph on 2nd March 2010.

When Johnston thought he was on his bike

The boy Down under is in the spotlight in Shoot! in 1982.

"He's a lad who actually enjoys running. He's like one of those toys with the long-life batteries. You just switch him on, put him down the pitch and watch him go! Our Anfield Aussie has had a crack at just about everything. He's an avid photographer, he takes guitar lessons, he's learning an extra language, he's written a song and directed a video to go with it. I'm half expecting to into training one morning and tell me he's just come back from the moon!"

"The only regret I have is that I didn't reach my full potiental. I always aim high. There's no point in doing something by half. When I went to England I didn't want to play for just any club. I wanted to play for Liverpool."

"You have no idea how crap I was. Even when I was playing for Liverpool, I was the worst player in the best team in the world."

"In my first youth team game, we were playing Leeds United and we were losing 3-0. The manager at the time was Jack Charlton and in the dressing room at half-time he was seething.

He had a go at everyone and then he said to me: 'And as for you, you kangaroo, you can fuck off right now'."

I burst into tears and that night I packed my bags. Then I phoned my mum and I couldn't tell her the truth because my parents had sold the house back home to pay for me to come here."

Johnston struggled at Boro after he made the long trip from Australia to England, but his training sure paid dividends.

"It came to a simple choice: either learn the game properly or get the next flight home. I would get garbage cans and put them in a row and run through them with a ball in 10 seconds. If I touched a can, I would start again.

I would put on a blindfold and sense the football with my feet as I dribbled. I put two small crosses on the wall and hit them with my left and then my right foot. If I was good and concentrated hard it would take me three hours. If I was poor, it would take me six hours."

"Graeme was my hero at Boro. He used to look after me as one of the boys and I’ll always be grateful to him. When he was transferred to Liverpool he even fixed up for me to have his digs at Middlesbrough. You can imagine how I felt when I succeeded him in the no. 4 shirt at Ayresome!"

Craig Johnston on Souness in 1982 A big poster of Johnston from Match 1983 A life full of drama for Boro's Johnston Craig Johnston in action in the 1986 FA Cup final 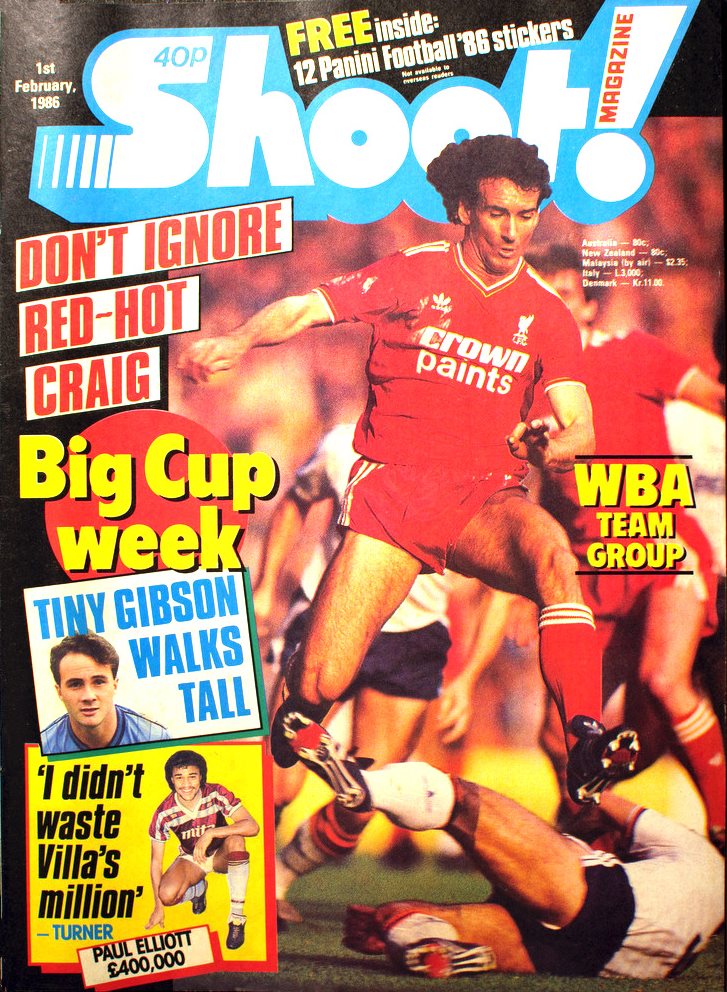 Craig Johnston on the cover of Shoot! 1 February 1986 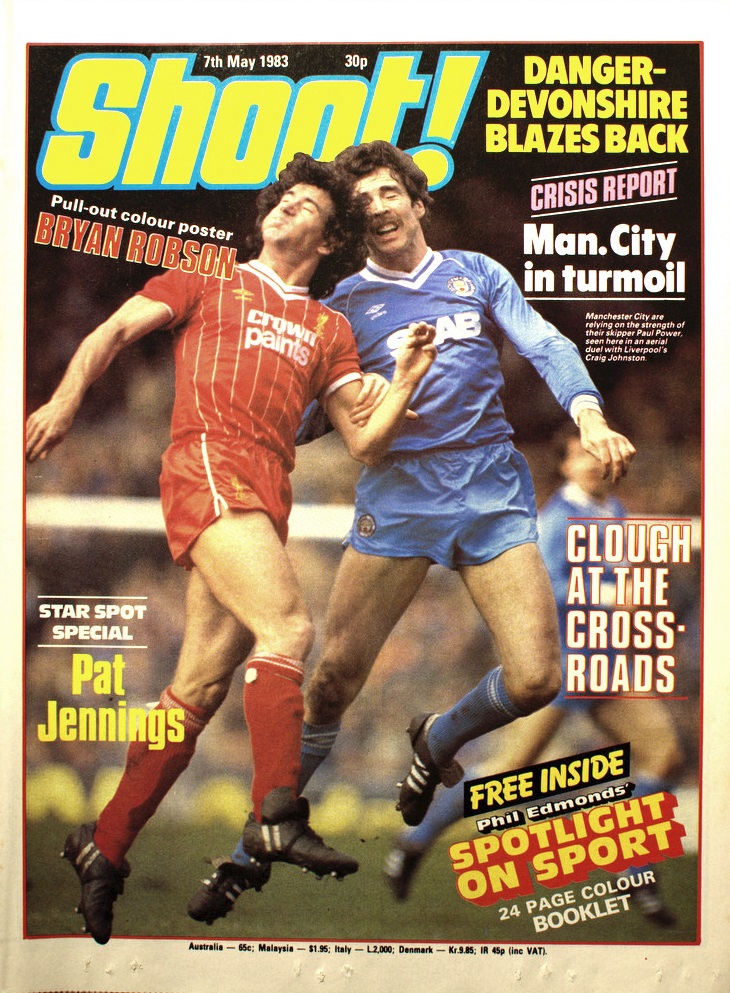 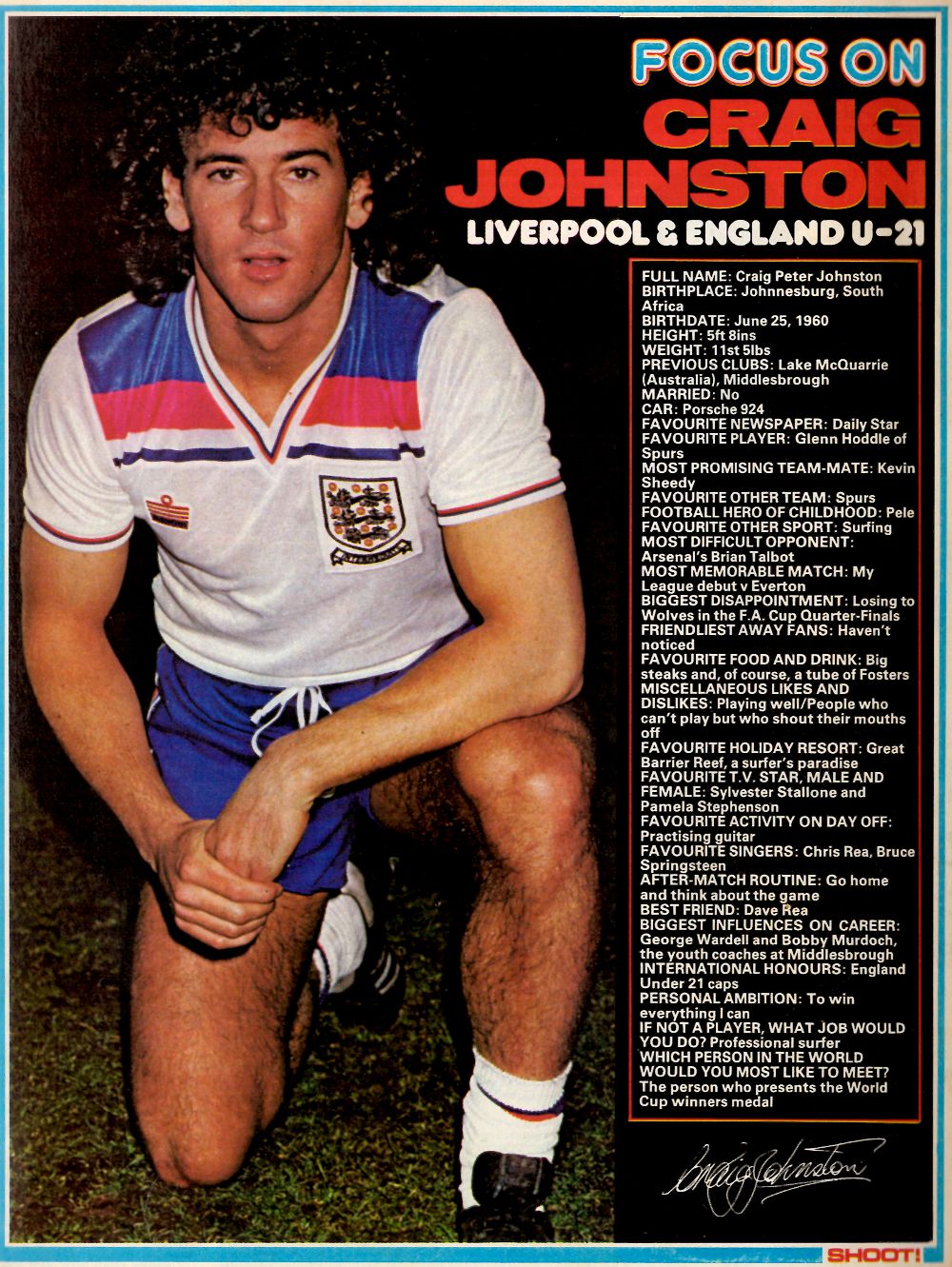 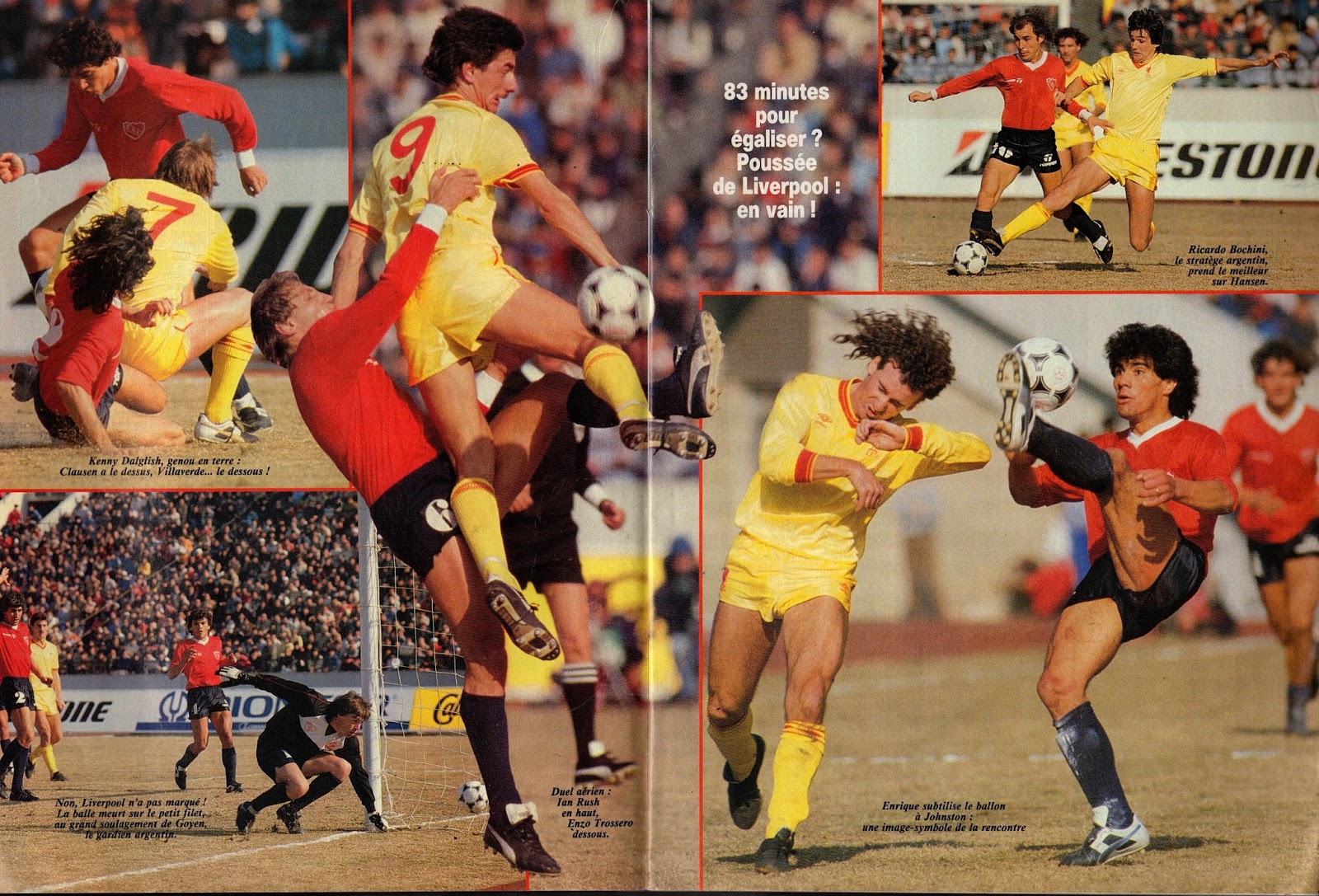 In action versus Independiente 1985 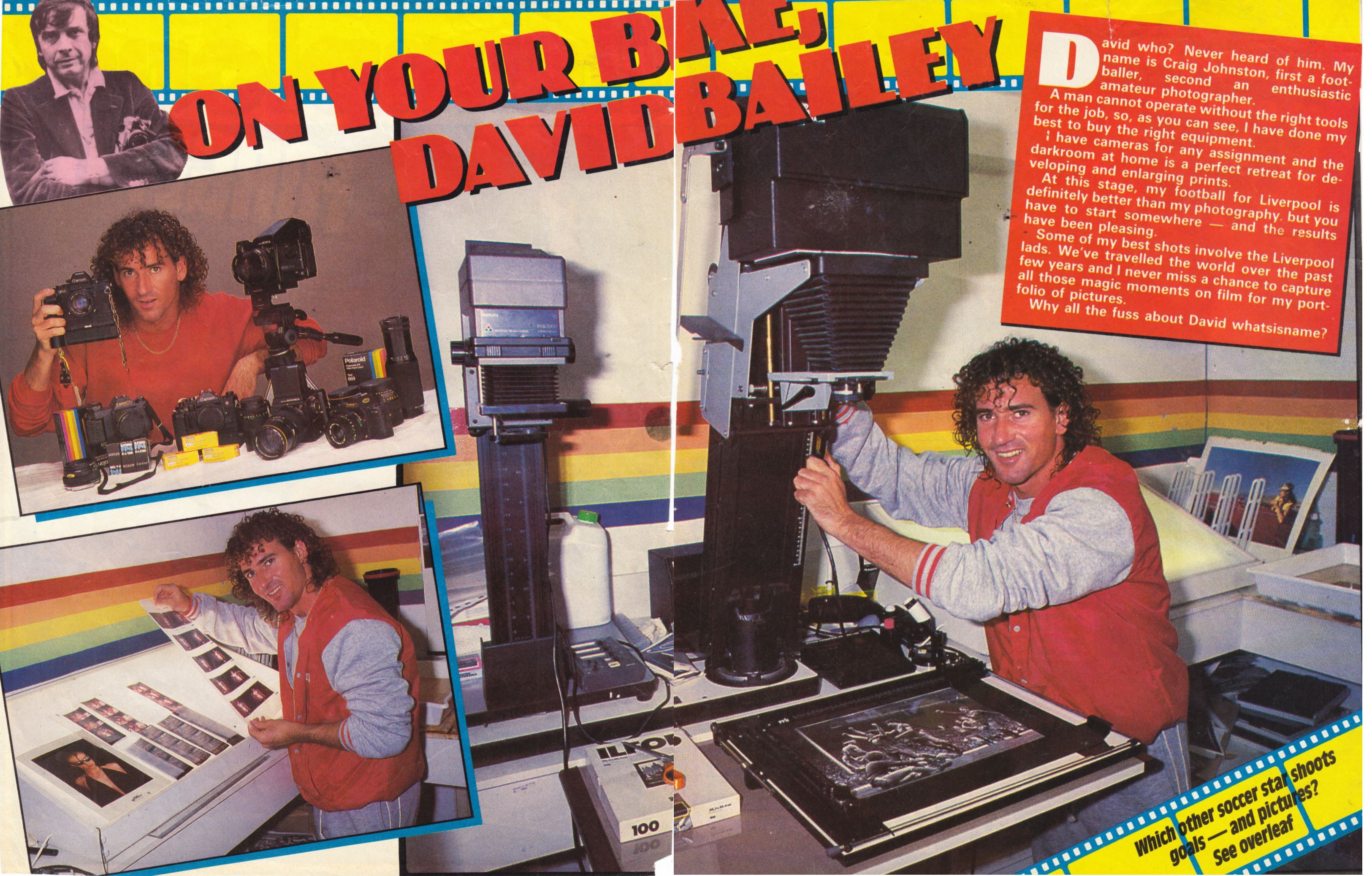 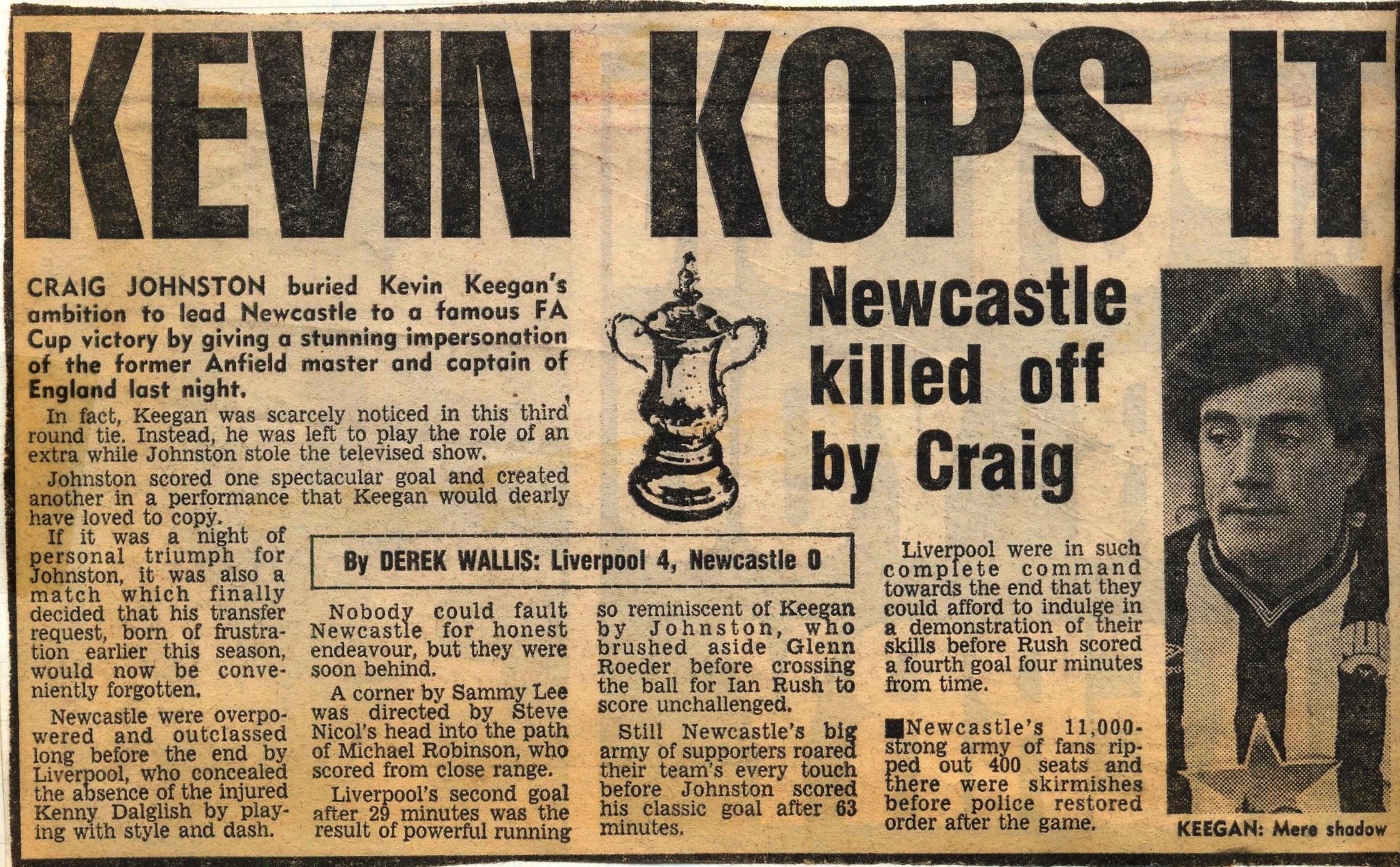 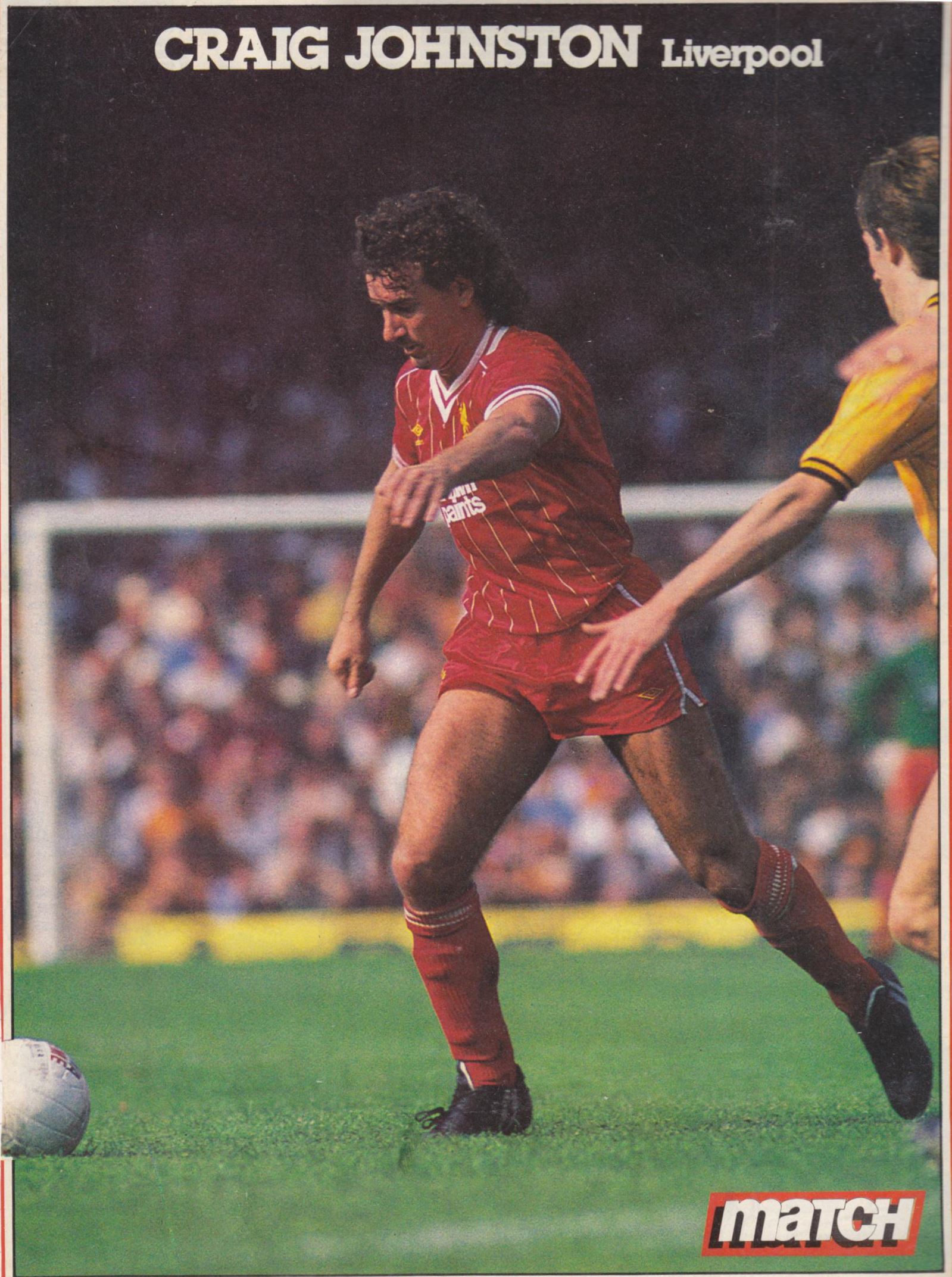 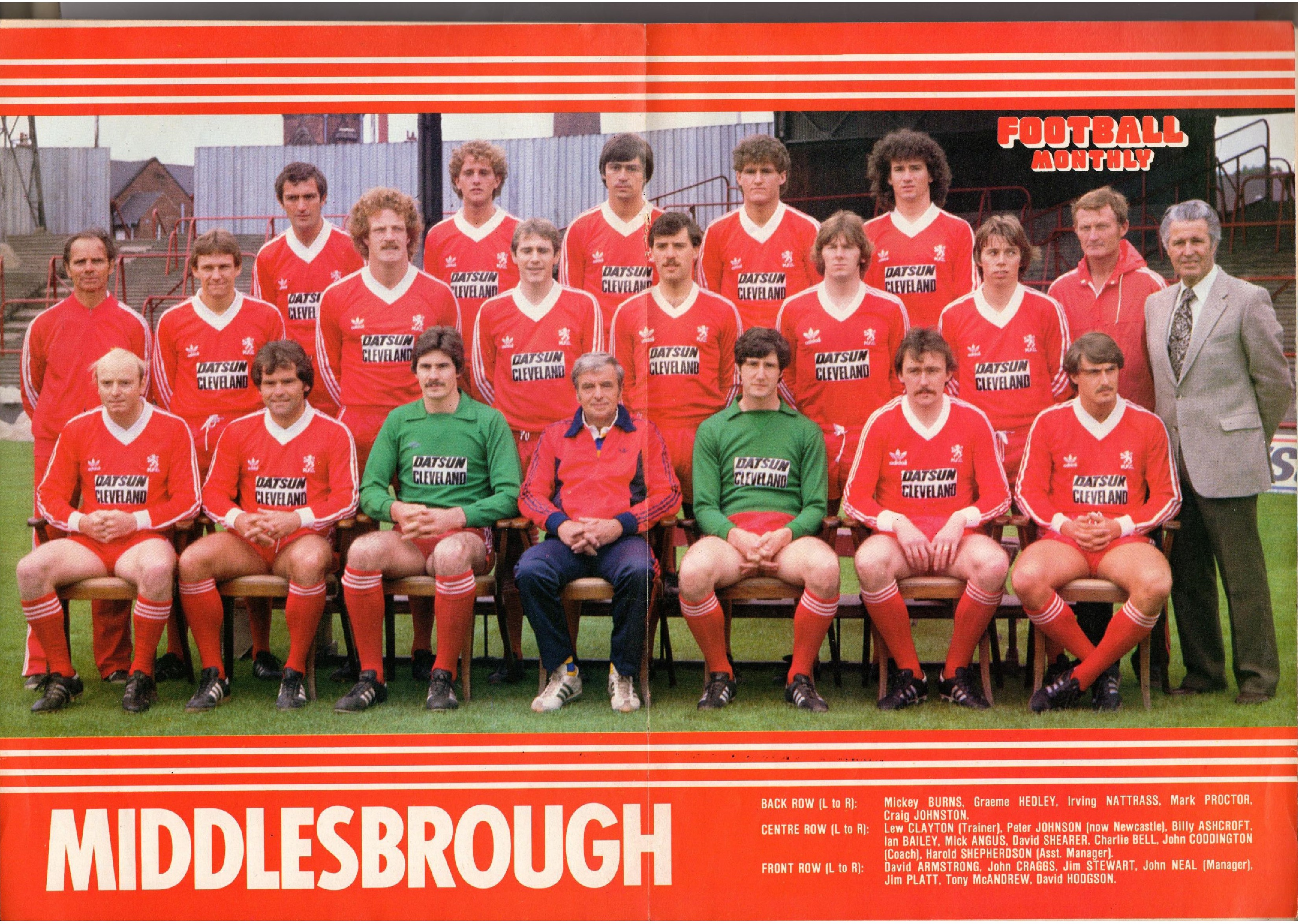 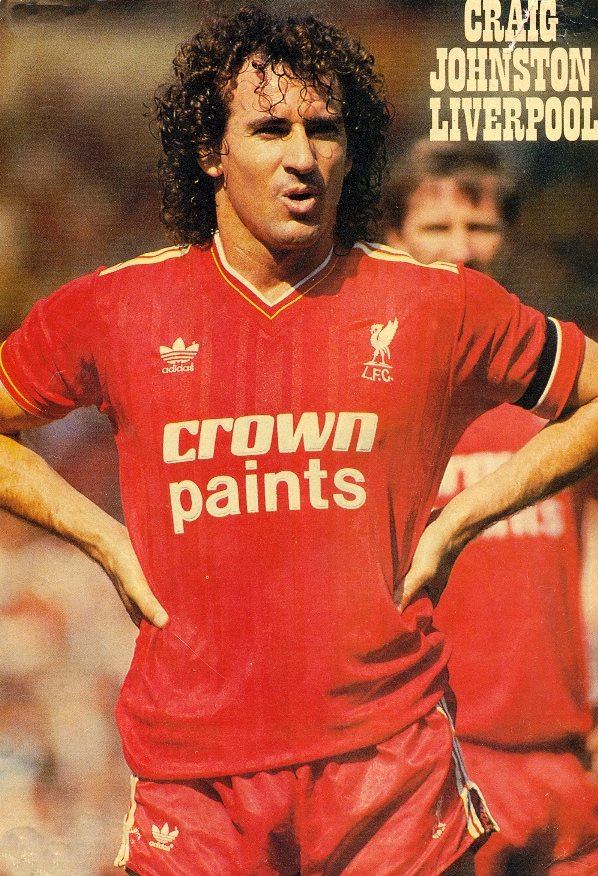 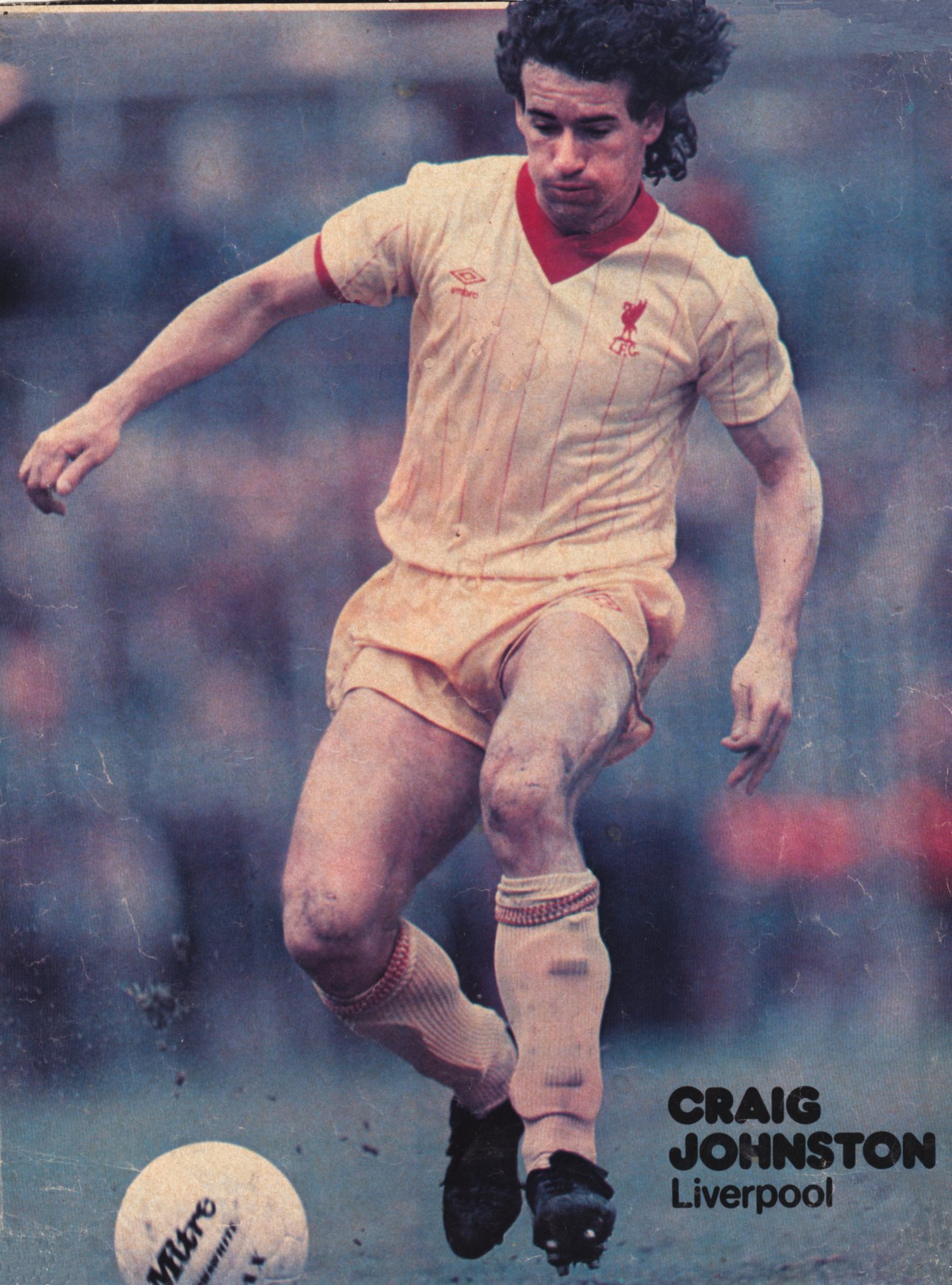 Poster of Johnston in the yellow kit 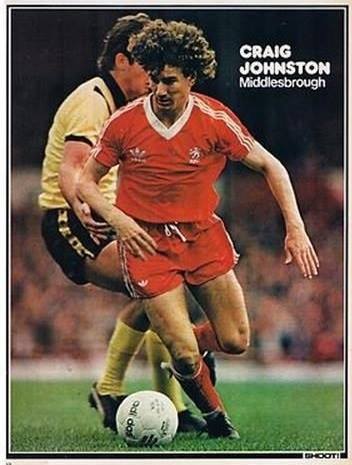 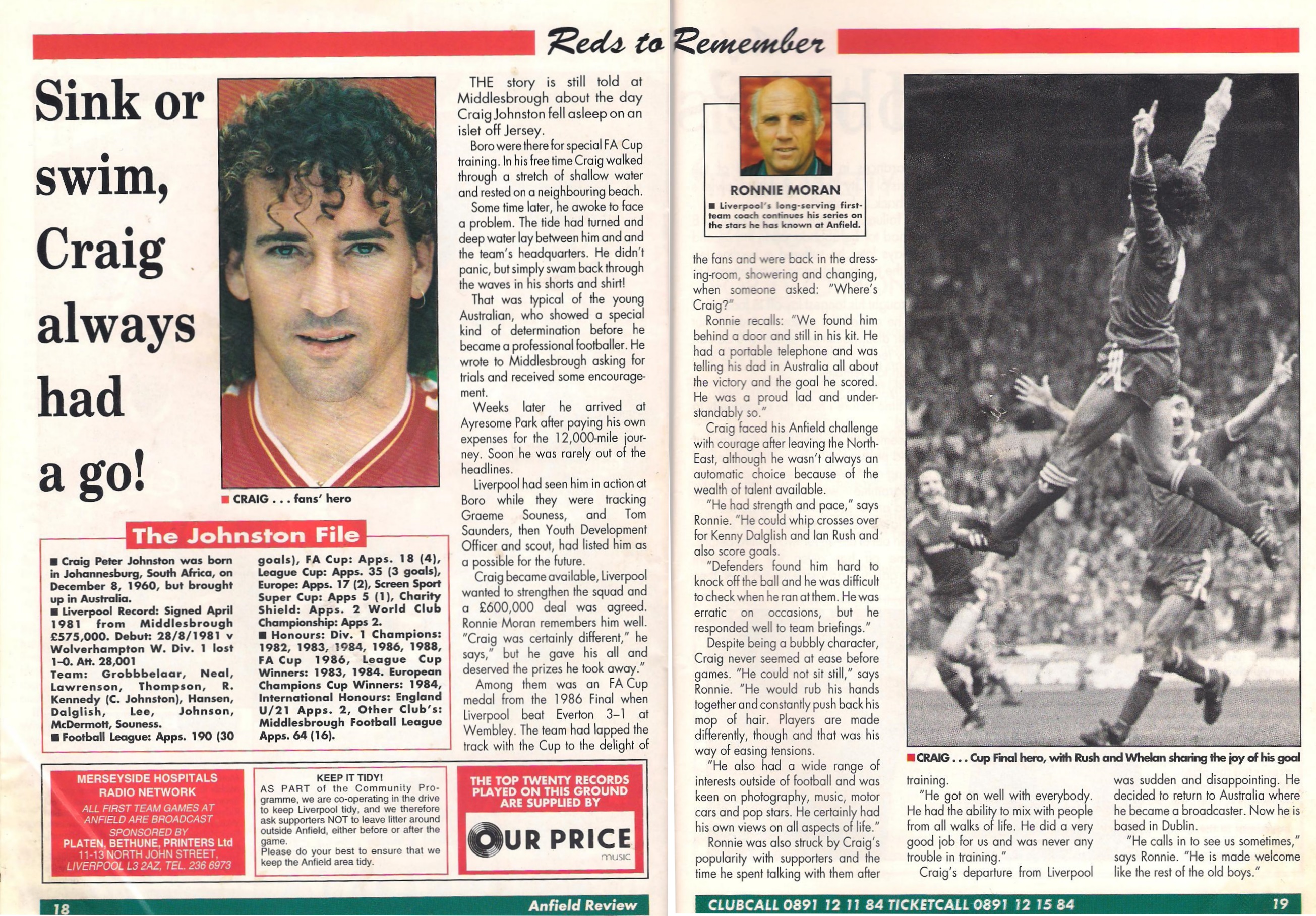 Reds to remember from the LFC match programme 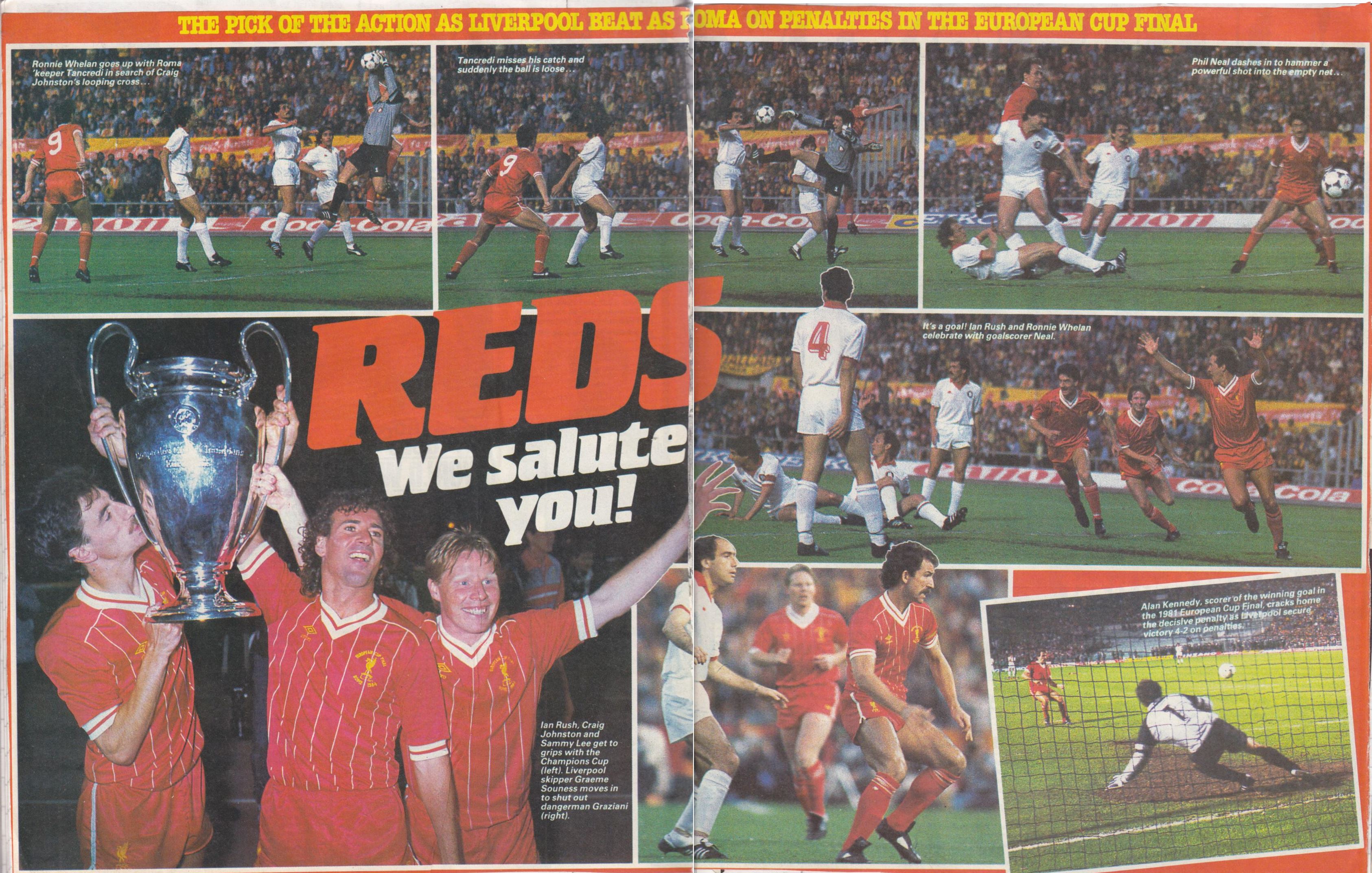 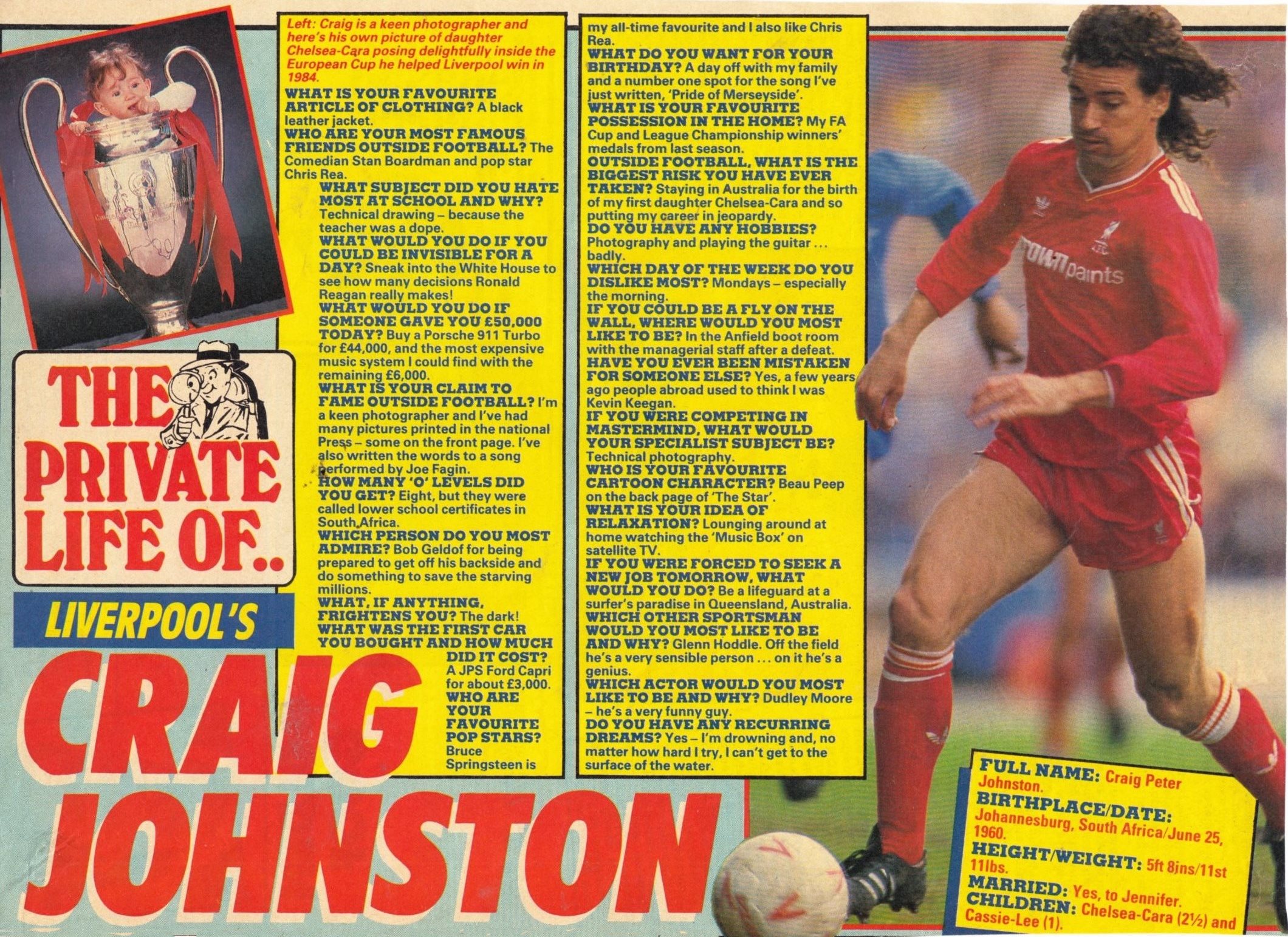 The private life of Craig Johnston 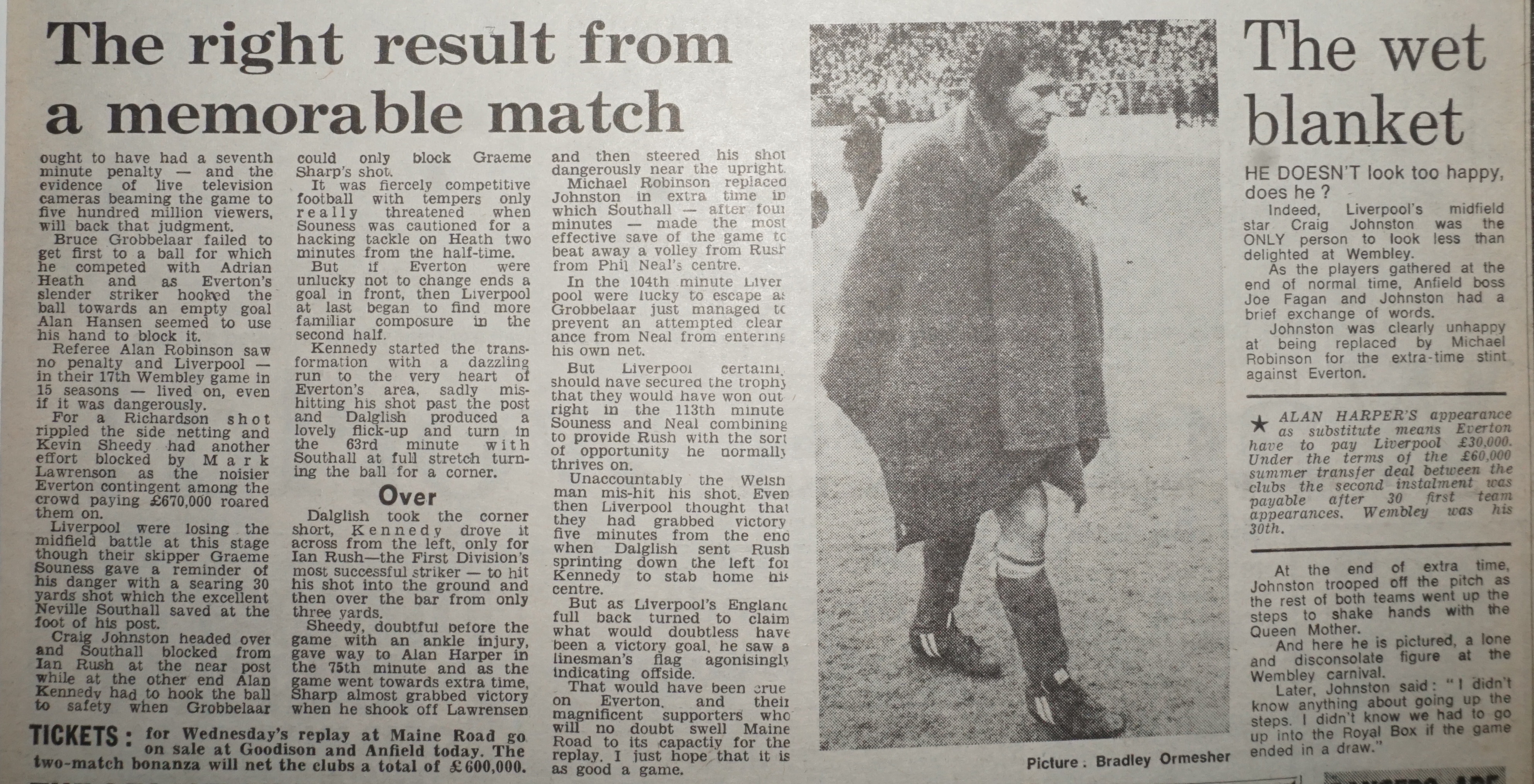 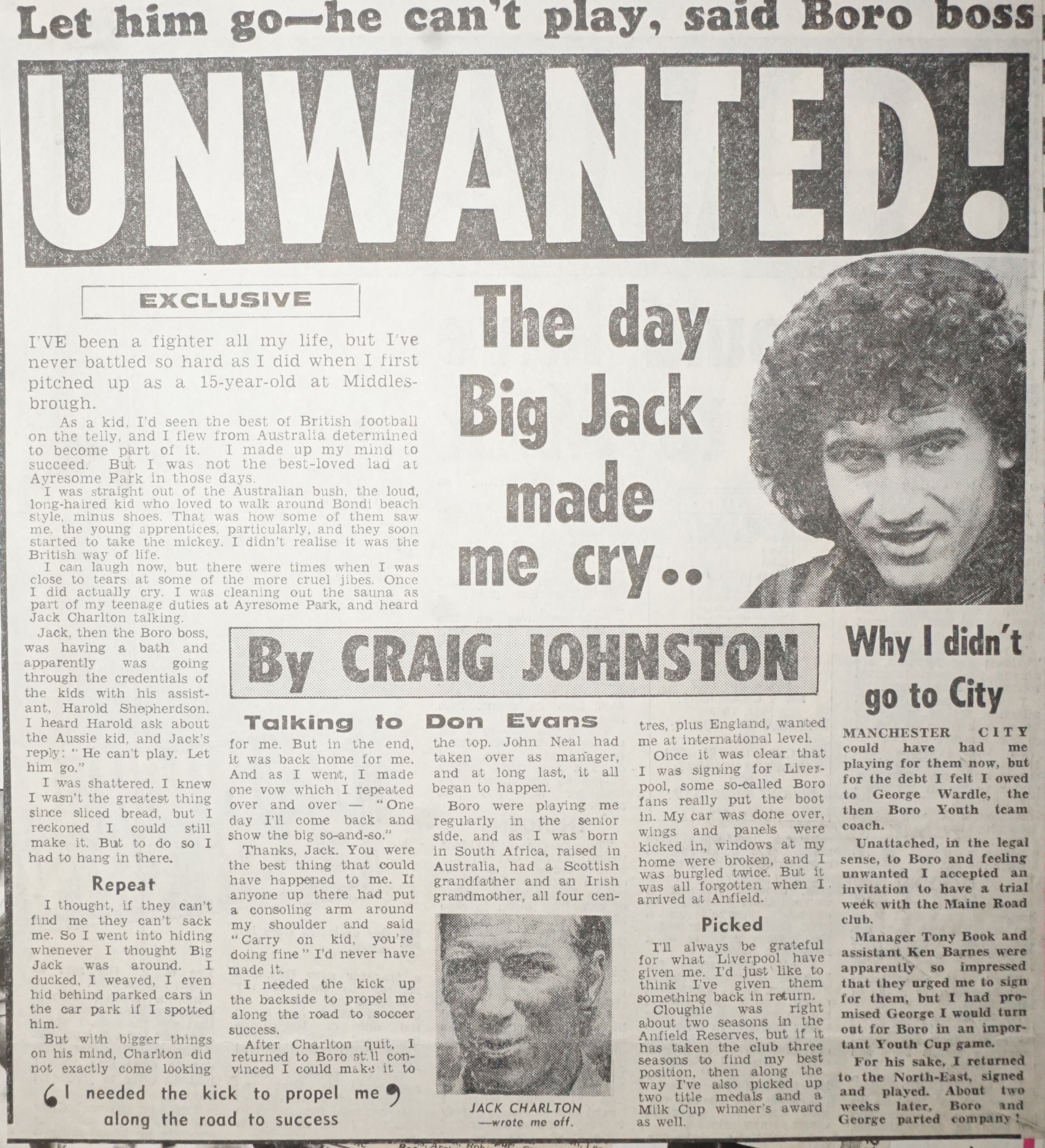