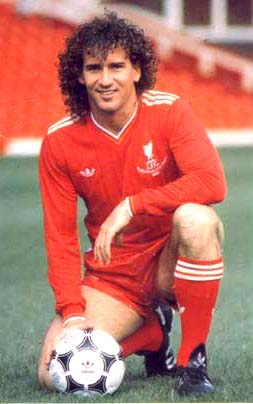 I sometimes think Craig Johnston must hail from Liverpool. He has to be the most international footballer in the game today. Born in South Africa, he was raised in Australia by a family with strong Scottish and Irish connections. But he plays like a Liverpudlian.

He is a highly committed young man, and his commitment to the club is obvious in his play. You would think he had grown up on the Kop judging by the effort and eagerness that spill out of him every Saturday afternoon. The feeling for the game of football within the city of Liverpool has always been one of the most important factors in the club’s success. If the same managers and players had come together in another town, I have no doubt that they would have prospered because so many of them have been outstanding at their jobs. But they could not have combined to become the same force in the game without the backing of the people of Merseyside.

Once upon a time Bill Shankly used to claim that playing in front of them at Anfield was worth a goal start to us. Scousers tend to be very passionate types who voice their views and their opinions loudly. When fifty thousand of them come together of the opinion that Liverpool are unbeatable, they let the opposition know about it. Time and time again we have scored vital late goals in crucial games at Anfield, and the vocal encouragement the team have received from the terraces has undoubtedly been, in part, responsible. Their loyalty and rabid enthusiasm demands a never-say-die approach from the players, and few epitomise that approach more completely than Craig.

In an ideal world would always have a hood Koppite in your team a Tommy Smith or a Thompson or a Sammy to constantly remind the outsiders what an honour a responsibility it is to pull on that famous red jersey. If there are no local lads around then it is important to have few players who perform with the same will and sense of pride that you can count on from the lifelong fans of the club.

The Koppites have a ways had a special place their hearts for men like Joey Jones and Alan Kennedy because they are players whose commitment to the club was evident with every step they took. There was determination and an urgency about their play which more than compensated for any failings they may have had in the eyes of the supporters.

Craig is very much a crowd pleaser. They admire his industry, his courage and his dedication to the cause. They enjoy his turns and his drag-backs and his dribbles. They can identify with him and his feelings for Liverpool Football Club. Of course he has a tremendous engine. He is a fellow who prides himself on his level of fitness. I think he tells himself that he wouldn't be where he is in the game today unless he had such energy, and motivates himself by that thought.

He's a lad who actually enjoys running. Most footballers get through the leg work because they know it's just got to be done. Chasing some other chap up and down the field for ninety minutes is not their idea of fun. It's the hard graft of football, but somebody has to do it. Craig loves it. He's like one of those toys with the long-life batteries. You just switch him on, put him down on the pitch, and watch him go! And he's still going strong when the other batteries have long since run out.

I played him up front from time to time because he was such a handful for defenders. He never gives you a moment's rest. He's a pest to opponents, always buzzing around you and chasing lost causes. He's persistent enough to make things happen for himself, to force a mistake or a kind break of the ball.

His other great asset as a forward is that he's a bit of an individualist. I used to say to him, 'I'm sure your parents kept you locked in your own back yard at home when you were a boy'. He played the game as if he had never been in a team with other players, as if he was only used to chasing the ball around on his own. When we bought him from Middlesbrough in 1981, it was his team work that was in need of improvement. You must have heard it said a million times that Liverpool's great strength is that they play as a team. Well, Craig's heard that a million times since 1981. All we have tried to do is make the game easier for him. ..to make him more aware of how to support colleagues and receive support from them. As a forward, we could give him a little bit more licence to do his own thing, but as a midfield player he has had to learn to adapt to the team's needs... to come out ot his back-yard and play with the other boys in the street.

Football tends to reflect national traits. Craig may be a man of many nations, but first and foremost he is an Australian. The Aussies don't lack self-confidence as a rule, and Craig is no exception to that rule. But neither do they hold back when somebody offers them an opportunity to get on in life.

Our Anfield Aussie has had a crack at just about everything. He's an avid photographer, he takes guitar lessons, he's learning an extra language, he's written a song and directed a video to go with it, I'm half expecting him to come into training one morning and tell me he's just come back from the moon!

But whatever his fancy, he gives his all to it. He's the proverbial 110 per center.. a very strong and single-minded character. He certainly puts his heart and soul into that number eight shirt every weekend, and you can ask no more than that of any player.