Wayne Harrison - When another teenager's dream ended in heartache 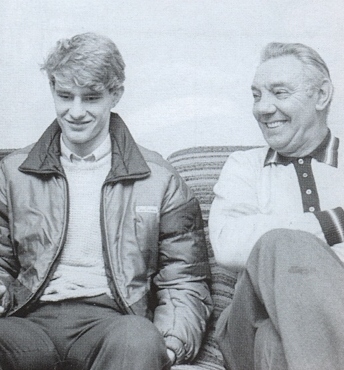 At age 17 in March 1985, Harrison became the world's most expensive teenager when he joined Liverpool from Oldham for a then significant fee of £250,000.

Harrison was on the verge of a seat on the substitutes' bench when, in a bizarre accident, he crashed through a greenhouse and, with the local ambulance service on strike at the time, all but died through loss of blood before the backup Army medics could rush him to hospital. Other blows followed - a double hernia followed by cartilage, knee and shoulder injuries - after which Harrison returned from each visit to the operating theatre even more determined to fulfil his destiny. Then, still only 22, in the last reserve game of the season against Bradford City in May 1990, he collided with the opposing goalkeeper, tearing the cruciate ligaments in his knee; the damage was irreparable. After 23 football-related operations but not one first-team appearance for Liverpool, he was gently told the sad news that he would have to retire.

"My transfer to Liverpool was signed and sealed really quickly," he recalls. "I was very young and not even interested in what the contract said. I supported Liverpool as a kid - Dalglish and Keegan were my idols, so it was a dream come true. 'The youngster's Liverpool career was dogged by injuries and misfortune. Harrison says: "I have had 23 football-related operations altogether - 12 of those were on the knee that caused me to quit. Before that, I had a double hernia, groin problems, cartilage on my knee and a sore shoulder. "Then I had started to string together a great run of form for the reserves when the big injury that ended my career struck. "Not surprisingly, he can remember the incident as though it had happened yesterday. "It was just a high tackle from the goalkeeper. He caught me at full pelt and I didn't see him coming at all. I was running at full speed, trying to latch onto the ball, and he just caught me. I remember feeling really physically sick, especially when I tried to get on my feet. It was so painful.

Eventually, in 1991, the day Harrison had feared arrived. "Graeme Souness asked to see me and basically told me the doctors had said they didn't think that I should play again." I was utterly devastated I was only 22 and my head was in a real spin. I had to have further operations on the knee, which got worse over time and, to be honest, I didn't do much for three or four years."

The player's plight was alleviated somewhat by a testimonial game between Oldham and Liverpool in 1992, but, sadly, Harrison was not even fit enough to turn out on the field for a token appearance. After being tantalisingly close to a life of luxury and fame, Harrison is now back in modest surroundings. He works in his home town of Stockport as an HGV driver for Robinson's brewery, but is philosophical about his former career and what might have been. "The best way to look at it now is that I don't think anything can ever be as bad as it has been," he says. "But I don't feel bitter. I am getting on with my life again now."