Without a doubt one of the most talented players in Liverpool's history. Mølby fought a hard battle with his weight, but his vision, immense skill, sublime passing and shooting ability more than made up for his lack of mobility. When Souness left Liverpool, Mølby was invited for a ten-day trial at Anfield. In his first match, against Home Farm in Ireland he took the ball on his chest, kneed the ball over the defender's head and volleyed it into the net. Joe Fagan signed him two days later. The great Dane had honed his trade at Ajax in Amsterdam for two and a half years prior to joining the European champions. He was in for a shock when he moved to Merseyside. "When we arrived at Carrow Road for my first game, we filed into the away dressing room," Mølby remembers. "I asked Ronnie Moran, ‘What do we do now?’ ‘Just get changed,' growled Ronnie. ‘Get yourself ready for the game, son.’ ‘What time do we go out to warm up?’ I asked. ‘You don’t have time to warm up, save your energy.’ I couldn’t believe what I was hearing. At Ajax, we spent about 25 minutes warming up." Despite the lack of preparation Liverpool got the right results.

Mølby was a regular in his first season as a defensive midfielder until he had to make way for Kevin MacDonald halfway through the campaign. Mølby was undoubtedly Liverpool's best player in the double 1985/86 season as Dalglish had great belief in him. "I couldn't believe such a creative player was languishing in Liverpool reserves and I couldn't wait to use him," Dalglish later said. "Jan had unbelievable feet and I defied anybody to state categorically which was the stronger, because either foot could propel the ball at unbelievable speed towards goal." Mølby enjoyed his freedom under Dalglish, playing sweeper on occasion as well as shadow striker behind Rushie. He scored 21 goals in 58 matches and delivered a man-of-the-match performance in the 3-1 win over Everton in the FA Cup final. Mølby's most famous goal came in the fourth round of the League Cup on 26 November 1985. Paul McGrath had put United 1-0 up but with roughly half an hour to go the Dane took charge at Anfield. "I took the ball off Norman Whiteside inside our own half. I went on a run past three or four United players and then shot with my right foot from about 20 yards. Gary Bailey, the United 'keeper, still insists it was the hardest shot he had ever faced. It's true that from the moment it left my boot to the moment it hit the net Gary didn't see it." A minute later Mølby added another from the penalty spot adding to his legend as the most prolific penalty-taker in Liverpool's history, scoring 42 out of 45 penalties. The secret to his spot-kick success was fairly simple: "If the goalkeeper didn’t move before I struck my shot I would always put it low to his right but if he moved I would go the other way. I guess that’s not something you can teach somebody it’s just something in their make-up."

Mølby started the following season well enough, but faded during the second half by his own admission. 1987/88 turned to be a joyous campaign for Liverpool but a personal disaster for Mølby. He broke his leg after a challenge by John Wark in pre-season training and In February 1988 he was arrested for a high-speed car chase, having given the police the slip. The law was waiting for him the following day, having identified the perpetrator. Six months later he was put behind bars for six weeks. Mølby had been a regular as a central defender while waiting for his trial, but now faced an uncertain future at the club. Once Mølby was released Dalglish convinced the club's Board to give him another chance at Liverpool. The Scot was a big admirer of Mølby's abilities, but couldn't help but being frustrated with him. "Jan deprived an awful lot of people of an awful lot of enjoyment by not being able to stay in shape," Dalglish said. Mølby was soon back playing in January 1989 until another injury cut his season short.

After being on the fringes of the first team in the 1989/90 Championship season Mølby became a regular starter in the second part of 1990/91. Dalglish resigned and Souness took over but Mølby kept his place and on 30 November 1991 he reminded everyone of the fantastic talent he possessed. Only three minutes had passed in Liverpool's League game against Norwich at Anfield when Mølby struck a venomous shot from 30 yards into the top corner. Souness enthused: "I think the match was worth coming to see for that goal alone." Mølby won the FA Cup for the second time in the 1991/92 season which turned out to be his last as a Liverpool regular. Injuries and subsequent lack of fitness restricted him to only 42 games in his last four seasons at Liverpool before being released in 1996.

Jan the Man reveals his favourite goal and game and his all-time Reds XI.

Liverpool are gunning for their sixth European Cup win when they take on AC Milan in Athens on Wednesday.

Liverpool make it a day for history

Match report from The Sunday Times on the FA Cup final between Liverpool - Everton in 1986.

LFChistory interviewed Liverpool legend Jan Molby at length. Molby is a hilarious guy and he has views on everything.

Rush and Mølby done with the lower leagues - exclusive from LFChistory

LFChistory had a quick chat with Jan Mølby and Ian Rush the other day and asked whether they have any plans to become football managers again.

Jan Molby says in an exclusive interview with LFChistory.net that Brondby's Daniel Agger is good enough to make the grade at Liverpool.

Molby shows the way against Watford

Jan Mølby is released from prison in 1988 and gets the best news he could have ever wished for.

Mølby plays football in jail and faces an uncertain future with the Reds.

When Jan Mølby was enjoying his best years in the red jersey, he had an unfortunate incident with the law and was sent to jail. Thankfully LFC took him back, but of course this was a harrowing experience.

"Jan was the sort of player who could turn a game with one pass. He could disappear for long periods and then pop up with a moment of inspiration. With a player like Ian Rush in the side you only need one chance to score a goal. More often than not Mølby was our man to unlock a defence. He was an inspired signing for Liverpool."

Mark Lawrenson on the great Dane

"Within about three months of being here I spoke with a Scouse accent, all down to Sammy Lee. I used to get changed next to Sammy, and everything he said I’d pick up. I blame Sammy."

Mølby on his perfect Scouse accent

"How can you say ‘What I have been used to at Ajax is the right way, and this is the wrong way’ because they got results at Liverpool. I played four European games in the European Cup at Ajax. We did everything right. We’d go to the training camp on Saturday, we’d live like monks, play on a Wednesday, get beat. I came to Liverpool, you get drawn against Benfica, meet up on a Wednesday morning, do an hour’s training, go to the hotel and have steak and a few chips, go and have a couple of hours sleep, go and play and beat them."

Jan Mølby on Ajax vs. Liverpool

"Jan deprived an awful lot of people of an awful lot of enjoyment by not being able to stay in shape. Jan could have been one of the very best because his ability was unquestioned."

"I guess it was just the way it was in my make-up that I always felt comfortable and confident taking penalties. If the goalkeeper didn’t move before I struck my shot I would always put it low to his right but if he moved I would go the other way. I guess that’s not something you can teach somebody it’s just something in their make-up."

"I’ll never forget my first contribution to Liverpool’s cause on the pitch. It was in the first minute or so. I made a run down the right wing and Phil put it over the top. Steve Bruce was making his debut for Norwich in the same game. I lifted the ball in and Steve arrived to score an own goal! That was my and Steve’ s first touch of the game!"

Jan Mølby had a memorable debut for Liverpool

"When we arrived at Carrow Road for my first game, we filed into the away dressing room. I asked Ronnie Moran, ‘What do we do now?’ ‘Just get changed’, growled Ronnie. ‘Get yourself ready for the game, son.’ ‘What time do we go out to warm up?’ I asked. ‘You don’t have time to warm up, save your energy.’ I couldn’t believe what I was hearing. At Ajax, we spent about 25 minutes warming up.

As I started to get changed, a couple of the lads said the staff liked the players to have a massage before a game. I should ask Ronnie if he’d give me one. So that’s precisely what I did. ‘Er… Ronnie. Can I have a massage?’ ‘Fuck off!’, shouted Ronnie. ‘You earn the fucking right to have a massage. Go out and play some games and then I might consider it.’ I’d only been at the club for a couple of games and I started to wonder what what I’d let myself in for. Then I saw all the lads pissing themselves. That was my introduction to the Liverpool dressing room humour."

Mølby taught a lesson by his new Liverpool teammates

BMI? Bacon, mayonnaise and ice cream would be good if you're planning a Jan Molby training regime. 38 was his waist size for the duration of his time at Liverpool. Yes, the man was hefty by footballers' standards but, on the pitch, it was his skills that carried real weight. A standard-bearer for us, er, chunkier gentlemen. His goal in the League Cup match against Manchester United at Anfield in an untelevised match in 1985 has become the stuff of legend. Molby has a video of it but has been unforthcoming in producing it. He picked the ball up near the dugout and burst past three opponents before shooting from outside the box. Gary Bailey said it was the hardest shot he ever faced. I had a copy of it - acquired from a mole inside Old Trafford; yes, United were taping games back then - but lent it to a fellow drunk in 1989 and never saw it again. The Holy Grail of Liverpool goals and I was dumb enough to lose it. I could destroy the myth and say that Molby never levelled Norman Whiteside with a brilliantly brutal but fair tackle. That he never danced around three defenders - they backed away like Brazilians with Barnes. That the shot was only half as hard as a Jimmy Case special. But I won't. It was better than you even imagine it. In fact, as Shankly might have said, it was the greatest event in the history of time. 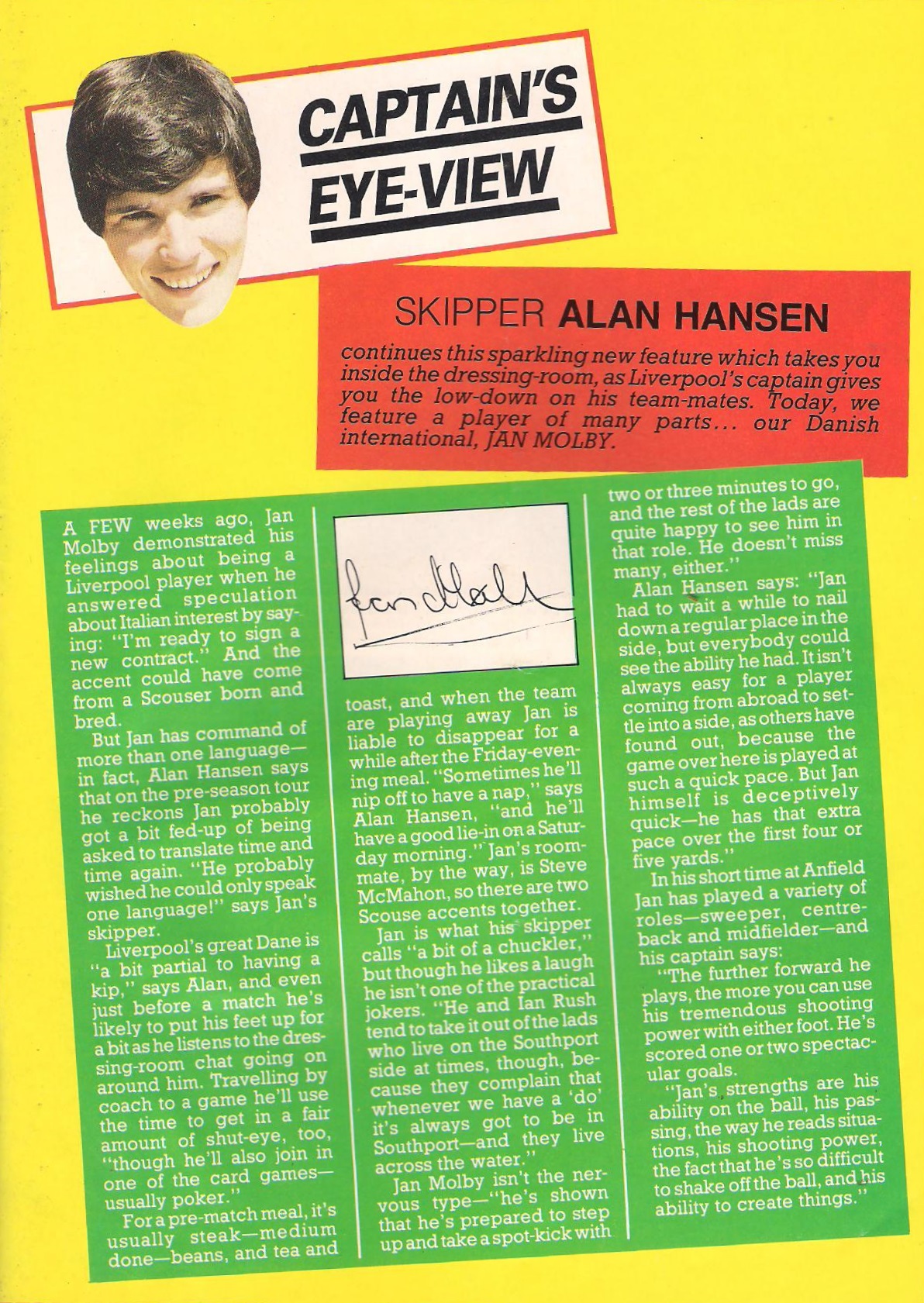 At home with Mølby - The Official Liverpool Magazine 1994/95 Don't Appreciate Him Until He's Gone - Johnston on Souness In action against Genoa in March 1992 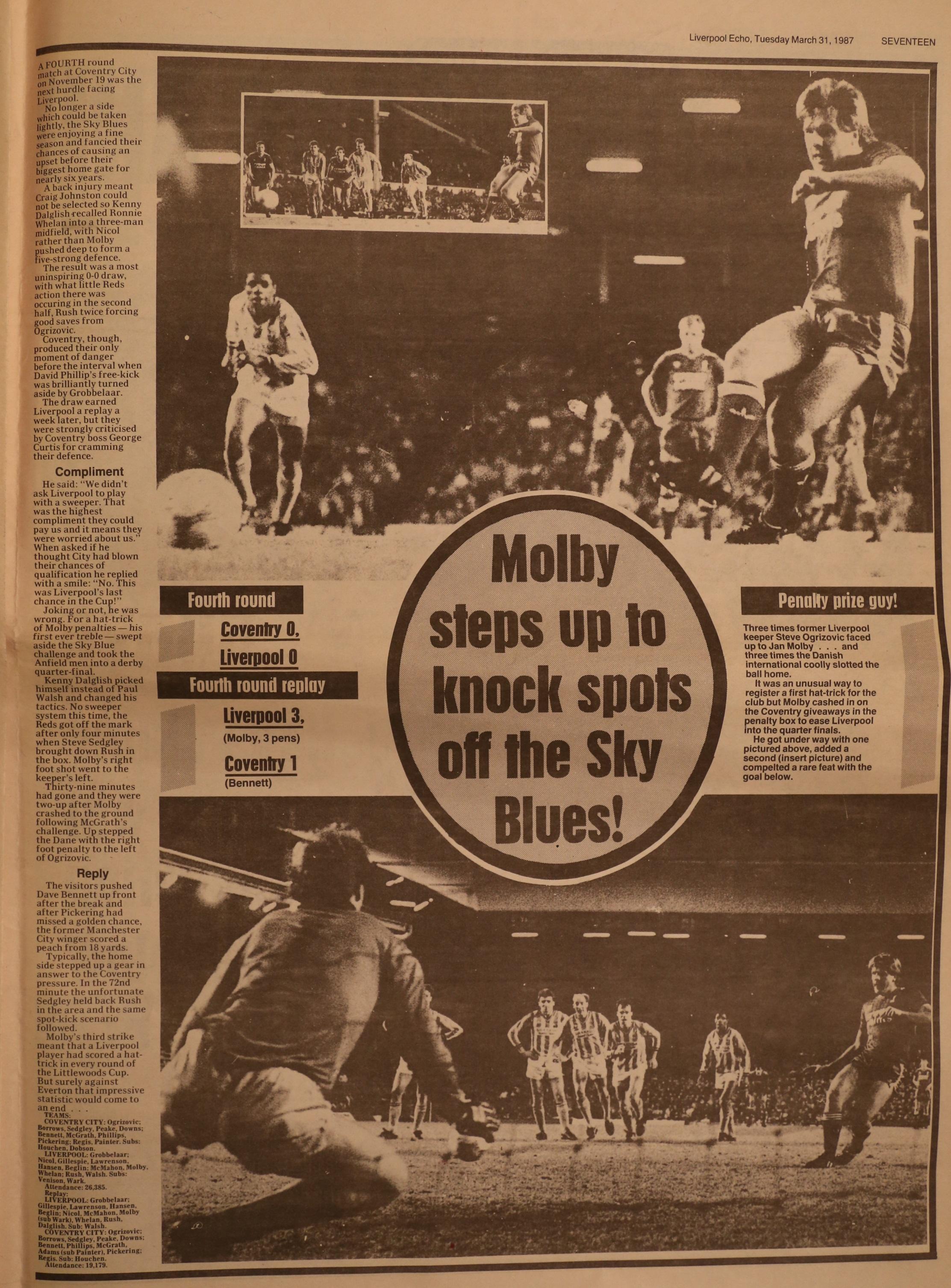 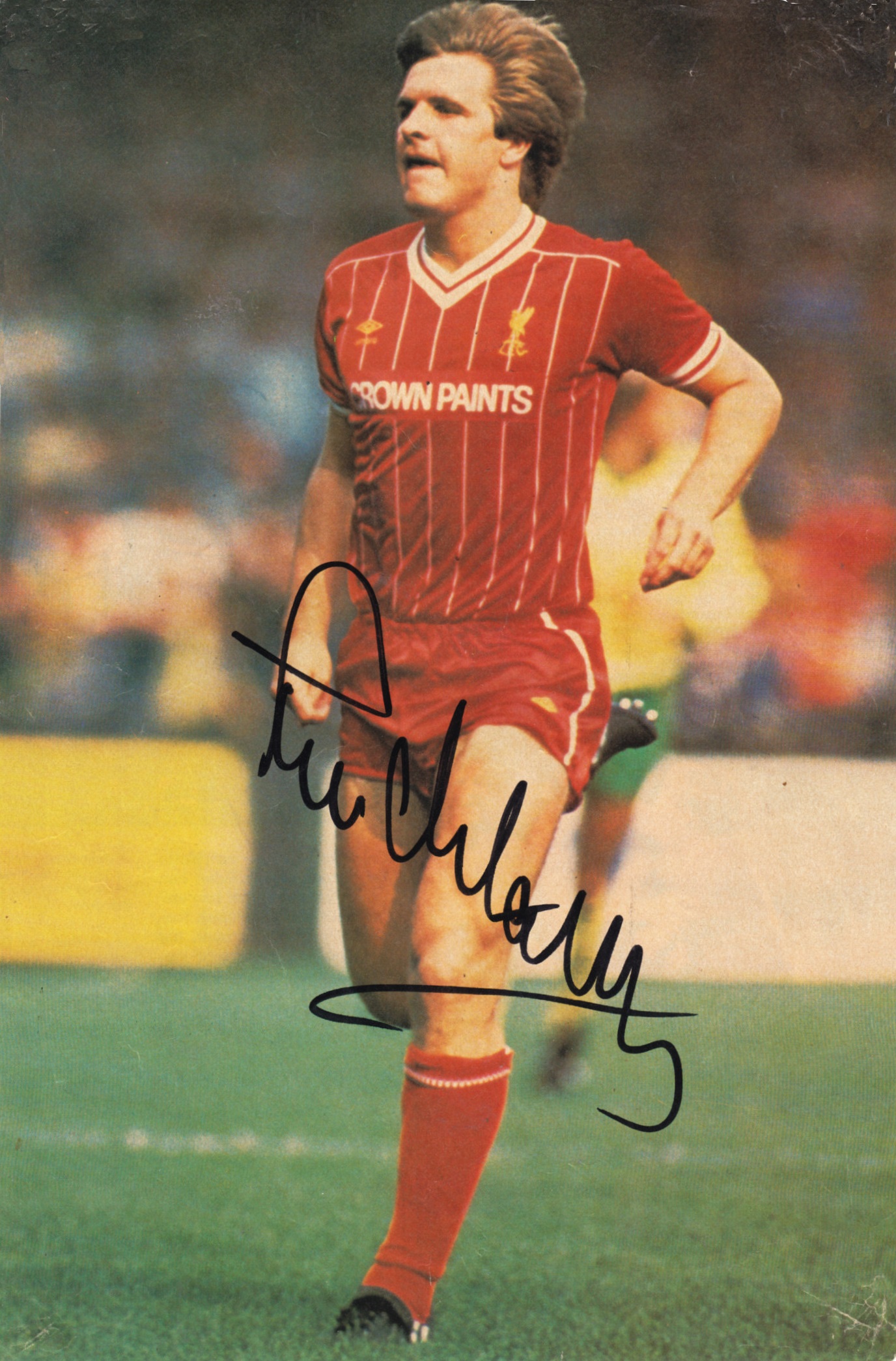 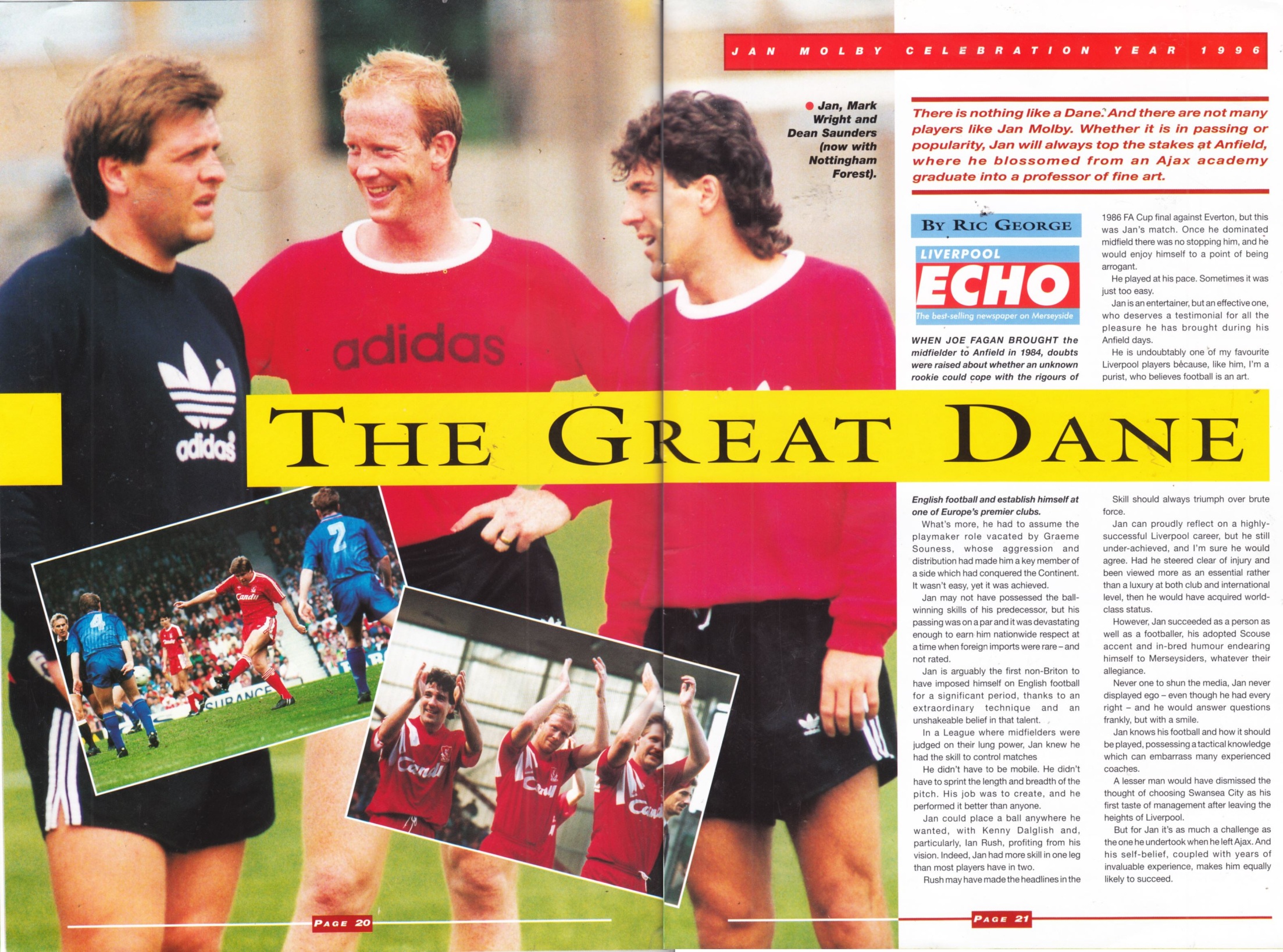 The Great Dane, by the Echo's Ric George