Bob Paisley once said that of all the Liverpool players he had seen, you had the best technique. That’s a big comment.

It’s a big comment. It came very early in my Liverpool career. When they see a big player, they always think of the physical side of his game. My strength was always the technical side of the game. I was brought up in Denmark who are very good at producing excellent technical footballers. It was very normal for me. But it’s nice to have played for Liverpool and for the most successful manager they ever had to say something like that.

Knud Engedahl [Mølby’s coach at Kolding] also said that you are one of the best five footballers to come out of Denmark if not the best.

When I came into the national side, we had one of the best teams in the world. Piontek, the manager at the time felt that with, Frank Arnesen, Michael Laudrup, Søren Lerby, he had one of that type too many. I missed out because of it. Thet were exceptionally good players, but it’s one thing that disappointed me.

You said in your first season in 1984-85 that you wanted to leave because Kevin MacDonald was bought and you were dropped from the side. You had just been bought, 21 years of age and maybe a bit impatient?

Well, I think you are. This wasn’t in the days of rotation and big squads. I played two years at Ajax and was involved with the Danish national side. I knew it was going to be difficult at Liverpool. No disrespect to people who were playing like Kevin MacDonald or John Wark, but I felt I was good enough to be in the team. But it was a typical Liverpool thing. They buy you and put you in the reserves until you’re ready. All of I could think of was that in ’85 Denmark qualified for the World cup in 1986 and of course you wanted to be part of that. The Danish manager was very strict that if you didn’t play you wouldn’t be part of the national squad. Liverpool have always looked on their players as being adults and I think they understood my situation. When Kenny Dalglish became manager he changed me because he had a different role for me to play. Things went on a lot better.

Was the transition from Holland to England difficult?

My first season was a very difficult time all around for Liverpool. In October we were second from bottom. If I had joined a more settled team it would have been easier. We had a lot of problems. Kenny Dalglish was out injured, Ian Rush had a cartilage operation. Souness had left. Phil Neal and Alan Kennedy were coming towards the back end of their careers.

You are the best penalty taker in Liverpool’s history. You took 45 penalties, but missed three…

A quick reply from Mølby: Sheffield Wednesday, QPR and Chelsea.

So why did you miss ‘em?

It was three of the finest saves you have ever seen.

So the shots were not just bad?

No, no fantastic saves. I am always disappointed when you talk about Gordon Banks’ save against Pele that you don’t mention the likes of Martin Hodge from Sheffield Wednesday, Dave Beasant from Chelsea and Paul Barron from QPR.

The reason we didn’t win that was that Ronnie Whelan and Gary Gillespie scored two own goals not because I missed a penalty. 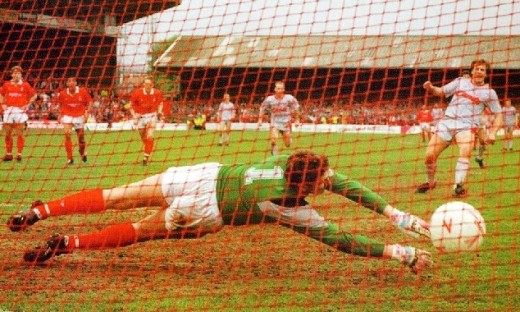 Your shots were pretty powerful. Were they ever measured?

No. Now and again I can strike a ball, but I get as much pleasure out of creating goals as scoring goals. My strength was that I always wanted the ball and wanted to be a part of creating things and never hid.

One of your most memorable goals was one of two you scored against Manchester United [26th November 1985] but nobody outside the ground has seen that goal because TV was on strike. Rumour has it that Gary Bailey [Man Utd goalkeeper] didn’t see that shot either…

He didn’t see it, but he nearly saw it on the way back. The League cup was a big cup in those days and Manchester United were going to Anfield, having won 11 straight games and were going extremely well. It was a big game and a lot of tension on the ground. To get a goal like that on a night we weren’t playing particularily well was great. It was a very memorable moment.

I just remember jumping and the next thing I landed on is Alan Hansen’s head and had Swindlehurst’s boot in my face. I was maybe knocked unconscious for ten seconds. They helped me off the pitch. Brucie’s coming around. ‘We’ve got a couple of teeth, Jan’ and I said: ‘What good is that’? So, welcome to English football.

You scored 21 goals in the 1985-86 double season. The FA Cup final was obviously a highlight.

It’s a dream to play in a cup final. We used to watch the FA Cup final every year in Denmark. I wanted to be the first Dane to play in an FA Cup final. I didn’t manage that as Jesper Olsen got there twelve months before. But I am probably the one Danish player who had the biggest impact on a cup final being involved in all the three goals. That was undoubtedly the highlight of my footballing career.

Did you think your Liverpool career would take a turn for the worse when Souness took over?

No, not really because Souness had tried to sign me for Glasgow Rangers. The first thing he did when he came to Liverpool was to move me to sweeper. I played two games as a sweeper and then he told me I could go. That only lasted for about six weeks. He had then realised the replacements he had in Don Hutchison, Mike Marsh and Jamie Redknapp weren’t quite ready, so he brought me back into it.

You played as a sweeper as well under Dalglish. Did you like it?

Did I like it? I didn’t mind. I could play in that position, but my preferred position was midfield. Kenny Dalglish never played me a sweeper because of my defensive qualities, but because of my ability to start play from the back so it wasn’t too bad.