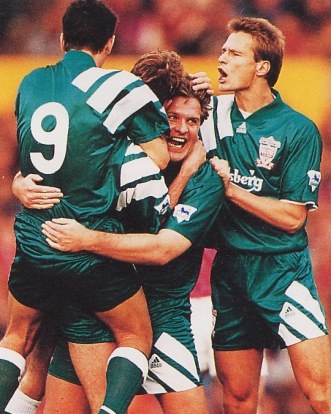 At first his favourite act on saturday afternoon trick was a disappearing act. I remember him coming up to me after his Merseyside derby match and saying that he should have paid to get in because all he was doing was watching the ball past him. In Denmark he had learnt his remarkable skills in isolation. He was probably the sort of boy who spent hours in the family garden playing with a ball on his own. If he had spent those hours practising his technique in the middle of a motorway he might have been prepared for life in the first division.

It took Jan a year or so to come up with a survival plan that would see him go through an English season. He became a more aggressive person. The fans christened him "Rambo" in recognition of the fact. Danes are generally carefree and easy-going types by nature. Jan had fourteen and a half stone to throw around and we had to encourage him to use it.

Certainly when he is allowed the time to play the way he likes, he is a treat to watch. He just seems to flick and jab at the ball and it flies off his foot. Everything he does is so sweet and crisp. He can't get enough of the ball when everything is running for him. He's like a compulsive gambler. No pass is too difficult to try, no shooting chance is allowed to go untaken. He can go trough a ten minute spell when you think he's operating it by remote control. He could go on the stage with his repertoire of party pieces if he ever was short of a few bob. Getting that repertoire to stretch to 90 minutes per game and 60 games per season is the trick that he is bound to find the most difficult to master.


Copyright - Clive Tyldesley from his book "Bob Paisley's personal view of the First Team Squad of 1986-87".