Wark burst unto the scene in 1975 as a part of Ipswich's successful youth cup-winning team and the centre-half who had been fifth-choice at the beginning of the season, was by now starring in the first team. He benefited from the guidance of Bobby Robson, developing into a free-scoring midfielder reaching the pinnacle of his career in the 1980/81 season when he was voted PFA Player of the Year as well as Young European Player of the Year having netted 14 goals in Ipswich's successful UEFA Cup campaign, equalling the record of Jose Altafini. He scored a total of 36 goals in this outstanding campaign when Ipswich finished runners-up in the League to Aston Villa. Wark certainly enjoyed his time at Ipswich and also had his brush with Hollywood in the role of Arthur Hayes, a prisoner of war held by Nazis in "Escape to Victory." "I spent five weeks making the movie in Budapest in Hungary and mixing with the likes of Stallone, Bobby Moore, Ossie Ardiles and Pele. [Michael] Caine was fantastic, Stallone was a typical Yank; he had his minder and bodyguards. Once you got to know him he was fine, but he had all this baggage with him. Pele, the best player in the world and such a gentleman. We got brilliant. It was a great time." Wark scored 46 goals in which proved to be his last two seasons at Ipswich. After Robson's departure the club was on the slide and the player who Robson once claimed to be "the finest goalscoring midfielder of his generation” wanted a change of scenery. “I felt that I deserved to be paid more but Ipswich refused and that prompted me to ask for a transfer," Wark admitted.

The Scotsman made a high-profile move to Anfield with the impending departure of inspirational skipper Graeme Souness. Wark's great experience and impressive goalscoring record were no doubt seen as a way of reducing the impact of his fellow Scot's subsequent transfer to Sampdoria in Italy. Wark was staggered by how uncomplicated his medical at Liverpool was. "I was rather taken aback when the doctor entered the Anfield boot room", Wark said. "He was small in stature and I could not help but detect the smell of alcohol on his breath as he introduced himself to me. I was even more surprised when he announced we would stay put to conduct the medical examination. He took my blood pressure, looked at the reading and muttered 'that's fine.' Then something happened that to this day I still cannot get over. He asked me to bend down and touch my toes. Trying not to show my surprise, I did exactly as he asked and as I lifted my head he spoke again, this time to announce 'you've passed.' That was it, my Liverpool medical." Wark also enjoyed the training at the club. "I loved the training because it consisted of five-a-sides and more five-a-sides." Wark was certainly one of the lads and one teammate described him as "a total mad-cap with an unnerving habit of roaring with laughter without prior warning." On his arrival on Merseyside Wark was placed at the same hotel as summer arrivals, Jan Mølby and Paul Walsh. Almost inevitably because of the culture at the time, the trio didn’t waste time finding out what the city of Liverpool had to offer in terms of its nightlife. This wasn’t anything new to Wark: “If there had been a League championship for drinking in the 70s and 80s, Ipswich Town would have been among the major contenders," Wark said in his autobiography. "I found absolutely no difference after I was transferred to Liverpool in 1984. They were a match for anyone when it came to knocking it back”. Mark Lawrenson referred to Wark as “our champion beer-drinker." Wark scored on his debut at Watford and made nine first division appearances as the championship was won for a third successive year but he was ineligible to play in the semi-final and final of the European Cup that ended in victory in Rome.

Not everybody was convinced by Wark's usefulness to Liverpool, but prior to the 1984/85 Wark declared: "People feel Joe Fagan made a mistake buying me but I’m determined to make them eat their words!" And how he force-fed those words to his detractors! Wark was Liverpool's leading goalscorer with 27 goals in his first full season. He scored 18 goals in 40 League games, continued his incredible striking rate in Europe, scoring five in ten games, four in seven FA Cup games, netted three hat-tricks and scored his hundredth League goal in a game, incidentally enough against Ipswich. Wark was No. 11 in Liverpool's starting line-up that fateful night at Heysel when Liverpool had hoped to win the European Cup for the second year running. "When I look back on my time in football, and in particular my appearance in what is unquestionably the biggest game of them all, it is as if I am staring at a blank page in a book," Wark says regretfully. Enjoying the training at Melwood did not make Wark any less susceptible to injury. A damaged Achilles while training and a broken ankle when back in action were heavily responsible for the low number of matches he played in his second and third full seasons as a Liverpool player, just 18 in the glorious double season of 1985/86 and one less in the following campaign. The emergence of Jan Mølby restricted his chances further, settling in while Wark was out injured. Mølby is a big fan of Wark and analysed him as a player for LFChistory.net. "John is probably along with Bryan Robson the greatest goalscoring midfielder there has ever been. My strength was to read the game, but I still didn’t have that ability he had of knowing exactly when to arrive in the penalty area. John was an exceptional player. His biggest problem at Liverpool was that he wasn’t enough of a Liverpool player. His game was doing the job in the opposition’s penalty box and maybe he didn’t take enough part in the rest of the game."

“Hard as it was to depart Anfield, I knew it was the right thing to do." Wark moved back to Ipswich in January 1988. His mentor, Bobby Robson, advised him: “Money isn’t everything. Go where you will be happiest." That place was Ipswich Town, even though by then they were in the Second Division following their relegation in 1986. During his second spell at Portman Road, Wark's eye for a goal remained as strong as ever, as did his competence as a penalty-taker after being successful with 38 out of 43 spot-kicks during his first spell with the East Anglian club. A poor contract offer by his standards prompted him to go to Middlesbrough in 1990 after being voted the club's Player of the Year in two successive seasons. Wark returned "home" one year later for his third spell, this time returning to his old position of centre-half. He soon made an emotional return to Anfield in the FA Cup. Forced to come off with severe cramp towards the end of a pulsating match that Liverpool won 3-2 after extra-time, Wark was moved to tears by the thunderous reception the home supporters gave him as he left the arena. Wark played six more years for Ipswich until his retirement at 40. He made more than 820 appearances and scored a staggering total of 223 goals, to which can be added 29 full Scottish caps and 7 international goals, that total including all three matches and two goals for his country at the 1982 World Cup in Spain. He missed the 1986 World Cup in Mexico because of injury. Wark became one of four inaugural inductees into Ipswich Town's Hall of Fame. Wark made one appearance for Woodbridge Town in February 1999 when he and former Ipswich teammate, Paul Mason, turned out for the amateur club against Thame United in the quarter-finals of the FA Carlsberg Vase as the club was missing vital players through injury.

Bob Paisley has the last word: "How many times have you heard it said that goalscoring is all about being in 'the right place at the right time. Most footballers know where the right 'place' is, but relatively few can sense when the time is 'right'. John Wark has great timing. You could set your watch by him."

John Wark's name, reputation and career command respect. This book is a fascinating summary of an outstanding club career with Ipswich Town, Liverpool and Middlesbrough.

John Wark was in Focus at Shoot! when he was in his first spell at Ipswich.

Imagination and discipline rewarded with away goal

"A total mad-cap with an unnerving habit of roaring with laughter without prior warning."

John Wark as described by a former team-mate

"People feel Joe Fagan made a mistake buying me but I’m determined to make them eat their words!"

"He was one of those guys who just loved playing football. He could play at the back but was more famous for coming from midfield. Could score goals from deep and was a great all-round player."

"Caine was fantastic, Stallone was a typical Yank; he had his minder and bodyguards. Once you got to know him he was fine but he had all this baggage with him. Pele, the best player in the world and such a gentleman. We got on brilliant. It was a great time."

John Wark on his role in Escape to Victory

"How many times have you heard it said that goalscoring is all about being in 'the right place at the right time. Most footballers know where the right 'place' is, but relatively few can sense when the time is 'right'. John Wark has great timing. You could set your watch by him." Focus on John Wark at Ipswich 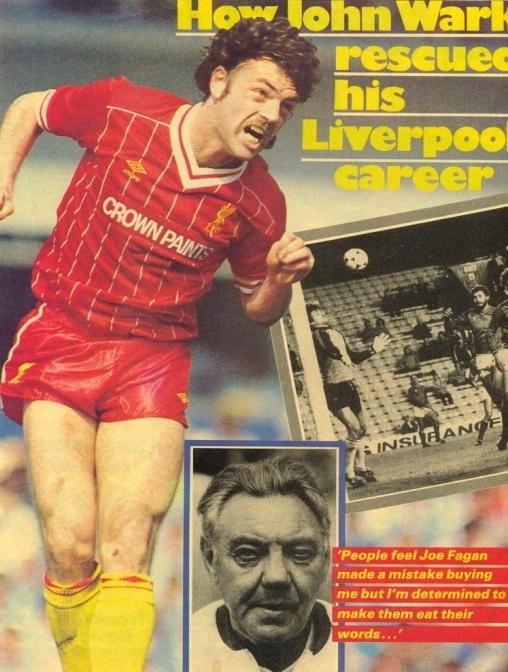