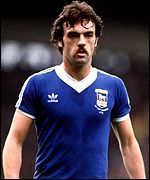 Few players have made the progress last season that Ipswich defender John Wark did. He started the campaign as fifth-choice centre-half and finished playing some blinders in the first-team. He was also one of the stars of Ipswich's fine F.A. Youth Cup Final triumph over West Ham. Glasgow-born Wark, 18 in August, certainly made his senior-debut under fire, in that third dramatic F.A. Cup Quarter-Final replay against Leeds. Ipswich won 3-2, of course.