On 5 March 1951 Liverpool persuaded Don Welsh to move north from the south-coast town of Brighton to replace George Kay, who had retired for health reasons two months earlier. Welsh already had links to Merseyside because he had been a popular guest player for Liverpool from 1943-1945 during World War II, scoring 44 goals in 39 games, and had also been keen to join Liverpool as a coach, a move his then employers Charlton Athletic refused to allow. It was at The Valley in the mid-1930’s that Don Welsh enjoyed his most successful time as a player. He was the inspiration behind a meteoric rise that saw the South-London club top the Third Division South in 1935, promoted as runners-up to second division champions Manchester United in 1936 and then finish as runners-up to United’s neighbours City in the top division just a year later. After the war, Charlton’s League form faltered but Welsh helped them reach the FA Cup final in 1946 and 1-0 extra-time victory over Burnley in 1947.

With his playing days over, Welsh started his managerial career at Brighton & Hove Albion in November 1947. He was then 36-years-old. Brighton finished bottom of Third Division South at the end of the 1947/48 season but there was no automatic relegation in those days and it was very hard for a club to enter the Football League at the expense of another that had been established there for a while, however poor their results were. Brighton recovered to finish sixth and eighth in the next two years before Liverpool came calling for Welsh’s services. Welsh was appointed Liverpool manager on 5 March but was in charge of Brighton until 21 March. A simple three-page letter on headed notepaper in copper-plate script doubled up as Welsh’s contract. He was paid £1,500 a year for three years with an addition of £500 for expenses. Welsh hadn't even been applied for the job and was thrilled to accept: "Liverpool asked me to go for an interview. The next day I was told that they had agreed to appoint me. It’s a wonderful opportunity to put my ideas into practice." Welsh wanted to make training less monotonous and aimed to cut out the ceaseless lapping of the track, and instead the players would keep fit by playing recreational games like leap-frog and tunnel-ball.

Unfortunately, Welsh inherited a Liverpool team that had been stagnating in mid-table for a few seasons and a board of directors that didn’t seem particularly ambitious. The Balmer/Stubbins era would shortly come to an end and the team relied too much on the mercurial Billy Liddell, but even the Scotsman couldn’t stop the team’s slide down the table. Despite strengthening in December for around £45,000 with David Underwood (Watford), Frank Lock and John Evans (Charlton Athletic), Geoff Twentyman (Carlisle) and Tommy McNulty (Manchester United) the club finished bottom of the pile with only nine victories and 28 points. Manager Don Welsh was downhearted but optimistic. "They were good signings, but they came in at a bad time. Things were bad and confidence was low. Now for a new start, with all the players pulling together. From the Chairman right down to the youngest member of the ground staff, we are all resolved to win promotion in one season."

Welsh kept his job but the writing was on the wall when the club could only manage an eleventh place finish in 1955 during a season that included a terrible 9-1 humiliation at the hands of eventual champions Birmingham City. Welsh spent a lot of money for the time but a lot of it was on players who were either past their best or didn’t show the form they had been deemed capable of. The directors believed that a change was needed and Welsh was dismissed at the end of the 1955/56 season. "I came to a sudden decision and handed in my resignation," Welsh told reporters. "I may quit football."

After leaving Liverpool, Welsh became a publican for a while in the West Country before the lure of football brought him back into club management again, this time at Bournemouth in the newly-formed and non-regional Third Division just before the start of the 1958/59 season. After two average seasons finishing twelfth and tenth, he was dismissed in February 1961 following a string of poor results. He managed non-League Wycombe Wanderers for a brief spell between July 1963 and November 1964 before returning to the club where he had enjoyed such success as a player, Charlton Athletic, to become a member of their administrative staff.

Don Welsh was not a success as Liverpool manager, however much he wanted to join the club following his popularity as a war-time guest player and however hard he tried to turn things around after succeeding George Kay. The 1950’s was not a good decade for Liverpool Football Club, apart from reaching a cup final at the start and appointing Bill Shankly at the end. Maybe Welsh was the wrong man at the wrong time? Unfortunately, the club was in a worse state when he departed than when he arrived.

John Martin followed the team's fortunes when the team got relegated in 1954.

"I liked him. He was always passionate about the game. He inherited a lot of players in their thirties when he arrived but I'll never forget him because he gave my chance." 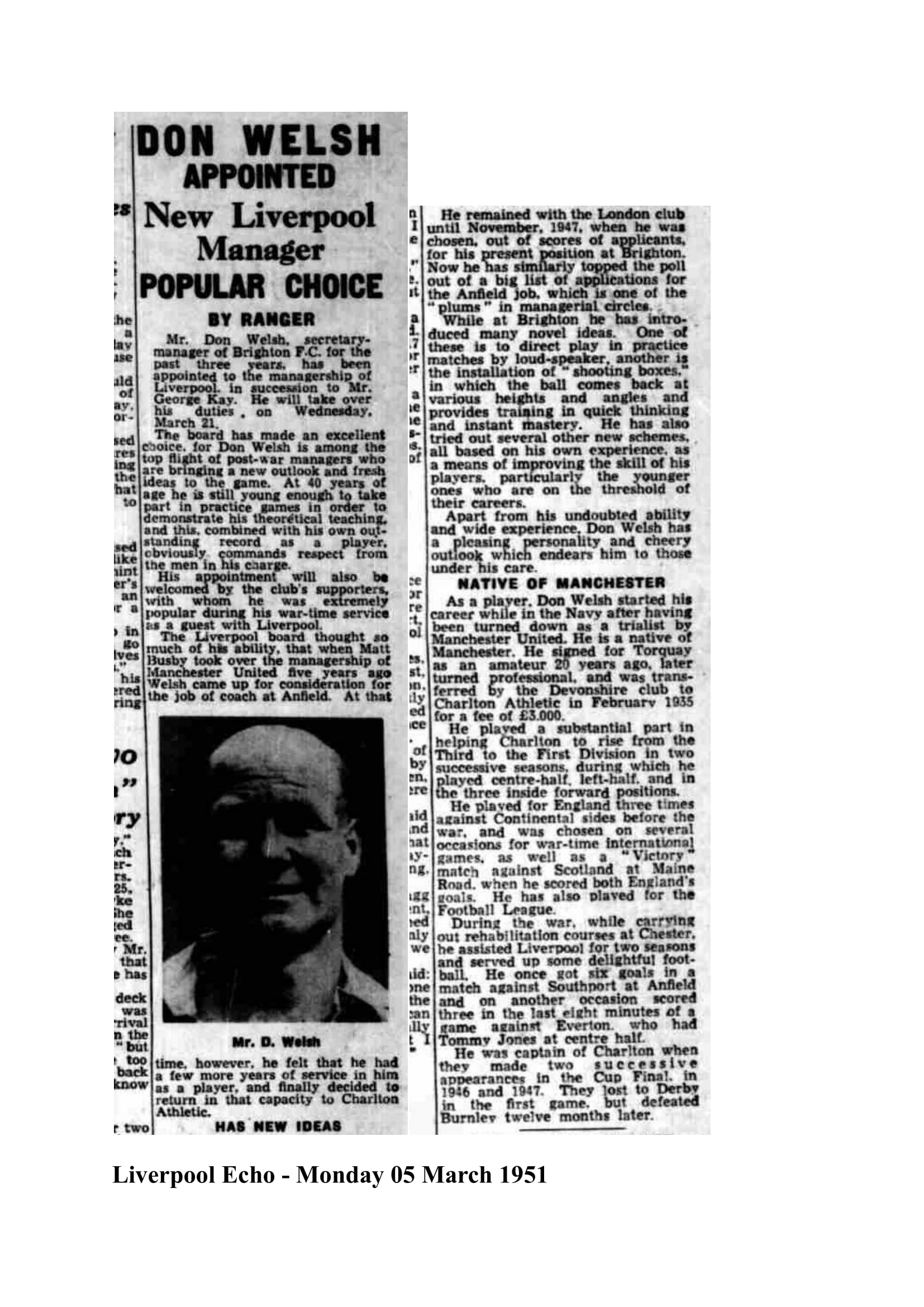 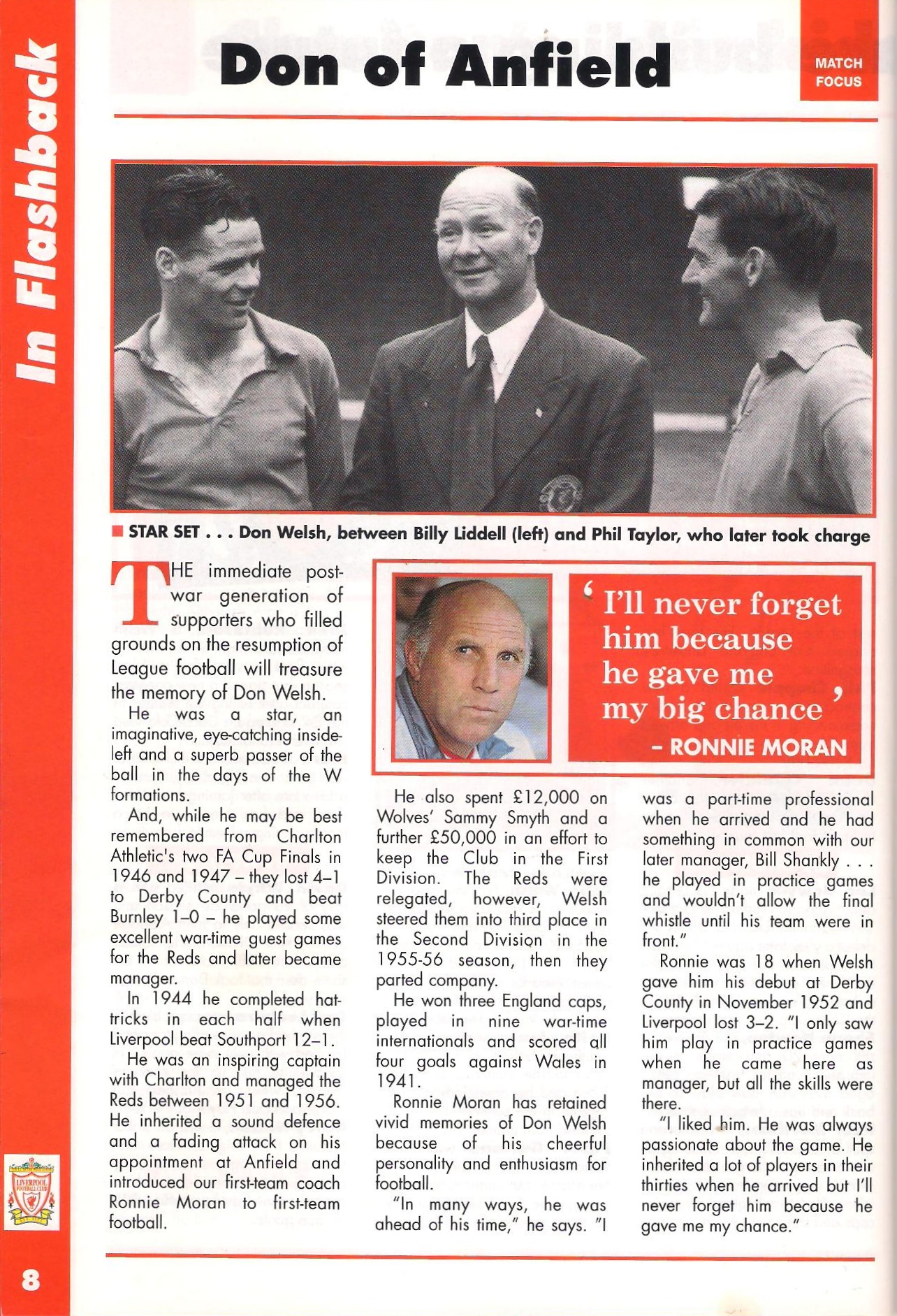