After appearing for Wolves during the war Sidlow was deemed surplus to requirements as the League resumed due to the emergence of future England 'keeper, Bert Williams. The thirty-year-old jumped straight into George Kay's team and before the final league game of the season he was in a curious situation. Manchester United, Stoke and Wolves had the chance to win the title along with Liverpool and fate would have it Sidlow faced his old team at Molineux. Sidlow was still living in Wolverhampton and was neighbours with Wolves' goalkeeper, Williams. Bob Paisley recollected Sidlow's "plight" in his book ‘My 50 Golden Reds’: "He trained with Wolves throughout the week, linking up with us on match-days only. So you can imagine what it must have been like for him having to walk down the streets towards Molineux that Saturday afternoon. They were his mates he was playing against and he knew that, unlike us, he would have to suffer whatever the result. If we won – and deprived Wolves of the title – then he knew he wouldn’t be able to walk out of the front door of his little house in Wolverhampton without folk pointing at him as the man who had stopped their team becoming champions of the Football League." Billy Liddell, Liverpool's talisman, was impressed by Sidlow's performance in Liverpool's 2-1 win that eventually sealed the title for the Reds: "Cyril made save after save when it seemed certain that he must be beaten." Sidlow couldn't resist to pay a visit to Bert Williams next door: “After I had received my League champions’ medal, I took it round to Bert to show him. I don’t know whether he appreciated that very much!"

Sidlow kept his place for most of the next three years and helped the club reach its first Wembley Cup final but it ended in disappointment with a 2-0 defeat to Arsenal. Sidlow conceded four goals in his final Liverpool appearance in a home first division game against Newcastle United on 4 November 1950. The much-younger Russell Crossley who replaced Sidlow had ironically been recommended to the club by the Welshman himself. "Russell did me a good turn when I was in the Army. When we had matches to play for the Army team he would play so that I could get off and play for Wolves in the wartime leagues," Sidlow explained. "He wasn't as old as I was and when he came out of the Army I told George Kay that he should sign him up and he became my understudy for a season or so before taking over." Sidlow moved to neighbours New Brighton in the Lancashire Combination after he had been released at the end of the 1951/52 season. He returned to Wolves in 1953 as an emergency cover for Williams. He did never turn out for the first team but did a good job of coaching youngsters at the club.

Sidlow became known for throwing the ball to his teammates rather than kicking it aimlessly up field. "Cyril was another in the long school of accomplished goalkeepers to be at the club," Bob Paisley said. "Reading the game was one of his major strengths and while sometimes that isn't quite as flashy as the goalkeeper who is diving about all the time, I know which style most outfield players prefer in their side. Maybe it was that ability which explained why he was never hailed as being as good as he was by supporters. A goalkeeper who is flinging himself about all over the place catches the eye and people will say: 'He's brilliant.' In fact, they are making it hard work for themselves whereas goalkeeping was an easy art for the big Welshman."

Published on 7 February 1949 in The Evening Express.

"As a youngster I had four ambitions. They were to get an amateur international cap, a senior cap, a championship medal, and a Cup winners’ medal. I have been fortunate enough to achieve the first three. What about the fourth? I’m keeping my fingers crossed." 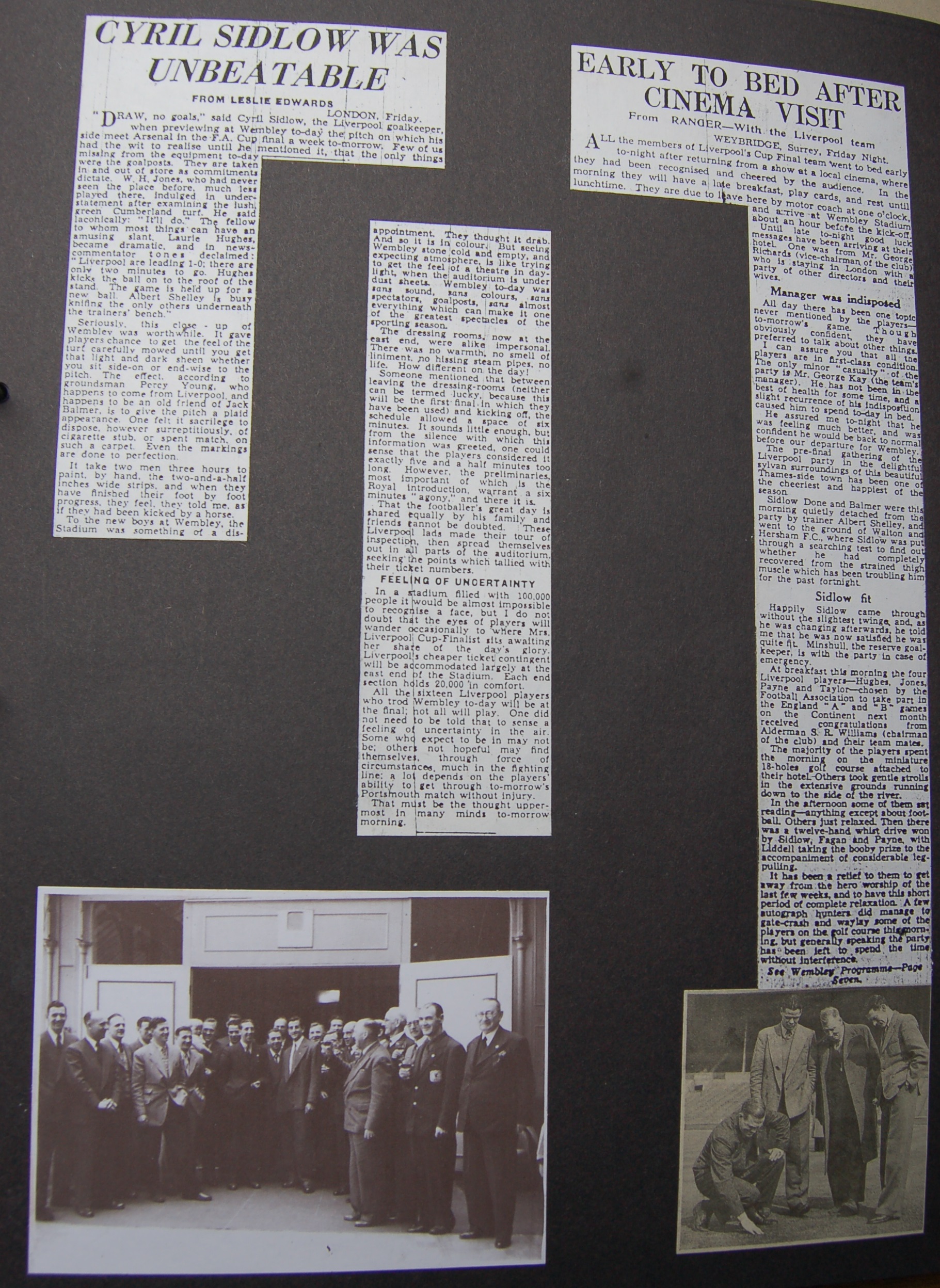 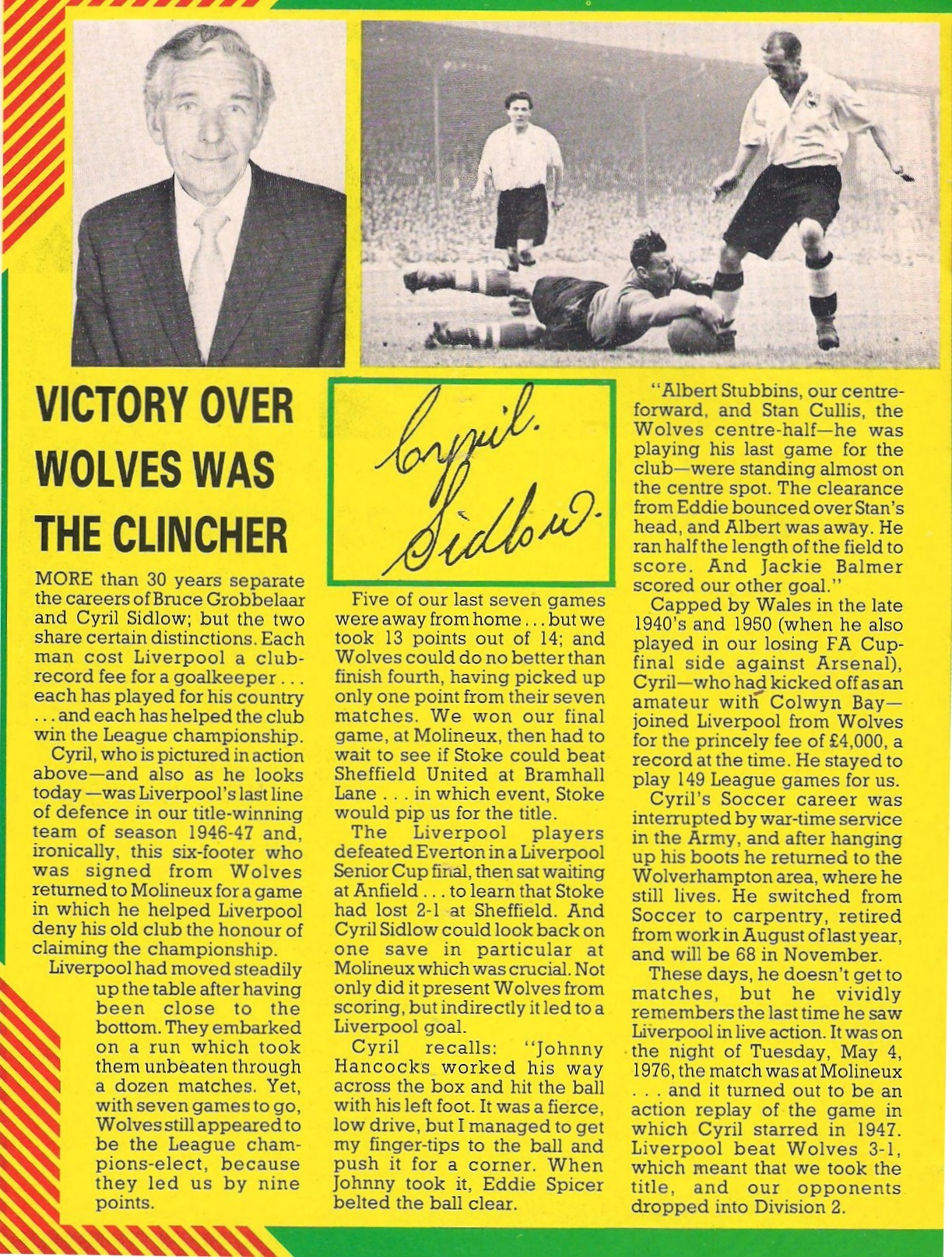 Victory over Wolves was the clincher