Patterson was appointed as assistant to secretary Tom Watson in 1908 and took over the leadership of the Liverpool team following his death in 1915. He was not officially appointed as his successor until 14 September 1918, as announced by the Liverpool Echo. ‘I (Bee) am glad that Mr. George Patterson has been appointed secretary of Liverpool F.C. He is a practical man, unobtrusive, and shows wisdom with pen and in football matters. He is following one of the best in the late Tom Watson, but has been well schooled, and will make good. In his football days he played a deal of football with Orrell and other clubs, but from an Army point of view his big frame is useless – he has an extraordinary number of wriggling bones that have been broken. Here’s to him!’

Patterson led the Reds through wartime’s chaotic local competitions in which, despite the fact that players were stationed all over the country and beyond, he could rely on a few who had performed for the team in the preceding years, even bringing legend Arthur Goddard back to Anfield. He also blooded youngsters who were to serve Liverpool well throughout the 1920s such as John Bamber (80 games/2 goals), Harry Chambers (339/151), Harry Lewis (70/12) and Tommy Lucas (366/3).

The Liverpool Echo included an announcement from Patterson on 25 July 1918 looking for personnel to feature for his team. ‘LIVERPOOL FOOTBALL CLUB are Prepared to Receive APPLICATIONS from Experienced PLAYERS, who are exempt from military service, for season 1918–19. Apply, stating age, height, weight, position, and club last played for, to George F. Patterson, Walton Breck-rd.’ When the league resumed in the 1919/20 season a distinction was made between being a ‘Secretary’ (that entailed duties performed by a modern ‘chief executive’), and ‘Manager’, the man responsible for the team’s results. In fairness the manager didn’t manage the team in the strictest sense of the word, as the board chose the first XI. Halfway through the campaign Patterson returned to taking care only of his secretarial duties after Liverpool had won seven out of 18 league games and were 18th in a league of 22. 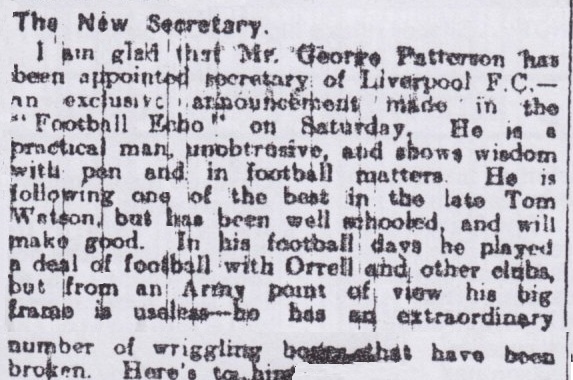