Prior to the Great War Bennett featured for South Liverpool in the Lancashire Combination, scoring 48 goals in 36 matches from 1913-15. When League competitions were abandoned as Britain engaged in warfare Bennett scored no less than 77 goals in 70 matches for Liverpool in the locally run competitions. Such was his goalscoring prowess that the Athletic News reported in 1918 that Bennett was the "Discovery of the emergency football of the period and has won such a reputation since November, 1916, that his future will be subject of tremendous curiosity when the fighters come back from the battlefields of two continents". Bennett was a ship’s plumber by trade and he worked at Harland and Wolff’s ship-building yard during the war. A friend of his described him as "One of the most unassuming and gentlemanly footballers I have met. Quiet, steady, clean spoken, clean living, he takes great care of himself, for he is temperate and a really genuine chap". Bennett was born in Walton, Liverpool but emigrated to St John’s, New Brunswick in Canada when he was only 12 years of age. When his family moved to Montreal Bennett played "soccer" for Montreal Royal Rovers for six years. Bennett moved back home and was rejected by Everton after a trial in November 1913 before embarking on his goalscoring spree for South Liverpool and then finally Liverpool.

Bennett's solitary "official" game for Liverpool came in the ninth match of the 1919/20 season, away to Chelsea when he replaced Fred Pagnam, who had played in all eight previous matches. But Bennett never played for Liverpool again and neither incidentally did Pagnam. Sadly Bennett was suffering from tuberculosis and was awarded a benefit match at Anfield on 27 September 1920 featuring Liverpool against an International XI. At the end of 1920 it was reported that Bennett was thoroughly fit again so he went for a month's trial at Liverpool but wasn't signed by the club as he had clearly not recovered sufficiently. He made four appearances for third division north Rochdale in 1921, scoring one goal. Bennett's health never recovered and he died on 11 January 1923 at the early age of 31.

"The Liverpool centre does not owe his success to mere physique, for he is only 5ft. 7½in. and 11st. 5lb. With a slight tendency towards roundness of shoulders, and his arms hanging like loose ropes, he looks even less. Like so many football players he carries himself in a style which does not suggest the athlete, although sturdy on his legs. As he blows into the palms of his folded hands, like John Tyldesley used to do, he is not an impressive figure until the ball comes his way, when he is impelled by instantaneous activity, and becomes quite another man. His speed is an asset, and be assured that he does not slouch near goal. Immediately he brings a ball right under control, and with a swerving dribble, often veering to the right, he is an adept at creating a position. Like Harry Hampton he makes most use of his right foot, and aims accurately from many angles and with little space to fire at. His heading, especially at centre into the goal area, is a move to beware of."

Bennett’s characteristics according to The Athletic News/Sporting Chronicle in February 1918. 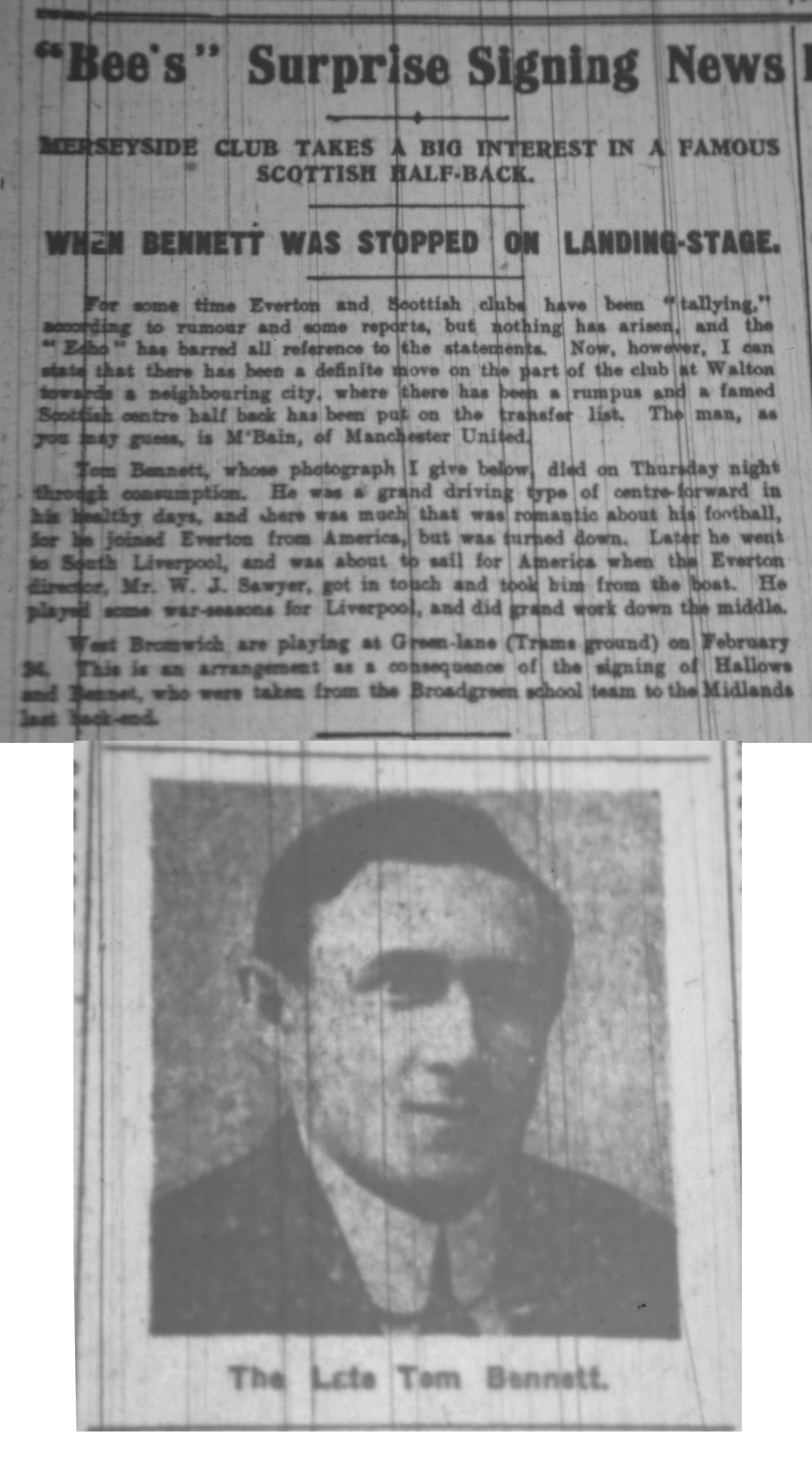