John McNab was more commonly known as 'Jock' because of his Scottish ancestry. He arrived on Merseyside in November 1919 and made his debut for the club at home to Manchester United on New Year's Day, 1920. He also played in the next first division fixture at Sheffield United two days later but those were his only 'starts' in 1919/20 and he was only selected once in the following season. John Bamber started 1921/22 at right-half but four games into the season he was struck down with appendicitis. Francis Checkland deputised for Bamber in the next five appearances but McNab came in for the tenth match against Preston North End and only missed four first division games until the end of the season, picking up a League Championship medal in the process, something he would also experience a year later, when he missed just three of the 42 matches. McNab continued to be a regular in the club's defence for another four years, but missed two months of the 1923/24 season when he suffered major facial injuries when he hit the windshield of a taxi he was travelling in. McNab moved south to join Queens Park Rangers at the end of the 1927/28 season.

Scotsman McNab was a tough customer on the field described as "tall, stouthearted, and of great staying power. He has fitted the Liverpool half-back line, added weight and strength to it, and his enthusiasm carries him far." The Derby Day Telegraph reckoned his "robustness is sometimes a mistaken idea, he’s so big and strong that he can’t help opponents tumbling down when they barge into him." Evidently his enthusiasm got the better of him on 14 February 1925 when he was sent off for kicking a Newcastle player. His teammate Walter Wadsworth was sent off as well along with Newcastle's Urwin. An amusing postscript to the game was when Wadsworth and McNab were bemoaning their luck after being sent off, there was a knock on the dressing room door. 'Who is it?', asked McNab, and was told it was one of the club's directors. 'Bloody hell, has the ref started to send the directors off now?', came McNab's response.

After he finished playing, McNab went into the licensing trade, taking charge of the Jawbone in Bootle. He died there on 2nd January 1949 and is buried in Bootle Cemetery.

No love on St. Valentine’s Day

"McNab’s physique is tremendous. He has height, weight and determination, and never knows when he is beaten. In addition he has a very strong shot."

McNab was a real hard nut, whose idea of getting ready for a match was to have a couple of pints of Guinness. In one match at Newcastle, which got a bit out of hand, McNab was sent off for throwing a handful of mud at another player and he was followed to the dressing room by Wadsworth a few minutes later.

While the two of them were bemoaning their luck, there was a knock on the dressing room door. 'Who is it?', asked McNab, and was told it was one of the club's directors. 'Bloody hell, has the ref started to send the directors off now?', came McNab's response.

Liverpool Echo reporter on Jock McNab, who was sent off against Newcastle on 14th of February 1925 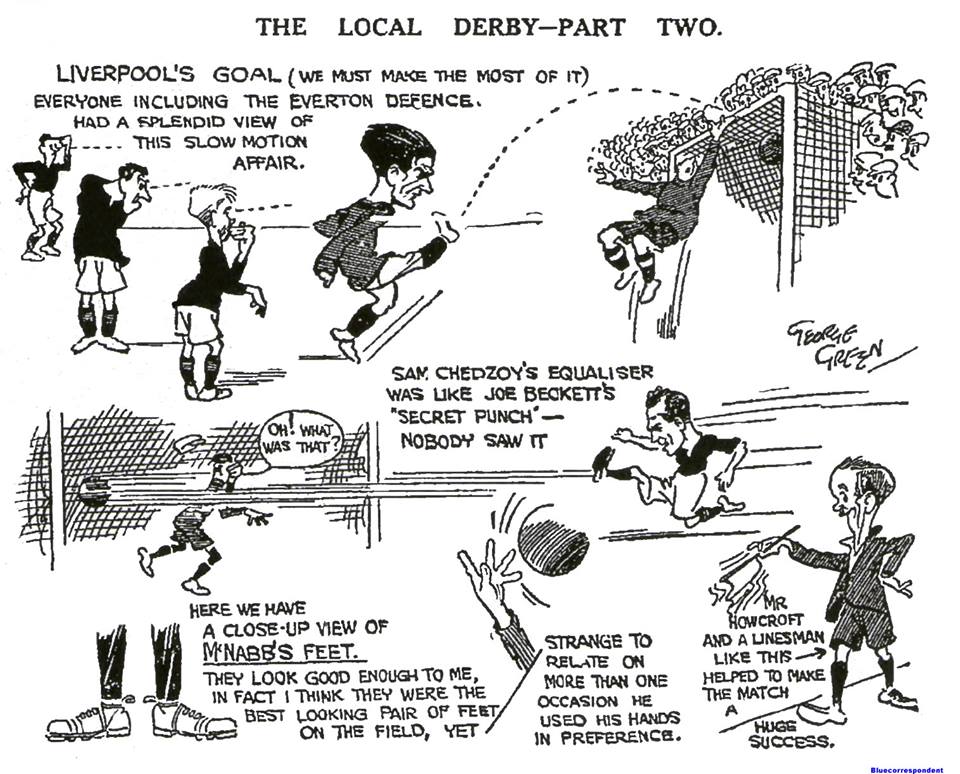 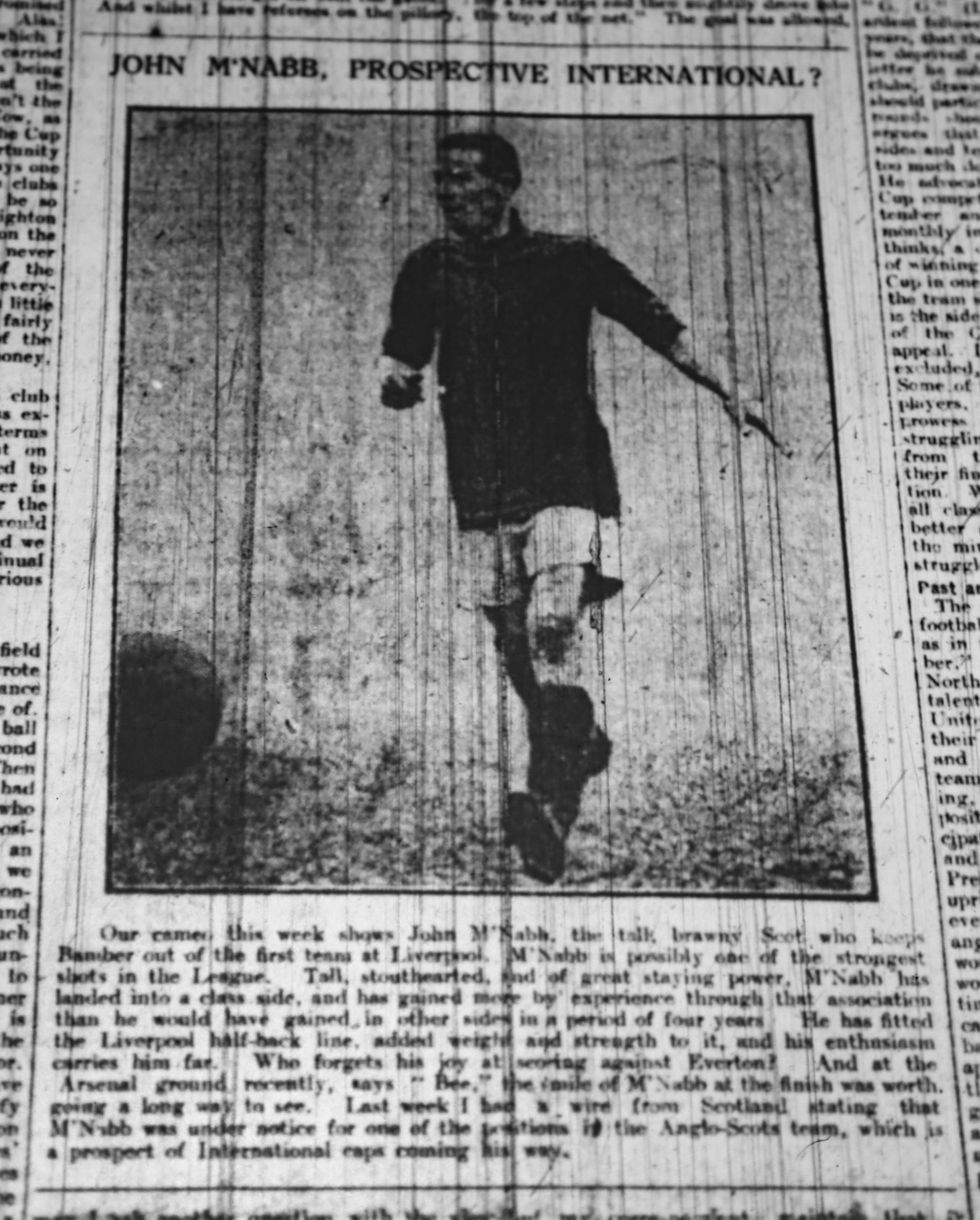 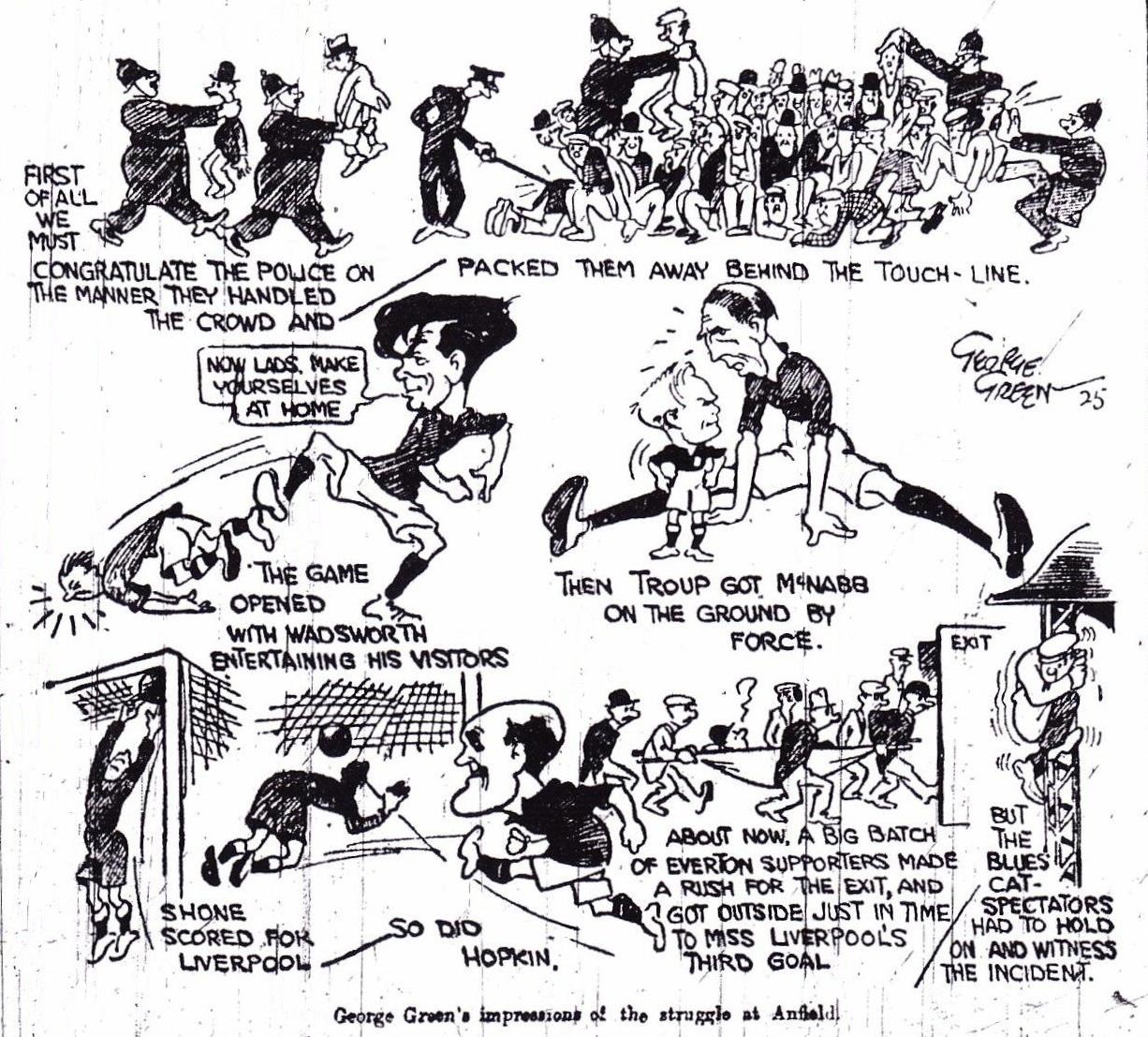