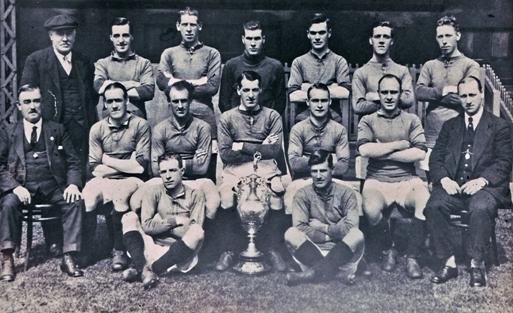 David Ashworth took his champions on an pre-season tour to Italy, leaving Lime Street station on 17th May seven days after losing the Charity Shield vs Huddersfield 0-1. Liverpool travelled for two days through London, Dover, Calais and Paris to get to their headquarters in Milan. The team relaxed for a couple of days taking in the sights of the islands in Lago Maggiore, the second biggest lake in Italy and went by cableway up Monte Mottarone which has an astonishing view over the alps. 8 days after departing for Italy Liverpool faced their first adversary on their tour; travelling companions Burnley. Liverpool lost 0-1 in Milan and played various Italian sides in the next two weeks. Tom Bromilow wrote a column for the local press unimpressed by the tactics of the Liguria and Toscana select: "I have never played in such a game wherein so much hacking, kicking and pushing was tolerated. In fact, the home side indulged in everything except biting." 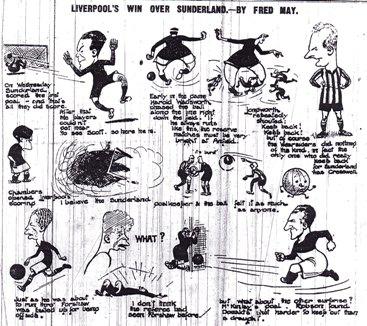 There was no personnel change of any consequence in the summer and manager David Ashworth was optimistic: "We ought to have a very good season. There is perfect harmony from the boardroom to the dressing-room and that goes a long way." Champions Liverpool started the 1922-23 season with a convincing 5-2 win over Arsenal at Anfield where Dick Johnson grabbed a hat-trick. Johnson scored 13 goals in 27 matches in the 1920-21 but had missed the 1921-22 season through injury. Liverpool played away against Sunderland and but disappointingly lost both games 0-1. A week later Sunderland played at Anfield where Liverpool their loss at Roker Park in impressive fashion. Liverpool scored five after Sunderland took the lead, the pick of the bunch being Harry Chambers' thunderous shot that literally burst the ball en route to goal and MacKinlay's solo effort after picking up the ball from the half-way line finishing with an unstoppable shot.

Liverpool went absolutely rampant vs Preston winning 3-1 at Deepdale and 5-2 at Anfield where Dick Forshaw scored a hat-trick and five goals were scored in fifteen minutes. Liverpool showed their strength by beating last season's title rivals Burnley but lost 0-2 in the return match at Turf Moor a week later. Liverpool Echo revealed that before the Turf Moor game Elisha Scott, Dick Johnson and Walter Wadsworth had each been offered 10 pounds to lose the game. The honest trio reported the attempted bribe to the Liverpool board.

54,368 were ready for the first Merseyside derby of the season at Anfield at 7th of October 1922. Liverpool lined up: Scott, Longworth, MacKinlay, McNab, Wadsworth, Bromilow, Lacey, Forshaw, Johnson, Chambers and Hopkin. The weather was ideal and The Kop full to its brim as the Liverpool Echo reported:

"The day was gloriously fine, but all assembled knew this was the calm before the storm. The Anfield pitch was looking as good as it ever has before , but I would think it would have as many scars as the players at full time. As there was a big early raid on the Kemlyn Road stand, which offers so good and close a view as one can get anywhere in the country. The buzz around the Spion was that Liverpool would be closing the gap in Derby History this game and the state of the market before read; Liverpool 12 wins, Everton 20 wins with 12 draws."

"The crowd had plenty to keep them interested before the battle commenced. There were the boys who ignored the barbed wire to get in. There was the Postal band playing a merry jingle and there was also the latest method adopted for removing young boys from the top to the bottom of the kop. The assembled Dockers had formed their own umbrella method, the lads over the top of heads, so the wee lads could reach their final destination by the wall at the front. Liverpool won the toss, thus ensuring they attacked their beloved Kop in the second half and also left Fern to be blinded by the sun, which was dazzling today."

The reporting at the time was on occasions and very humourous: "Liverpool right on the doorstep of success, thanks to a successful feint from Forshaw. He hammered the ball across to the middle and Johnson looked sure to score until Fern and he collided with a mighty crunch. McDonald walloped the ball clear over the stands into Mrs Molyneux’s back garden in Kemlyn road. She would return the ball while complaining that it had scared one of her rabbits half to death. No stew tonight then."

Everton took the lead in the 17th minute when McKinlay misplaced his back pass. Later in the he made sure his back pass was not so weak: "At this time the Liverpool defence started to take liberties, all saw themselves as attackers and often left MacKinlay alone at the back. On one of these McKinlay passed back to Scott with such venom, it brought a magnificent save out of Elisha. Scott was not amused by the accompanying wink and nod McKinlay’s back pass to Scott in the second half was probably the most powerful shot of the match, but I suppose you could forgive him after his earlier lightweight pass that led to Everton’s first goal." 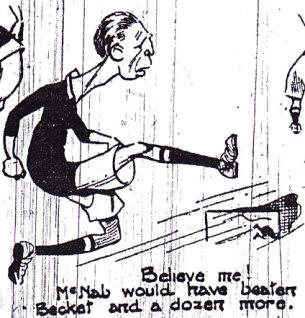 Chambers' first goal in the match would hardly be credited to him these days by the dubious goals committee: "Hopkin placed the corner and quickly crossed to the near post where Chambers was waiting. Chambers header hits the bar. The ball comes off the bar, but in trying to catch it, Fern punched the ball into his own net. In his joy at equalising, Chambers swung on to one of the uprights and hung on to it in a manner of a music hall horizontal bar performer. After witnessing this, I would suggest footballers leave acts like that on the circus circuit."

Liverpool enjoyed playing their old rivals and Chambers was not the only one who celebrated a goal in style: "Two Chambers headers both came before a third cross was back headed by Forshaw into the path of McNab. He had all along been running ahead to make a sixth forward and now he found himself with a cross-grained shot and quite a good angle on goal. He fired in a ferocious shot, that hit the back of the net before Ferns had moved an inch. He celebrated his goal by leaping for joy and completing a Scottish Hornpipe." (Click on this link to see the Scottish hornpipe being performed)

Chambers completed his hat-trick by scoring two goals in two minutes, including the goal of the game: "Lacey played a ball up to Johnson, who headed to Chambers. Chambers pushed the ball wide for the advancing Lacey. Lacey controlled the ball and played it back into the path of Chambers. "Smiler" Chambers thumped the ball home. His grin was as big as a Cheshire cat."

Birthday Boy tapped in Liverpool’s fifth from close range. The Echo reported that "The crowd, following up on the suggestion in BEE’s Comments a fortnight ago, started the new chant of the Kop.

This was the first time Liverpool had scored five goals vs their archrivals. According to the new league Liverpool and Everton faced each other a week later at Goodison, Liverpool victorious again by one goal to nil, scored by Dick Johnson. Liverpool won four out of the next seven games and by early December, after 18 out of 42 rounds had been played, were top with 25 points, Sunderland second with 24 with Burnley and Middlesbrough following on 22. 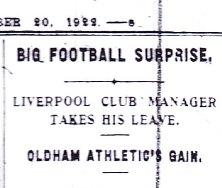 Liverpool  heading for the title again under Ashworth's wise guidance. Liverpool due to play Ashworth's old club, Oldham, home and away on 25th and 26th of December. Only one week prior to the games, the rumour was that Ashworth would be in charge of Oldham rather than Liverpool come Christmas. Liverpool Echo asked Ashworth if these rumours were true, but as Echo's Bee's Sports notes reported on 19th of December: " Ashworth, manager of the Liverpool Football Club asks me to deny the story that is all over Oldham that he is about to become their manager."

The following day, it was evident that David Ashworth had lied to the Echo: "The Echo learns today that there was smoke where there was . It will be remembered that we stated yesterday that the Liverpool Football Club manager, David Ashworth, denied that he was to successor of Charlie Roberts, the ex-Manchester United captain, who has been acting as manager for Oldham Athletic for two years. To-day we learn by wire that Ashworth has signed as for Oldham, a side that he spent so many years with and with which he was connected when they finished second in the Football League in 1915."

" Ashworth's earliest managerial work was with Stockport County and he joined Liverpool three years ago. These have been Liverpool's most successful years, financially and in a playing sense, therefore it will come as a severe shock to all football supporters that Ashworth has seen fit to leave Liverpool at their zenith and join Oldham in the depths. At any all Liverpool will be surprised that a change has been made, for there had been no suggestion of any movement in connection with the Liverpool Football Club for some time."

Few could understand why on earth Ashworth had decided to leave a team in 1st place with almost twice as many points as Oldham in 21st position out of a league of 22 teams with 14 points. Ashworth had evidently moved for family reasons as he wanted to live with his wife and daughter, who were both invalids, in their home in Stockport which was only 11 miles away from Oldham comparing to 43 miles from Liverpool. For the Oldham got relegated in the 1922-23 season.

Needless to Liverpool didn't lack encouragement when faced with Ashworth's Oldham side on Christmas Day and Boxing Day. Oldham suffered from "frequent hesitancy and bad tactics" and Liverpool won 2-0 at Boundary Park and 2-1 at Anfield, the latter also served as Elisha Scott's benefit game. 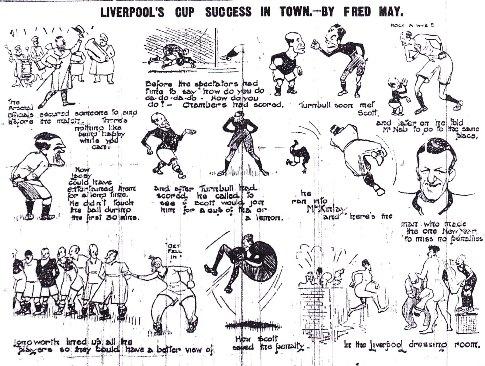 Ashworth's departure failed to knock Liverpool out of their stride. From 30th December to 10th February managerless Liverpool didn't concede in 7 league games, winning 5. Liverpool also beat Arsenal 4-1 in a  FA cup replay where Harry Chambers netted two and Elisha Scott saved a penalty from Turnbull. As can be seen in the cartoon by Fred May above, Liverpool' players were clearly used to quite some service in the dressing room after showering.