Tom Watson liked the look of the bowlegged, pigeon-toed and ever-smiling Northern boy who knocked on his door in 1915. Henry "Harry" Chambers turned out to be the last player Watson ever signed for Liverpool before he passed away on 6 May 1915. Chambers only played a couple of reserve games for Liverpool before League football was suspended due to World War I. He became a soldier but was soon invalided out of the Army and while convalescing in Ulster he guested for Belfast Distillery and Glentoran. Chambers had a lethal left foot and a brilliant football brain and was a key member of the Liverpool team that won the First Division in successive seasons from 1922-1923, scoring 41 goals in 71 matches. Chambers was the club's top-scorer for four successive seasons from 1919/20 to 1922/23. He only scored seven goals in the 1924/25 season after being out with injury for the first two months of the campaign.

"Smiler" played eight internationals for England scoring five goals from his debut on 14 March 1921 in a British Home Championship game against Wales in Cardiff until his last selection on 20 October 1923 against the Irish at Windsor Park in Belfast. His debut goal came in a friendly against Belgium on 21 May 1921 in Brussels. He scored England's both goals in a 2-0 win over Ireland on 21 October 1922. His second was England's 400th goal. He scored his fourth and fifth final goal against Wales and Belgium in March 1923. Liverpool fans were shocked to hear in March 1926 that Chambers wanted to leave the club and had been placed on the transfer list. This was described no less than the “biggest noise in the football world.” Chambers was the darling of the supporters due to his cheerfulness, which rubbed off on everybody around him. He had scored nine goals in the 1925/26 season but since netting a hat-trick against Newcastle on Christmas Day had only scored once in two-and-a-half months. Thankfully Chambers found his scoring instincts again, netting seven goals in the remaining eleven games of the season and was the top-scorer of the team the following season by scoring 21 goals in 46 games.

After playing nine games without getting on the scoresheet in his final season, 1927/28, Chambers was knocked down by a car whilst riding a bicycle. He later failed to recover damages for the incident in court. Chambers said through the accident he had lost his form and failed to win back his place in the Liverpool team. A doctor said he could not discover anything physically wrong with Chambers and that his loss of form might be due to anxiety over the result of the court case. After an absence of two months from the first team Chambers returned, adding four goals taking his total for the club past the 150 mark before he was transferred in March 1928 to West Bromwich Albion who had just been relegated from the First Division. Chambers was by that time aged 32 and maybe had slowed down a bit, but he was still very adept at reading the game and was reverted to centre-half with resounding success. Chambers joined Hereford United from Oakengates Town in the Birmingham League in January 1933. He played a total of 18 times for Hereford during 1932/33 before returning to Oakengates the following season, playing for the club until he was 51! He passed away all too soon on 29 June 1949, aged 52.

Many thanks to Ron Parrott, Hereford United Club Historian, for giving accurate info regarding Harry's time at Hereford and Oakengates.

Many thanks to Ron Parrott, Hereford United Club Historian, for giving accurate info regarding Harry's time at Hereford and Oakengates. 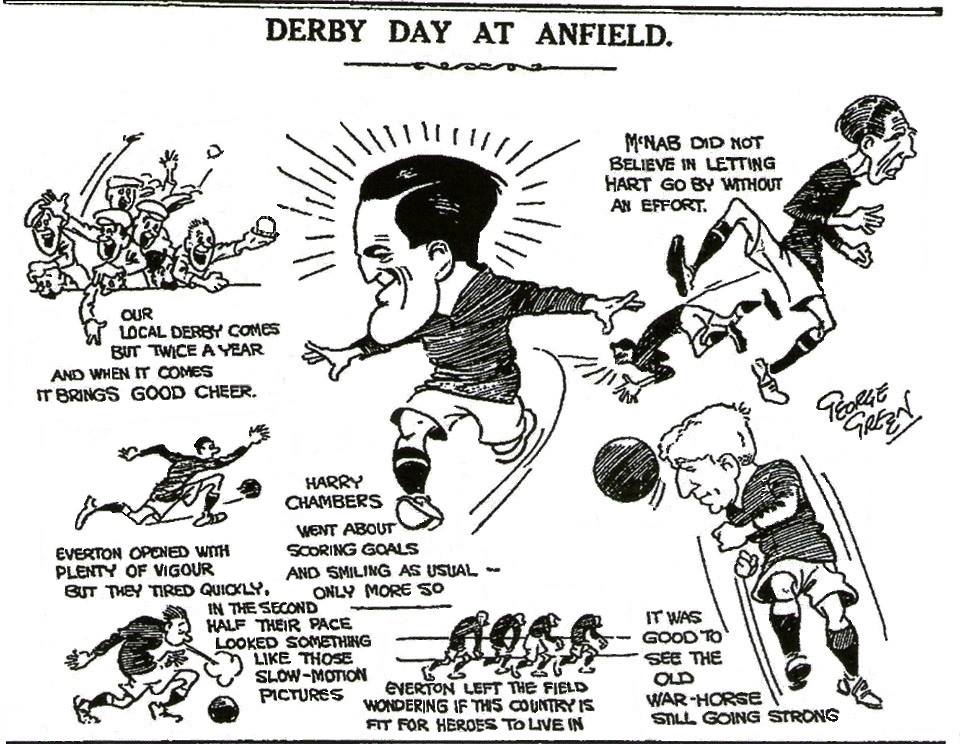 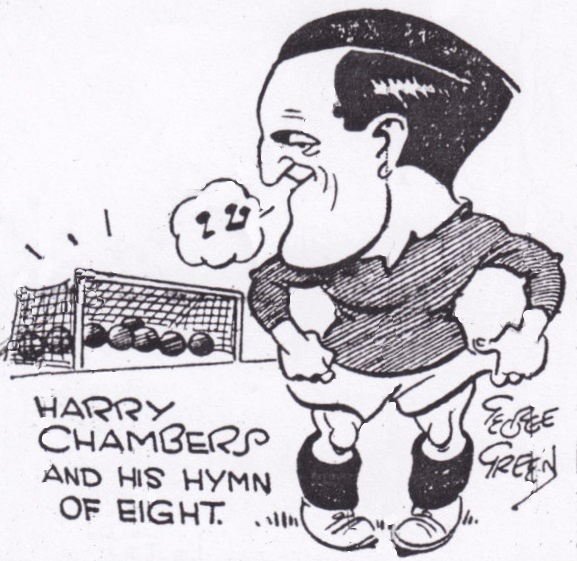 Harry Chambers and his hymn of eight (sketch) - October 1934 Harry Chambers' views on training in the Echo in October 1928