After World War 1, the League was played in a different format, where two clubs faced each other home and away in the space of eight days. Liverpool had finished the 1919-1920 and 1920-1921 seasons in fourth place. Ahead were two seasons of Liverpool's dominance. The Liverpool team was ready to blossom under manager David Ashworth.

Ulsterman Elisha Scott was in goal. Elisha was one of the great goalkeepers in Liverpool's history, if not the greatest. His Anfield career spanned an astonishing 22 years since his arrival in September 1912 until he left in June 1934. Everton great, Dixie Dean, said Elisha's swearing on the field was terrible and could be heard all around the ground.

Right-back was Ephraim Longworth, who solved a long-standing right-back problem when he signed for Liverpool from Leyton in the summer of 1910. He is one of the most consistent defenders Liverpool have ever had on their books and one of only a handful of Liverpool players to ever captain England.

Left-back Donald Mackinlay was only 19-years-old when he signed from Newton Villa in 1910. He was Liverpool's captain from 1921-1928. MacKinlay's versatility in being able to play in a number of different positions and his from free-kicks brought him 34 league goals. He was a Red through and through if there ever was one as evident in his interview with the Evening Express on 25th January 1923: "Red is my colour. I'll play for Liverpool as long as they will have me. I don't want to play for anybody else and when I pull off the red shirt for the last time I expect I will finish with football, at any rate as a player."

The full-backs played together for 18 years which is a record for any pair of full-backs in the Football League's history. Scott, Longworth and MacKinlay are all legends at Liverpool, having played a total of 1,273 games for the club.

Bootle-born Walter Wadsworth was a tough customer at the heart of Liverpool's defence and played 242 games for Liverpool as well as 112 wartime games. He was brutal on the field and Sunderland great Charlie Buchan, who despite scoring quite a number of goals against Liverpool, never enjoyed playing Wadsworth: "You never know what he's going to do next. He's so unorthodox and seems to 'get there' without disclosing his intentions."

John S. McNabb (as he wrote his name) or "Jock McNab" as the Scotsman was more commonly known, came into prominence as right-half in the 1921-22 season after only making 3 appearances in two years at Liverpool. Liverpool Football Echo best described him: "McNab’s physique is tremendous. He has height, weight and determination, and never knows when he is beaten. In he has a very strong shot."

Tom Bromilow was left half. He was a player who stayed in Liverpool's team until 1930 and played 375 games. 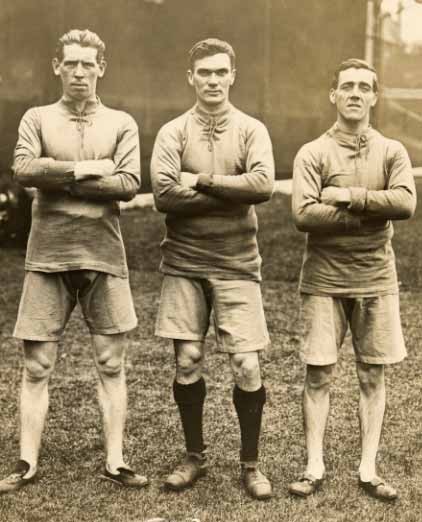 Tommy Lucas was a great utility player, who played 27 league games in the 1921-22 season, replacing right-back Longworth and left-back MacKinlay when they were out injured. The full-back pair avoided any injuries in the 1922-23 season so Lucas only featured once. His career at Liverpool recovered and he made further 287 appearances for Liverpool until his retirement as a 37-year-old in 1933.

Creative winger, Billy Lacey, was in the latter part of his Liverpool career in 1921, being 32-years old. He featured at half-back in the first two post-war but returned to the wing after his defensive years to a resounding success.

Liverpool's only significant signing before the 1921-1922 season was outside left Fred Hopkin, who was signed from Manchester United. He played a big part in Liverpool's strongest team to date.

Liverpool's main goalscorers were Harry Chambers, called "Smiler", as he always seemed to wear a huge grin. He was said to have the foot in the business. Dick Forshaw blossomed in the 1921-22 and 1922-23 seasons, scoring 20 goals in 46 games in each season and was the only ever-present in the side with 84 league games. Forward Dick Johnson missed the 1921-22 season through injury, but was important in the 1922-23 season, only missing 5 league games and scoring 14 times.

Sports Spectator commented on the Liverpool team at the time: "The players cost very little in transfer fees, only Longworth and Hopkin being anything like expensive, the remainder being locals who were secured at bargain prices." 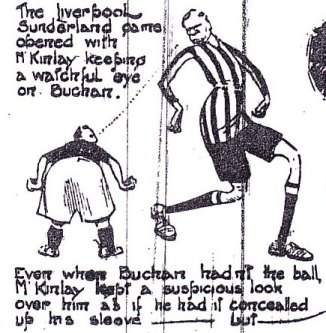 Liverpool suffered a bad 3-0 loss to Sunderland on the opening day of the 1921-1922 season where Liverpool's old foe, Charlie Buchan, who scored eight goals vs Liverpool in two games in the 1912-13 season, scored twice. Liverpool shook off this disappointment and won Manchester City 3-2. Next up was the chance to revenge their loss vs. Sunderland at Anfield. Donald MacKinlay and his fellow defenders tried to contain Charlie Buchan, but he managed to score once more, but that wasn't enough as Liverpool netted twice through Billy Matthews and Dick Forshaw. A rare victory as 1-1 was the most common result in the weeks to come.

Liverpool had clearly trouble in scoring goals apart from a 4-0 win vs. Preston on 15th of October. The highlight from this game was a controversial goal by Chambers after a goalless first half: "Lacey hit the ball so hard that the goalkeeper Fox, appeared stunned. Play went on and one wondered how long the referee would allow before he stopped play. Doolan went into goal and actually saved a shot, having to jump over the body of the true keeper, who in his dazed condition stood up and looked about him in fashion. Liverpool went on with the game and Chambers headed into the net, which was warmly debated by the Preston players but warmly welcomed by the home support. While Liverpool lined up for the , Preston players were still debating the decision with the referee, somewhat reminiscent of a Debating Society I used to frequent as a youth in college." (From Liverpool Football Echo).

Liverpool scored 4 goals in 12 minutes vs Preston and  2nd in the league table with 5 wins, 4 draws and 1 loss after 10 games, equal on points with Newcastle, but two points behind Champions Burnley.

Burnley finally gave way to Liverpool five rounds later when Liverpool captured 1st place for the first time in the season, after a resounding 4-0 win over Middlesbrough on 19th of November, despite having drawn 1-1 the previous three league games, among them both Merseyside derbies of the season. No team seemed up to yet to gain a few points lead on the rest. Liverpool was number one in the table, but Burnley and Sunderland were only a point away.