Liverpool had to shake off being routed 5-0 in the championship decider vs. Aston Villa in the last game of the 1898-1899 season, but had an abysmal start to the 1899-1900 season, losing 8 games in a row which finished the season early.

The local journalists were at loss at Liverpool's form: "The question now agitating most minds is whether Liverpool intend scoring any points in this season's League tourney. On present form they are not likely to do so. Whatever other failings may be placed to the account of the present Liverpool team, they cannot be charged with inconsistency for they continue to lose match after match, whether at home or abroad, with surprising regularity. If this be the true form of the players there is only one remedy. The reserve team couldn't fare worse; but it seems astonishing that they can have lost all their skill in a few month's summer vacation."

A tragedy overshadowed Liverpool's eight successive defeats. George Allan, Liverpool's greatest goalscorer throughout the years, had been reported too ill for pre-season training and died of tuberculosis only 24 years old on 16th of October 1899: "George Allan, Liverpool's centre forward, died at Elie, Fifeshire, yesterday morning. Allan was discovered and developed by Liverpool Football Club, and played for Scotland vs. England two years ago. He afterwards joined the Celtic for a season, but returned to Liverpool a year ago. He was the pivot in the team which took Liverpool into the semi-final stage of the Association Cup ties and ran up for the League championship. During the summer he was taken seriously ill, and although it was hoped a few weeks ago that he would recover, he has at length succumbed. Allan was a model centre forward, and Liverpool have suffered severly in losing him."

"The Anfielders" made a key signing in Sam Raybould in January 1900. The forward arrived from 2nd division's New Brighton Tower where he had scored 10 goals in 13 games. He made his debut for Liverpool vs. WBA where "the introduction of Raybould as centre forward was naturally regarded with keen anticipation". Raybould wanted to make a good impression, but despite creating great goalscoring opportunities for himself, he failed to find the net on his debut: "On three distinct occasions did Raybould find himself with the ball in front of goal, with only the custodian to beat. A first appearance with its attendant excitement must be taken as the only reason why the most recent acquisition to the club failed to credit his side with three goals."

From that day on Liverpool show a clear improvement: "Liverpool are still in a precarious position, but a continuance of the form shown against Albion should keep them clear of the dangerous shallows and treacherous currents of the Second Division." Raybould endeared himself though to the Liverpool faithful in his second game when he scored in the first minute of the Merseyside derby at Goodison Park. Everton, however, responded with three.

Raybould showed straight away promise he might be an important signing for the club as well as left winger Charles Satterthwaite, signed from Burton Swifts, who scored a hat-trick in only his second appearance against Glossop FC at Anfield on 23rd of December. Liverpool were on their way up the table. "Since the inclusion of Raybould and Satterthwaite in the team, matters have gone ahead with a smoothness which had almost become foreign to the play witnessed before their arrival, and the utility of a decent centre has never been more forcibly exemplified than in the case of the Anfield eleven this season."

Liverpool finished the season on a high after winning 8 out of their last 10 games, but 10th place in the League was a massive disappointment compared to 2nd place the previous year, but the club's greatest ever season in its 8 year history awaited!

Liverpool started the 1900-1901 season with a convincing 3-0 win over Blackburn on the 1st of September: "There was the same rousing cheer as the familiar red figures emerged on the green sward, which was in splendid condition. Liverpool are undoubtedly a well-balanced side, and as at present constituted will compare in physique and ability very favourably with any team they may be called upon to meet in the League tourney. They have opened well, and it is to be hoped they will continue likewise," reported the Liverpool Mercury.

The Liverpool Football Echo was optimistic for the season ahead, curiously praising Allah in the process: "Neither had Liverpool much to beat in Blackburn Rovers. Stoke will extend the Anfielders no doubt this afternoon, and if Tom Watson's boys prove victorious there will be some hope of realising the success which has been predicted for the Liverpool club. However, we have made a good beginning, and for that Allah be praised!"

The glorious first of September
Grand sport round Anfield and Preston - good bags.

First Rival Sportsman Molyneux: "Good morning, Tom! Having good sport.
What do you think of these?"

Second Rival Sportsman Watson: "Good day to you!
I am doing about the same as yourself.
Looks a promising season, don't you think!" 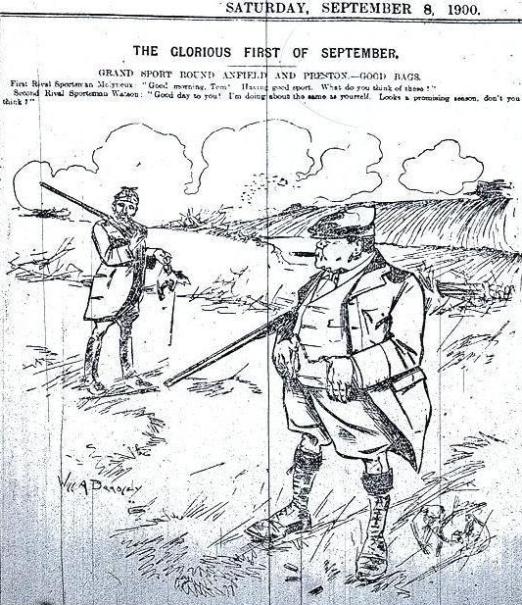 Liverpool's manager, Tom Watson, was portrayed in Liverpool Football Echo
as rather confident for the rest of the season after a 3-0 win in the first game.

The Reds scored 10 goals vs 1 in their first three games with Sam Raybould and Tom Robertson netting 4 and 3 goals respectively. Raybould was a future legend at the club and became the first player to score 100 league goals for the club, a feat he achieved in 162 matches between 20th January 1900 and 9th December 1905. His abilities were obvious to everyone: "He is a dangerous player when in possession, and backs who make mistakes might as well concede a goal straight away." Next up was the Merseyside derby. 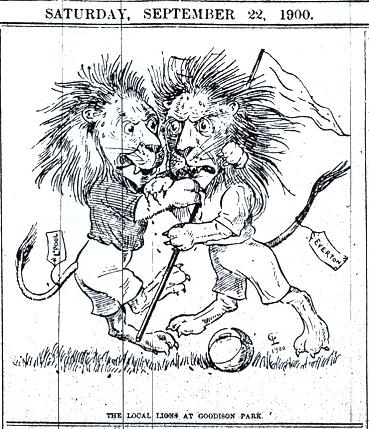 "The Local lions" as they were called met at Goodison Park on 22nd September and drew 1-1 in an entertaining game after "both commenced the campaign in glorious fashion, and had secured the full maximum of points for the matches played." In the next 6 league games, Liverpool won 3 and lost 3 and then faced their old foes Aston Villa who had won the championship two seasons in a row.

Liverpool took champions Aston Villa to the cleaners with a 5-1 win on 10th of November 1900 at Anfield. "The secret of their decisive victory was due to the excellent methods adopted by the forwards, which completely non-plussed the Villa defenders. No sooner did they gain possession of the ball than they were away with it without the slightest hesitation, and the passing, which was delightfully executed, was always forward, so that the Villa backs were often caught napping by the speed with which the movement was developed and brought to a successful climax."

Sam Raybould scored after five minutes play and his second goal was the pick of the bunch: "But the tit-bit of the afternoon was the fourth point which Raybould touched up at the finish. It came from a return almost on the home goal line, and Robertson tricking Noon in his old style, flashed along the touch-line to near the corner flag. Here he sent across to Raybould, who was coming along with a wet sail, and without the slightest check in his speed the home centre reached the ball just as it touched the ground, and George could only feel the waft of air as the ball crashed past him." 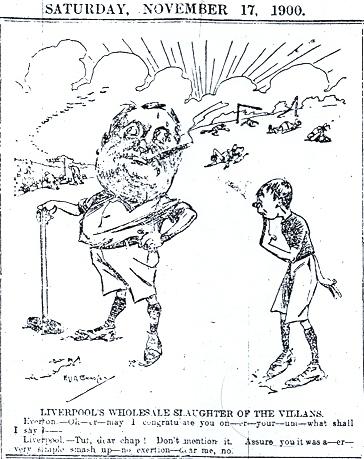 LIVERPOOL'S WHOLESALE SLAUGHTER OF THE VILLANS.
Everton - Ok-er-may I congratulate you on-er-your-um-what shall I say -
Liverpool - Tut, dear chap! Don't mention it.
Assure you it was a-er-very simple smash up - no exertion - dear me, no.