"[The players] slipped and floundered in the sad coloured clay in a quite smashing fashion, cutting such fantastic capers as caused the crowd to roar. It is always amusing to see a fellow creature making himself ridiculous..."

Liverpool struggled to impress following this outstanding win, inconsistency not worthy of a champions elect. On New Years’ Day 1901, the team was in 6th place, but only three points behind Nottingham Forest at the top and with a game in hand. Liverpool and Everton clashed at Anfield on 19th of January 1901. A record attendance had seen the derby at Goodison Park but continuous downpour kept fans away from Anfield which resembled a quagmire.

The decision to start the game at 2:45 instead of 3:00 to get the game over with as soon as possible because of the worsening conditions, already caused controversy because the ones that arrived around three o'clock had already missed the first fifteen minutes. Everton had the best of the play for most of the lively in difficult conditions as "before the play had progressed many minutes the players were almost unrecognisable on account of their mud-splattered garments." Everton took the lead in the 20th minute: "at last Taylor managed to drive the ball past Perkins, who would have been very lucky indeed if he had saved his charge."

A good move by Liverpool soon after the first goal could have resulted in a equaliser: "A good move on of Robertson and McGuigan provided the next feature of interest, the right wing men combining well, but when the men had got away beautifully, the sphere struck dead in a pool of water, enabling Crelly [Everton's left-back] to dash up and clear."

Everton got the upper hand again and "Everton attacked with great spirit, and considering the slippery and heavy turf the pace was kept up at tremendous rate. Several abortive shots were sent in by the Everton front rank, but the only one of importance was a brilliant attempt on the part of Settle, who put in a terrific shot, which Perkins negotiated in style."

Liverpool managed to equalise against the run of play in the 37th minute: "Liverpool made a sudden rush, Robertson starting the move, and getting the better of the opposing half and back, he swung the ball across, where Eccels and Booth each failed to stem the threatened danger. Cox, who up to this had been practically idle, pounced upon the ball like a greyhound and before Muir had realised what had happened his citadel was captured, amid a perfect hurricane of cheering."

Liverpool scored another goal just before half-time, but it was disallowed. After a great attack by the vivacious right-back Robertson who "finished with a clever shot which Muir endeavoured to save, and came a cropper in doing so. The ball passed into the net, but as in its flight it touched Walker's hand, the point was disallowed."

When the teams came out for the second half, they were both wearing clean, dry costumes and seemed ready for action, but the crowd noticed that team captains, Raisbeck and Settle, were in heavy discussion, "evidently discussing the advisability of abandoning the match, but the crowd loudly exclaimed, 'Play the game!'"

Both teams kept up admirable pace but “as time wore on matters became more difficult than ever from a player’s point of view, the churned mud and water rendering anything like accurate play quite out of the question and luck necessarily played a prominent part in the game.” Taylor scored the winning goal for Everton in the 62nd minute.

The spectators' will to see the game through was maybe to poke fun at the struggling players as "The Trifler" writes in his notes of the game: "[The players] slipped and floundered in the sad coloured clay in a quite smashing fashion, cutting such fantastic capers as caused the crowd to roar. It is always amusing to see a fellow creature making himself ridiculous, and the appearance of all the men after the game had been in progress five minutes would have made even the Sphinx smile. Having little else to laugh at, the humid spectators found amusement in noting the party-coloured pattern of Dunlop's pants, and the murky sadness of Proudfoot's profile. Then they looked at their own garments and the smiles faded into thin air."

It was painful enough to lose to their neighbours, but in the next game Liverpool lost to Notts County in the 1st round of the FA Cup and also the next league game vs Bolton. Liverpool's title charge seemed to be fading... However Tom Watson's current team beat his former team high-flying Sunderland 1-0 on 23rd of February and didn't look back after that. Tom Robertson, Sam Raybould and Jack Cox were sharp up front while Raisbeck marshalled the defence. Throughout March and late April Liverpool won 5 league games out of 8, drawing the other three, scoring 13 goals and conceding four.

Raybould and Satterthwaite scored one each as Liverpool beat the Blades and the Reds faced Nottingham Forest in the penultimate game of the season in “What may be looked upon as the decider in the League tournament, which all the world and his wife knows.” Sunderland had already played all their 34 league games and had 43 points to Liverpool’s 41 but the Reds had two games still to play. The weather was fine and so was Liverpool’s performance against Forest. Jack Cox gave the home fans something to shout about. “When the game had been in progress in about twenty-five minutes the home right wingers worked the ball up towards the Notts goal, and at the proper moment Robertson shot hard, and struck one of the goal posts, and rebounded to Cox, who promptly fastened on and placed the ball past Linacre. Liverpool’s goal, being cheered to the echo.”


William Goldie sealed Liverpool's win: "Liverpool had a plethora of free kicks to commence with, and from one which had an important result, as events will show, the estimable linesman aforesaid again made himself conspicuous. He objected to Robertson sneaking three inches of ground and pointed out the precise spot for the kick. As the result of the kick turned out all right, he was freely forgiven. The ball came to Goldie, who had it past Linacre in a jiffy, so that Liverpool were two goals up, and the ultimate result a long way towards settlement." 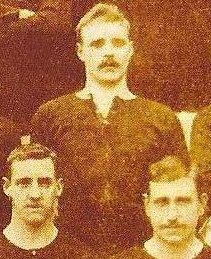 As an impartial observer put it: "Raisbeck was Raisbeck" vs Nottingham Forest,
which indicates no one was surprised anymore by the brilliant displays
of Liverpool's first superstar at the heart of the Anfielders' defence.
Two other Liverpool legends are beneath Raisbeck on the picture:
Arthur Goddard and Sam Raybould.

Liverpool's last game of the season was against relegation doomed WBA. Liverpool had to get a draw to be sure of League success as Sunderland were equal on points with superior goal average, but had already played all their games. Liverpool scored the deciding goal in the first half. From The Daily Express: "Robertson only just missed scoring for Liverpool and at the other end Garfield was charged off the ball just when about to shoot at an almost open goal. At last, however, Liverpool got away and Walker scored."

A fife and drum band playing "the conquering hero" welcomed the Liverpool team on its return from The Hawthorns. The plan was to lift secretary Tom Watson shoulder high in celebration, but as Liverpool Echo put it: "no arms were long enough to grip his girth." "AFTER NEARLY A DECADE of ups and downs between the divisions, Liverpool have finally won the league title. Their 1-0 victory over relegated-doomed West Bromwich at the Hawthorns was enough to put them two points clear of Sunderland and clinch the Championship.

Liverpool made a bright start to the season, winning their first three games. But in - and - out form left them well adrift of Sunderland, and when they suffered their third defeat in four games, at Bolton in mid - February, there was no thought of the Championship.

Then came the turning point. They went to Roker Park and beat Sunderland 1-0, the start of a 12 - match unbeaten run that took them through the field to the title.

Even so, it was a close run thing. Sunderland finished their programme with a 2-0 victory at Newcastle, to take them two points clear. Liverpool beat Nottingham Forest 2-0 to draw level, but with a far inferior goal average. They needed just a draw in their last game, and West Bromwich bravely held them scoreless until Liverpool got a late goal to settle the issue.

With only 59 goals, Liverpool have nevertheless broken the First Division scoring dominance of Aston Villa, who finished well down the table with 45. But their real strength has been in defence, with Scottish international centre-half Alec Raisbeck outstanding in the middle."

Liverpool most frequently lined up like this in the 34 league games in the 1900-1901 season - number of appearances in brackets: 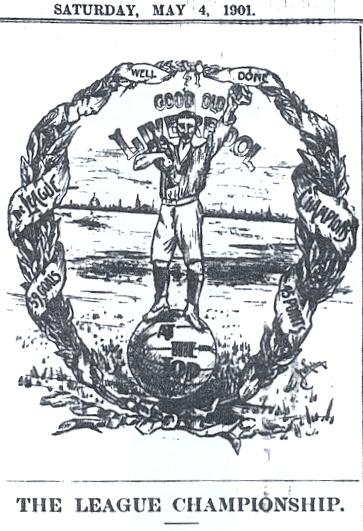 Illustration showing Raisbeck with the league trophy with the text: 59 goals, 45 points. The League champions - Well done - Good old Liverpool - At the top.

"The League tournament has finished for another season, and Liverpool enthusiasts are proud that the Anfield road contingent have honoured the city by bringing the League trophy to the banks of the Mersey. Liverpool have fully made up for a moderate season, and from a poor tenth (their position last year) they have now to be hailed as League champions for 1900-1."

Copyright - Arnie at LFChistory.net ([email protected]) - researched from reports in the Liverpool Echo and Liverpool Mercury

NEXT: The last chapter in LFChistory's series on the early history of Liverpool focuses on the club's surprising downfall after winning the title in 1901 and the rise of the club challenging a second League Championship in the 1905-6 season.