"Dod" Allan, who was described as "a model centre; of fine physique, great speed and no fear," was Liverpool's first great goalscorer in the Football League and the first Liverpool player to be capped for Scotland on 3 April 1897. Allan's transfer to Liverpool was made under controversial circumstances as he had signed a contract with St Bernard's in Edinburgh as well. He was reported to the Scottish Football Association and on 14 October 1895 he was suspended till 30 November after which he was considered a bona fide Liverpool player. 5 ft. 10 ins. and 13 st. 6 lbs. (173 cm. and 86 kg.) Allan burst onto the scene in the 1895/96 season with a staggering 25 goals from only 20 league matches as the club won the Second Division and would have no doubt netted more if not for his eight-game suspension. He was Liverpool's top-scorer the following season with 17 goals from 34 games as Liverpool finished fifth in the First Division.

Allan moved to Celtic in May 1897 where he helped the club to its fourth championship by scoring 15 goals in 17 league games. Liverpool still held his registration, but paid quite happily £50 to get him back before the 1898/99 season in which Liverpool finished second in First Division with Allan scoring 11 goals in 36 games. Allan had played seven games in his second spell at Liverpool when he was involved in a colorful incident with Sheffield United’s goalkeeper, William "Fatty" Foulke, which gained legendary status. Foulke was over 20 st. (125 kg.) and very difficult to say the least to charge him off the ball or into the goal as was allowed to do to goalkeepers in those days. 'I don't mind what they call me as long as they don't call me late for my lunch', he once said. Foulke once took to swinging on the crossbar in mid-game which resulted in him breaking it in two and on another occasion charged around butt-naked after a match searching for the referee to protest a controversial equaliser. The scene is set for 29 October 1898 when Liverpool and then League champions Sheffield United were playing at Anfield. Unlike his contemporaries Allan was not afraid of "Fatty" and it was reported that "Allan charged Foulke in the goalmouth, and the big man, losing his temper, seized him by the leg and turned him upside down." The referee wasn't too keen on Foulke's reaction and awarded Liverpool a penalty, from which Andy McCowie scored. Liverpool won the game 2-1, with none other than Allan scoring the other goal for Liverpool.

Prior to the 1899/00 season it was reported that Allan was too ill for training and he remained in Scotland. In September 1899 manager Tom Watson admitted full of sorrow: “Diseased lungs are not cured in a day. Allan’s absence is now beginning to be felt, and we are able to estimate him at his worth. Poor old George!” It had become apparent that Allan could not play top class football again, but his death from tubercolosis on 17 October 1899 at his mother's home in Fife was still unexpected and described as a 'thunderclap' for Liverpool fans."

Owen Collins looks at the players who have gained international recognition without necessarily making the grade at the club but particularly one name on this list is a great surprise given his success.

After winning the Lancashire league Liverpool's climb up the league ladder started in 2nd division. A real fairytale season was ahead and the club's biggest game to date against the most famous club in England in the FA Cup.

George Allan – As a rule he was a scrupulous player

"A model centre; of fine physique, great speed and no fear".

George Allan was so described by a journalist. He scored 56 goals in 96 games between 1895-1899. Allan died of tuberculosis only 24 years old.

In Liverpool they have one of the best centre forwards in the country. I may be mistaken, but I fancy Allan has to thank the tuition of James Ross for his advancement, for when I first saw him he was energetic, but decidedly clumsy. He is strongly built, and can stand the charge of the heaviest back with equanimity, whilst he passes most judiciously. Our Scottish friends might do worse than keep their selection optics on this young man.

Mr. J.J. Bentley liked the look of the Scotsman George Allan evident by what he wrote in the Edinburgh Evening News in January 1897: 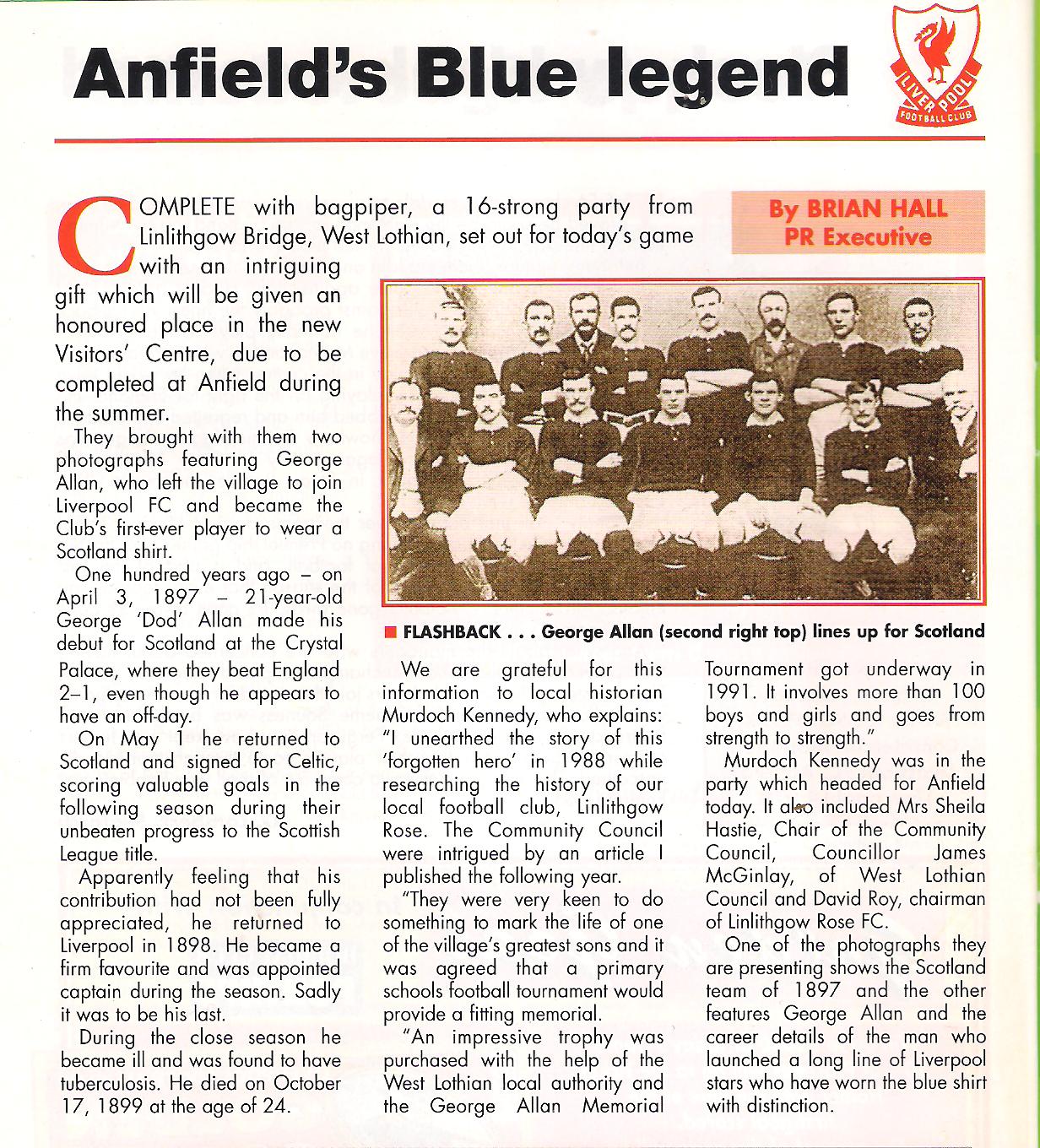 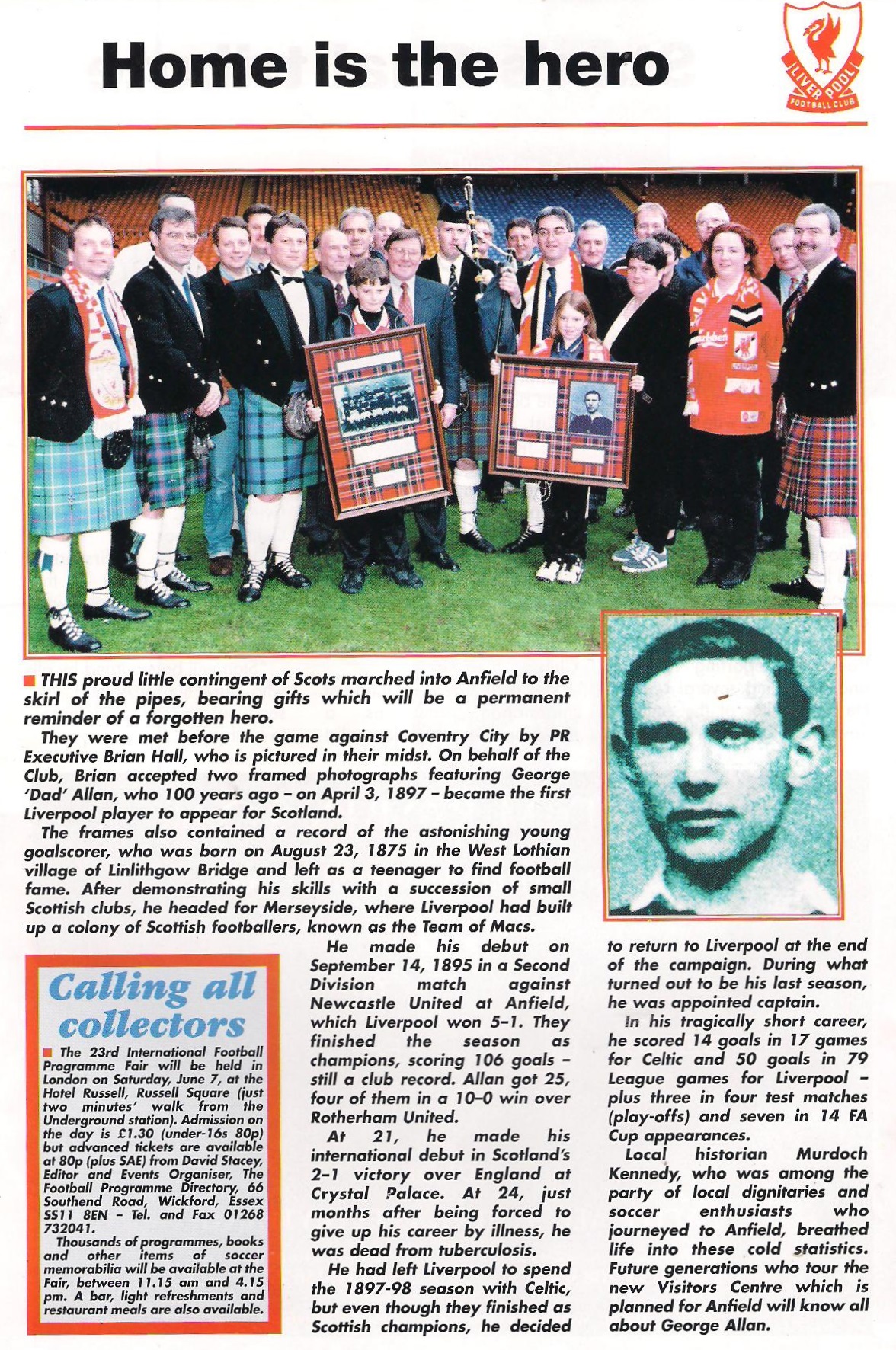 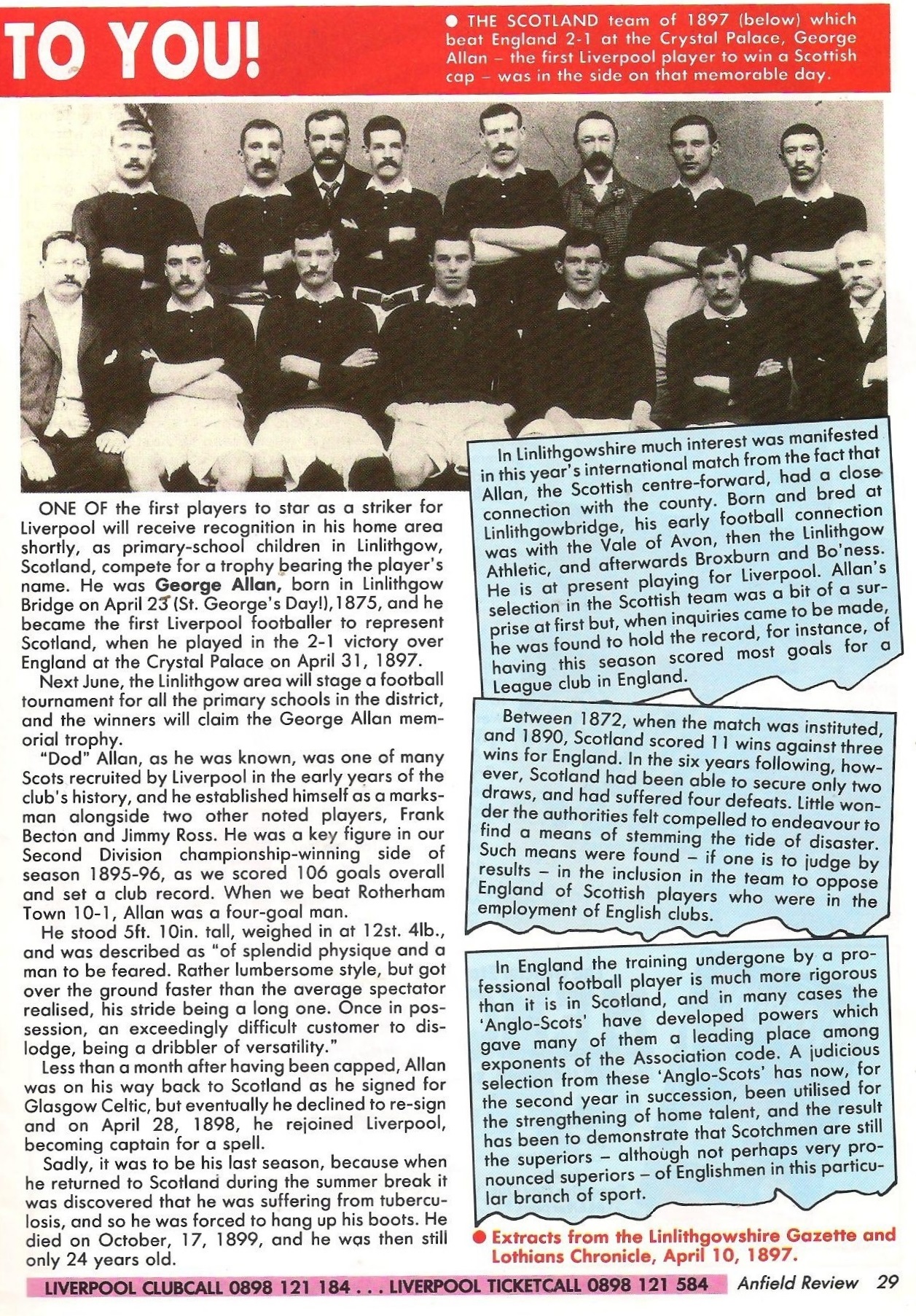