Forward George Allan signed for Liverpool from Scotland's Leith Athletic at 20-years-old in September 1895. He became an instant hero for the Liverpool faithful as his 25 league goals in 20 games was a major factor in Liverpool getting out of the 2nd division in the 1895-1896 season at the first time of asking after being relegated the year before. George Allan was so described by a journalist: "A model centre; of fine physique, great speed and no fear".

There's a sad end to the story of one of Liverpool's first star forwards as Allan died of tuberculosis only 24 years old.

Liverpool Mercury reported his death on 17th of October 1899: "George Allan, Liverpool's centre forward, died at Elie, Fifeshire, yesterday morning. Allan was discovered and developed by Liverpool Football Club, and played for Scotland vs. England two years ago. He afterwards joined the Celtic for a season, but returned to Liverpool a year ago. He was the pivot in the team which took Liverpool into the semi-final stage of the Association Cup ties and ran up for the League championship. During the summer he was taken seriously ill, and although it was hoped a few weeks ago that he would recover, he has at length succumbed. Allan was a model centre forward, and Liverpool have suffered severly in losing him."

Allan left Liverpool for Celtic in April 1897 where he won the championship, but a year later he returned to Liverpool. Allan had played 7 games in his second spell at Liverpool when he was involved in a colorful incident with Sheffield United’s goalkeeper, William "Fatty" Foulke which gained legendary status. Foulke was over 20 stone (125 kilos) and very difficult to say the least to charge him off the ball or into the goal as was allowed to do to goalkeepers in those days. Along with "Fatty" he also earned the nickname "Colossus": "I don't mind what they call me as long as they don't call me late for my lunch", he said. Foulke was involved in a lot of controversial incidents in his career. He once took to swinging on the crossbar in mid game which resulted in him breaking it in two and once charged around butt-naked after a match searching for the referee to protest a controversial equalizer. Foulke is a Sheffield United legend and won one league championship and two FA Cups in his 352 games for the Blades. His heavy drinking contributed to "his ponderous girth" and eventually lead to him dying of liver disease only at 42-years old.

Foulke was a giant among men!

Having introduced the two protagonists: the burly Allan against grizzly Foulke, the scene is set for 29th of October 1898. Liverpool and then League champions Sheffield United were playing at Anfield. Unlike his contemporaries Allan was not afraid of the Sheffield United goalkeeper and when Foulke seized the ball, Allan used all his might to rattle him. It was reported that "Allan charged Foulke in the goalmouth, and the big man, losing his temper, seized him by the leg and turned him upside down." The referee wasn't too keen on Foulke's reaction and awarded Liverpool a penalty, from which Andrew McCowie scored. Liverpool won the game 2-1, with none other than Allan scoring the other goal for Liverpool.

After he retired from football William Foulke gave a different version of this legendary incident when he was interviewed by the London Evening News: "You may have heard that there was a very great rivalry between the old Liverpool centre forward Allan and myself, that prior to one match we breathed fire and slaughter at each other, that at last he made a rush at me as I was saving a shot, and that I dropped the ball, caught him by the middle, turned him clean over in a twinkling, and stood him on his head, giving him such a shock that he never played again. 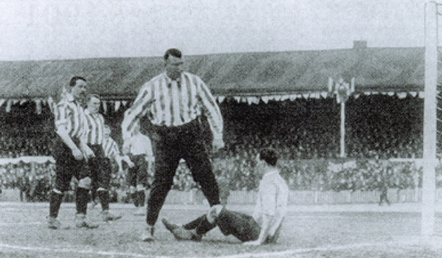 Well, the story is one which might be described as a "bit of each". In reality, Allan and I were quite good friends off the field... What actually happened on the occasion referred to was that Allan (a big strong chap, mind you) once bore down on me with all his weight when I was saving. I bent forward to protect myself, and Allan, striking my shoulder, flew right over me and fell heavily. He had a shaking up, I admit, but quite the worst thing about the whole business was that the referee gave a penalty against us and it cost Sheffield United the match."