Few came tougher than Donald McKinlay who was Liverpool's captain from 1922-1928. He certainly enjoyed his two decades at the Reds: "If I had 20 years to go again, I would go back to them," he said in 1955. McKinlay made his debut for Liverpool 19 years of age on 20 April 1910 when Liverpool defeated Nottingham Forest 7-3 with Jack Parkinson grabbing four. He only made two appearances as left-half the following season and featured on the right and left of the half-back line at the close of 1911/12. McKinlay was slowly making a name for himself but the question was what was his best position. He played in five different positions in the 1912/13 season mostly as an inside-right where he was said to be "as nippy and quick as a jack-in-the-box." He had quite a magnificent shot in his arsenal and he scored six goals in 23 matches that campaign. He was moved back and forth as well in the following season and after only featuring in two out of the last 11 games he was given the enormous responsibility of playing as left-half in place of injured captain Harry Lowe in the 1914 FA Cup final which Liverpool lost 1-0 to Burnley. McKinlay appeared regularly for Liverpool during World War I and made 136 appearances and scored 24 goals. Once the League resumed in 1919/20, McKinlay was a firm fixture in the side and formed probably the best full-back pairing ever in the history of Liverpool with him on the left and Ephraim Longworth on the right. After sharing the captaincy with Longworth in the 1919/20 season he was made sole captain in January 1922 at thirty years of age and held on to this honour until he left Liverpool seven years later.

McKinlay was the proud general of the Liverpool side that won successive League Championship titles in 1922 and 1923 and had the leadership qualities necessary for such a demanding role. McKinlay's shooting prowess gave him a return of 34 goals for Liverpool, of which only four came from the penalty spot. One goal possibly more memorable than the rest came on 16 January 1926 in the fifteenth minute of a 2-1 league win against West Ham. McKinlay was a full ten yards inside his own half when he unleashed a shot that hit the back of the Hammers' net. In honour of his 19 years of service for the club, McKinlay received his fourth benefit from Liverpool in the last game of the 1928/29 season against Manchester City at Anfield. He received a cheque for a total of £468. McKinlay stayed in the Merseyside area to play non-league football for a while with Prescot Cables and later became a publican in the city of Liverpool. Amongst the premises he ran was the Greyhound on East Prescot Road, where he was listed in the government compiled of 1939. He was a keen golfer and enjoyed playing the drums! McKinlay died aged 69 at Broadgreen Hospital in 1959. Not surprisingly Donald McKinlay is a member of Liverpool FC's Hall of Fame.

Scottish keeper, Kenny Campbell, told his life story in the Weekly News. Chapter one was published on 7 May 1921.

Donald McKinlay - The captain speaks out

Few came tougher than Scottish full-back Donald McKinlay who was a player at Anfield from 1909-1929 and Liverpool's captain from 1921-1928.

"I thought a lot of him. If Jack had had a little more 'devilment' in him, he would have been one of the best inside forwards in the game."

"One of the finest centre-halves I have ever seen. I would have loved to have played behind him. What a tragedy it was he was moved about such a lot. Why Liverpool let him go this season I just don’t know."

He hits the ball with ferocious force, and commands the ball as though it were tied to his boot.

The Liverpool Echo on Donald Mackinlay on 23 September 1918

"I think the game was tougher in my day. I remember one match in the early twenties when Wadsworth injured a leg and I saw blood coming out of his boot. I told him to get some attention to it and his reply was: “Who’s blood is it, yours or mine?’ and went on playing."

"He appeared in half a dozen different positions but the thing I remember most was his skill with a free kick. If I was leaving with a message and Liverpool had been awarded a free kick, I would wait until it had been taken because I knew anything could happen. He hit the ball with terrific power but also had a remarkable touch."

"Generally today captains do not have sufficient responsibility. It seems to me that all they do is to take the team out and toss the coin. There’s not enough directing and you hardly hear them shout instructions. In my day I had full control on the field and if there was any decision on changing of positions, I took it. I am speaking generally and not individually, but captains today are not what they used to be. I told my players: “If I have to say anything to you, answer me back and don’t start sulking.”’

“Red is my colour. I’ll play for Liverpool as long as they will have me. I don’t want to play for anybody else and when I pull off the red shirt for the last time I expect I will finish with football, at any rate as a player.” 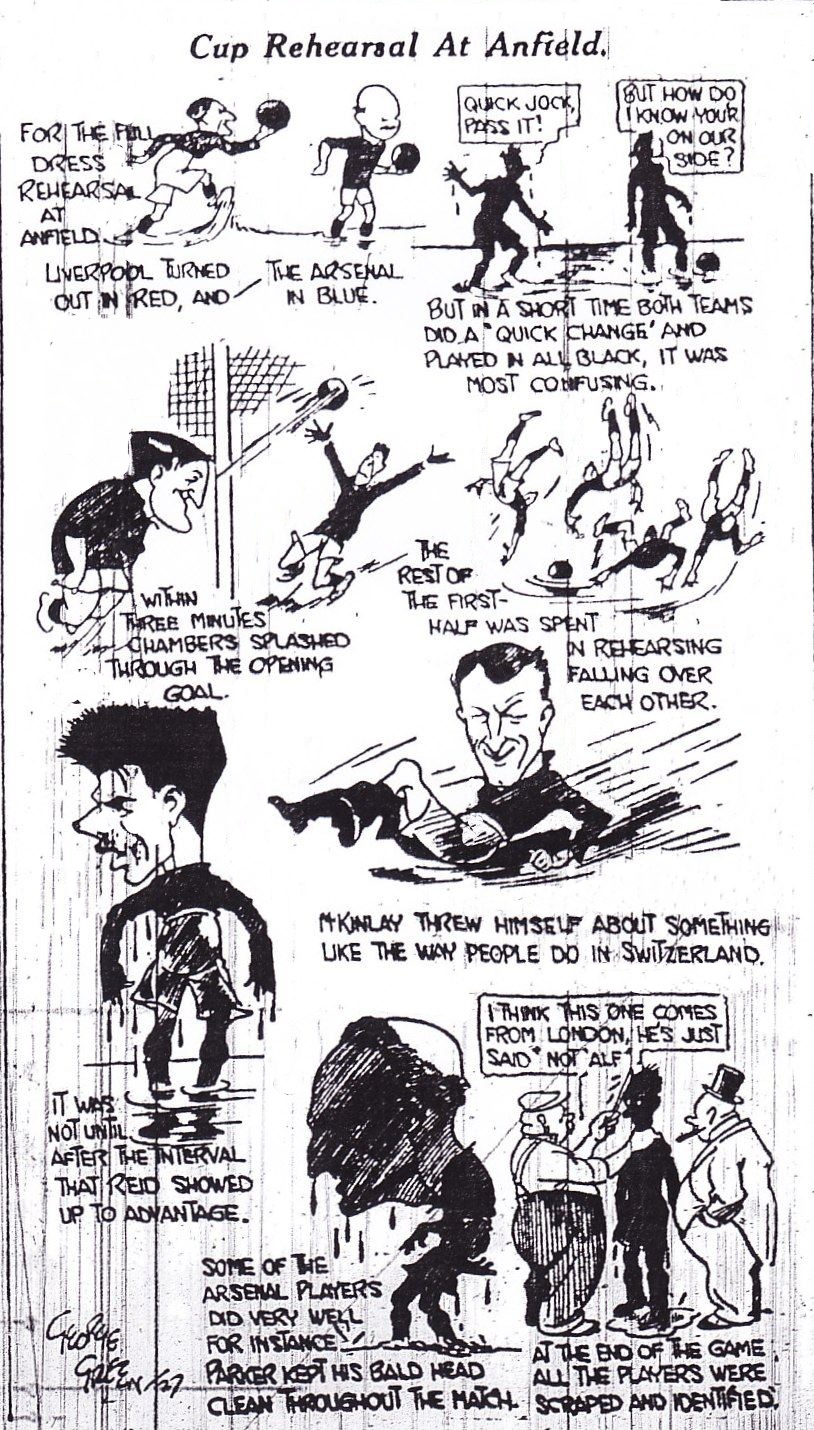 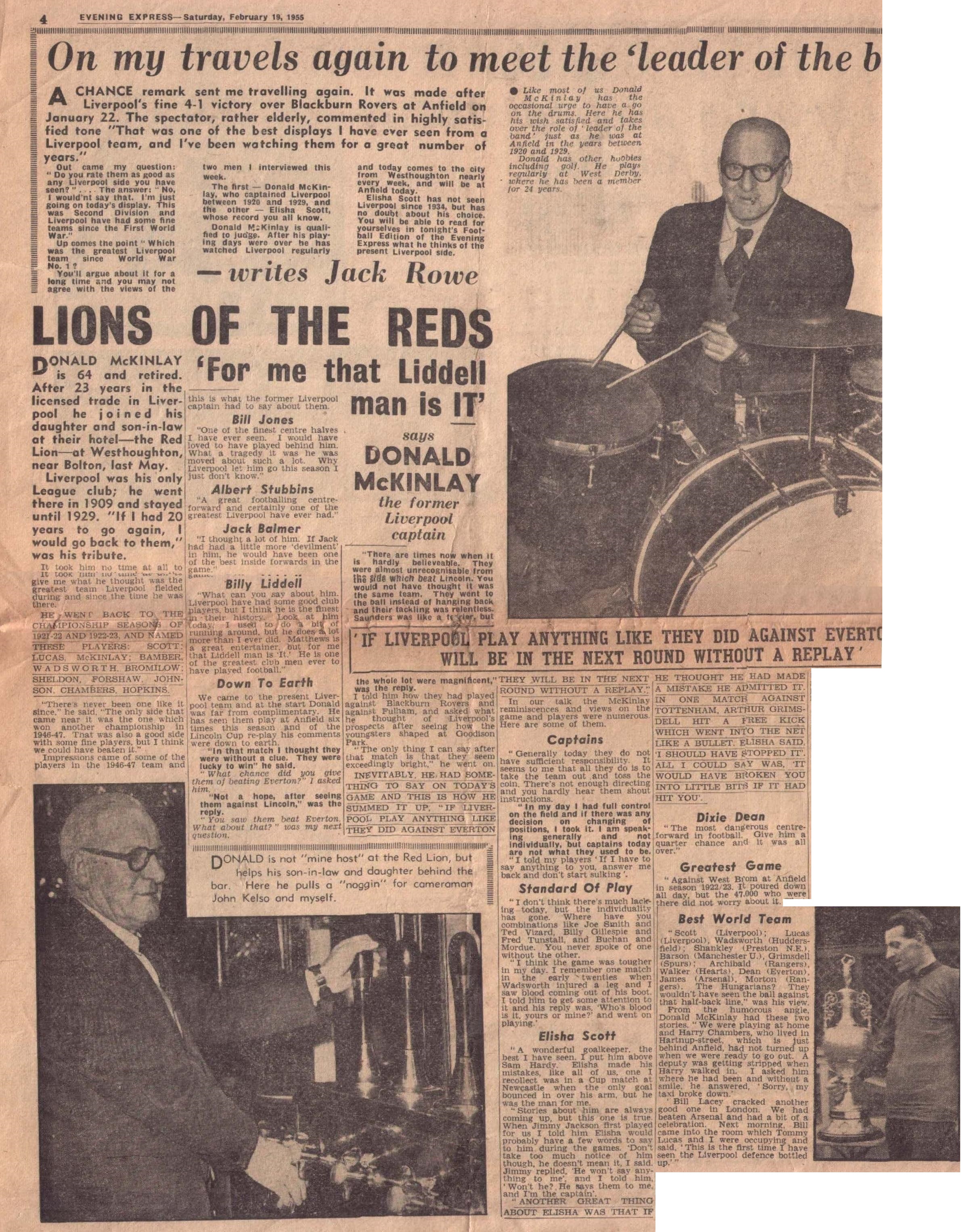 Donald MacKinlay interviewed in the Evening Express on 19 February 1955 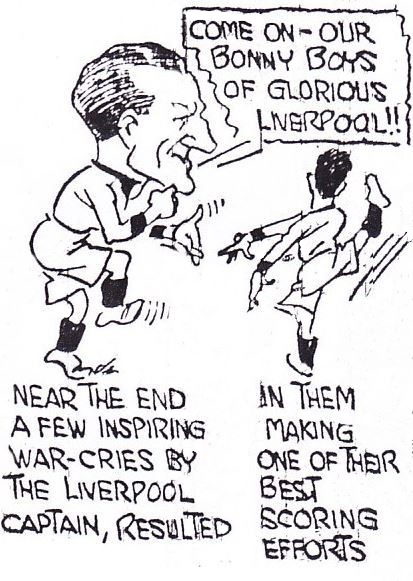 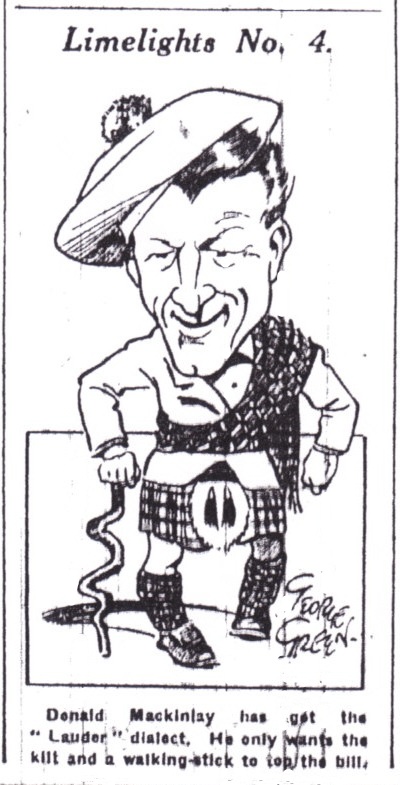 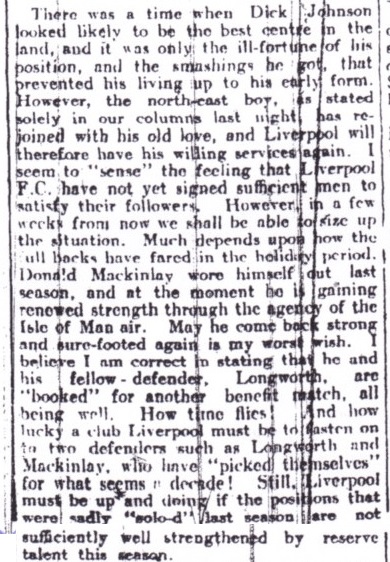 Mackinlay praised in the Echo in the 1924/25 season

Mackinlay's scoring prowess - from the Liverpool Echo on 26 December 1922 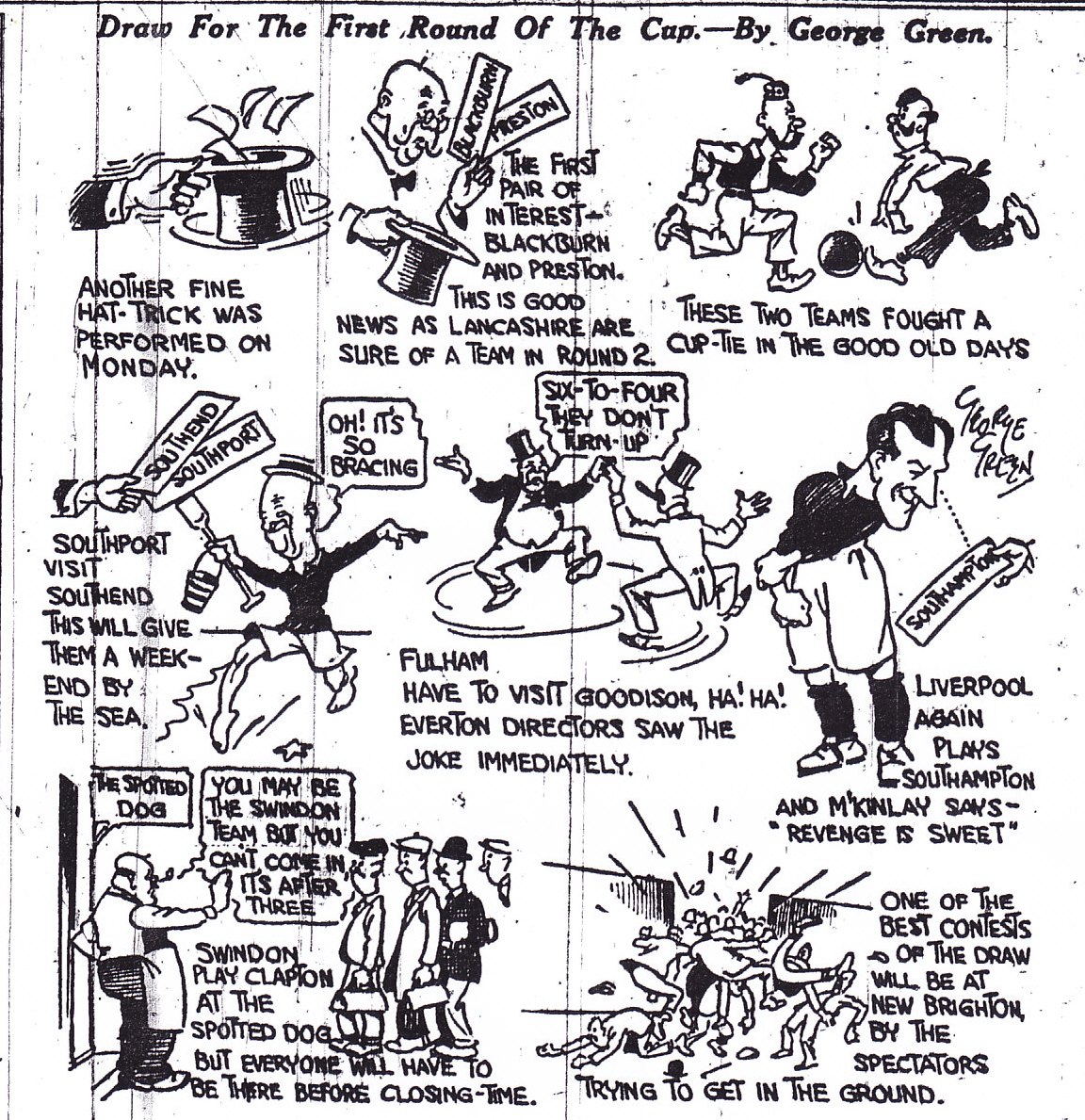 Revenge is sweet! - Liverpool draw Southampton in the cup 1926 (sketch)