Bromilow who had just left the Army, asked Liverpool for a trial at the end of the World War I, a lucky catch if there ever was one as then Secretary George Patterson recalled, "I should think that it is one of the luckiest signings I have made." The club programme from 18 February 1920 noted that Bromilow had "not yet figured on the losing side with the Reds. In all he has taken part in fourteen engagements, including two cup ties which have resulted in ten victories and four drawn games, with a goal record in his side's favour of 23 and only five against. Bromilow's advent and McKinlay's retirement to full-back has proved a most judicious move in the re-arrangement of the club's resources." The team lost eventually with Bromilow playing two games later but had greatly improved finishing fourth after being as low as eighteenth in December.

Bromilow played in a total of 28 games during his debut season and would miss only five matches over the next three seasons, which included the club's third and fourth League Championships in successive seasons, 1921/22 and 1922/23. Bromilow played usually at left-half and formed a powerful half-back trio with Jock McNab and Walter Wadsworth. Bromilow was said to be "more dainty and artistic than either of his two colleagues, but is eminently efficient none the less." Bromilow made his final appearance for the club at Blackburn on the last day of the 1929/30 season after an immensely successful career at the Reds. He was fondly remembered by Liverpool fans and a poll among them in 1939 revealed he came fifth when they were asked to name the best-ever Liverpool player.

Bromilow started his coaching career in the summer of 1930 in Amsterdam, Holland, which was an unusual place to start. In October 1932 he was appointed manager of Burnley who had been relegated to the Second Division two years earlier. The highlight of his time there being when the Clarets reached the semi-finals of the FA Cup in the 1933/34 season. Bromilow left in July 1936 for third division south's Crystal Palace after a series of mid-table finishes in the second tier of League football. Liverpool was never far from his thoughts and when the role of manager at Liverpool became vacant he applied with 51 others but George Kay was appointed in August 1936. Bromilow left the Eagles after only one season taking charge of Newport County in 1936/37, then returning to Palace, finishing runners-up in Third Division South before the outbreak of World War II. He managed Leicester City during the war, winning the League South title and Midland Cup. He returned to Newport for a couple of years, before joining Leicester again, this time as scout. Bromilow died suddenly on a train in Nuneaton on 4 March 1959 while scouting a cup game between Wrexham and Merthyr Tydfil for Leicester.

Dating from circa 1920, this advert for Phosferine features a quote from Tom Bromilow.

"He was a seriously cultured player and a great signing because we signed him for nothing after he literally just knocked on the door one day. I just love his story!"

"His signature was obtained in the strangest manner. He came to the ground in uniform during the war and asked for a game. I asked George Fleming, who was in charge of the second team then, how he was fixed and he said he could do with another player, Bromilow played at outside right and was an instant success. When the war ended he signed as a professional. Eventually he took his place in the first team when Lacey was playing an international match for Ireland. I should think that it is one of the luckiest signings I have made."

"Quite a good impression was created by the local lad Bromilow at right half-back; it was asking a great deal of him to place him against such a clever pair as Lindsay and Mosscrop, but he came out of the ordeal with distinct credit."

Tom Bromilow made his debut on 25 October 1919 at Burnley's Turf Moor. Liverpool won 2-1. From the club programme's report. 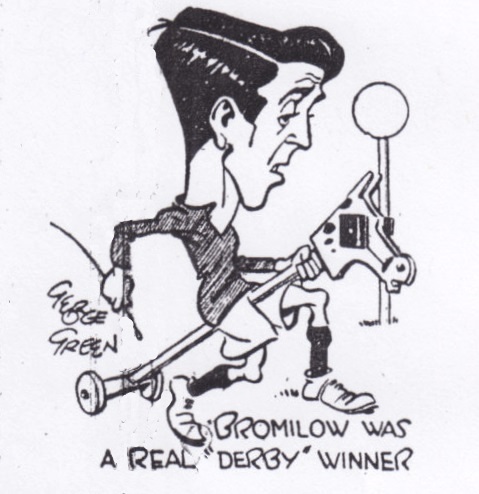