Lowe's display with Gainsborough Trinity against Liverpool in the first round of the FA Cup in January 1911 impressed the Reds. Lowe had built a sound reputation at the second division club and was considered one of the best half-backs in the Football League. The Liverpool Echo reported in May 1911 that "a sound judge connected with a South Lancashire club believes that Liverpool have completed an important transfer."
Tough-tackling and highly consistent half-back Lowe played 29 times in the First Division during the disappointing 1911/12 season when the club narrowly avoided relegation to the Second Division, finishing just one point ahead of Preston North End, who went down with Bury. Lowe was Liverpool's captain from 1913-1915 and was even referred to as "Captain Courageous" as he set "a rare example in his men. A man of few words, but great deeds." Having featured both at left and right-half he moved into the centre of defence, playing as "pivot" as it was called, in 1913/14. He was unfortunately injured in the penultimate League fixture and subsequently missed his club's first-ever appearance in an FA Cup final, in 1914. But he was fit again by the start of the next season and added another 28 appearances to his career total. Thirty-three-year-old Lowe returned to Anfield when the war was over, but faced a worthy contender for his spot. "W. Wadsworth's youth, not to mention his zeal and cover-the-ground abilities, could make it difficult even for a Lowe, with all his experience, to claim priority for centre half," the Echo noted. Lowe was only selected for five more games as Walter Wadsworth had taken his place in the team.

Even though Lowe didn't feature in the 1914 FA Cup final he was awarded a runner's-up medal following Liverpool's application to the Football Association. This was an exceptional decision by the FA. The medal is nine carat gold, about an inch in diameter and minted by J.W. Benson Ltd in Ludgate Hill, London. 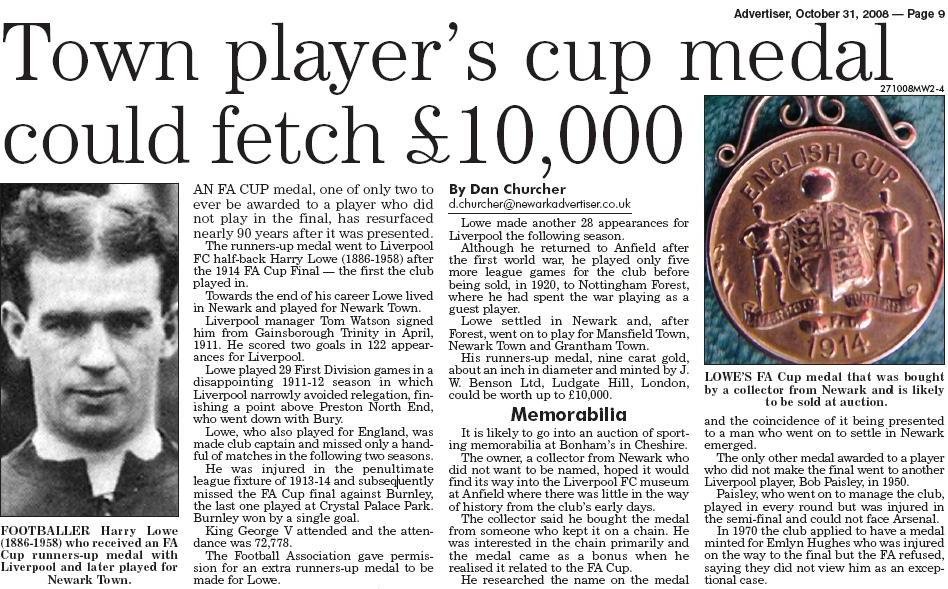 Lowe's medal worth a fortune