Scottish keeper, Kenny Campbell, told his life story in the Weekly News from May through July 1921. He made 142 apperances for Liverpool from 1912-1920. In the first chapter he had just left Scotland for Liverpool. In the last chapter Tom Fairfoul and Kenny Campbell were in trouble ahead of the FA Cup semi-final against Aston Villa in 1914.

The King
When We Lost The English Cup
By Kenneth Campbell
Kenneth Campbell, the famous goalkeeper for Partick Thistle and Scotland continues the story of his football career. Joining Liverpool when a lad as understudy to the renowned Sam Hardy, the prince of English goalkeepers, Kenneth ultimately succeeded in displacing Hardy, who went to Aston Villa. A year ago he was chosen to guard Scotia’s goal against England, and shortly afterwards he joined Partick Thistle, and this season he played against Wales and Ireland, and helped his club to win the Scottish Cup.

After beating the Villa we had great hopes of our chances in the final with Burnley. We realised we had a stiff struggle, but with such an element of Scots in our crowd in our native “dourness” we thought we would take a lot of beating.
But our hopes got a wee bit shattered by an unfortunate incident, and I do not hesitate to say that it had a deal to do with what happened to us at the Palace.

We played Middlesbrough in a League match the week previous to the final, and owing to our having a somewhat weak team out – Lacey, Sheldon, Longworth, and myself of the cup-tie team were not playing – we went down 4-0.

That in itself would have been a bit of a shock, but what really did tell was a regrettable accident to Harry Lowe, our centre-half, who had his knee injured in this game. Once more the uncertainties of football demonstrated.
Never shall I forget the anxiety of the following week. We went down to Chingford again for special training on the Monday after the Middlesbrough match.
Would Harry be fit? That was the question of the hour. You know how little things like that upset one, and we were strung up to the highest pitch.
Harry was sent to a specialist in London, and he gave great hopes of being able to play.

We trained hard and earnestly, and felt that, after all, things were not to be so bad.
Harry attended the specialist every day, and on the Saturday he went to have his knee strapped up.
He came back to Chingford about lunchtime, and we all went on to the green in front of the hotel to see him try his leg.
I remember it all so well. Little Jacky Sheldon threw the ball to Harry’s bad leg, and called – “Kick it back to me, Harry.”
Poor Harry made an attempt, and then drew back !!
“It’s no use, boys,” he said, and the tears were in his eyes. And I am not ashamed to say that most of the boys felt like that.

The tragedy of it! To be robbed of the services of our pivot on the eye of such an important event – one on which we had set our hearts so much – was a real tragedy to us.
After going through the rounds and reaching within touch of a footballer’s highest ambition, it was a severe blow, and I know it upset all the boys.
However, there was nothing for it but to put a stout heart to a “sley brae.”
Harry’s injury brought in Donald McKinlay at left half, Bob Ferguson was at centre half, and Tommy Fairfoul, right half – a Scottish half-back line playing in an English Cup final! As in the case of the semi-final, we went in taxis to the scene of the match. Four of our machines arrived at the Crystal Palace, but one, with four players, was missing.
What happened to it we did not know. At first we were inclined to chaff. “Somebody has kidnapped them,” said one of our boys, and we all laughed. What a sensation for the papers!!
“Kidnapped on the way to the final!” and so on.

But as the time wore on our banter ceased. Our officials were terribly anxious. Old Tom was going about, and I believe the old chap didn’t know really where he was. I forget exactly who were in the missing taxi, but I know that Tommy Fairfoul and Sheldon were two of them.
What made the situation all the more serious was that we were to be all ready stripped to cheer the King at 3.20, ten minutes before the time for kicking off.
At three o’clock Mr Watson got desperate and made another visit to the entrance gates. With a struggle he got outside and – found his four missing players doing their best to get in.
They had been trying to get past the commissionaire for quite a long time, but that official was adamant. He told them that all the players had gone in a long time ago, and he had heard the same tale before – “players.” No, no, he wasn’t having any. They’d better pay up and look pleasant, and hurry up else they’d miss a sight of the King.

All this, of course, exasperated our friend Tommy and his comrades, and they were just debating between themselves as to which of them was to commit a murder, when Tom Watson hove in sight. They got in all right after Tom had said a few “kind words” to the commissionaire, but he had to get the assistance of Mr F. J. Wall, the English Association secretary. 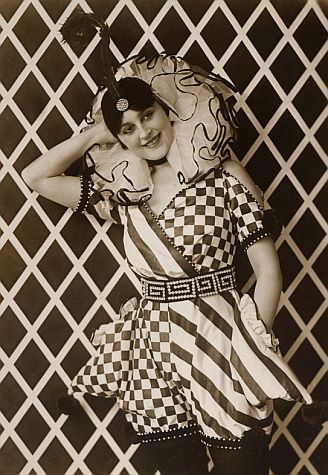 What Norah’s Wire Said
Of course, we had the usual number of wires wishing us success. One of these, I remember, was from Miss Norah Delaney, who, I’m sure is known to most of you as “The Girl in the Uniform” on the halls.
Miss Delaney was the principal boy in the Liverpool pantomime during the winter season and had sent us a wire every round. Our boys appreciated her wires, I can tell you, and her latest wire – “Last hurdle, bring it home, boys” – was received with a cheer. We all knew that she really meant us to bring “it” home.

An English Cup final is a much more inspiring sight than the Scottish event. Of course, the presence of His Majesty at these games adds a lot of colour. For instance, there is a railed-off crimson enclosure, with specially upholstered seats, in the centre of the stand, and most of the “nobs” make it a point of being present on that occasion!

Luckily for us, His Majesty was late in arriving – it was about 3.25 – so we were all ready and stood in front of the stand and cheered his arrival.

Before the game started the two rival captains were presented to the King – Tommy Boyle of Burnley, and Bob Ferguson of our side. I remember how big Bob blushed up like a schoolboy when undergoing the ordeal. And no wonder. To be publicly presented to the highest gentleman in the land to the frantic cheering of a multitude of 90,000 spectators is no everyday task.

Well, here we were at last lined up for the tussle. Burnley’s side was: - Sewell; Barnford and Taylor: Halley, Boyle and Watson: Nesbitt, Lindley, Freeman, Hodgson, and Mosscrop.
Our team: - Myself: Longworth and Pursell; Fairfoul, Ferguson, and McKinlay: Sheldon, Metcalfe, Miller, Lacey, and Nicholl, the same lot you will observe that beat Villa, except that McKinlay came in for Lowe.

I do not intend to describe the play, but when I tell you that during all the first half I never got a shot to hold, while Sewell was a very busy man; that Nicholl sent in a shot which was going all the way into the net, when Taylor popped up, and the ball hit him on the head with such force that he was knocked out for a time, and that Fairfoul hit the crossbar, with the goalkeeper well beaten, you will tumble to the fact that luck was certainly not with us. 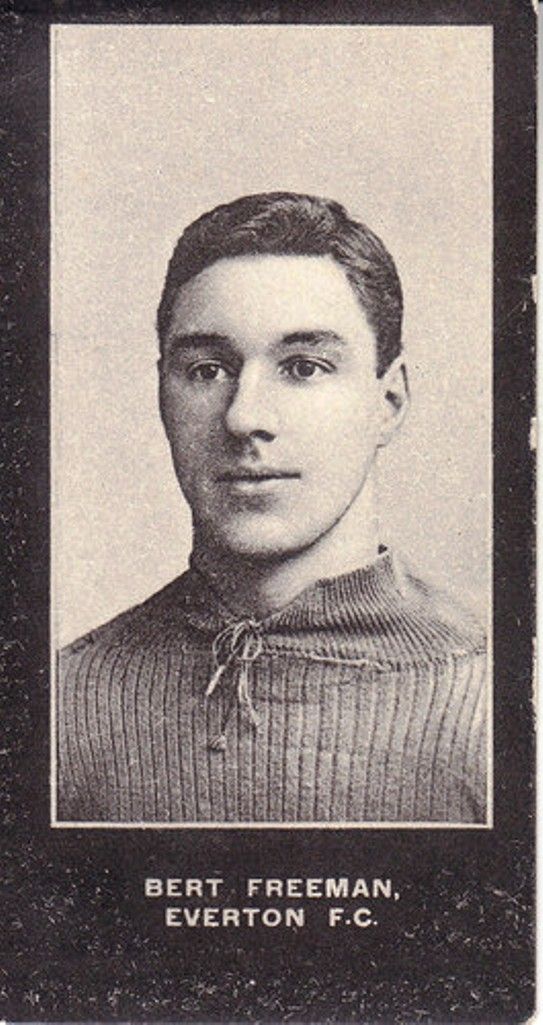 We had been playing against a slight breeze, and with a no-score interval could you blame us for thinking at lemon-time that our chances of winning the cup were certainly still rosy?
But once more uncertainties of football: Well on in the second half a ball came across from the Burnley left winger, which Freeman met and sent like lightning into the net behind me.
It was really a remarkable goal. I have never seen it equalled. The ball was almost breast high, and how Freeman got his foot on it and the force behind it I know not.
It was one of these shots which might have gone anywhere. I certainly never saw it pass me, and I am sure a like goal will never be scored again – except by chance.
Anyhow, it was good enough to beat us, for no further scoring took place, and Burnley carried home the Cup instead of us.

In football I grudge no team their victory, but I have to confess I spent the rottenest time of my life during the subsequent proceedings.
During the presentation of the Cup and the winners’ medals the teams stand alongside the platform where the King makes the presentations.
We were a melancholy lot as we stood by while Burnley received their coveted honour, and it was small consolation that we, too, ascended the platform to receive the runners-up medals.
But our boys took the defeat like sportsmen. By Saturday night we had got over it, and on Sunday evening we had a glorious concert in the hotel.