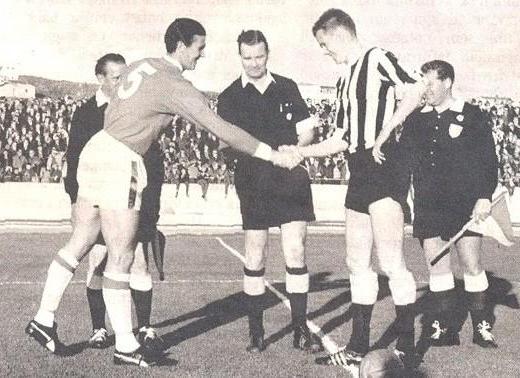 Captains Ron Yeats and Ellert B Scram shake hands at the beginning of Liverpool's first European game in Reykjavik.

The European Champions' cup was the forerunner of today's Champions' League but there the similarity ends. The same trophy (replacing a smaller one in the early 1960's) which has been presented to the winners for nearly 40 years is still in place today but for over 35 years the premier European club competition was only for the champions of each country. Real Madrid's early domination (they won the first five tournaments from 1956 until 1960) saw the entry rise from 16 clubs in 1955-56 to 27 in 1959-60.

Against the advice of the Football authorities in England, Manchester United & Wolverhampton Wanderers competed in the early years but by the time Liverpool qualified by winning their 6th First Division championship in 1964, the trophy had become widely-respected and much sought-after throughout the continent.

The club's baptism was gentle enough. They were paired with KR Reykjavik from Iceland in the preliminary round and won both legs comfortably by five goals. Given that the tie had already been won in the away game, a good crowd of just over thirty-two and a half thousand attended Anfield's first European night. But the crowd-figures increased as Liverpool progressed and better opposition were drawn in subsequent rounds - 44,000 against Anderlecht, 48,000 against Cologne and over 54,000 for the visit of the holders Inter-Milan in the semi-final.

The Belgian champions included several of the national side which had just held England to a draw at Wembley but goals from St. John, Hunt and Yeats provided a comfortable lead which was added to by Roger Hunt's last-minute winner in the return game in Brussels three weeks later.

Two goal-less draws with Cologne followed as winter turned into spring but in the days before away goals and penalty shoot-outs a third game was necessary in neutral Rotterdam, although the bulk of the 45,000 crowd had made the much easier journey from Germany. The Reds took a two-goal lead but Cologne hit back to equalise and then had a goal disallowed. With no provision for a 4th match, the tie was bizarrely settled by the toss of a coin. Skipper Ron Yeats called correctly but only after the first 'coin' had stuck in the mud and had to be tossed again! It was a cruel way to go out and a strange way to go through but those were the rules at that time.

The semi-final was one of Anfield's greatest-ever nights, coming as it did just three days after Liverpool had won the F.A. Cup for the first time in its long history. Gordon Milne (who missed the final through injury) and Gerry Byrne (injured in the final itself) were sent out to parade the famous trophy before the game and the players took to the field in a cauldron of noise. The Italians seemed unnerved despite their experience and being used to playing in front of hostile crowds. But this was different. They had probably never played in front of a crowd that was so close to the pitch and seemed unprepared for the emotion that greeted the F.A. cup winners.

Roger Hunt's brilliant early volley and a superbly-worked free-kick finished off by Ian Callaghan unnerved them even more but in between those two superb goals an error by Ron Yeats had seen Mazzola strike an equaliser past Tommy Lawrence into the Kop goal. Lawler had a goal disallowed before Ian St. John restored the home side's two-goal advantage a quarter of an hour from the end. But would it be enough?

Inter were experienced European campaigners and were not only defending the trophy they had won by beating Real Madrid in Lisbon the previous year but were also holders of the World Club championship, another trophy they would ultimately successfully defend in 1965. In an extremely hostile atmosphere, all the good work done at Anfield was cancelled out by two controversial refereeing decisions early on in the San Siro.

Having appeared to signal an indirect free-kick on the edge of Liverpool's penalty-area, a goal was allowed to stand despite fierce protests when the kick was curled straight in. Before Liverpool had time to recover from that blow, the aggregate lead had been wiped out. At a time when goalkeepers were usually protected and got most of the 50/50 decisions in their favour, Tommy Lawrence was bouncing the ball on the edge of his area ready for a clearance when it was kicked past him into the net. If you see footage of this game, there is no clear foul on Tommy but if goalkeepers were impeded from distributing the ball, a free-kick was usually given in their favour. Not this time though.

Liverpool tried to recover their composure but their first European campaign ended in bitter disappointment, though there was no dispute about Fachetti's brilliant third goal in the second-half which took the Italians through to the final again, which just happened to be played at their own stadium! 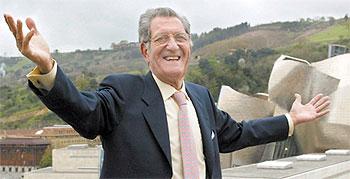 The Spaniard Jose María Ortiz de Mendebil, whose face Shankly said he will never forget, was a highly respected referee who refereed for many years after slaughtering Liverpool at San Siro.