For the first time in 16 long years since the shame and tragedy that was Heysel, Liverpool took their place in European football’s top club competition. The giant trophy was the same but the competition bore little resemblance to the European cup they had left behind in 1985. No longer only for domestic title-winners, the revamped Champions’ League was also somewhat controversially open to clubs that had filled the places behind the league winners.

Liverpool had to negotiate a qualifying round before they could take their place in the first group stage but the draw was kind and sent them to Finland to play Haka. Michael Owen scored a second-half hat-trick in a 5-0 victory in Helsinki that made the 2nd leg a formality and a modest crowd of under 32,000 watched a similarly comfortable 4-1 win a fortnight later. Later the same week Liverpool defeated Bayern Munich 3-2 in Monaco to take the European Super cup for the second time.

Boavista, Borussia Dortmund and Dynamo Kiev were to be Liverpool’s opponents in the group and the Portuguese provided the opposition at Anfield on the 11th of September 2001 in front of a subdued crowd of just over 30,000 only a few hours after one of the darkest incidents in history in New York. Silva gave the visitors the lead in their first attack but Michael Owen equalised before the interval and the game petered out into rather a tame 1-1 draw, apart from some annoying theatrics from some of the Boavista players that incensed the home fans. Under the old home-and-away system, a home draw would not have been seen as a good result but in a mini-group much can change as the competition progresses. Liverpool returned to the scene of their UEFA cup triumph in Dortmund and earned a valuable point from a scoreless draw and then beat Kiev home and away to put themselves in a strong position in the group. The win in Kiev was particularly memorable because not only did Liverpool become the first English club to win there, they also had to travel without their manager Gerard Houllier, who had been taken ill during the league match with Leeds United the previous weekend and was rushed to hospital requiring immediate heart-surgery. Another point was gained in Boavista before Dortmund came to Anfield for a match that would determine both clubs’ future in the competition. The Germans brought a large and noisy contingent of supporters to Merseyside with them who helped to create an atmosphere that was significantly better than the earlier games. The attendance was also several thousand higher than for the previous qualifying and group matches, no doubt swelled by the knowledge that this was effectively sudden death for one of the participants. With a quarter of an hour gone, Vladimir Smicer profited from Emile Heskey’s knock-down to drive the ball into the corner of the net and 9 minutes from time Stephen Wright thumped a header into the Kop goal from a free-kick on the right to seal a victory that guaranteed Liverpool’s progress into the next group stage. 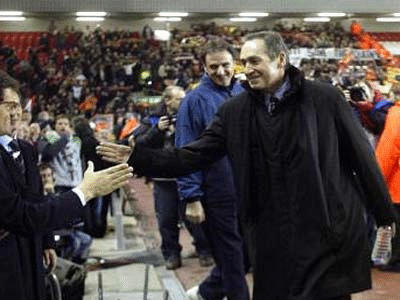 Further progress into the knock-out stage of the tournament was seriously threatened when Barcelona gave Liverpool a football lesson to win 3-1 at Anfield despite Michael Owen having given Liverpool a half-time lead. There followed four successive draws … with AS Roma in the Italian capital, home and away with Galatasary and another 0-0 with Barcelona in the Nou Camp where Liverpool’s negative tactics were greeted with derision by the Catalans as well as by some sections of the British press. Sometimes it is more important not to lose than it is to win but Emile Heskey’s equaliser in Istanbul was Liverpool’s only score in those four drawn games. Incredibly after failing to win in their first five matches of the second group stage, Liverpool could still qualify if they beat Roma on Merseyside and what was more they could top the group as well. But it was a big “if”. The Italians were still unhappy about the controversial way they had been dumped out of the UEFA cup the previous year and were able to field a very strong team that had ambitions of its own of making it through to the quarter-finals. On an extraordinarily emotional night that saw the return of Gerrard Houllier to the home dug-out, victory was assured by Jari Litmanen’s early penalty-kick and Emile Heskey’s second-half header.

Another close to capacity home crowd saw Liverpool edge out the Germans from Leverkusen thanks to a single goal from Sami Hyypia just before half-time. A potentially mouth-watering all-English semi-final with Manchester United awaited but in the Bay Arena a week later Liverpool’s dreams fell apart. Abel Xavier scored a vital away goal near the interval and when Litmanen scored a terrific individual goal 12 minutes from time to cut the Germans’ lead on the night to 3-2 but put Liverpool ahead on the ‘away goals’ rule progress into the last four seemed assured. But Leverkusen were to have the last word and it was them and not Liverpool who went through to the semi-final. It was a cruel way to go out after being so close but many people questioned the wisdom of replacing Hamann with Smicer with a third of the match still to play. It wasn’t to be the last decision made by the manager following his heart operation and period of convalescence that would be questioned by the supporters. But despite the disappointment, it had been a good campaign and perhaps the team had got further than many had expected because it was their first attempt at the Champions’ League where the format and tactical approach was quite different to that of the UEFA cup.