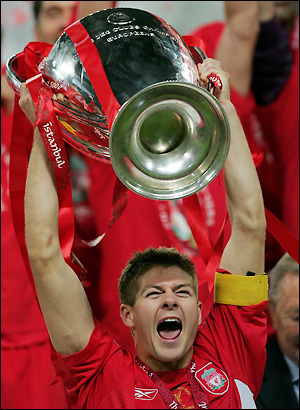 Spaniard Rafael Benitez was the man entrusted with Liverpool ’s future during the summer of 2004. The club’s 4th place finish meant they had to open what would turn out to be an extraordinary European campaign four days before the League season started. There was no hint on a warm evening in Austria of the drama to come eight and a half months later. Michael Owen was left on the bench as an unused substitute in Graz, thus allowing him to play for his new club Real Madrid in the Champions’ League. A man who was to make the move in the opposite direction a few months later was not so fortunate. Participating in Real’s opening European match meant that Fernando Morientes was cup-tied so far as Europe was concerned for the remainder of the season. Liverpool were easy winners in Graz thanks to two marvellous goals by Steven Gerrard, who was denied a hat-trick by an incorrect offside decision. But there was an uncomfortable evening at Anfield two weeks later when Graz scored a goal every bit as good as Gerrard’s opener in the first leg. Liverpool squeezed through to the group stage and that was all that mattered.

Monaco, the beaten finalists from 2004, were Liverpool ’s first opponents in the middle of September and a first-half goal from new arrival Cisse was followed by another from Baros a few minutes from time. But only one more goal … and an own goal at that … was scored in the next four group matches. Single goal defeats came in Greece and France against Olympiakos & Monaco respectively with the only bright spot being the victory in Spain against Deportivo thanks to Jorge Andrade’s intervention. Plenty of chances had been created against Deportivo at home but worryingly none were taken. This left Liverpool needing to beat Olympiakos by two clear goals in the final group match in much the same way they had needed to dispose of Roma in 2002 to ensure further progress in the competition.

The team’s chances were worsened when Rivaldo’s first-half free-kick found its way past the Liverpool wall and into Chris Kirkland’s goal. But the manager’s substitution of Florent Sinama-Pongolle for his countryman Djimi Traore proved to be a masterstroke. The young Frenchman tapped in Harry Kewell’s cross a couple of minutes after the re-start and the dream was alive again. It was not until the final 10 minutes however that Liverpool took the lead for the first time on the night when Neil Mellor reacted quickly to drive a rebound into the net. Mellor, like Pongolle, had only been on the pitch for a minute or two when he struck his vital goal. But Liverpool still needed to score again. As the volume was turned up off the pitch, it was left to captain Steven Gerrard to drive a ferocious shot into the Kop goal and bring scenes of celebration reminiscent of some of the club’s great European nights of the past.

The knock-out stage commenced after the winter break and it was Bayer Leverkusen who were paired with Liverpool in a repeat of the ill-fated 2002 quarter-final. Luis Garcia’s first European goal for the club was followed by wonderfully accurate direct free-kicks from Riise & Hamann. The German’s goal came in the last minute but there was still time for the visitors to grab what might have been a vital away goal in the last few seconds when Jerzy Dudek fumbled a shot. However, the 3-1 scoreline was repeated in the Bay Arena a fortnight later and there was to be no repeat of the heartbreak in the same stadium three years previously. Garcia added another two goals in an impressive display, the other coming from Milan Baros.

The quarter-final draw paired Liverpool with Juventus. It would be the first meeting between the clubs since the 1985 final. On an emotional night, Benitez sprang a surprise by including Anthony le Tallec from the start and the youngster gave an impressive performance before being replaced by Smicer some 15 minutes from the end. The team’s first-half performance was sensational. They pressed the Italians right from the start and were rewarded with stunning goals from Hyypia & Garcia before half an hour had been played. It was hardly surprising that they couldn’t keep up the same tempo after the break and an unfortunate mistake by young goalkeeper Scott Carson handed Juve a lifeline. But it shouldn’t be forgotten that Carson had made a wonderful save from del Piero in the opening period. 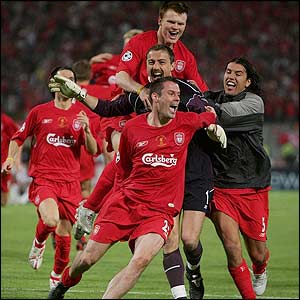 Dudek was back in goal 8 days later and a heroic defensive performance saw Liverpool through to the semi-final, where they already knew they would meet Premiership rivals Chelsea. Liverpool had already lost three times to the Londoners during the season but there was to be no repeat. A creditable goal-less draw was achieved at Stamford Bridge and only a wonderful save by Petr Cech denied Milan Baros, although Frank Lampard did miss a golden chance for the home team. When Chelsea came to Anfield, the atmosphere was simply phenomenal. The noise, colour and passion from the crowd can rarely if ever have been equalled during the club’s illustrious past. Luis Garcia’s early and controversial goal whipped the crowd into even more of a frenzy but there were very few clear-cut chances for either team on the night, apart from a heart-stopping moment 5 minutes into added-on time when Eidur Gudjohnsen somehow blasted the ball across the face of the goal when it seemed easier to score.

And so to the Ataturk stadium in Istanbul. Who could do justice to an extraordinary night in one paragraph when whole books will be written about the events that unfolded? Suffice to say that at half-time Liverpool were down and out but somehow recovered with a display of incredible courage and resilience to force the final into extra-time and then penalties. Almost at the point of no return, Rafael Benitez gambled by sending Dietman Hamann out for the second period and the German played a huge role in the team’s recovery. Although it is very unfair to single out any player, mention must be made of the growing influence Steven Gerrard had after the interval and it was his stunning header from Riise’s cross that started the fightback. Mention must also be made of Liverpool’s remarkable following in Turkey, where maybe as many as 40,000 supporters managed to get tickets, double the club’s official allocation. They played their part too as the European cup came to Anfield for the 5th time … and to remain in Liverpool 4 until the end of time.

Liverpool’s unexpected victory posed UEFA with a real dilemma. Their regulations stated that no country could have more than four clubs in each season’s Champions’ League and Liverpool had finished the domestic League season in 5th place. Trying to find a way to keep everybody happy, they decided to grant the holders entry into the 2005-2006 but they would have to defend their crown from the first qualifying round. This would destroy pre-season plans made a long time ago but at least Liverpool would have a chance to defend the trophy they had won so thrillingly. Less than 50 days after an unforgettable and scarcely believable climax in Istanbul, another European adventure would commence.