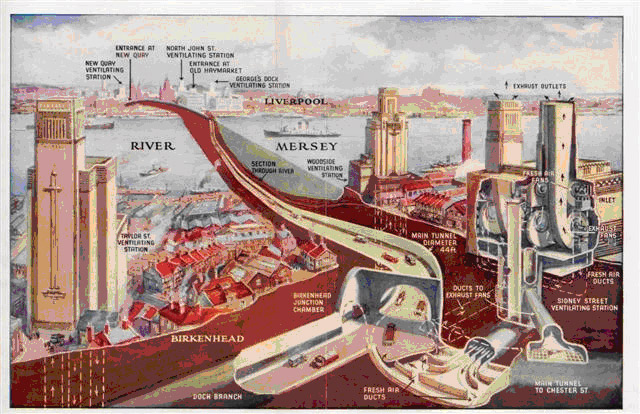 Saturday work on the Mersey Tunnel leads to first ever "Downing on tools"
"down tool's lads, the Reds kick off in an Hour" 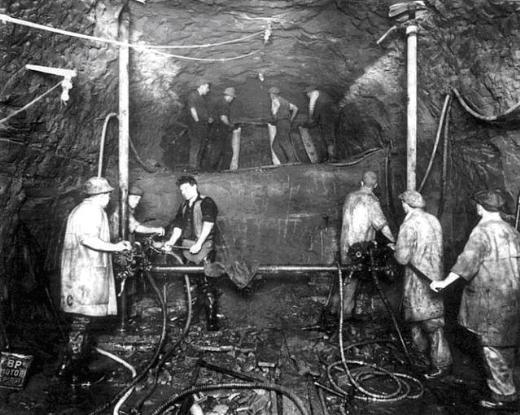 Welcome to Anfield on yet another glorious late summer day.
As usual, in games against Sheffield, the ground had started to fill early today and it was evident that many of the white rose brigade had crossed the Pennines.
All the local pubs were full to bursting when I arrived today.
The big debate being, would the defence of Sheffield be able to handle the new Liverpool forward line which now included Hodgson, Forshaw and Chambers ?
With Walsh and Hopkin supplying the crosses, many of the fans were talking of four or five goals becoming the benchmark at Anfield, for a good performance.
Forshaw had already started the season with five goals in four games.

Scene at the tunnel, five minutes before kick off.
can only assume the lad still toiling away was a blue 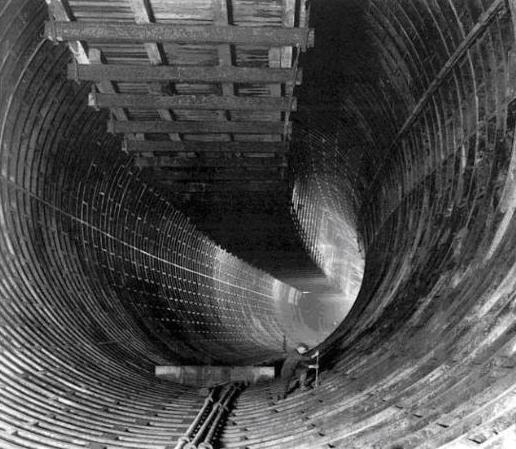 As the referee flipped the coin, groans circulated the ground as Liverpool lost the toss and had to kick towards the Kop in the first half.
The disadvantage being, Liverpool had to face a glaring sunshine in the first half. The first attack of the game was brought to an untimely end when Bromilow breaking forward, put through a pass that was just a shade to far forward for Hopkin to keep in play. Sheffield responded immediately with an attack of their own. And if it wasn’t for a well timed tackle by Longworth, the blades could have taken the lead.

Liverpool came again, and Alderson had to make a simple looking catch from the swerving ball put across by Walsh. His clearance showed Liverpool that the power of Gillespie may well cause many problems this afternoon, but Cockburn rose to the early challenge. Gillespie, the Irish international captain, was again involved minutes later when his wonderfully accurate pass to Tunstall lead to a superb cross which Johnson was very unlucky not to reach with his outstretched leg. Riley was not troubled in collecting the ball.

Gillespie and Tunstall who thoroughly understand each others wants, were responsible for another advance on the Liverpool goal, which ended in a fine save from Riley. The very next minute, Gillespie passed through a forward pass that found Tunstall admirably placed, and his centre found the Liverpool defence rather wide apart. Gillespie, too, found this defence suitable for his schemes, and he was unlucky when his shot just dashed wide of the upright.

Fifteen minutes gone and the crowd was silent. No one had expected this lightning start by the blades. But the South African, Hodgson raised their spirits in the sixteenth minute. From Liverpool’s first real attack of the day, The South African will no doubt get the credit, but it was great play by Hopkin and Chambers who made his goal a possibility. Hopkin was carrier-like in his effort to get in his centre and when Chambers edged a little bit nearer to the goal mouth, Forshaw made a bad mis-kick. Perhaps it was as well, for it gave Hodgson a gilt edged opportunity, which he accepted without demur. His crashing shot left the keeper with little chance.

The game so far had been of great interest and in the next phase Liverpool’s attack displayed much more energy and better ideas than it had earlier in the game. Liverpool should have gone further ahead when Alderson could only make a half save when Forshaw drove straight at him, for that let in Hopkin who only had Alderson to beat but incredulously he managed to put the ball just wide of the left hand upright.

Despite all the Liverpool pressure in this part of the game it was actually Riley who had most of the work to do between the sticks, and it was as well Riley was at the top of his game, for if he had not been so, Gillespie could have scored twice. Gillespie’s shooting was magnificent. We may look at Gillespie as a shooter, but he is a maker of the bullets rather than the marksman. Football is an absolute pleasure when you have someone of his calibre on the park, and even when he put the Liverpool goal in danger, one could hear the admiration of his work all around the ground and not just behind the Stanley park goal.

The shooting in general was good, Riley using his care and judgement in preventing Boyle from scoring, and again when Tunstall shot right across the face of goal minutes later. One feature of the Liverpool attack thus far, was the tenacity shown by Walsh, who gave Green more than one anxious moment, and he once forced Birks to kick out quite wildly to save his lines. Liverpool’s attack entered yet another quiet period and if it wasn’t for the sterling work of Lucas, Longworth and Riley, Liverpool would find themselves level. Once or twice they were somewhat fortunate in their defence. One time in particular, when Lucas, with an overhead bicycle kick, presented Johnson with a glorious opportunity, which sadly he didn’t accept in the spirit it had been offered.

Liverpool appeared to get their second wind shortly after and the play once again became lightning fast. When Forshaw dashed through the middle to accept a wise pass from Hopkin, he found Harris mis-kicking the ball and leaving him to go clear on the Sheffield goal. As the goalkeeper approached Forshaw, he very cleverly paused before releasing a powerful drive and the keeper made his premature move. When it ultimately left his boot the keeper had already committed himself to diving left, the ball however flew over his right shoulder. One can not express how clever this move was.

Sheffield showed lots of spirit late in the first half and efforts from Sampy and Gillespie both went close. Gillespie rallied his troops together in a fine effort to wipe off at least one goal of the two that Liverpool lead by, but although they came close, it must be remembered that a miss is as good as a mile in football. As the warriors left the field at half time Liverpool’s two goal lead was in tact.

Backed by the might kop roar in the second half, Liverpool resumed by forcing an early free kick, which had to be taken twice for a Sheffield infringement. This cleared, Gillespie made a possible opening for Johnson, and only a superb tackle by Lucas prevented the Sheffield forward from scoring. Walsh and Hodgson transferred business as they often did in games. As Hodgson ran down the wing, Birks in trying an almighty punt up field, sliced the ball across to Hopkin on the opposite wing. Hopkin tried a centre and Harris brought his hand into play and a penalty resulted.
Forshaw stepped forward and with his usual aplomb netted from the spot.

The Sheffield defence were having great difficulty with the sun that was lowering in the late summer sky, the brightness was not diminishing as the game progressed. And when Alderson came to punch a cross he was lucky not to concede a goal when it grazed his own bar.

The Liverpool pressure urged on by the kop grew. We had not many minutes to wait for goal number four. A goal by the way, which left everybody astounded. A throw in was sent into midfield, where Forshaw was obviously stood offside. Realising his position and the rules of the game, he refused to budge, and while all the Sheffield players stopped playing, Hodgson, who was onside went on his way and left Anderson helpless.

This was a tragedy from a Yorkshire point of view, but it was no less a tragedy than Hodgson’s fifth goal, which followed shortly after. For it was purely a defensive error which let in the lengthy inside right, who squeezed the ball in between Alderson and the upright, for goal number five.

Hodgson had completed his first hat-trick for Liverpool and based on this performance, I would suggest it will not be the last we see from this very talented South African.

All that we needed now was for Forshaw to complete his hat-trick and he was so, so unlucky, when his bullet header came back off the crossbar minutes later. An inch lower would have seen Liverpool go Six goals clear. Spears today had had a marvellous game against a very hot wing and Longworth must too be mentioned for his very tactful display.

As the game drew to a close Liverpool’s goal had a narrow squeak when a mercer cross found Johnson unmarked, but he was not up to taking the gift offered by the Liverpool defence.
However the same combination did get a consolation just before the final whistle when great work from Mercer again, gifted Johnson with the same opportunity, this time he made sure his effort hit home.

Note
Chambers (Inside Left) had proven to Liverpool over many years now that 20-30 goals a season was well within his scope. Forshaw (Centre Forward) scored hat-tricks for fun and also weighed in with 20-30 goals a season. With the addition of the South African, Hodgson (Inside Right), I fail to see how any opposition will keep a clean sheet when all three play in the same side. A good striker is a necessity in the game. A brace of good strikers is very rare indeed. The Liverpool side now contains triplets of awesome power, that’s just downright greed. God help the first division when Liverpool come to town.