Forty years ago Liverpool played their first European game at Anfield Road. The game was played on the Monday the 14th of September 1964. Their opponents were the Icelandic champions K.R. (Knattspyrnufélag Reykjavíkur - The Reykjavík Football Club). The first leg in Reykjavík ended with a 5:0 victory for Liverpool. It was clear for everyone that the Icelanders were going to be up against it the second leg.

The K.R party arrived in Liverpool firmly in the public eye. After all they were the first foreign club to play at Anfield Road in a competitive game. The local papers wrote a lot about the visitors. Focusing not least on their wives! The K.R. players had taken their wives and girlfriends with them for a bit of a holiday!

Liverpool had lost their league game on Saturday 1-0 away against Sheffield Wednesday. Liverpool had in fact only won two of their first seven league games of the season. Peter Thompson and Gordon Wallace were not fit. The Scot Bobby Graham came in for his debut. Alan A´Court took the other available place for a game that proved to be his last in a great career for Liverpool.

The Anfield faithful were in good spirit looking forward to their first European night at Anfield Road. The announcer welcomed the visitors from Iceland before the game. In one Icelandic newspaper, Tíminn (The Time), it was reported that the national anthems of England and Iceland were played before kick off, just like before an international game. The Icelandic journalist reported. "It was strange to hear long haired Liverpudlians - Beatles singing God save the queen." Ron Yeats won the toss and K.R. played towards The Kop in the first half. The Icelandic side played much better than in the first game and according to the Icelandic newspapers played their best game of their season.

Liverpool played in their red shirts and white shorts. The all red kit was not yet in place. K.R. played in as always in their Newcastle like strip. The first half was especially good by the Icelanders. The visitors had the first chance in the opening minutes. But Liverpool opened the scoring in the 13th minute and it was Gerry Byrne who had the honour of scoring Liverpool´s first European goal at Anfield Road. His long range effort from 30 yards up in the top corner was indeed a historic moment. Ten minutes later Ian St. John scored with a good shot from inside the penalty area. But in the 30th minute the Icelanders managed to reply. A good passing move ended with Gunnar Felixson scoring in front of The Kop. The Anfield crowd applauded Gunnar after he had scored. 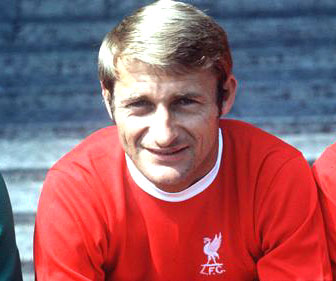 The second half turned out to be constant Liverpool pressure. Wave after wave of Liverpool attacks came towards The Kop throughout the half. Roger Hunt scored Liverpool´s third in the 50th minute. His shot was not too good and Heimir Gudjónsson should have saved it. This was the keeper's only mistake in the game. The debutant Bobby Graham scored the next goal in the 65th minute. He headed the ball home after a cross from the left. Two minutes later Willie Stevenson scored with a powerful long-range drive. He was even further out than Gerry Byrne when he opened the scoring. Willie´s strike was the best goal of the game! Ian St. John scored the last goal in the 74th minute. He scored from a close range after the visitors didn´t manage to clear their box. Liverpool could have scored more goals, but K.R.'s keeper, Heimir Guðjónsson, was his side´s best player and was often applauded by The Kop for his heroics. The Kop even cheered the K.R. players and booed their own with smile on their faces. But the heat was on the K.R. keeper but he managed some fine saves from Roger Hunt, Ron Yeats and Bobby Graham in the second half. Bobby had the last chance in the final minute when he hit the crossbar. Liverpool had won with a lot to spare.

The Kop celebrated a win on the debut European night at Anfield. But the Liverpool crowd had also taken to the fighting spirit of the Icelanders and applauded them when the final whistle sounded. The Kop even chanted "Reykjavík, Reykjavík, Reykjavík" at the end! The Icelandic newspaper, Tíminn, reported "It was obvious that the crowd had liked how K.R. played." The Liverpool players made a guard of honor and clapped the Icelanders off the pitch. An Icelandic reporter said Liverpool´s captain Ron Yeats shook every K.R. player´s hand. A wonderful sporting gesture on and off the pitch. The players of K.R had made themselves proud in spite of losing 11-1 on aggregrate to the English champions.

The final assement in Tíminn was this. "This game marked the end of our first European experience. All things considered it can be said that all went well. Of course Liverpool won 11-1 on aggregate. But it couldn´t be expected to lose any less to the English champions."