"A new man - beg pardon, a flag - floated on the old staff, bearing the letters, L.F.A. surmounted with the liver. Right proudly did it wave over the field of battle and seemed to beam on its patrons with a hopeful smile," reported Field Sport on 19th September. Liverpool's followers were quite optimistic for John Houlding's side which started its debut season by scoring 33 goals against 1 in the first 6 games in the Lancashire League and the FA Cup. The biggest win being 9-0 vs Newtown in a FA Cup 2nd qualifier. 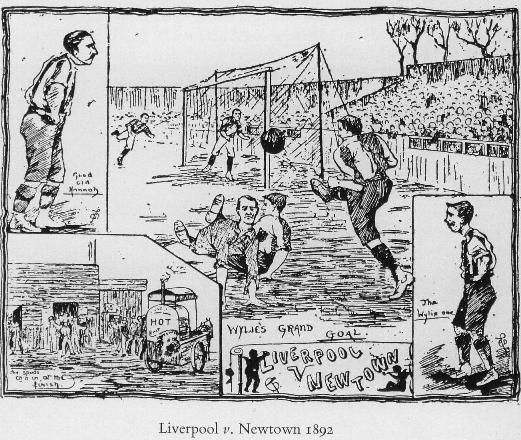 A drawing of Liverpool's win vs. Newtown featuring one of Wyllie's goals. (Click on the image for a bigger version)

Liverpool finally met some resistance at Blackpool's Raikes Hall Gardens on 5th of November. Liverpool were outclassed 3-0 by Blackpool that proved to be Liverpool's main league rival.

The McQueen brothers, Matt and Hugh, from Harthill in Lanarkshire, Scotland had made their debuts in the 9-0 win vs. Newtown after arriving from Leith Athletic in October. Both brothers missed the game on 26th of November vs Rossendale because Hugh was getting married in Scotland. I doubt Liverpool's current manager would allow any of his first eleven getting married on matchday! 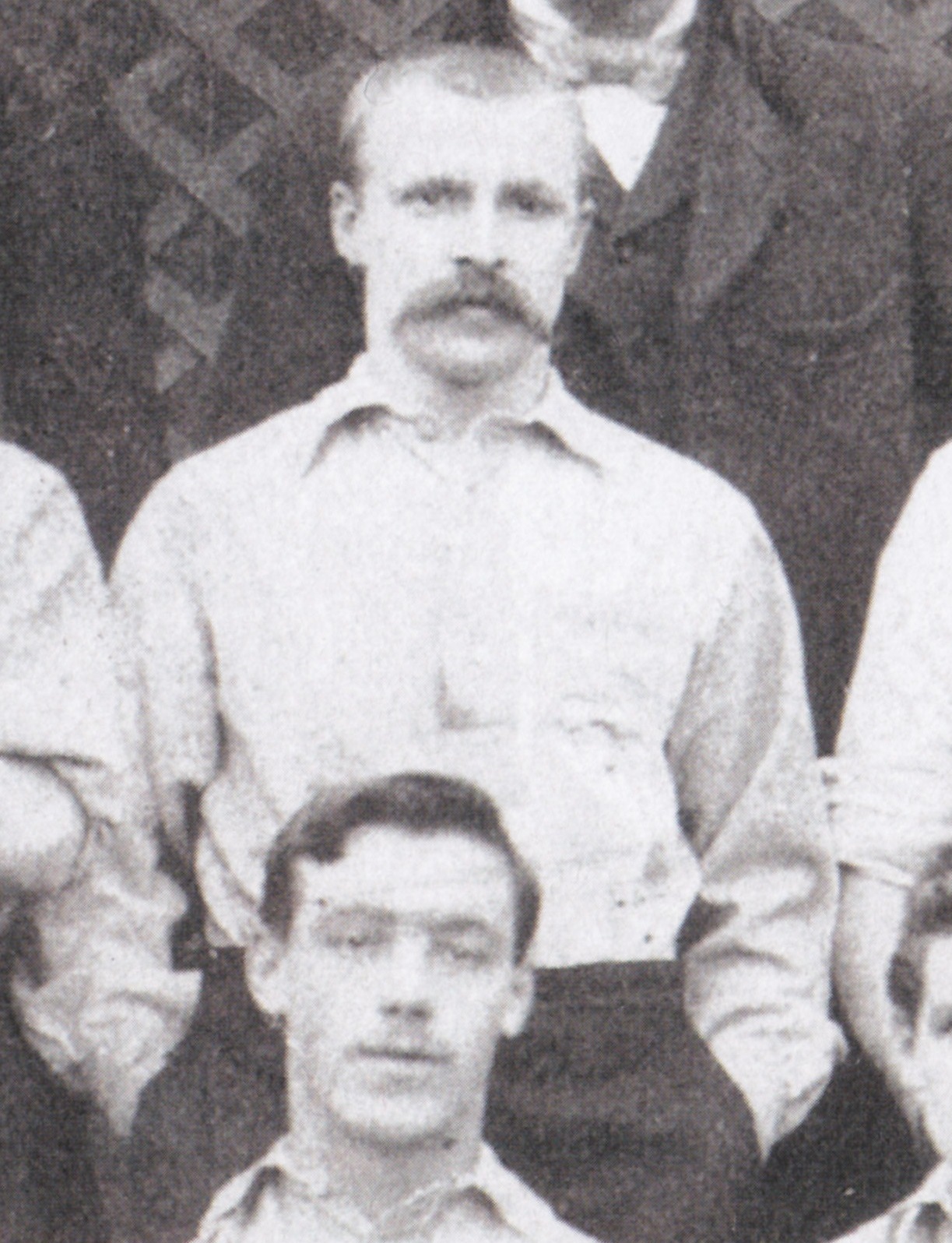 Matt McQueen is one of the biggest names in the history of the club. He played in all positions in his time at Liverpool, even 41 games in goal. When he got his much deserved benefit match from the club, Liverpool Mercury's reporter described him "as honest and gentlemanly a footballer as ever came into Liverpool." After joining the board of directors at Liverpool he managed the club from 1923-1928. His highlight was when he steered Liverpool to the championship in 1923 after taking over from David Ashworth who left the club in mid-season.

Four rounds later in mid January Liverpool had caught up with Bury, after winning 4 league games in a row, amongst them a 2-1 win over Heywood Central in six inches of snow as no one had cleared the field of play!

Liverpool had won 11 out of 13 League games in total, but drew for the first time 0-0 on 14th of of January vs West Manchester away and lost the succeeding game, a vital game at the top, vs. Bury 0-3.

This was Liverpool's final loss of the season. Liverpool scored 20 goals vs. 5 in their last 7 league games, winning 6. Not even the loss of goalkeeper Sidney Ross through injury for the last 4 games of the season, knocked them out of their stride. Matt McQueen, who had scored two goals for Liverpool in the 3-0 win vs. Nelson the week previous, took Ross' place in goal who was injured. Matt was truly a unique utility player. Ross' injury was so serious he never turned out for Liverpool again. 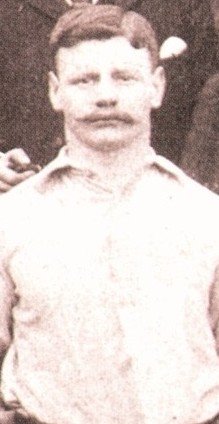 Team selection was mostly in the hands of the club's directors and at the time they clearly felt some improvement was needed from the players and decided to voice their opinions in the programme notes as against Cliftonville in April 1893.

Left-back Duncan McLean was too adventurous for their liking: "Why will McLean persist in marring his really brilliant and effective play by getting too far away from his own goal? By all means back up the halves, but a full-back has no business whatever amongst the forwards, except on the defensive. If Mac will get rid of this one fault he will be as good a back as there is in England today." Forward John Smith didn't escape the directors' attention either: "Then let Smith not dally so long with the ball; let him either pass or shoot. He is playing a good game at present, but for a little dilatoriness."

Despite Liverpool's progress in the last few weeks of the season Blackpool seemed destined for the title. Liverpool had played all their 22 games, but Blackpool had one game left against Southport Central that had lost 13 out of 21 league games. If Blackpool would win or draw they would conquer the Lancashire league. Blackpool failed at the last hurdle losing 1-0 to Southport Central. Liverpool and Blackpool both collected 36 points from a possible 44, winning 17, drawing 2 and losing 3. Blackpool had a better goal difference, 82-31 = +51 vs Liverpool's 66-19 = +47, but in this era league positions were decided by goal average, goals for divided by goals against. Liverpool won the Lancashire league because of a goal average of 3.4, Blackpool had 2.6.

Liverpool had managed quite a feat, winning the Lancashire league at first attempt. Mr. Smith, treasurer of the Lancashire league, presented Liverpool with the 200 ounces league trophy at John Houlding's headquarters, The Sandon Hotel, where the annual meeting of the Lancashire Football League took place. Mr. Smith "spoke of the unexampled success which had been obtained by Liverpool in the first year of its existence". Councillor Houlding replied on behalf of Liverpool FC: "that the credit of the club's success was no doubt due to excellent management exercised by the committee."

The programme from Liverpool's 7-1 win in their first game on 1 September 1892.

With the Lancashire league cup secured a potentially dramatic game loomed on the horizon which would conclude Liverpool's first season. Liverpool had beaten Bootle 1-0 in the semi-finals of the Liverpool Senior Cup in front of 5,000 spectators which showed the local's interest in this competition. How appropriate that Liverpool's adversary in the final would be Everton.

The first derby between Everton and Liverpool took place on 22nd of April 1893 on Bootle's ground in front of 10,000 people. 1st division Everton were considered more likely to win, but president Houlding was determined to show his old team the might of his new one. Herbie Arthur, from Blackburn Rovers, had been handed the difficult job of refereeing the match.

Predictably the players didn't give an inch and the battle became quite heated. The ref had a word with Joe McQue for being too enthusiastic. Liverpool took the lead roughly 30 minutes into the game and to add insult to injury it was former Everton player, Tom Wyllie, who scored with a hard, low shot past Williams. The match ended in controversial circumstances as Everton demanded a penalty after a Liverpool defender had fisted the ball away in the penalty area. The ref consulted his linesman and then awarded a drop-ball which was kicked clear and then the final whistle went.

Despite this controversial ending Liverpool were "either equal or superior in every department" in this historical game. Liverpool Mercury reported: "McOwen in goal did all that was required of him in a confident manner. Hannah and McLean gave a splendid exhibition of defence, and neither seemed bothered much by the Everton attackers, their kicking being strong and well directed all through. The half-back line was perhaps the rock upon which Everton stranded. McQue at centre was happy in the extreme, and completely spoilt Hartley, the work of McCartney and McBride being almost as good. With the half-backs so much in evidence the Liverpool forwards had plenty of opportunities of showing their capabilities, and they did it in a pleasing way. They displayed no selfishness, and taking and parting with the ball in no halting fashion were very speedy. The pace was remarkable, and that it should be sustained as it was on such a warm day was evidence that Liverpool were in good condition."

Everton protested against the result, and complained about "the general incompetence of the referee" and Liverpool were not presented with the trophy after the match amid the controversy. Everton's appeal was later dismissed, and the Liverpool Senior Cup was presented to Liverpool.

Liverpool had won the Lancashire League and the Liverpool Senior Cup in the club's inaugural season. On Friday 1st of September 1893 one day before Liverpool played their first ever 2nd division game both cups were stolen from the pawnshop of Mr. Charles Gibson in Paddington, Liverpool where they were on display. The club had to pay 130 pounds to replace them. This was just the start of the colourful history of Liverpool Football Club.

Copyright - Arnie at LFChistory.net ([email protected]) - researched from articles in Liverpool Mercury and Liverpool Echo from 1892-93.