As McMahon’s Anfield career had been drawing to a close so had Steve McManaman’s been bourgeoning. McManaman had made his debut on 15th December 1990 almost exactly 12 months before McMahon played his last game for the Reds on 21 December 1991. McManaman couldn’t hold down a place as Graeme Souness tried (with significant lack of success) to emulate Kenny Dalglish’s managerial achievements but in the 1991/92 season he forced his way into the side and ended the season with a man of the match performance in the FA Cup Final against Sunderland. 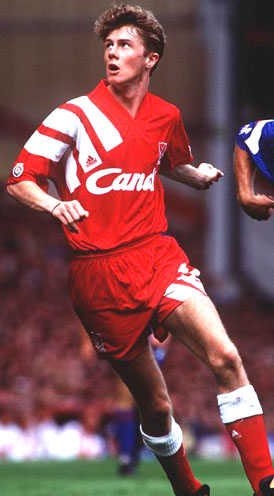 He was something of a maverick and it was a difficult job for his managers to apportion him a role that would give him and the team the best of his undoubted skill. He started off as an out and out winger but eventually was given a free role by Roy Evans (some would say that Roy had little say in the matter!) and turned in more sublime performances than the dud ones that some disenchanted fans remembered him for.

Sadly McManaman’s career at Anfield ended in some rancour. He refused to sign an extension to his contract and left at the end of Gerard Houllier’s first season on a free transfer to Real Madrid, pocketing a very substantial signing on fee in the process. He lost a lot of his popularity in the process but few will forget the goal he scored the previous season against Celtic in Glasgow which helped the Reds to a two legged victory in the UEFA Cup 1st round. With Celtic leading 2-1 in the final minute of the first leg Macca picked up the ball deep in his own half and embarked on a mazy run that took him past the whole of the Celtic defence before driving the ball past the hapless Celtic keeper. We’d got the draw and eventually went through after a goalless draw at Anfield courtesy of the away goals rule.

I prefer to remember him for that although I know some who are less charitable!!

The fourth member of my quartet of Macs is a totally different cup of tea to the other 3. McDermott, McMahon and McManaman played a total of 1070 games between them and scored 197 goals. Gary McAllister only played 87 games and scored 9 goals but is well and truly enshrined as a Liverpool legend. 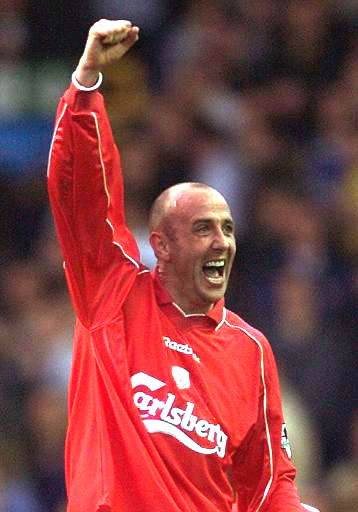 Signed on a free transfer at the beginning of the 2000/01 season he proved to be arguably Houllier’s best signing. In his two seasons at Anfield he turned in performance after performance that belied his age and he will be remembered for many things, in particular his memorable last minute free kick at Goodison Park of all places to give us all three points in the league and his ice cool penalty against Barcelona in the 2nd leg of the 2001 UEFA Cup semi final which was enough to take us to that memorable final in Dortmund against Alaves.

The dramatic events in Istanbul in 2005 have taken some of the gloss off the events in the Westfalion Stadium that May evening in 2001 but for those of us lucky enough to be there the match was absolutely spellbinding. Gary Mc put us 3-1 up just before half time only for Alaves to come storming back in the second half to level at 3-3. Robbie Fowler’s late goal seemed to have settled it for us only for Jordi Cruyff to head a late equaliser to take the game to a ‘golden goal’ extra time. In other words a goal in extra time would win the game.

Understandably there was some caution during the extra 30 minutes but Alaves contrived to get two of their players sent off and with the final whistle looming we got a free kick out on the left wing. Up stepped Gary Mc to curl a long ball to the far post where it was headed in by the unfortunate Geli. We’d won via an own goal!

Liverpool were back in the big time and Gary McAllister had written his name into the all time LFC Hall of Fame.

So there we have it. Four Macs, four different personalities and four different types of player but all indelibly written into the history of our club.