Every one of those seasons in Division 2, apart from the first one, brought its tantalising possibility of promotion but, somehow, the Easter programme seemed to scupper us on a regular basis. There is no doubt that LFC were in great danger of joining the ‘also rans’ in the footballing hierarchy. The importance of T V Williams’ approach to Huddersfield cannot be over emphasised and my own feelings about Shanks’s appointment more or less define my ongoing loyalty to our club. There were probably many other managers who would have been capable of getting Liverpool out of the 2nd division but it is unquestionable that only the great Shankly could have grabbed the club by the scruff of its neck and turned it into an entity capable of competing with the very best in World football.

One aspect of Shankly’s appointment that is often overlooked is the fact that, during what remained of his first season at Anfield (from December, 1959 to May, 1960) he did not buy one player and at the end of his first full season (60/61) we once again finished 3rd with no more points than we had been getting under previous managers and his only significant signing had been Gordon Milne from Preston North End. The summer of 1961 saw the real beginning of the revolution with the signings of Ronnie Yeats and Ian St John and, in fact, those three were the only ones that Shankly added to the squad that he inherited and which went on to win the 2nd Division title in 1962. He added goalkeeper Jim Furnell when Bert Slater was summarily jettisoned after letting a shot from Preston’s Peter Thompson pass over his head in an FA Cup replay at Old Trafford, but otherwise he stayed loyal to the players who were already on the staff when he arrived. Two players who had particular cause to be grateful to Shankly’s loyalty were Tommy Lawrence and Gerry Byrne. Both of them had been on the books well before his arrival but had hardly figured in the first team, Lawrence not at all and Byrne only fleetingly. Both went on to win international caps for Scotland and England respectively.

As the promotion season gathered pace the atmosphere at Anfield really started to become a factor in the team’s performances and Shankly used it to the utmost effect. He was, of course, an interviewer’s dream. All they had to do was suggest a situation and Shanks would expound at length about the subject that had been raised and then to describe the value that the Kop, in particular, had on the team’s performances. Almost without us realising it we had become part of the team’s success.

Ironically (perhaps inevitably) Shanks’ achievements have been overtaken, most notably by his reluctant successor, Bob Paisley, but it is indisputable that the Liverpool Football Club that we are privileged to support today was shaped by the canny Scot who extricated us from the morass of 2nd division football and he it was who had the vision to realise that we had a club capable of taking on the best that Europe could provide. Sadly, by the time that we finally triumphed in the European Cup in 1977, he had retired and he was never able to enjoy the public adulation that he truly deserved. 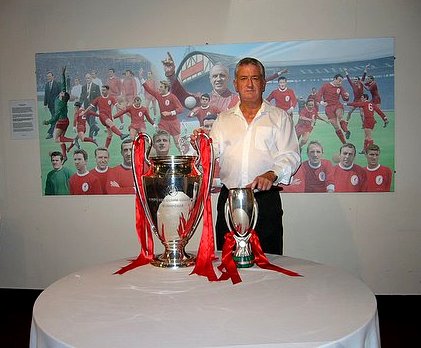 I have a few memorable personal recollections of the great man. Immediately after the never-to-be-forgotten European Cup win in Rome in 1977 Tommy Smith had his testimonial game at Anfield, which was a match between Liverpool (who had just returned from Rome to an open topped bus reception through the streets of the city) and an England XI. I can’t remember the result but, because my best mate was the organiser of Smithy’s testimonial committee, I was in the directors box for the game and had access to the trophy room afterwards. Talk about a kid in a candy store!! I caressed both the League Championship trophy and the European Cup and got stuck into the scotch whilst having a conversation with Bobby Charlton (I kid you not). Eventually I saw the great man standing in a corner of the trophy room, totally alone, traditional white mac draped on his shoulders. I felt compelled to speak to him but had difficulty summoning up the bottle to do so. Eventually, after a couple more large drams I plucked up courage to pass him on my way to the toilet. “This is all down to you Mr Shankly” I blurted out. “Thank you, son” he replied. I went to the toilet and cried my eyes out. I should maybe point out that I was nearly 40 at the time so his reference to me as ‘son’ and my lachrymose reaction were indicative of the way that football transcends normal human responses.

The other memory of Shanks that I will never forget was the day after his death, 30th September 1981. We were playing a 2nd leg European Cup tie against Oulu Palloseura at Anfield, having won the first leg 1-0 and we were 2-0 up at half time so the tie was over. For the second half the Kop chanted “Shankly, Shankly, Shankly” for the whole 45 minutes. I sat in the Main Stand and, once again, cried my eyes out. I can’t imagine what the Palloseura players must have made of an almost surreal experience.

I am finishing this piece of trivia on 30th September 2006, the 25th anniversary of his death and, whilst I am disappointed at another undeserved away defeat, I loved the way that our away supporters (many of whom were probably not even born whilst Shanks was in charge) chanted his name at the beginning of the game.

I am convinced that many of us don’t appreciate how lucky we are to be privileged to support one of the few remaining true football ‘clubs’, as opposed to businesses, that survive in today’s manic drive for profit and ‘brand awareness’. Maybe the recent news about our prospective new stadium and the hype that will accompany our move into it will remove us from the list of true football clubs, but by the time that it happens (if it ever does) I doubt that there will be any proper football clubs left at the top level anyway.