Matteo was brought to Liverpool at only eleven-years-old after catching Kenny Dalglish's eye when he was watching his son Paul play for Birkdale United. It was Graeme Souness who blooded the 19-year-old in October 1993 as a left midfielder. Matteo was now on the other side of those carefully-painted white lines but old habits die hard and he found himself singing along to “You’ll Never Walk Alone” before realising that he was no longer a fan but a player! "He's a young boy with an awful lot to offer. We just don't yet know his best position," Souness said following his debut against Manchester City. Matteo, who was making his breakthrough at the same time as Robbie Fowler, got a decent run in the side but once Souness was sacked Matteo only made a few sporadic appearances in Roy Evans' first two full seasons. He did start the first couple of games in the 1995/96 season in a three-man centre-back line but once Neil Ruddock had recovered from injury Matteo was benched. He finally got his big breakthrough in the 1996/97 season when he featured in two-thirds of the League games when Liverpool were top of the division at the turn of the year but faded away in the last third of the campaign.

In 1999/00, when Matteo was taking orders from his fourth manager in his time at Liverpool, Gérard Houllier, he played left-back. Matters come to a head when Houllier told Matteo prior to the 2000/01 season that Christian Ziege was on his way from Middlesbrough and going straight into the first team. Devastated at not even being given a chance to fight for his place 26-year-old Matteo moved across the Pennines to join Leeds. “On the Monday, I was signing a five-year deal that, by the standards of the day, was a lucrative one. But, just four days later, I was on my way out of Liverpool," Matteo revealed in his autobiography. “I was in shock. How could things change so quickly in just four days? The thought of leaving was an upsetting one. But, for the good of my career, I needed a fresh start. So, I went. It meant I missed out on all the trophies that Liverpool won the following season. I’ll admit that seeing the lads pick up the FA Cup, League Cup and UEFA Cup was difficult."

Matteo was made club captain when Rio Ferdinand left Leeds to join Manchester United in the summer of 2002. A few months earlier Matteo had made his Scotland debut. Even though he had English parents he was born in Dumfries and was even eligible for Italy as his grandparents are Italian. He had already played for England's u-21 team and called up by Glenn Hoddle to the senior squad but injuries prevented him from making his full England debut. His former boss, Souness, persuaded Matteo to join Blackburn in 2004 and after his time at Ewood Park where he was captain for a while, he moved to Championship club Stoke City on a free transfer in January 2007. Although Stoke were promoted to the Premier League at the end of the 2007/08 season, Matteo had played little part in that success. Injuries were starting to seriously affect Matteo’s availability and with more time on his hands than if he was fully fit, he got dragged into a very serious gambling addiction, on which he squandered an absolutely massive sum of money. After an eventful career Matteo called it quits at the end of the 2008/09 season.

"The question I always ask myself is 'could I have done more with my career, could I have been better?' And the answer to that is 'yes'. My age group in football were the last of an era. We were brought up into football having a bevvy, enjoying ourselves, we were out three or four times a week. I think if I'd have lived my life better I might have played for longer, suffered less injuries."

After retiring from playing Matteo ran up heavy gambling debts and was declared bankrupt in 2015. He worked as a pundit for LFC TV. In November 2019 he required emergency surgery after suffering a brain tumour.

Dominic Matteo: In my Defence

Matteo's story is an interesting one where he has opened his heart and spoken very honestly about what he has achieved and, just as importantly, what he learnt from battling with the negative influences that surround the game. 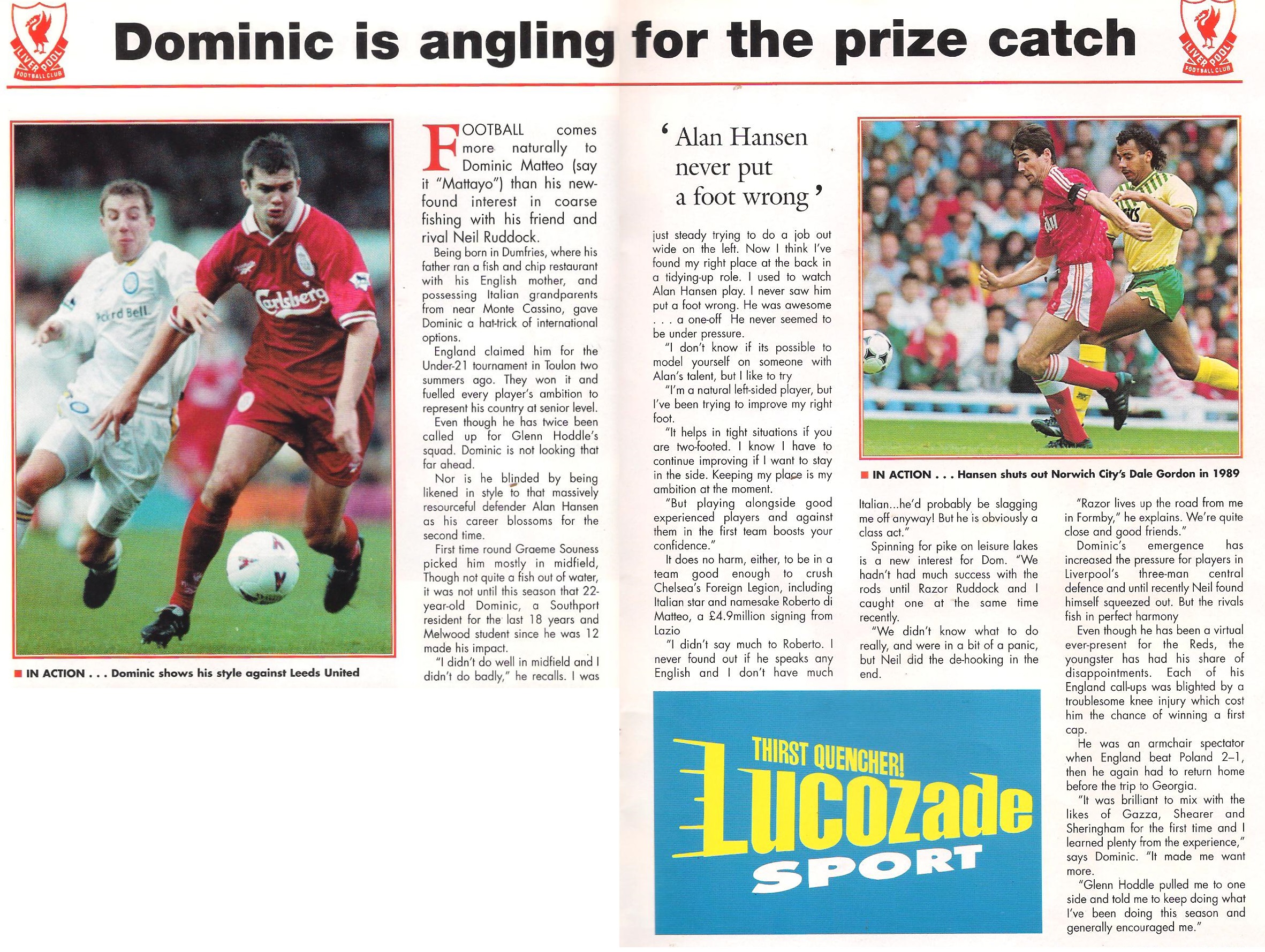 Dominic is angling for the prize catch - Liverpool match programme 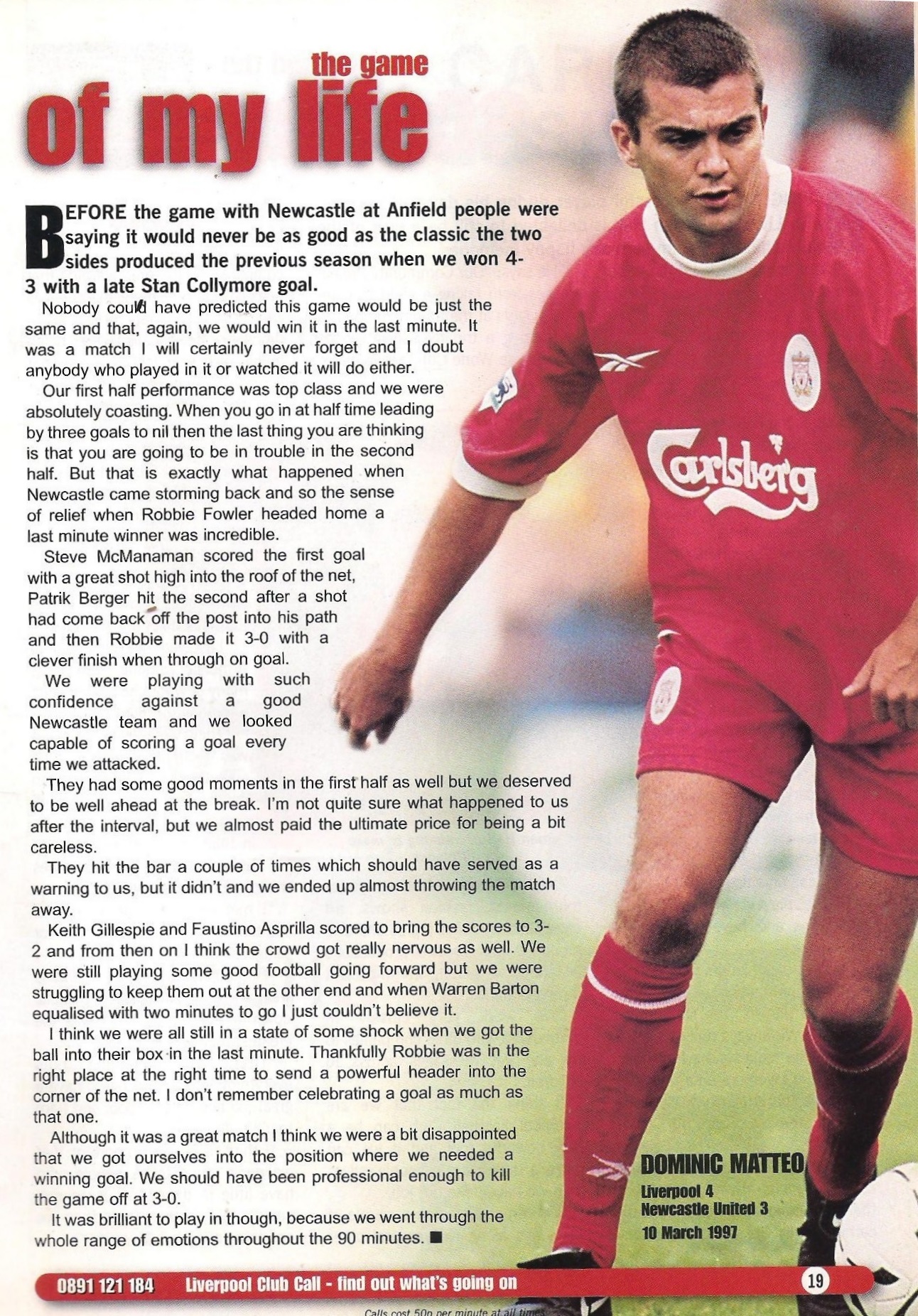