Ray Kennedy was a striker at Arsenal, scoring 71 goals in 212 games in five years, and in his first full season as professional, a vital part of the triumphant side that won the League and FA Cup double in 1970/71. Kennedy’s arrival at Anfield on 12 July 1974 was completely overshadowed by the shock news on the same day that Bill Shankly, the man who had signed him from Arsenal, had decided to step down from the manager’s chair with immediate effect. Shankly was happy with his last task as manager: "There is no doubt Kennedy will do a good job for Liverpool," he declared to the press. "He is big, brave and strong. His signing means that we now have the greatest strength in depth that we have ever had. Kennedy will cause plenty of trouble to defences. He fights all the way and he was at the top of my list of my wanted men. Maybe it will be said that one of the last things I did at this club was to sign a great new player." Kennedy was physically very strong and that impressed Shankly who was still around Melwood. "I’ve seen him in training and he looks good. He reminds me of Rocky Marciano." Kennedy scored in each of his first three games for Paisley’s Liverpool and his strike-partner Phil Boersma, who had taken the place of the suspended Keegan, was also getting on the scoresheet. Eight goals in Kennedy’s first 13 matches was no mean feat but two goals in his next 11 were less impressive. Toshack’s move to Leicester fell through and he resurrected his partnership with Keegan. Kennedy was back in the starting line-up in February but didn’t get on the scoresheet in nine games for the rest of the season. Five goals in 25 League games was a meagre return from a young striker who had enjoyed such a good reputation in London and he was being linked with a move to Wolves.

Kennedy's start to the following season was less than impressive and he had been out of the starting 11 for six weeks when Peter Cormack got injured. Kennedy replaced him on the left side of midfield against Middlesbrough on 1 November and the Daily Post was concerned about his performance: "With poor Kennedy looking a most temporary left-half, the nimble Armstrong, Souness and Mills outnumbered the loyally-working Callaghan." Paisley hadn't played him there just on a whim: "One of my old friends told me that before Ray went to Arsenal he had played much deeper. I then knew I could back my instinct and see if he could recapture his spark." Kennedy netted two goals in the following 6-0 win over Real Sociedad and two goals in the next four. The former cumbersome forward was playing with renewed vigour in his new position. The move was so successful that it immediately saw off Cormack, who had played in that position for the last two seasons. Kennedy had made the No. 5 shirt his own and won England recognition at last in 1976. By the end of the season, he had added League Championship and UEFA Cup winners' medals to the haul he already had from his Arsenal days. For the next five seasons, he only missed five first division games and could boast three winners' medals in the European Cup. His success with Liverpool brought him nearly 20 full England caps to add to the six he had gained at U-23 level as a youngster in the Arsenal team. He also contributed a marvellous total of 49 goals for the Reds in all competitions during those amazing five years and his runs from midfield into scoring positions brought him almost as many goals as he created for others with his astute vision and distribution of the ball.

One of the most important goals Kennedy ever scored came in the semi-final of the European Cup in 1981 when the odds were stacked against Liverpool after Bayern Munich had ground out a 0-0 draw on Merseyside. An already-depleted Liverpool team suffered an early setback when Dalglish limped off injured early on but Kennedy's experience and composure finally told when seven minutes from time he strode forward to collect David Johnson's pass and stroked a firm right-foot shot away from the home keeper for the priceless away goal that would take the club through to their third European final in five seasons. Kennedy was 30 that summer and 20-year-old Irishman Ronnie Whelan was ready to take over from him on the left. Kennedy could be happy with his Liverpool career but undoubtedly it would have been even more impressive if the early stages of Parkinson's disease hadn't affected his physical condition. Since he had moved to Liverpool he had felt exceptionally tired after training and was sweating profusely: "At Liverpool, I could never understand why I was the odd man out, particularly after a match," Kennedy revealed in his autobiography. "Usually the adrenaline is pumping and most of the lads would be talking about what happened on the pitch, grabbing a coke or chicken leg. They were always doing something, all except me. I used to slump hunched in my seat too tired to move. I tried to kid myself I was more tired because I had worked harder than the others during a match, yet I knew it was not the case. The odd thing was I could always perform for the full ninety minutes and was rarely the one to be substituted."

Kennedy joined his former teammate John Toshack at Swansea in January 1982. As the Swans finished fifth Kennedy received a sixth League championship medal having played enough games for Liverpool to qualify for one. Toshack made Kennedy captain for the forthcoming season that ended in relegation. Kennedy was struggling for fitness, unbeknownst to Toshack because of Parkinson's. Toshack stripped him of the captaincy and complained that he wasn't trying hard enough, was lazy and overweight. Shortly after troubled Swansea sacked Toshack and Kennedy was given a free transfer in September 1984 after 49 games for the club in two-and-a-half years. In a desperate move to play regular football, Kennedy joined the bottom club of the Football League, Hartlepool United, which enabled him to move back to his native North-East, but by this time the onset of the terrible disease he had been suffering from became more acute. Kennedy managed 23 games in the 1983/84 and during the summer of 1984, he got a surprising opportunity to move to Cyprus to become Pezoporikos' player-coach. Kennedy enjoyed living there but the team struggled under him and he was not coping either mentally or physically and resigned in January 1985.

In November 1986 Kennedy was finally diagnosed with Parkinson's disease. He coped bravely with increased lack of mobility and dependence on medication to control his condition and became a public figure to provide funds for research. In 1991 his loyalty to both Arsenal and Liverpool was rewarded with a well-attended testimonial match at Highbury, emotional experience for him and his family and all the supporters. Arsenal and Liverpool fans paid the ultimate tribute to Ray Kennedy's great service to both clubs, at Anfield on 21 April 2009 before the Premier League match between the two teams. Kennedy's number at Liverpool, "5", was held up by coloured cards at the Kop and Kennedy's Gunners' number "10" at the away section in the Anfield Road lower. Kennedy stayed on to watch the game, a thrilling 4-4 draw. Ray passed away at 70 years of age on 30 November 2021.

Fans really are my ray of hope

Retro Reds interviewed old favourite Ray Kennedy in 2008 and we wanted to share with you this excellent interview.

Giving grounds for hope to an Anfield legend Ray Kennedy

An inspiring story from fanzine Through The Wind & Rain.

By David Prentice in the Liverpool Echo.

"Bertie Mee, Arsenal's manager, told me he was buying Brian Kidd to play in my position but that I could stay and fight for my place or I could talk to Liverpool."

"When I first arrived at Anfield I struggled with my form and don't think the fans rated me but as soon as Bob Paisley moved me to midfield that's when they started to appreciate me."

"Liverpool fans are constantly on the message boards of .tv and other sites asking about you and I understand some have been in touch. What does this support mean to you?

It means an awful lot to me. I didn't realise how much I was thought of by the fans. Even after all these years I still have my memories."

Ray Kennedy in November 2004 on liverpoolfc.tv

"There is no doubt Kennedy will do a good job for Liverpool. He is big, brave and strong. His signing means that we now have the greatest strength in depth we have ever had.

It has been a momentous day, but his signing shows that I am not running away. Maybe it will be said that one of the last things I did at this club was a to sign a great new player."

"Fines, court appearances, jail... we were bad for each other. We had a bit of fun, but we did it at the right time. At hotels, when we asked for the room key, the receptionist would dive under the desk and say: ‘Not you two!’ Everyone has a pal, but Jim and I went deeper than that. If something went wrong, one of us sorted it out. It was a good friendship."

Ray Kennedy and Jimmy Case were a dangerous duo

"Tactically Ray was in a different league. He had a delicate touch, a sweet left foot and his movement was phenomenal. I used to cover much more ground and tackle more and he’d cover less ground but use his head more. We worked well together. His best point has to be his timing. I’d have the ball, I’d look up and he was gone. A perfectly timed run, ghosting in from the left, losing his marker. I’d put in the simplest of balls and bang! One nil." Cross-talk by friendly rivals - prior to the 1971 final 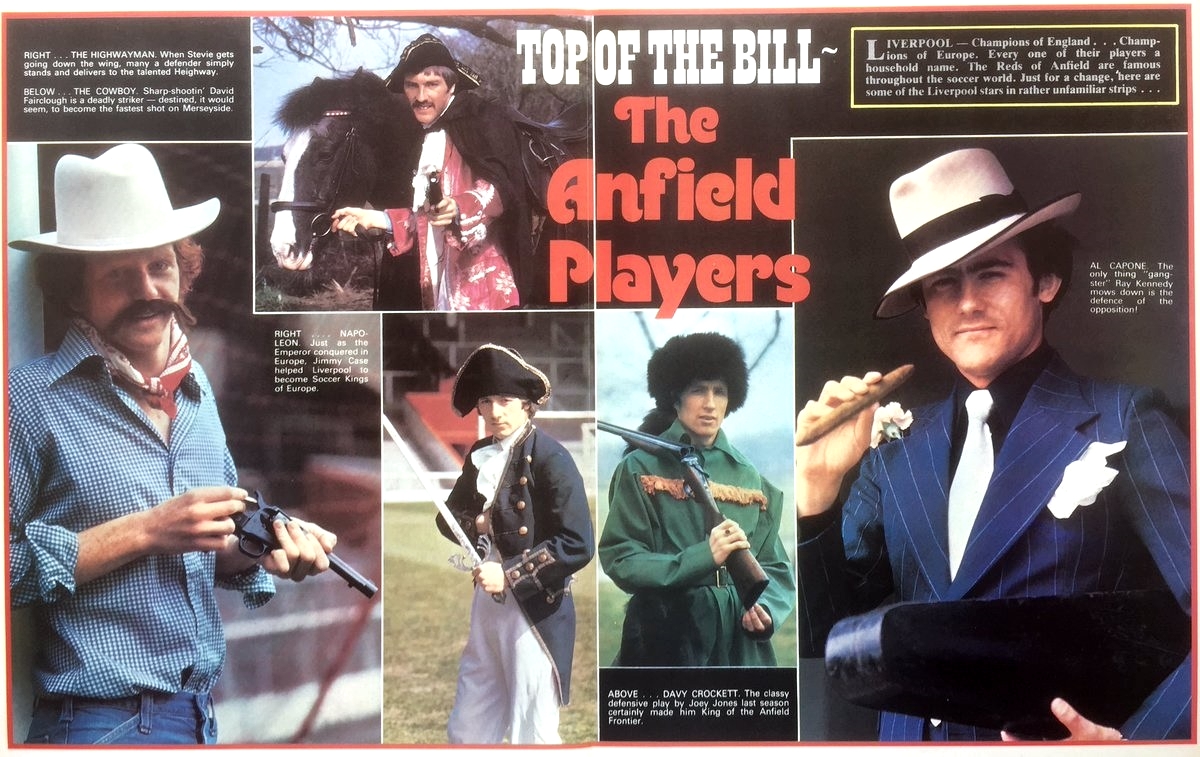 Up the Reds! - Cover of Liverpool Echo special May 1978