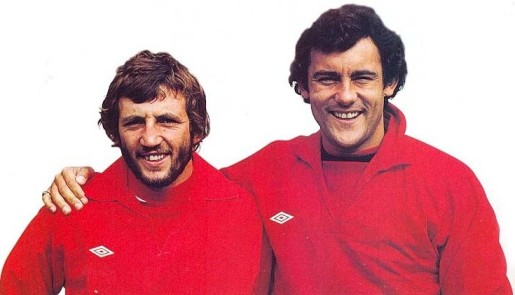 Ray said he liked Alan off the pitch, but on the pitch they didn't gel.

Ray Kennedy was Bill Shankly's farewell signing in 1974 and Alan Kennedy arrived four years later. They had a very complicated and an uneasy relationship on the field where they had to rely heavily on each other. Alan was left back and Kennedy further up the left flank. Alan was an attacking full-back and Ray wasn't too keen on doubling on the defensive duties and thought defenders should just defend. Alan used every available opportunity to charge up the field and his passes went sometimes astray much to Ray's great annoyance.

Ray joked about it later. "I had Alan Kennedy playing with me. That wasn’t easy. You’d go short and he’d hit it long. You’d go long and he’d hit it short. I used to say: ‘Alan, you took five years off my career.’ When people asked which Kennedy I was I’d say, ‘the intelligent one.’"

Alan: "Ray was an experienced player. You looked up to him: he was a well made player, an old-fashioned-style centre-forward. When I first came to the club he said to me: ´Listen, give me the ball whenever you're in trouble, I'll help you out, and I'll be ghosting in at the far post in case a cross comes in from Jimmy Case.´ The old nerves came out sometimes in me and he wasn't happy about it. But I found it difficult to communicate with him. The easiest pass to him - the short one - became the hardest pass for me. The easiest ball became hitting a 60-yard pass into the opponent's box. We worked together okay, but Ray was a stubborn man. He was difficult to get on with. He thought he was the best in the team, so his ego was way above mine, his and Graeme's. Ray was a perfectionist."

No matter what their relationship was, in the 1981 European cup final vs Real Madrid the two Kennedys combined to a devastating effect. Ray Kennedy took a throw in on the left which Cortes was in a position to cover. However the ball reached Alan Kennedy, whose surge up the touchline took Real completely by surprise. Cortes made an indifferent challenge and Alan Kennedy's momentum carried him past the defender for a thunderous left-footed shot in the far corner. Not bad for a dysfunctional duo? 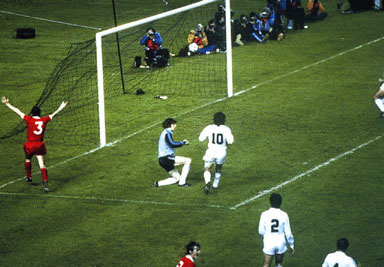 Alan Kennedy: "Ray Kennedy took the throw-in, I have to say I didn't particularly want the ball, I wasn't looking for it, I was just trying to help other players out to create a little bit of space. He threw the ball in, it hit me on the chest, and it bounced down. It was one of those occasions that the player came in - Cortez - to take me out of the game and nothing happened. Then you're thinking, 'what are you going to do? What are you going to do? Is it a shot? Is it a cross?' and basically I just blasted the ball towards the goal with the best shot I could muster and the goalkeeper made the fatal move to the left. The ball went over his shoulder and into the back of the net. I just set off behind the goal to celebrate in front of all the jubilant Liverpool fans."

Copyright - LFChistory.net - images not owned by LFChistory and we acknowledge their copyright.