Rob was a red since childhood as his grandfather, Bill Jones, had been on Liverpool's books from 1938-1954, playing 277 games. Even though Bill spoke very little about his Liverpool career, it is obvious that Rob had enormous affection for his grandfather: “I always enjoyed my grandad’s company. There was just something about his presence that felt magical.” Even during his days as a fledgling professional at Crewe, Rob still travelled to attend home matches at Anfield as often as he could. Rob started out at fourth division Crewe, a club that is renowned for its youth set-up. Crewe were promoted to the Third Division in the 1988/89 season as Liverpool conceded the League title to Arsenal. Jones became a firm fixture in Crewe's first team in 1990/91 but unfortunately the Railwaymen were relegated. The highlight of the season was undoubtedly when Crewe met Liverpool in the third round of the League Cup. Crewe took a surprising lead in the eighth minute at Anfield but the Reds responded with five goals. The second leg at Gresty Road finished 4-1 in the favour of the guests. Jones made a pledge to himself that this "wouldn’t be the last time I played on the famous turf." Only a couple of months into the following season Tom Saunders, Liverpool's chief scout, came to watch Crewe's right-back whom manager Dario Gradi had recommended to Souness. The player in question wasn't very impressive but when left-back Jones was moved to the right in the second half, Saunders and Souness saw this speedy player as the solution to their problem. Only 48 hours later Jones was facing Ryan Giggs at Old Trafford and performing admirably. Amazingly roughly four months after playing in the Fourth Division Jones made his England debut versus France at Wembley. It was a dream come true, he won the FA Cup in the spring and was looking forward to playing for England in the 1992 European Championships. But unfortunately it didn't work out as planned. Shin splints caused him to miss the competition and he had to undergo surgery only six games into the following season. But he was only out for six weeks and recaptured his place in the starting line-up on his return.

Rob Jones was undoubtedly Liverpool's most exciting full-back for years, using his skill and speed to cause trouble in opposing ranks. He was included in the PFA Team of the Year in the 1991/92 and 1994/95 seasons. Jones remained in the starting 11 until 1996 when injuries stopped his career again. Jason McAteer was now playing as right-wing back as Evans had switched Jones to the left where he was equally able to perform. Only three days after suffering defeat at the hands of Manchester United in the 1996 FA Cup final, Jones received the worst news possible. He had been suffering from back pains and was diagnosed with a cracked vertebrae and advised to rest from football for at least six months otherwise he could run the risk of ending up in a wheel-chair. He returned at the end of the 1996/97 season and was in and out of the side until February 1998 when he finally seemed to have recaptured his place. Again injuries curtailed his career but this time for good. He had a large swelling in his left knee and had to undergo three major operations to try to fix the problem. By then Houllier had ruled him out of his future plans and Jones was on his way out. He trained with West Ham to get a contract there before the 1999/00 season but he only played in one Intertoto game before the knee started to swell up again. Rob's glorious career finished at only 28.

Jamie Carragher was a big fan of Rob and reflected on what could have been. "I played with Rob Jones a few times and he was a bit unfortunate with injuries and his best form was probably before I got into the team, when he was as good as probably anything in Europe at the time," Carra stated. "He was playing out of his skin and I think if he'd have stayed fit he probably would have gone on to win 70 or 80 caps for England instead of Gary Neville." The manager who signed Jones for the Reds, Graeme Souness, was in no doubt of his qualities. "He has to go down as one of the best, if not the best, signing I made at Liverpool. He should have been a 15-year man for the club because he was good enough to do that. Not many are."

Rob talks to LFChistory.net about the highs and lows of his remarkable playing career.

In Crewe Alexandra's Hall of fame

Jones apologises ... but still gets ban

Jones off as Reds crash

Match report from 01.09.1993 on Coventry - Liverpool from British Soccer Week.

"We are very proud of his achievements and I have to admit he is a better player than I was. He is a lot faster for a start."

"I played with Rob Jones a few times and he was a bit unfortunate with injuries and his best form was probably before I got into the team, when he was as good as probably anything in Europe at the time. He was playing out of his skin and I think if he'd have stayed fit he probably would have gone on to win 70 or 80 caps for England instead of Gary Neville." 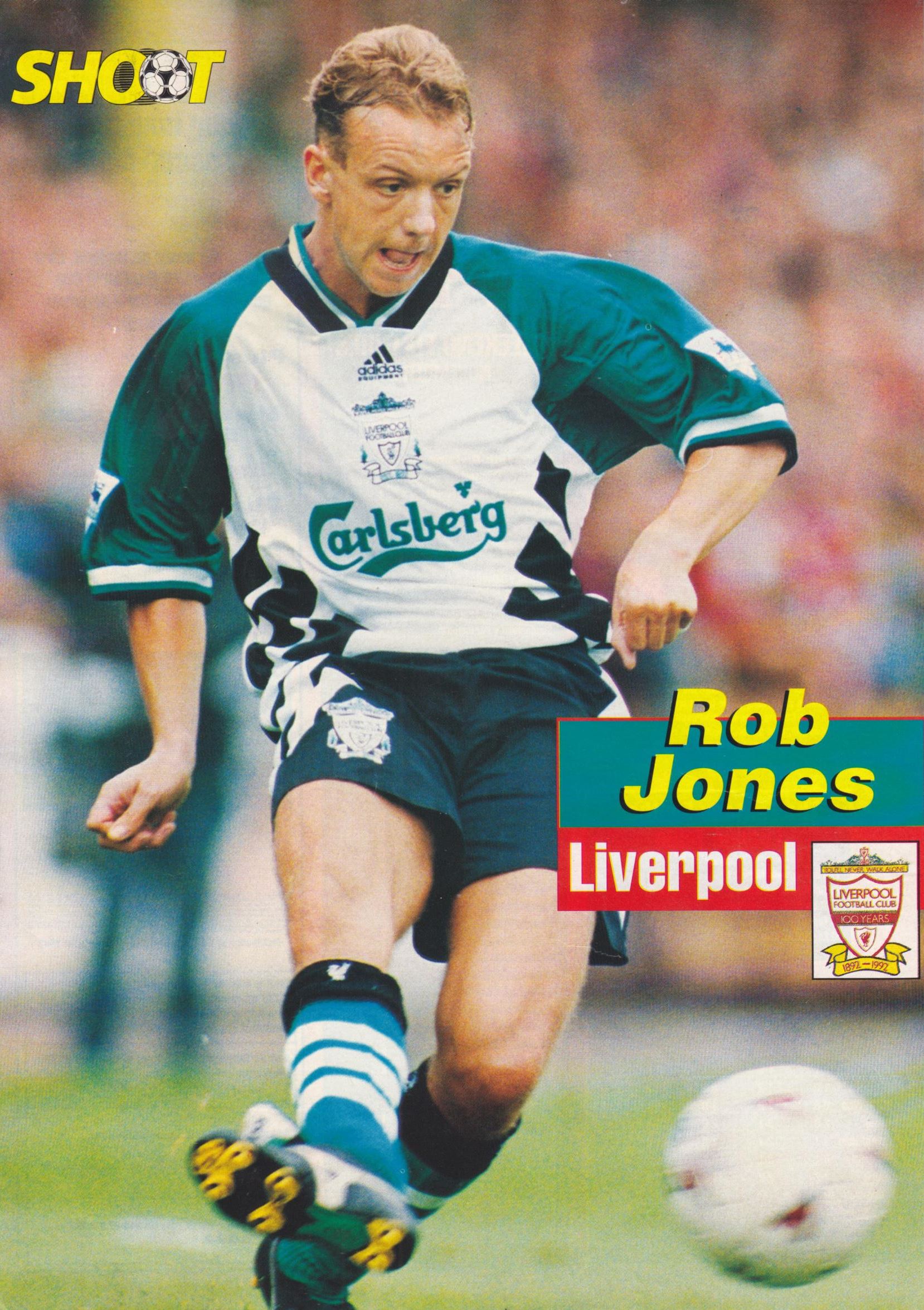 The two rocks of Liverpool defence - 1994 Where are they now? - Bill Jones featured in the Liverpool club magazine