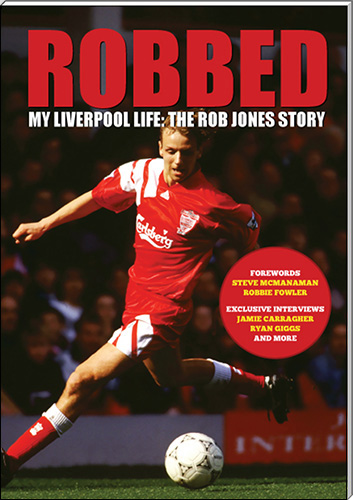 Written in conjunction with Paul Hassall

Rob Jones lived the dream. He was good enough to play football for the club he had supported as a boy. He played for his country too during a meteoric rise to the top of the English game. But his dream turned into a nightmare as persistent injuries forced him to call time on his professional career long before his 30th birthday. Sports journalist Paul Hassall’s excellent book tells the story of a young man who achieved much but could with a little more good fortune have achieved so much more; and how that young man refused to allow the disappointment and despair of having his professional football career cut short destroy him as he embarked on a new path that would see him emerge as a successful businessman in a completely different field.

There are glowing tributes from some of the men whose influence and advice paved the way for Robert Marc Jones to become a professional footballer. But it is also abundantly clear throughout this book how important family was (and still is) to Jones. One man fits easily into both categories: Rob’s grandfather Bill, a man who won a League championship winners’ medal with Liverpool Football Club in 1947 and who was also a member of the first Liverpool team to compete in a Wembley cup final three years later. Even though Bill spoke very little about his Liverpool career, it is obvious that Rob had enormous affection for his grandfather: “I always enjoyed my grandad’s company. There was just something about his presence that felt magical.” That magic ensured that young Robert would grow up to be a Liverpool supporter too. Even during his days as a fledgling professional at Crewe, Rob still travelled to attend home matches at Anfield as often as time and other commitments permitted.

Dario Gradi … “He lives and breathes football”, says Rob … was a huge influence on the young Jones, as he was on so many young players at Crewe Alexandra who were trying to make their way in the game. Despite playing in midfield and despite that being a role he was comfortable with, Gradi told his young starlet: “You’ve got everything you need to play at right-back. That’s your long-term future.” Crewe’s run to the F.A. Youth cup semi-finals in the 1987-88 season attracted a lot of scouts from bigger clubs to their matches. Rob made his League debut for the Alex towards the end of that season, still only 16 years old. His parents still saw it as important that he completed his secondary education but one day they kept him away from school so that he could prepare properly for an away match at Tranmere Rovers. Unfortunately, Rob’s headmaster attended the match, which led to rather an awkward meeting the next day!

In 1990-91 Crewe were paired with Liverpool in the League cup, a draw that filled the 18-year-old defender with huge excitement: “I was going to be facing players I still worshipped from the Kop”. Although a late burst of goals saw a comfortable home win, Jones “made a pledge to myself that this wouldn’t be the last time I played on the famous turf”. Just over a year later that pledge came true. Graeme Souness and Tom Saunders came to watch a Crewe home match but it was Rob who impressed not the defender they had apparently come to take a look at. Souness made his move soon afterwards and not only signed the defender but almost immediately told his new recruit that he would be making his debut against Manchester United at Old Trafford just two days later. Both men explain their thoughts at the time. Souness: “He wasn’t over-excited and didn’t appear too anxious”; Jones: "To be fair to Souness he was taking an enormous gamble by picking me”. Plus the man Rob was directly marking on that debut, Ryan Giggs, said years later with a few hundred Manchester United matches behind him that Jones was the best opponent he had ever faced.

Rob played for Liverpool’s first team nearly 40 times in his debut season, including all nine matches in the F.A. cup, a run that took his new club past his old in the third round and culminated with an F.A. cup winners’ medal against Sunderland at Wembley, a stadium he had already played at after being given his full England debut there by national team manager Graham Taylor a few weeks earlier. 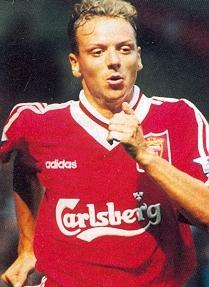 Towards the end of the 1991-92 season Rob started to suffer from the shin problems that would re-emerge with a vengeance later. This caused him to miss the Euro 92 tournament, sadly the first of a number of major tournaments that he would miss out on because of one injury or another. Nineteen months separated his first and second England caps, although he would appear in six of the first seven matches under Graham Taylor’s successor, Terry Venables. But coping with injury now seemed to be part of his daily routine. Rob’s first shin splints surgery came late in 1992, there was a cartilage problem in 1993-94 and both back and knee problems in 1996. He suffered more injury woe in 1997-98 and this reoccurred and required yet more knee surgery in the summer of 1998 and again in 1999 as he tried desperately to cling on to his desire to continue playing, even if it was no longer with Liverpool because whilst Roy Evans kept faith with him for as long as he could, Rob never got the opportunity and/or was never fit enough to show Roy’s successor Gerard Houllier what he could do. Jones was not impressed by the new regime anyway: “It was like being back at school again with a new headmaster who was obsessed with rules and discipline”.

Driving away from Melwood for the last time was a sad and emotional experience but Rob was already excited about an approach from West Ham United, whose manager Harry Redknapp had told him that there was a five-year contract available if he could prove his fitness. Whatever his heart was telling him, his head already knew the reality of the situation: “My knees were now so weak that there was no hope”. So his dream of remaining in the game as a player was over. “It certainly wasn’t where I expected to be at 27” and “I did wonder if the best years of my life were already gone” were just two of the thoughts that went through his mind at the time.

Rob praises many of his Liverpool team-mates of the 1990s for their support and encouragement but reserves special words for the kindness of Steve McManaman, who insisted that Rob come out to spend some time with him in Spain, even though Macca had only recently moved to Real Madrid. Rob’s love for Liverpool Football Club was still alive, even though he candidly admits that “It is hard to judge it like a supporter when you are a part of that dressing-room”. But “Istanbul stands out as the night my love for LFC was rekindled”, his wild celebrations watching at home leading to his children looking on with “curiosity and bewilderment”. It was just the boost he had needed (“All that had been missing was from the inside”) and it wasn’t long before an initial contact from Phil Neal led to him starting to appear for the Liverpool Legends team. But even before this happened, Rob’s second career was already up and running. Frank discussions with his wife Sue led to the birth of the Kids Academy Children’s Day Nurseries at several locations in England, a successful venture which led to interest from the United Arab Emirates and the setting-up of more nurseries out there as well as branching out into care homes back in the U.K.

So this isn’t a sad story. Yes, it is sad that a man with Rob’s ability had to stop playing professionally when he was still so young. But it is inspirational that he managed to turn his disappointment into something so positive that is benefitting so many other lives in a quite different way. Books about footballers aren’t always about medals and glory. Sure, Rob won medals with Liverpool but what comes across as much as anything he achieved on a football field are the qualities that have helped to make Rob Jones the human being … like his determination and resolve to overcome serious injuries as a sportsman and the self-belief and confidence that he could be successful away from sport as well. Rob Jones was a successful footballer but his background and upbringing make it clear that he has always been a guy who would go on to be a successful adult, even if it hasn’t totally been in the way he might have expected when he left school to sign his first professional contract at Crewe Alexandra as a 17-year-old in 1988.

The book can be bought on Amazon, click on the link below.