James was considered one of England's best and brightest goalkeepers when he was establishing himself at Watford. Arriving at Liverpool only 21 years of age he vowed to become the club's first-choice 'keeper and England's as well inside two years. James didn't start his Liverpool career very promisingly and critics were happy to write him off after failing at the first hurdle. Grobbelaar recaptured his place but even with him out later through illness Mike Hooper was preferred to James in the 1992/93 season. Before the season was out though James was again handed the number one jersey. James had to settle for bench duty the following season until 19 February 1994 when Grobbelaar got injured. From that point on James made 213 consecutive appearances until Brad Friedel took his place on 28 February 1998. James got back into the side in the 1998/99 season but that turned out to be his last at Liverpool.

James was too prone to make mistakes but that was a fact that Liverpool's fans had grown quite accustomed to after watching Grobbelaar's wild antics. But unlike the past Liverpool were not winning each game despite the goalkeeper's errors and when James made a mistake it was the reason behind Liverpool's defeat that particular evening. Contrary to people's expectations James seemed to become less confident as the years passed by even earning the nickname "Calamity James" and one high pass into the penalty area was basically what was needed because the opposition knew he would have trouble controlling it. James once attributed his lack of concentration to playing Nintendo games long into the night!

Despite his Liverpool career having its ups and downs James had has a very successful career with a number of clubs and a healthy number of international caps to his name. On 14 February 2009 he achieved the all-time Premier League appearance record with 536 appearances, overtaking Gary Speed. He held the record until Ryan Giggs broke it in 2011. James won the FA Cup with Pompey in 2008 which proved third time lucky as he had lost with Liverpool in the 1996 final to a late Eric Cantona goal and Aston Villa in 2000. James reached the cup final again with Portsmouth in 2010 but he was denied a winners' medal for the third time. Pompey were relegated at the end of the season after finishing well clear at the bottom of the table. After being part of every season of the Premier League since its inception in the 1992/93, James moved to Bristol City in the Championship for the 2010/11 season. After appearing regularly in the Championship for a couple of years the 41-year-old goalkeeper was released at the end of 2011/12. Towards the end of September 2012 having passed his forty-second birthday James joined his eighth different English League club when he signed for AFC Bournemouth until the end of the 2012/13 season. In April 2013 James signed on as player-coach of Iceland's IBV Vestmannaeyjar where his former Portsmouth team-mate Hermann Hreiðarsson was manager. James played twenty-three times for ÍBV during the Icelandic season of 2013 and announced his retirement as a player as soon as that season was over. James didn't stay retired for long as he was appointed player-boss of Kerala Blasters in the inaugural Indian Super League in the summer of 2014. Kerala reached the final of the Indian Super League where James played in goal in their 1-0 defeat by Atlético de Kolkata in Mumbai.

James picks up the challenge

I cried. For the first time, I cried

Is there a worse feeling in football than losing a Cup final? Not for the man who kept goal for Liverpool in 1996 and Villa in 2000. He has the scars - but not the medals - to prove it.

An article from Liverpool Super magazine in 1994.

Various reports from The Daily Telegraph, Press Association and The Daily Express

If you thought trainspotters were weird ... try footballers

"I have taken stock of what I am about. The problem in the past was that everything was taken for granted. A lot of people believed I was capable of becoming England's number one and I took it for granted that I was going to do that without having to do the hard stuff which was working at it. "The worst point was the 'Calamity James' time of my career when I was 26-27 and I was trying to equate how I would be able to get back into the England team. The move to Aston Villa was the right move at the right time." 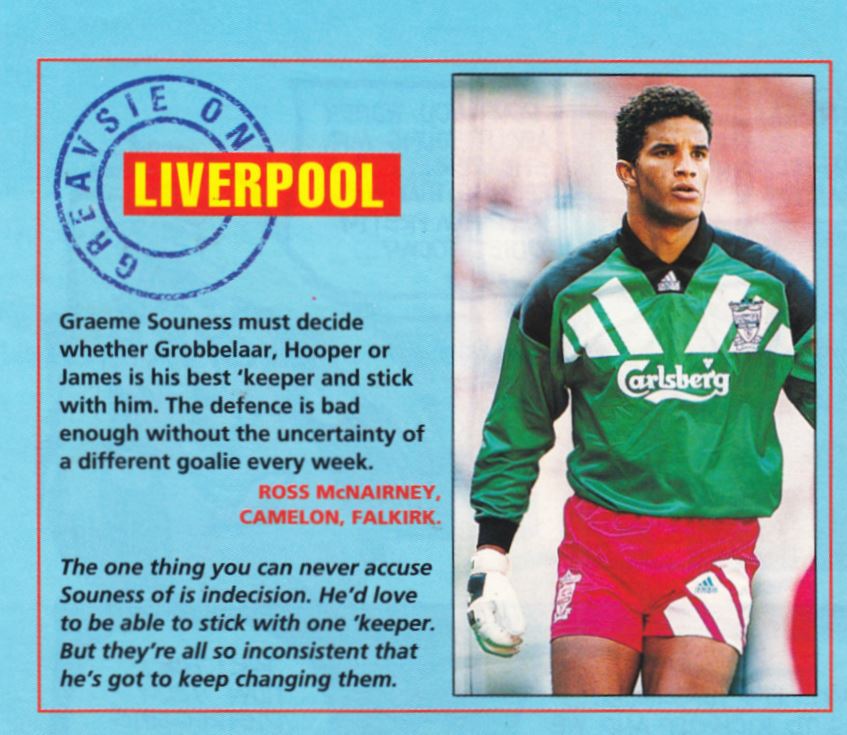 Souness must decide on his main keeper - 1993