Beardsley established himself at third division Carlisle United in the 1979/80 having been rejected by Newcastle as well as a host of other clubs that didn't believe in the talents of this quiet and unassuming lad. In February 1981 he was presented with a £250 cheque by Jackie Charlton for winning the North East's Most Promising Newcomer trophy, in a competition organised by the Evening Chronicle. Beardsley made an audacious move to Canadian Vancouver Whitecaps where he impressed Manchester United manager Ron Atkinson in a friendly in Canada and joined United in September 1982. He only featured in a single League Cup game before moving back to the Whitecaps after six months. In September 1983 22-year-old Beardsley was on the move again, this time to his hometown club, Newcastle United, for only £150,000 which is arguably the best business the North-East club has ever done! Kevin Keegan's leadership in his final season as a player, inspired Chris Waddle and Beardsley to greater heights and the diminutive forward scored 20 goals as Newcastle were promoted to the First Division after a six-year absence. The Magpies remained in the lower half of the top-flight during the rest of Beardsley's tenure at the club.

Beardsley's international career blossomed in the World Cup in Mexico in 1986 when he eventually started in England's third game of the finals against Poland after the team had struggled for goals in its first two games. He had only made his international debut five months earlier. Beardsley was a perfect partner for goalscorer supreme Gary Lineker who scored a hat-trick against the Poles. Paraguay was beaten 3-0 in the following game with a Lineker brace and a Beardsley goal. England finally succumbed in the quarter-finals to a Maradona double. Beardsley also featured in the disastrous 1988 European Championships and in the 1990 World Cup finals in which England lost to West-Germany in the semi-finals.

In 1987 Beardsley had twelve months of his contract to run and manager Willie McFaul said unless he signed a new three-year deal the club was ready to let him go. Liverpool had sold Ian Rush to Juventus for £3.2million and wanted to spend more than half of that on the Geordie. "Kenny was the one who told me to ask for more money when I was ­negotiating my move to Liverpool. I was going to ask for less than I eventually got. He told me I was the club's record signing at the time and so I should be asking for wages that reflected that. I would do anything for that man. The man is a genius." Beardsley terms with Liverpool inside an hour and the club paid a British record fee of £1.9million for his services.

The Reds destroyed the opposition with the attacking trio of Barnes, Beardsley and Aldridge in the 1987/88 season going 29 games unbeaten on their way to the title which Liverpool clinched with Beardsley's goal at Anfield against Spurs with four rounds to go. Beardsley, who had by his own admittance struggled and felt like an "expensive passenger" for the first half of the season, had scored 18 goals in 48 appearances by his debut campaign's end and earned rave reviews. He was a true wizard with the ball and his dip of the shoulder to fool the opposition became a favourite among the fans. In the 1988/89 season, Beardsley contributed 12 goals but a final-day 2-0 defeat to Arsenal robbed the Reds of the title a few weeks after the Hillsborough tragedy. The League Championship was reclaimed in 1989/90 with Beardsley playing an important role but he missed the last seven matches of the season due to a stress fracture of the knee diagnosed following the astounding 4-3 defeat to Crystal Palace in the FA Cup semi-finals. The genial Geordie was taken by surprise in the summer when Dalglish told him that Marseille had made a £3.6million offer for his services. Beardsley was concerned because he felt Liverpool were ready to do business but he didn't want to uproot his young family.

Beardsley was dropped on occasion and substituted once too often for his own liking in the 1990/91 season but he didn't let his standards drop and kept his disappointment to himself. He made the ideal start to the season by scoring the winner against Arsenal in the Charity Shield. He scored a memorable hat-trick against Manchester United at Anfield on 16 September and a brace at Goodison Park six days later. Beardsley was out for six weeks after he tore ligaments in his ankle in Steve McManaman's senior debut against Sheffield United on 15 December 1990. He had been a substitute four games running when he was finally back into the starting line-up following his injury and scored two goals in a thrilling 4-4 FA Cup draw at Goodison Park which turned out to be Dalglish's final game as manager in his first spell at the club. Rumours of a great rift between Kenny and Beardsley in the 1990/91 season were later put to rest: "I never fell out with Kenny other than being devastated at being left out of the team," Beardsley said in 1999. "Kenny is a good friend. I got involved in his wife Marina's charity last year, we played in a charity game together against Celtic and Kenny played in my testimonial. If I had any problem with him I wouldn't have invited him. It is wrong for people to say we fell out."

Graeme Souness took over and it soon became apparent Beardsley wasn't to his likingþ Souness spent a then-record £2.9million fee on Dean Saunders from Derby County in July 1991 which prompted Everton, who intended to sign Saunders, to go for their second choice, Peter Beardsley, for one-third of Saunders' fee. Everton cherished Beardsley for two years where he played 95 games and scored 32 goals and proved that Liverpool sure could have used his talents in Souness' regime. A personal highlight for Beardsley was when he returned to Anfield for his first game in a Blues' shirt on 31 August 1991: "Just before the game the Kop chanted my name and I don't suppose that's happened too many times, an Everton player getting his name chanted by the Kop. But during the game, with Liverpool winning, the crowd started to chant, 'What a waste of talent!' The Kop a bit special to me on that day and I won't ever forget it."

In July 1993 Beardsley rejoined his beloved Newcastle where manager Kevin Keegan was a big admirer of his considerable talents. Newcastle had just been promoted to the Premier League after winning the First Division. Beardsley played brilliantly and scored 25 goals in all competitions to go along with Andy Cole's 41 as the Magpies finished third. Newcastle finished sixth the following year and pipped to the title by Manchester United after dropping a twelve-point lead in the 1995/96 season. Beardsley's disappointment was made even greater when he was axed from England's European Championship squad. Dalglish took over at Newcastle mid-season and the club had to settle again for second best in the League. Beardsley brought his second spell at St James' Park to an end in August 1997, at 36 years of age, having added 157 games and 56 goals to bring his total for Newcastle to 321 games and 117 goals.

Beardsley went from one club to another desperate to lengthen his career even rejoining Keegan at Fulham but after a single season at Hartlepool United during which he just escaped the drop to the Conference, he ended his sensational League career. Beardsley was awarded a testimonial by Newcastle in January 1999. He has been part of Newcastle's coaching staff in two spells and was promoted to reserve team coach in July 2010. In October 2011 Beardsley was appointed as development manager at Newcastle having signed a five-year deal in a role that will see him help drive recruitment on a global, local and national scale and fly the flag for the Magpies around the world. He went on to manage their under 23 but after being suspended for a year on allegations of bullying, his contract was terminated in March 2019 without any further explanation.

Beardsley enjoying a new lease of life (The Daily Telegraph)

Tears of a crowd for Beardsley

Article published in the Mirror. Newcastle and Celtic played a testimonial for Peter Beardsley on 27 January 1999.

The day the magic walked out of Anfield

Peter Beardsley tells Andy Hunter he did not cause Kenny Dalglish's shock 1991 departure. Published on 25 January 1999.

An article on 19th of October 2007 by Chris Beesley, Liverpool Daily Post.

Peter Beardsley was bought for a British record fee in 1987.

King Cole on a roll

Match report from 21.11.1993 on Newcastle - Liverpool from British Soccer Week.

"I could have signed for Newcastle when I was 17, but I decided I would be better off at Carlisle. I'd had a drink that night"

"There was no way I would have asked to leave Liverpool, I was really enjoying my time there but Souness wanted me out."

"He's already just about the best player in England at the moment. Add 20 goals a season at Liverpool and he will become a megastar... a name to bracket alongside Maradona and Cruyff. Beardsley is a bargain at £2 Million. He's not at his best yet, but he's going to come to his peak in the next three or four years. But what he needs to work on now is to score more goals. That's the only part of his game that needs improving. He's got everything else. He's a little wizard." 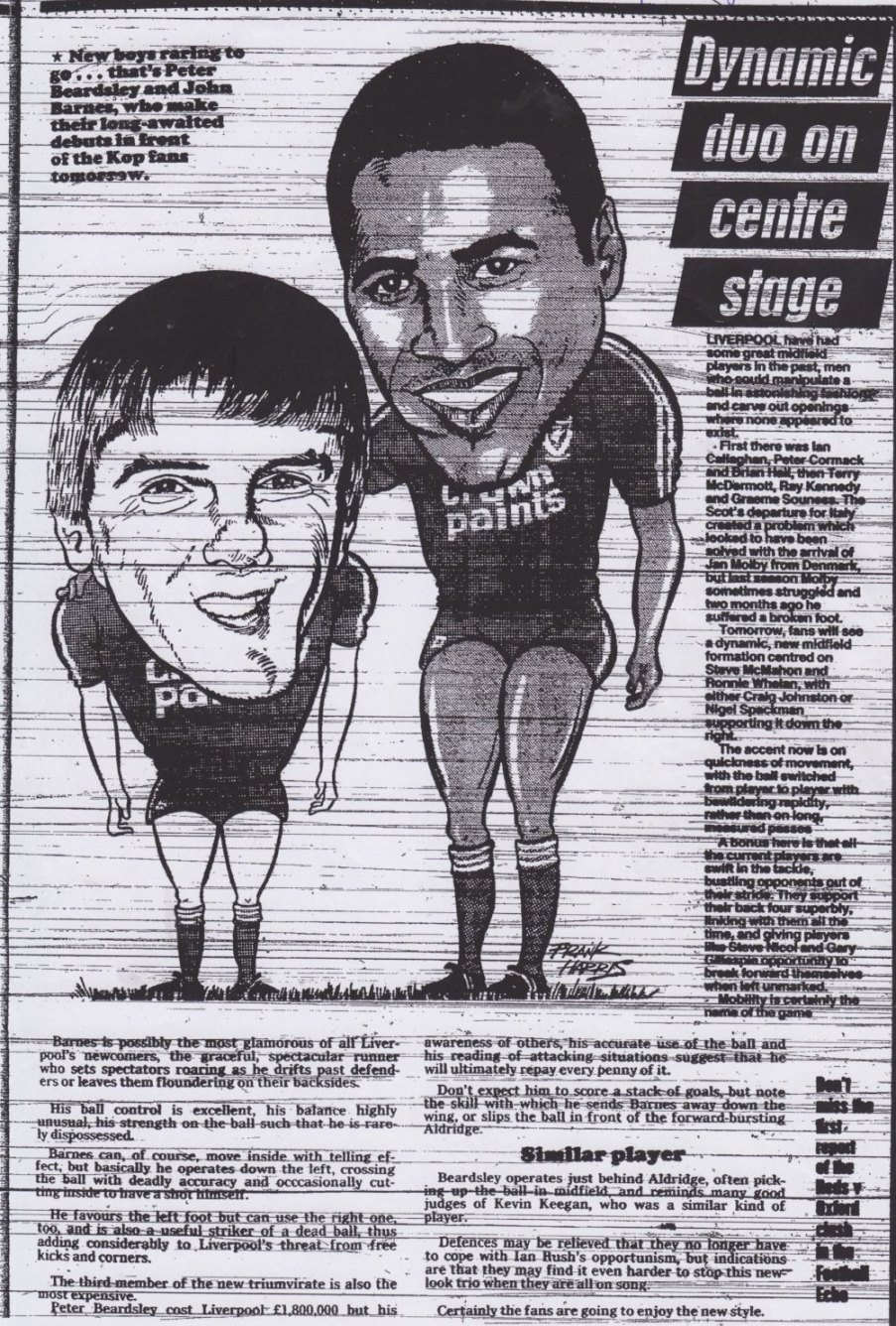 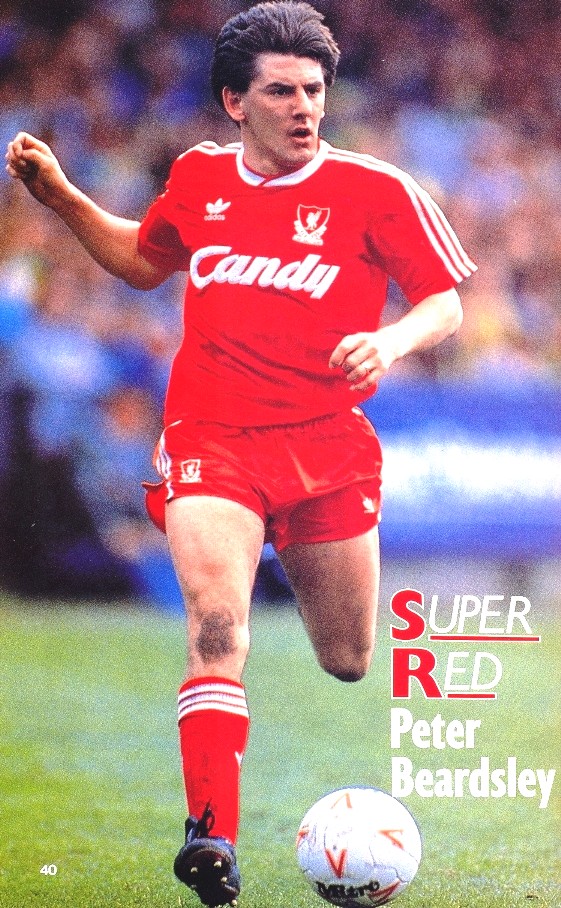 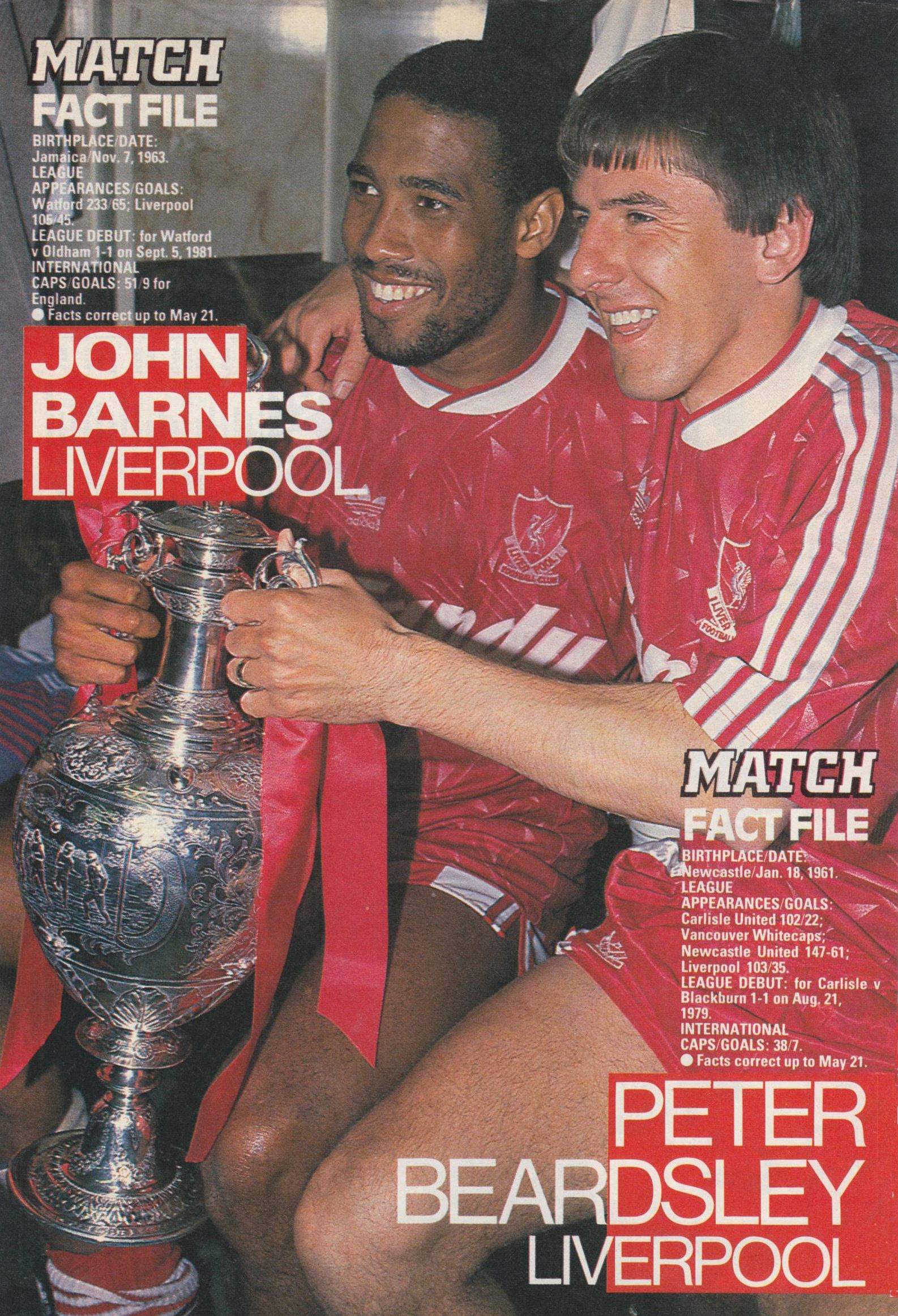 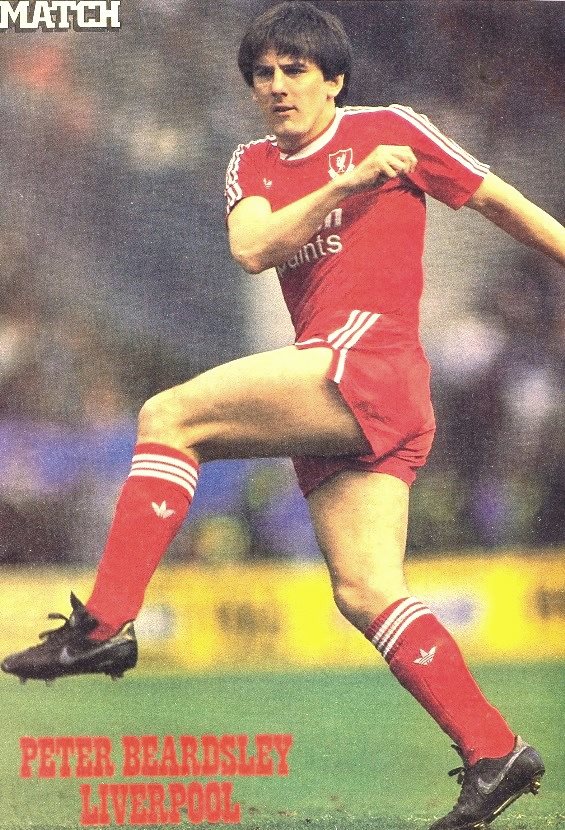 Peter Beardsley on the cover of Shoot! as an England player 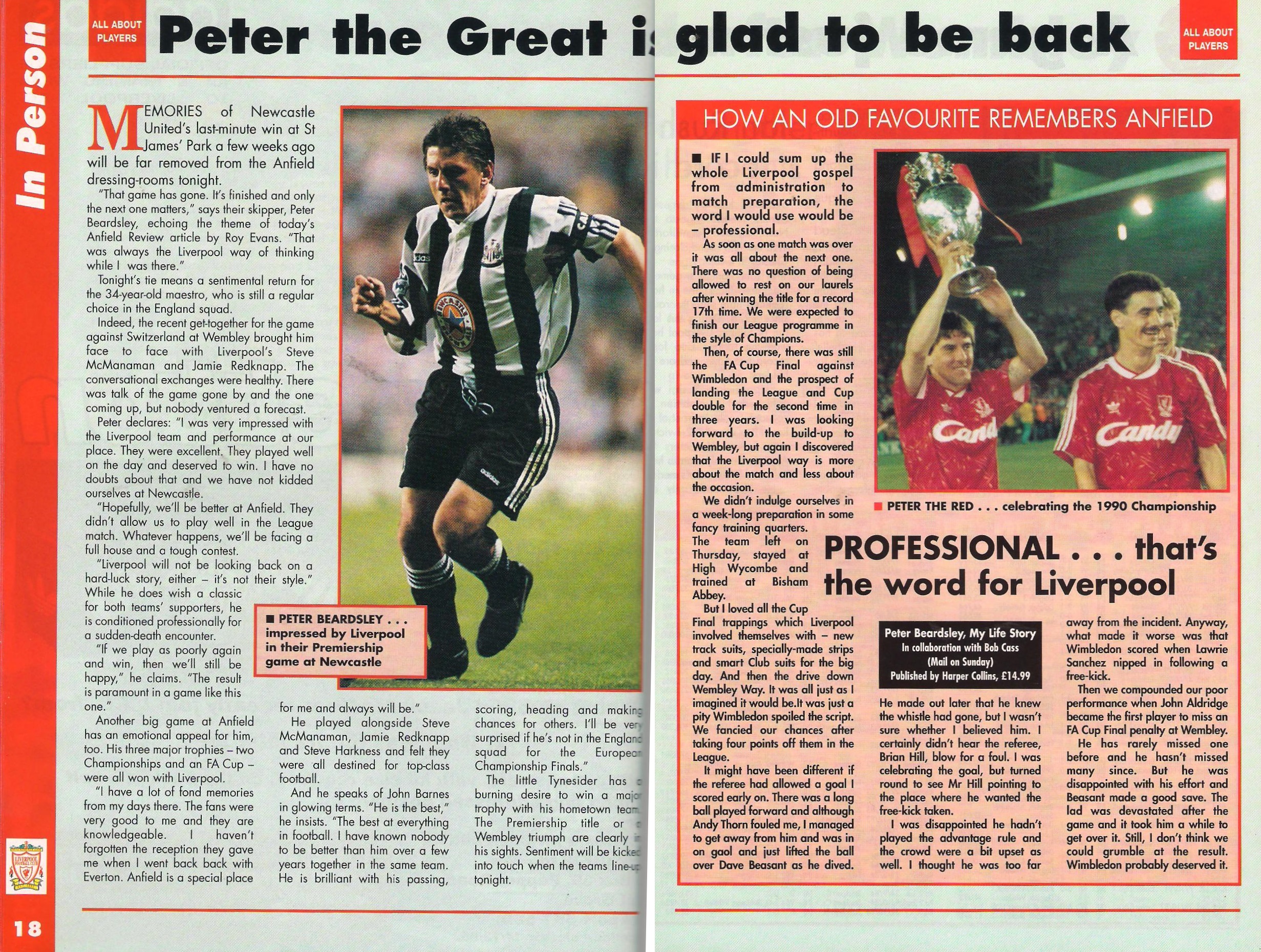 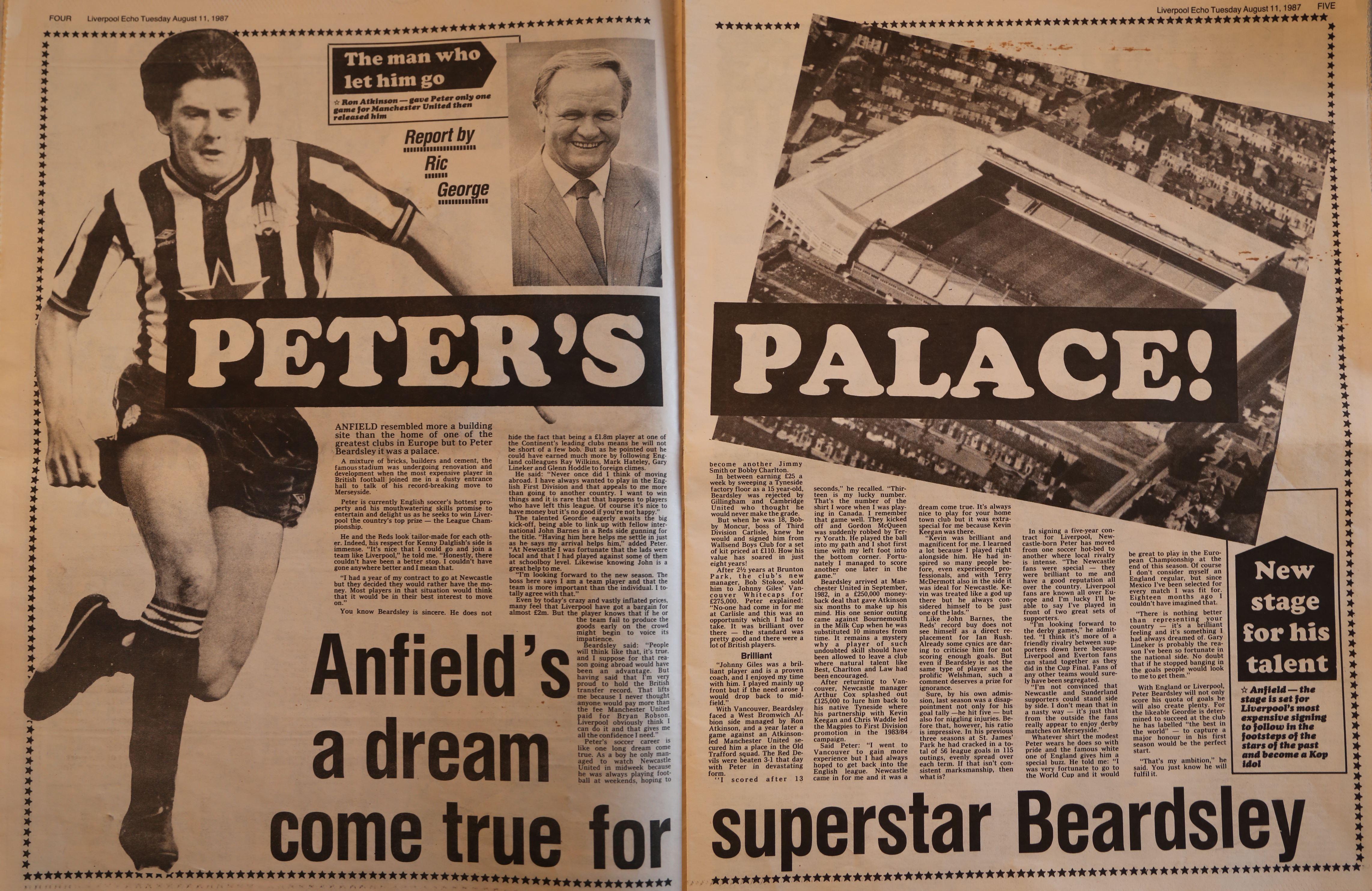 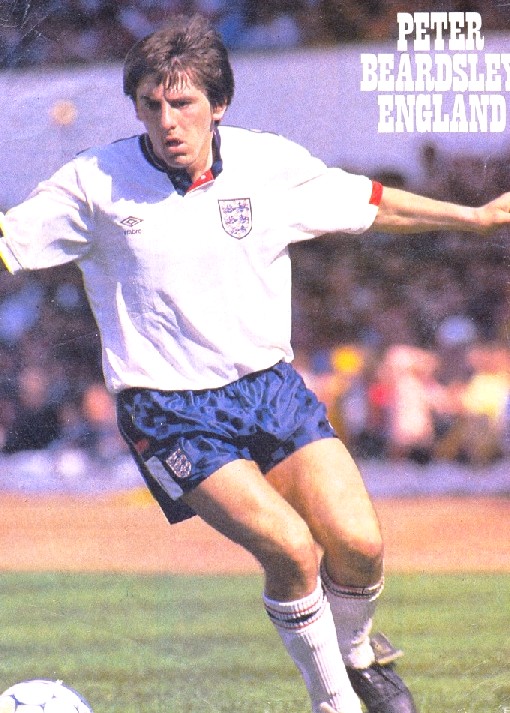 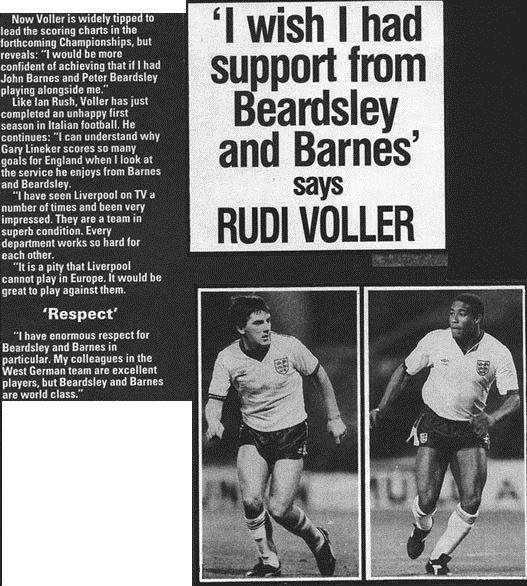 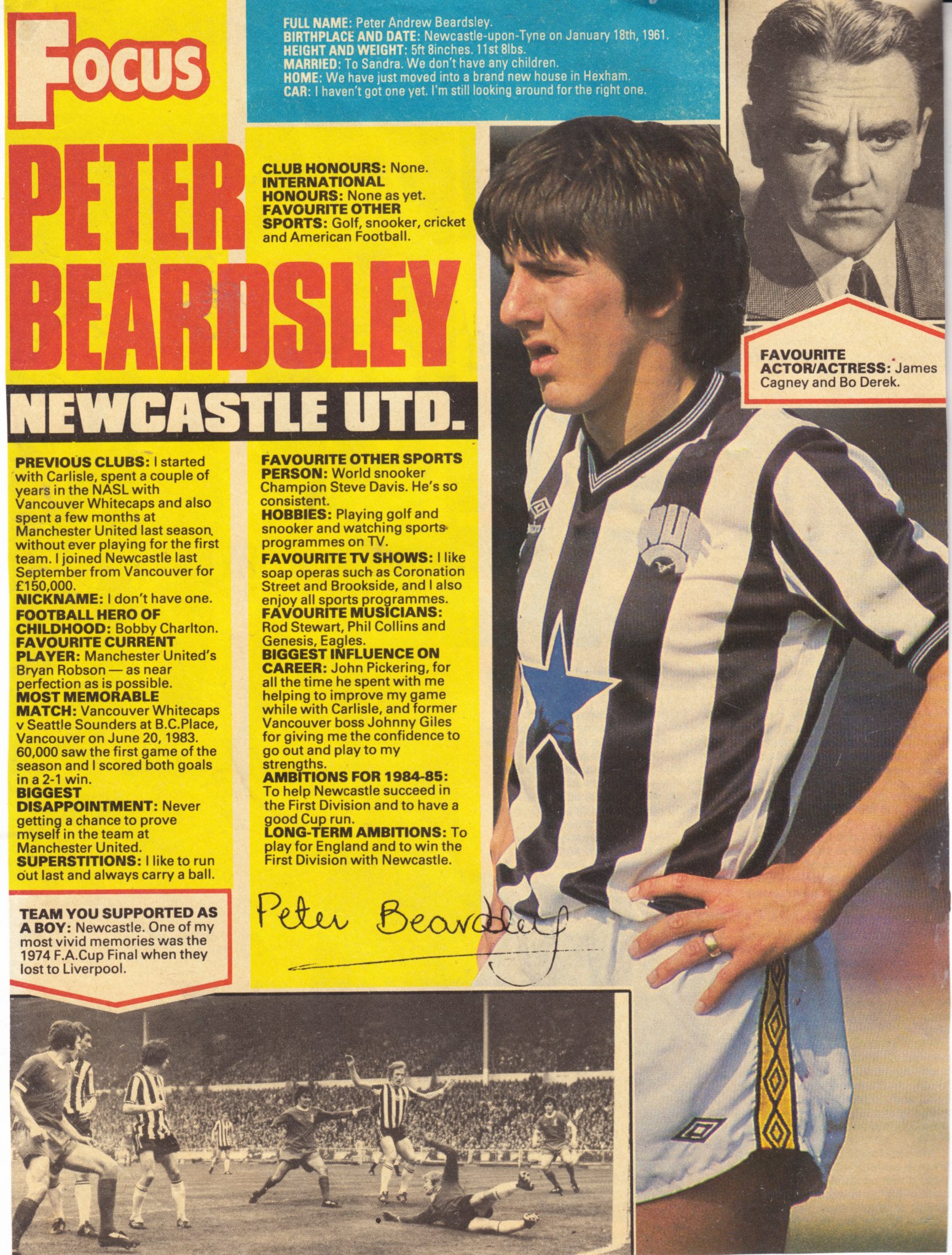 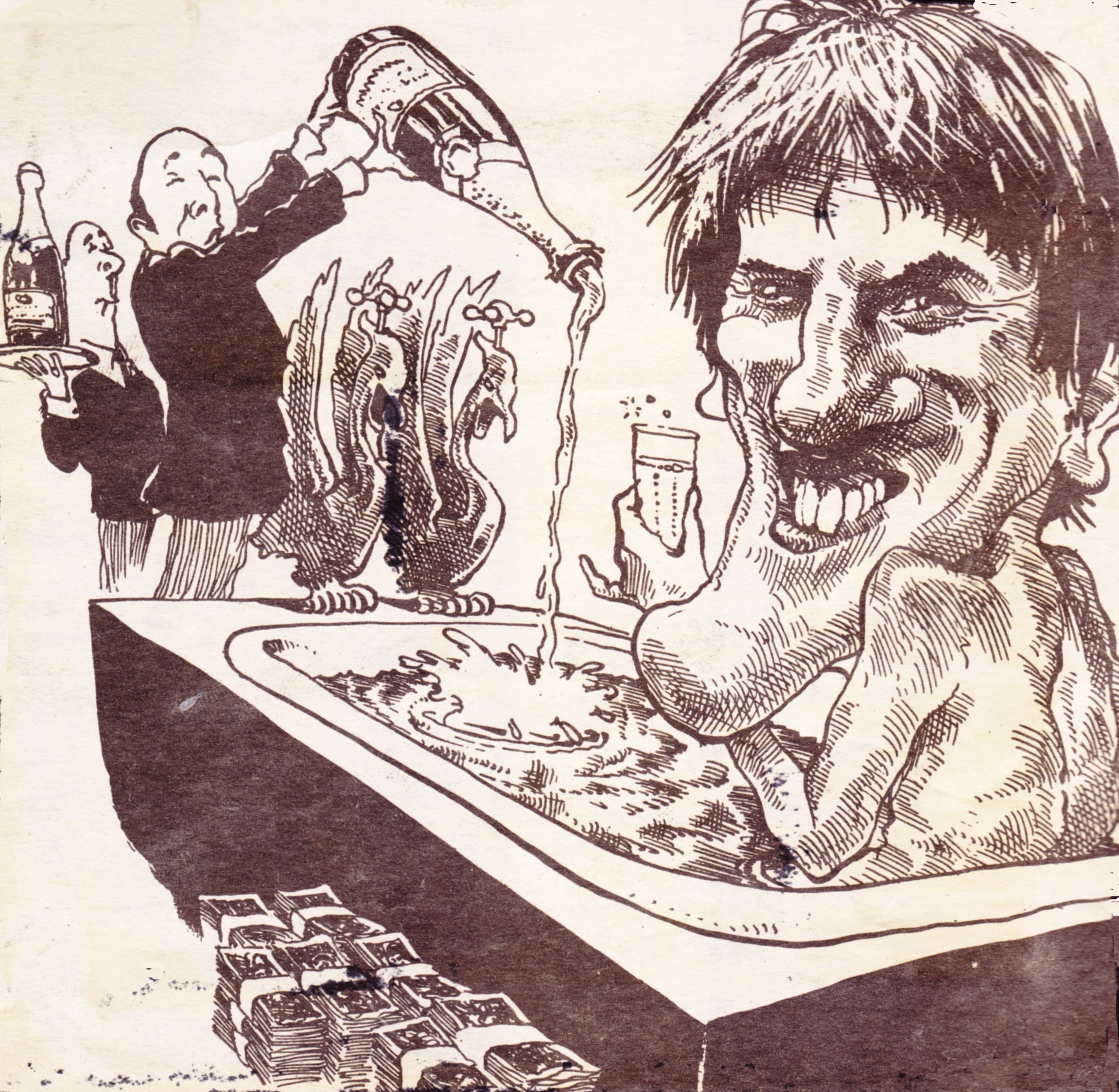 Sketch of the most expensive player in Britain 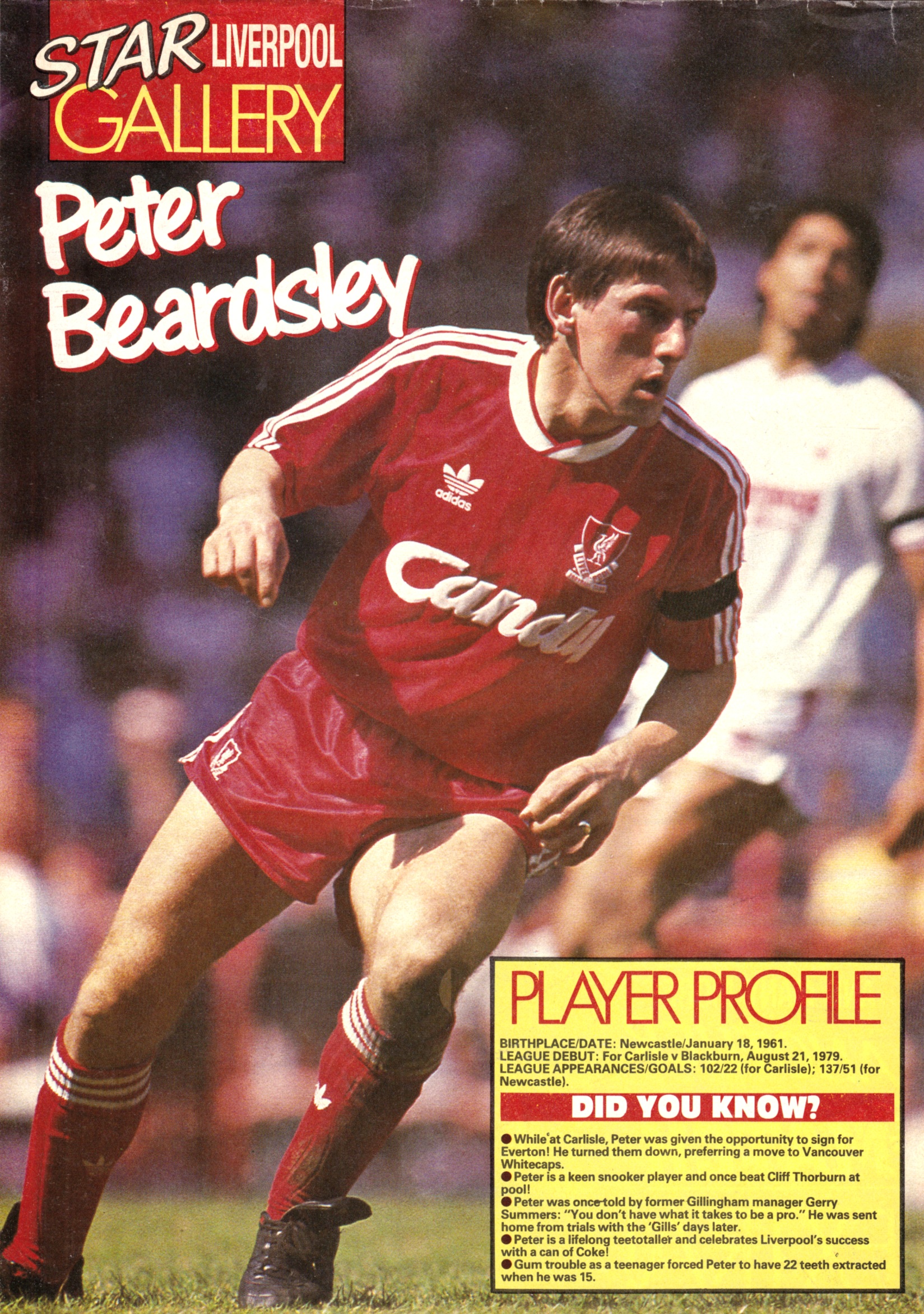 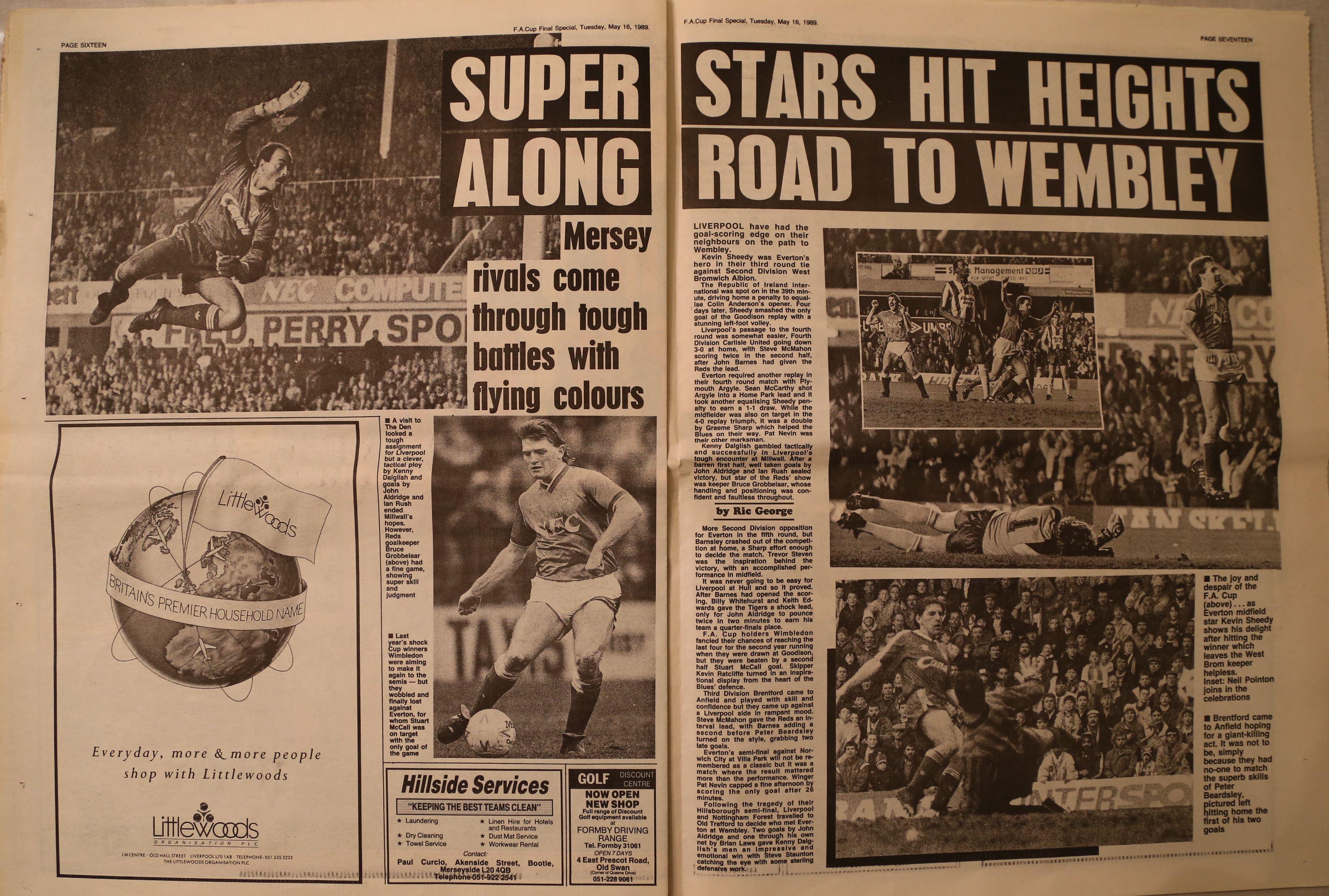 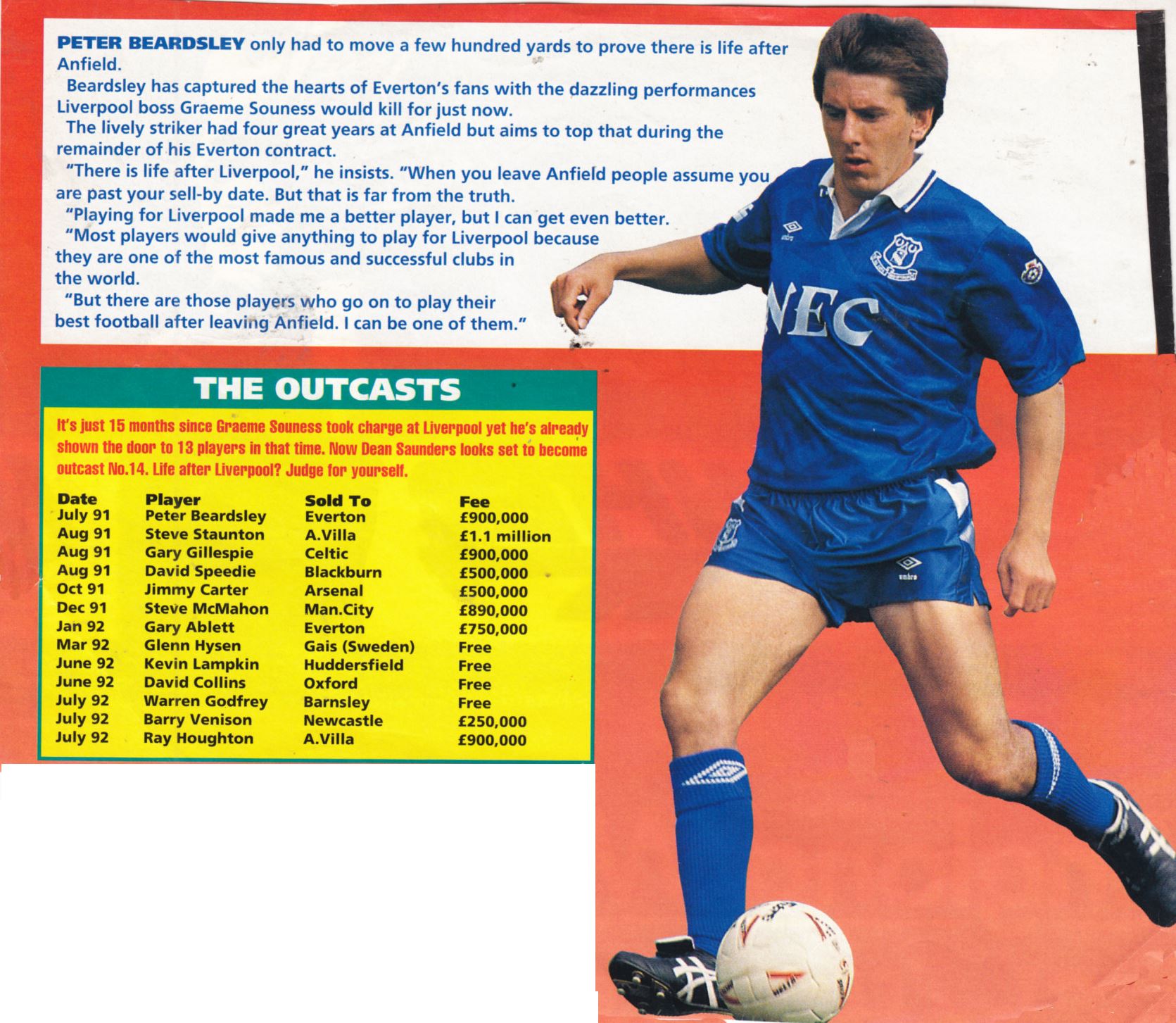 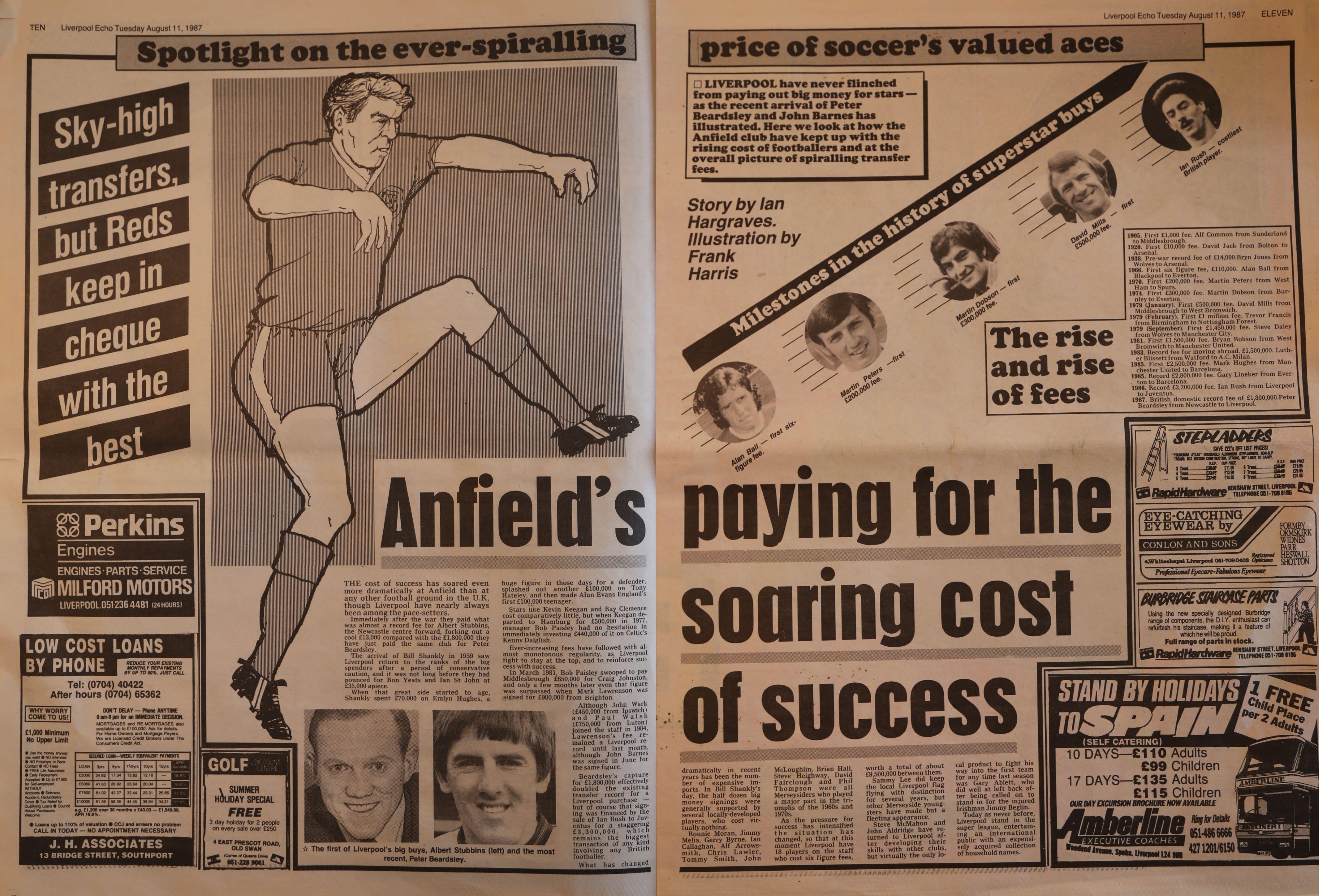 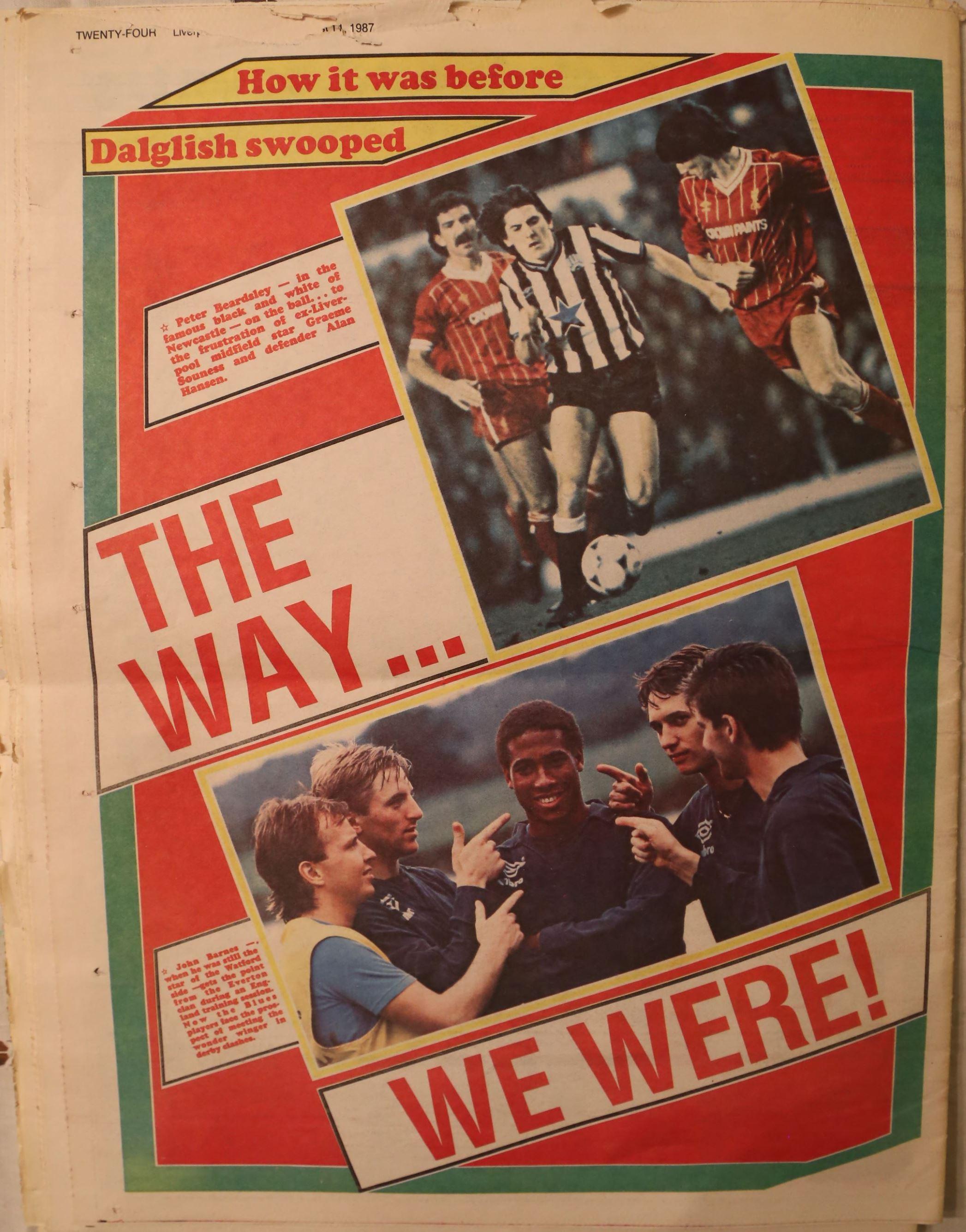 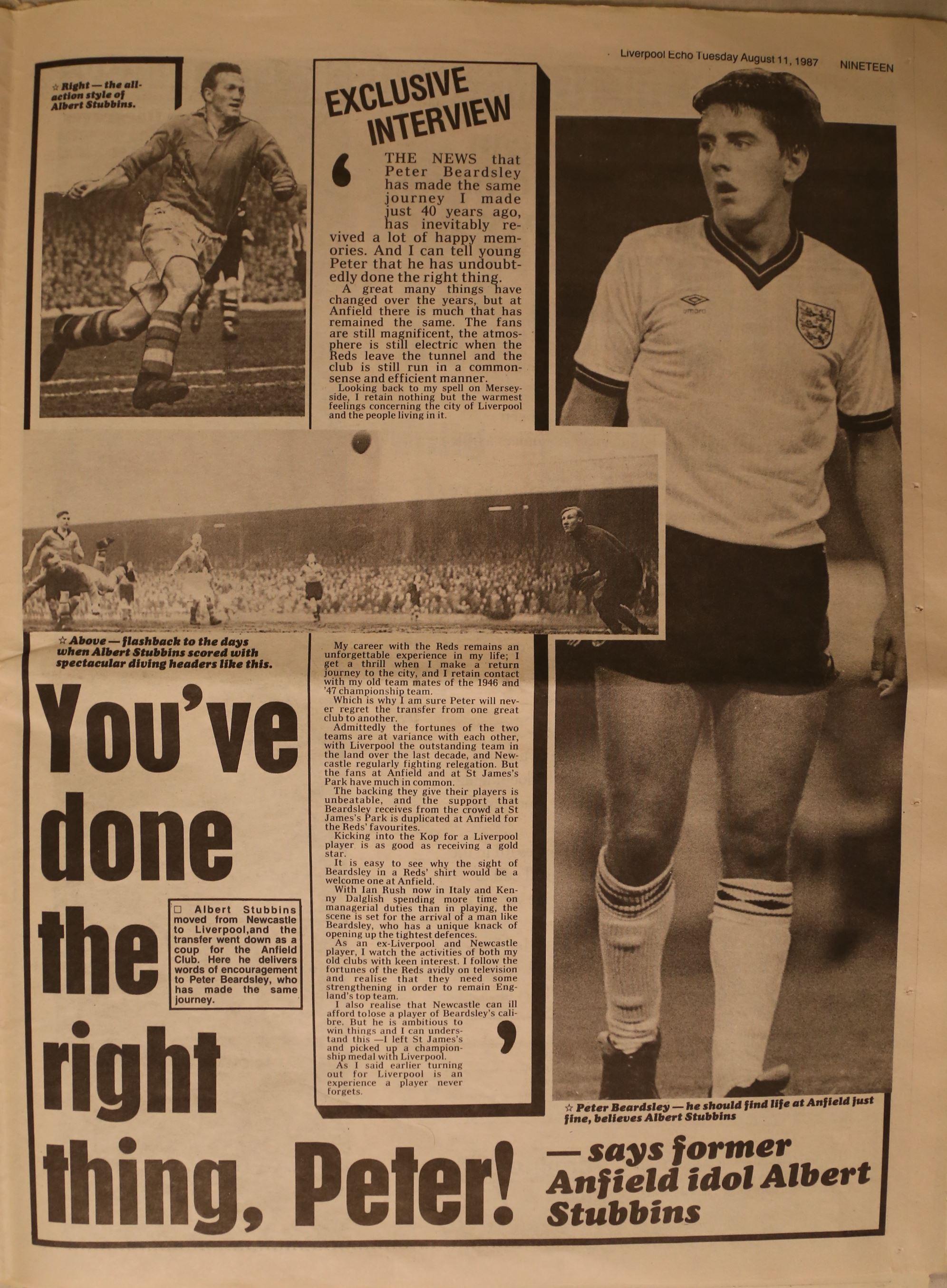