Once upon a time, Liverpool had the luxury of dropping 30 goals-a-season strikers. "Aldo" was an exceptional header of the ball and a master of link-up play. He would receive the ball with his back to the opposition, feed it into the right channels and make his way to the box where he was deadly. Aldridge was a fervent Liverpool fan from a very early age and must have thought his chance of playing for his boyhood heroes had passed him by as he plied his trade with Newport County and Oxford United. But the imminent departure of Ian Rush to Juventus meant that Kenny Dalglish needed to strengthen his attacking force and Aldridge needed no second invitation when he finally made his 'dream move' to Anfield early in 1987 at the age of 28. Aldridge had already scored 15 goals in 25 matches that season for Oxford but after joining Liverpool he only added two goals to his total for this campaign. Perhaps not surprising as he came on as a substitute in all but two of his ten appearances for the Reds in 1986/87. Dalglish didn't seem too keen on using him but told Aldridge not to worry, his time would come when Rush had left and other players who complimented him better had arrived. A few months later, John Barnes and Peter Beardsley came to Liverpool.

Aldridge took over the responsibility of leading the attack with devastating effect, scoring in each of the first nine league matches in the 1987/88 season. He had scored also scored in the last League game of the previous season and his club record of scoring in ten consecutive League games still stands. Rush was in no doubt after watching his successor in action in October 1987 that he was the right man for the job: "I always felt that John was the main man to take over from me. He is scoring goals at a faster rate than I ever did, and Liverpool looks a better side than they did last year. There are not many strikers around like John, and by playing with wingers they have so many more options this season." Normally so reliable from 12 yards, Aldridge sadly became the first player to miss a penalty in an FA Cup final at Wembley when Liverpool denied the League and Cup double by Wimbledon in 1988. He got the surprise of his life when Rush returned after only one season at Juventus and now Kenny had to accommodate both of them in the same team. Aldridge continued to score in the 1988/89 season and added 31 goals to his tally. He made amends for his penalty miss at Wembley when he scored with his first touch against Everton in the fourth minute and added an FA Cup winners' medal to his trophy cabinet as Liverpool beat their neighbours 3-2 after extra-time. He thereby completed his domestic set of honours as he had already won the League Cup as an Oxford player in 1986.

Rush had scored the other two goals in the FA Cup final against Everton and when he had finally reached full fitness at the start of the 1989/90 season it became apparent that Kenny would prefer his old striking partner to Aldridge. With a move to Real Sociedad looming he was allowed to come off the bench when a penalty was awarded in the 9-0 massacre of Crystal Palace on 12 September 1989. Peter Beardsley graciously made way for Aldridge who tucked the spot-kick away with efficiency and threw his shirt and boots into the Kop at the end of an emotional farewell appearance.

The Scouser became the first non-Basque player to sign for Real Sociedad and was a hit with the fans scoring in more than every other game. However, he wanted a return home and after two successful seasons, he joined Tranmere Rovers who had just been promoted to the old Second Division. Aldridge scored a club-record 40 goals in his debut season including nine in his first five games for Rovers. He was top-scorer at the club in his five other seasons as well as being the manager of the club in his last two seasons as a player. When he finally called it a day he did so in style scoring Rovers' both goals in a 2-1 win over Wolves at the age of 39 years and 228 days! Aldridge was the club's manager from 12 April 1996 - 17 March 2001. He kept Rovers mid-table in the First Division and Rovers went all the way to Wembley in the 2000 League Cup final in which they lost to Leicester City. Six days after Liverpool knocked Tranmere out of the quarter-finals of the FA Cup with the club destined for the drop into the Second Division Aldridge resigned as manager.

Aldridge's international goalscoring record makes less impressive reading as he didn't score for Ireland until in his twentieth game against Tunisia on 19 October 1988. After he had broken his duck he netted 18 times in 49 matches. His most famous moment in an Ireland shirt was perhaps his rant at match officials when Ireland was trailing 2-0 to Mexico in the 1994 World Cup. A player had already been substituted but Aldridge had to wait six minutes to come on in his place and was not all pleased and his outburst was heard by millions of TV viewers. Aldridge finally made it on and grabbed a consolation goal which ensured Ireland's progress into the second round on goal difference and endeared him to the Irish and Scousers worldwide as his rant was delivered in the thickest Scouse accent imaginable.

Aldo was a true goalscoring wizard and it didn't matter where he was playing, the goals kept coming. His astounding career stats are 476 goals in 889 matches.

John Aldridge is being unfairly written out of history

John Nicholson's tribute to Aldo on the Football 365 website.

LFChistory.net caught up with Aldo to have a quick chat on his colorful career at Liverpool.

A great interview with John Aldridge. Those who are easily offended, beware!

John Aldridge had a broken hand the day he signed in at Liverpool.

"I got a letter which basically said 'We know where you live, we know where you go and we are going to get you. It does give you a fright. Obviously the police were informed, the letter was passed on to forensics and it was a worrying time. Thankfully nothing ever came of it."

"Kenny Dalglish knew his players. We never even had any set pieces really. He just went out and said 'Go and beat them'. We never worked on patterns of play, which people would be amazed at now."

"I wouldn't describe it as an altogether happy memory for me because I was leaving the club I loved – and the club I had always dreamt of playing for – but to get the chance to score at the Kop end in my last game was special. It was a very poignant moment for me. Everyone knew I didn't want to leave. I'd have stayed there for the rest of my career if I could and I told Kenny I wouldn't go if he'd give me a chance. But he made it clear that Ian Rush and Peter Beardsley were his preferred front two and so, with a World Cup coming up the following summer, I realized I couldn't hang around and just sit on the bench.

I remember when we got the penalty against Palace and the Kop suddenly started singing my name. They clearly wanted me to come on to take it and I was a bit surprised when Kenny went along with their wishes. If I had to leave the club then this was the best way to do it, scoring a goal at the Kop end and having the crowd show their appreciation for what I had given the club over the years. At the end of the game I was all over the place emotionally and it's really difficult to put into words exactly how I was feeling at that time. It was a real mix of emotions, that's for sure."

The City's cultural ambassador to World Cup 94. Forget all the goals, forget that he's a Kopite who played like it when he wore a red shirt, this was his moment. With his entry as a substitute for Ireland delayed by an over-officious flunky, Aldo game him a piece of his mind which was beamed across the world by a dozy television director. The expletive-ridden rant in the thickest Scouse was one of the great comedy moments of all time. A whole generation of kids across the world were traumatised. I know he wasn't playing for Liverpool at the time but what you've got to understand is that Aldo will always be one of us. Fact.

I’d settle right now on being just half the player Rushie was at Anfield. And if people give me that kind of recognition when my Liverpool career is over, I’ll remember it as the greatest compliment of my life. Obviously I’d love to be as good as he is, but I can’t get anywhere near him. Nobody can. Granted there is a similarity in the way we look, but that is where the similarity ends. 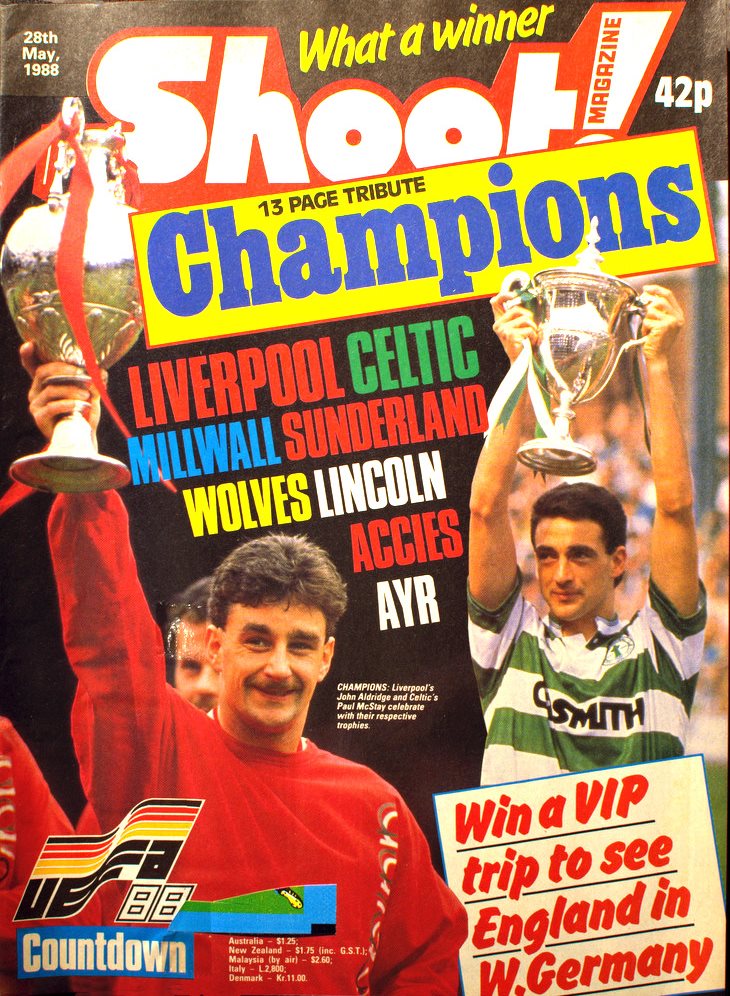 Aldridge and his fellow league champions celebrated on the cover of Shoot! 28 May 1988 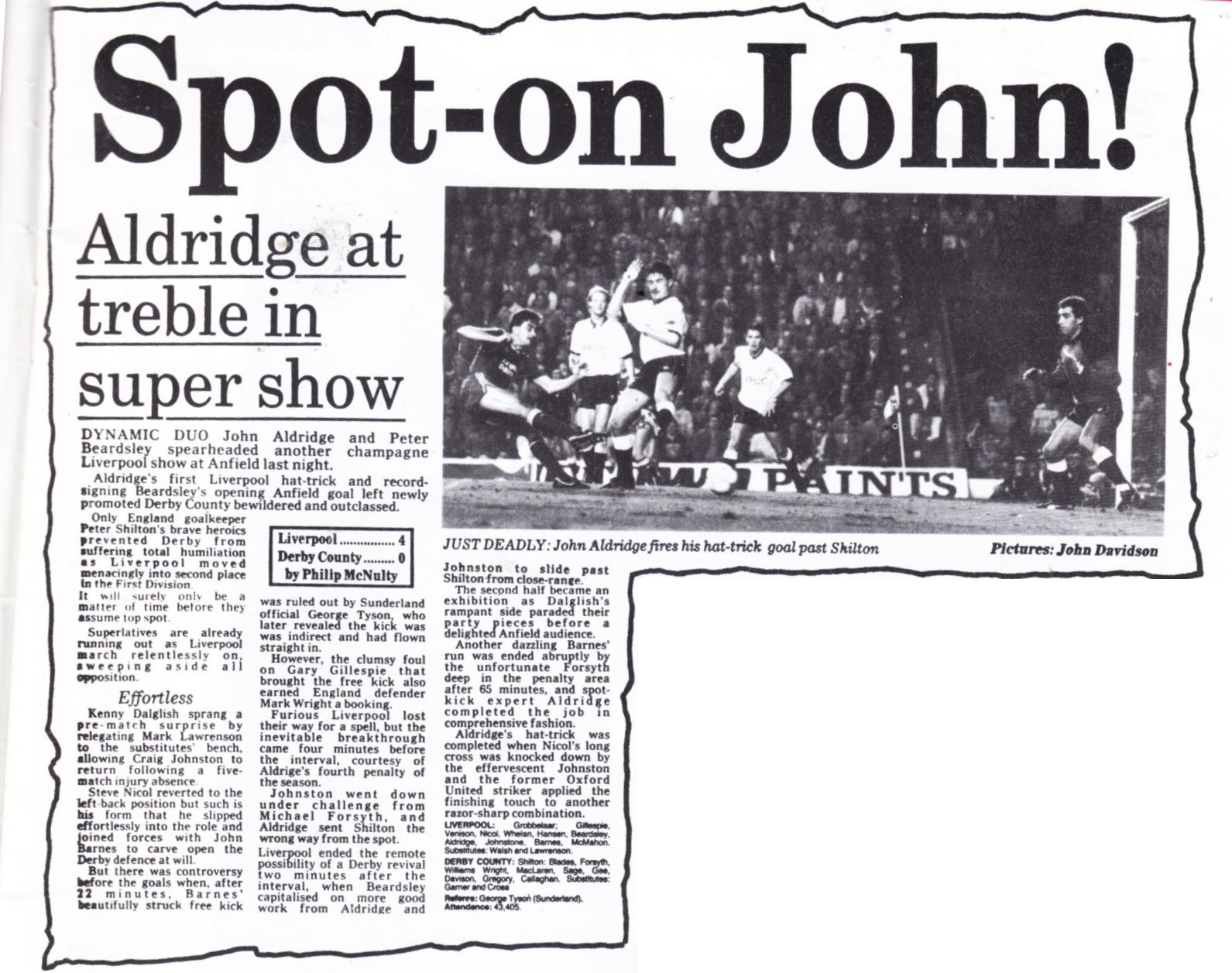 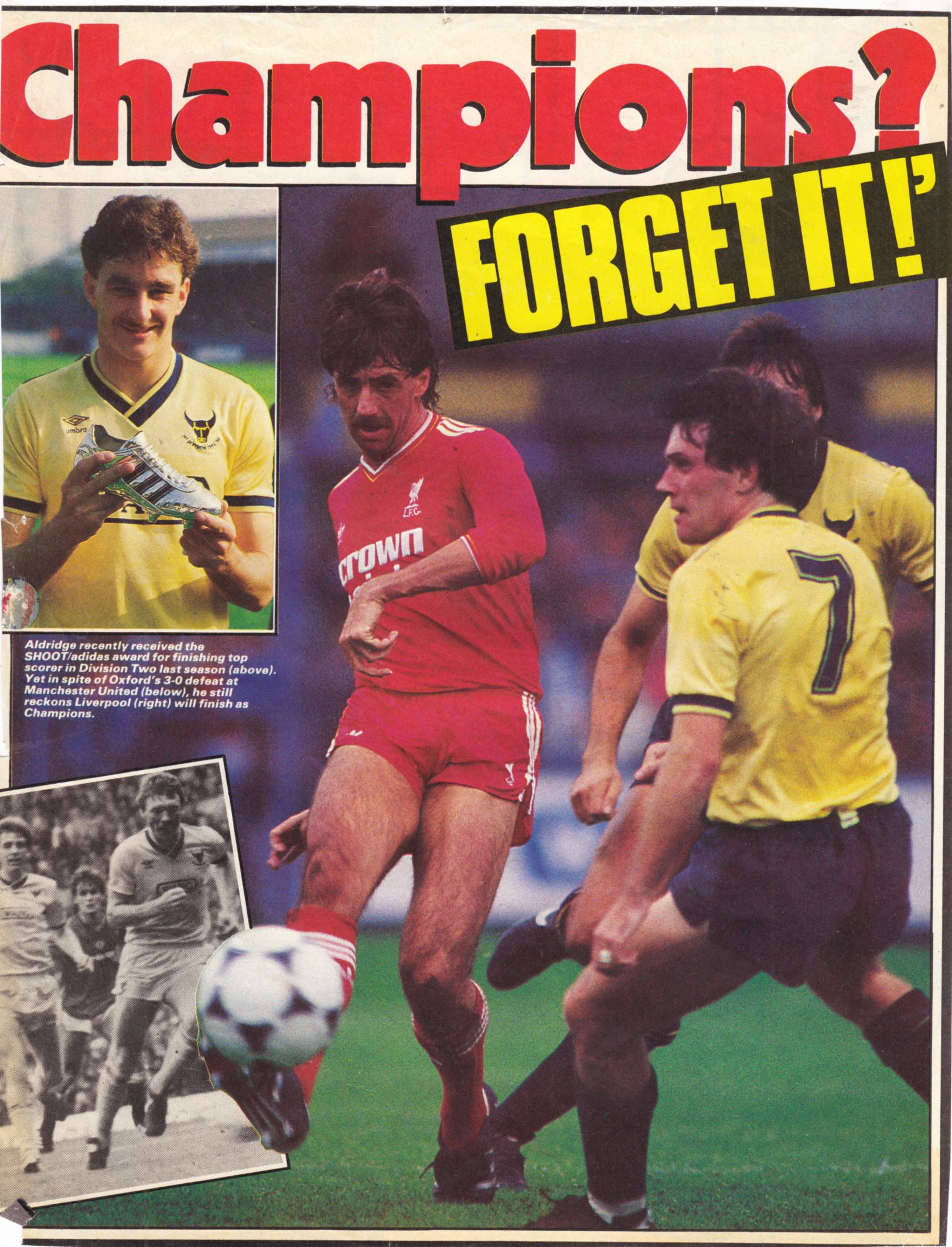 Aldridge predicts the title for Liverpool - 1985/86 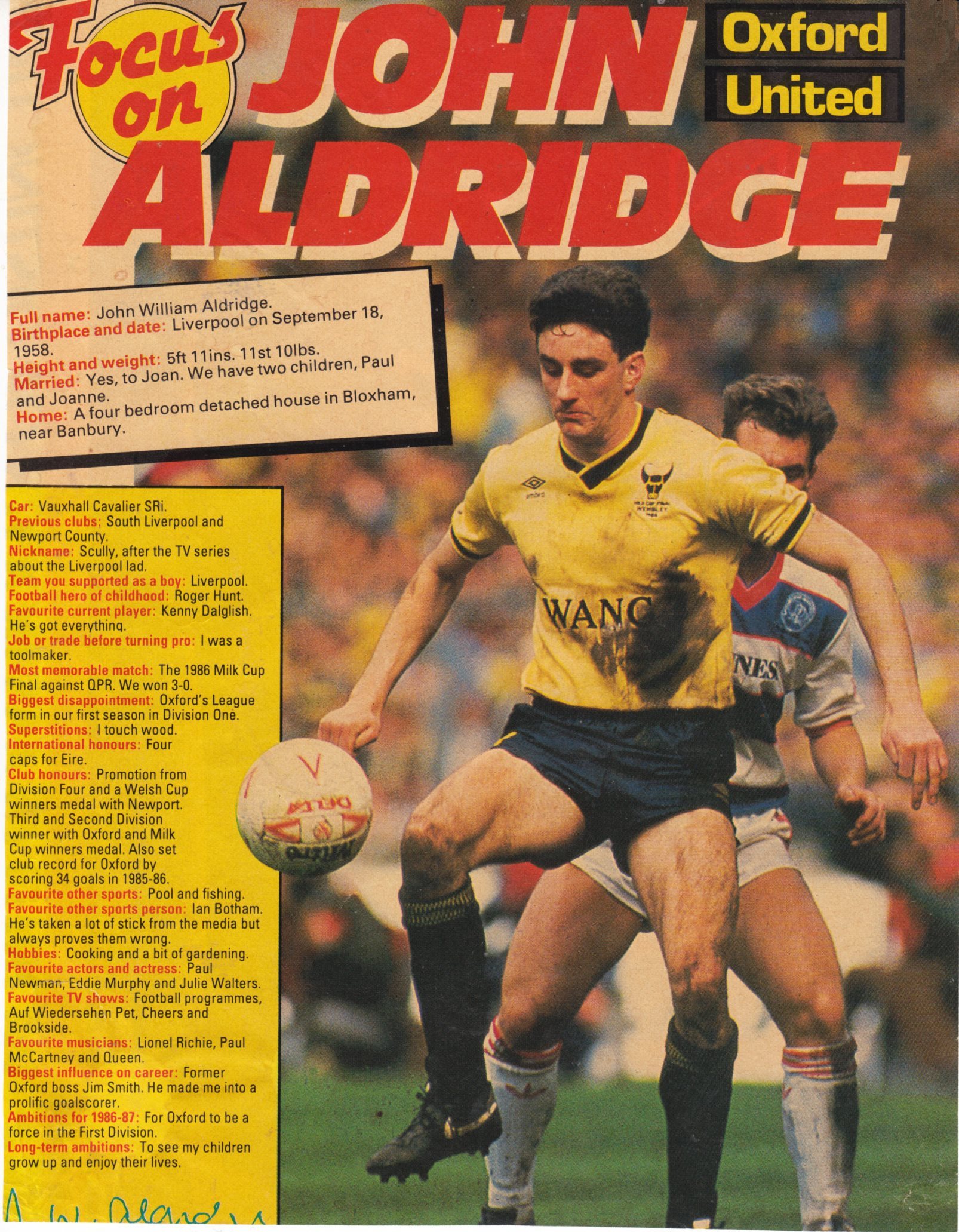 Another Focus on Oxford's John Aldridge 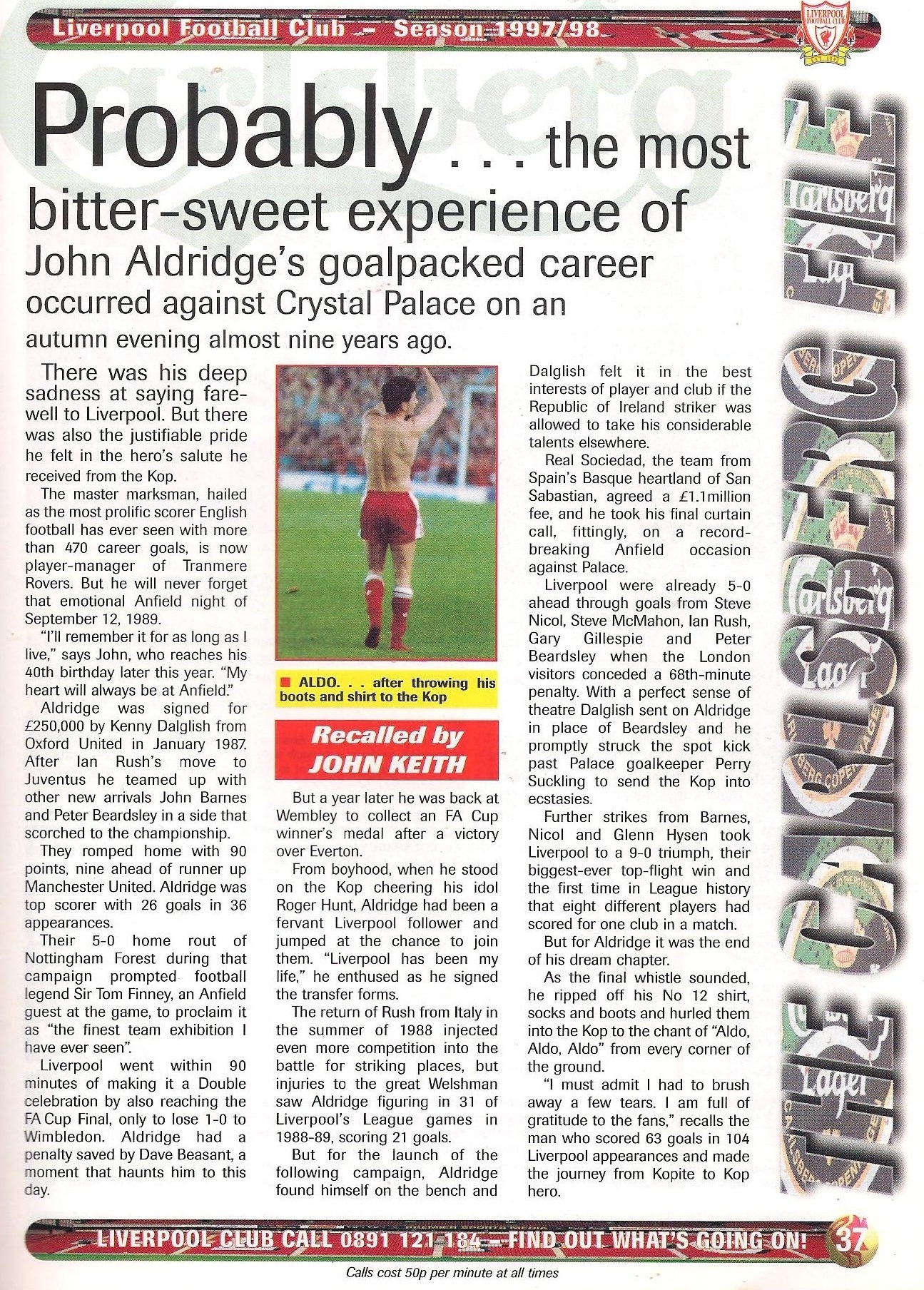 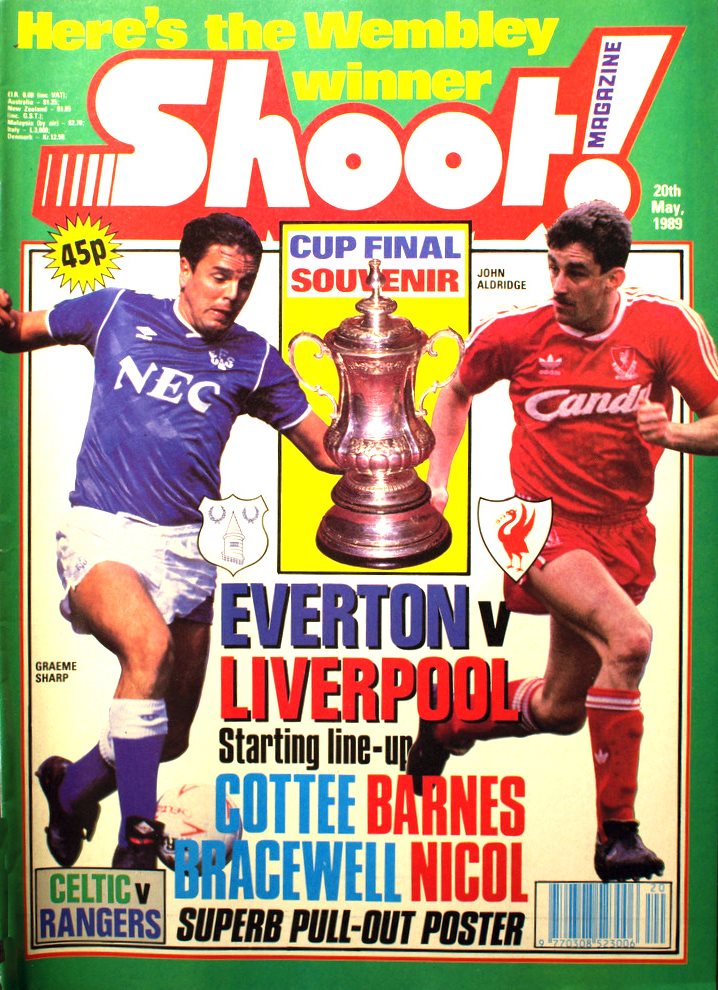 Everton and Liverpool head for Wembley - John Aldridge on the cover of Shoot! 20 May 1989 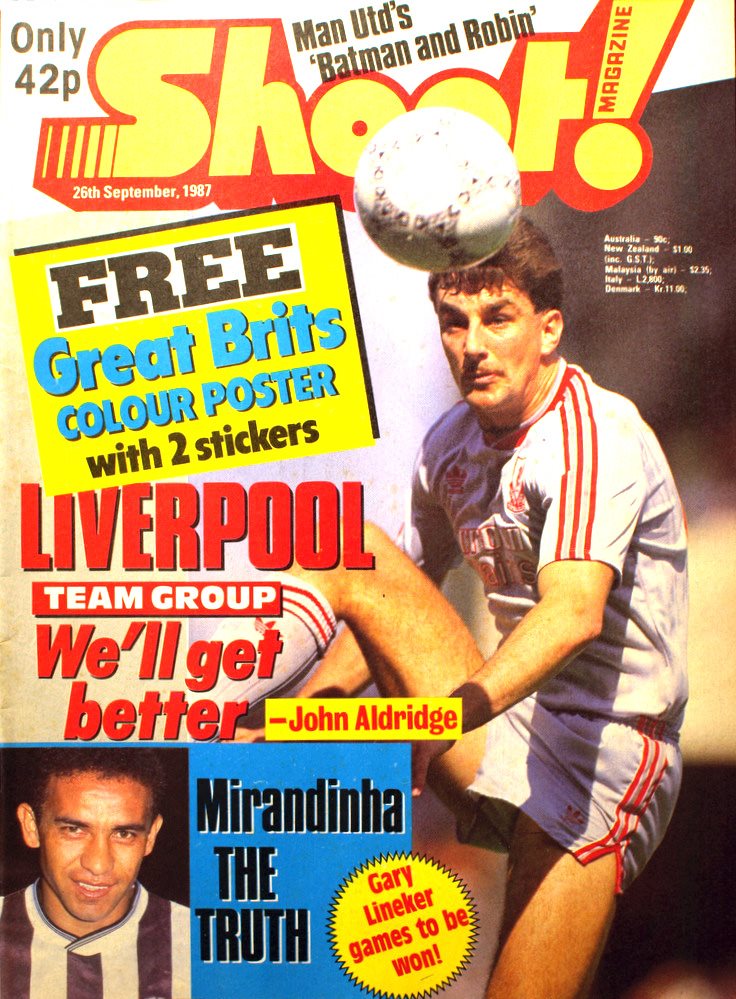 John Aldridge on the cover of Shoot 26 September 1987 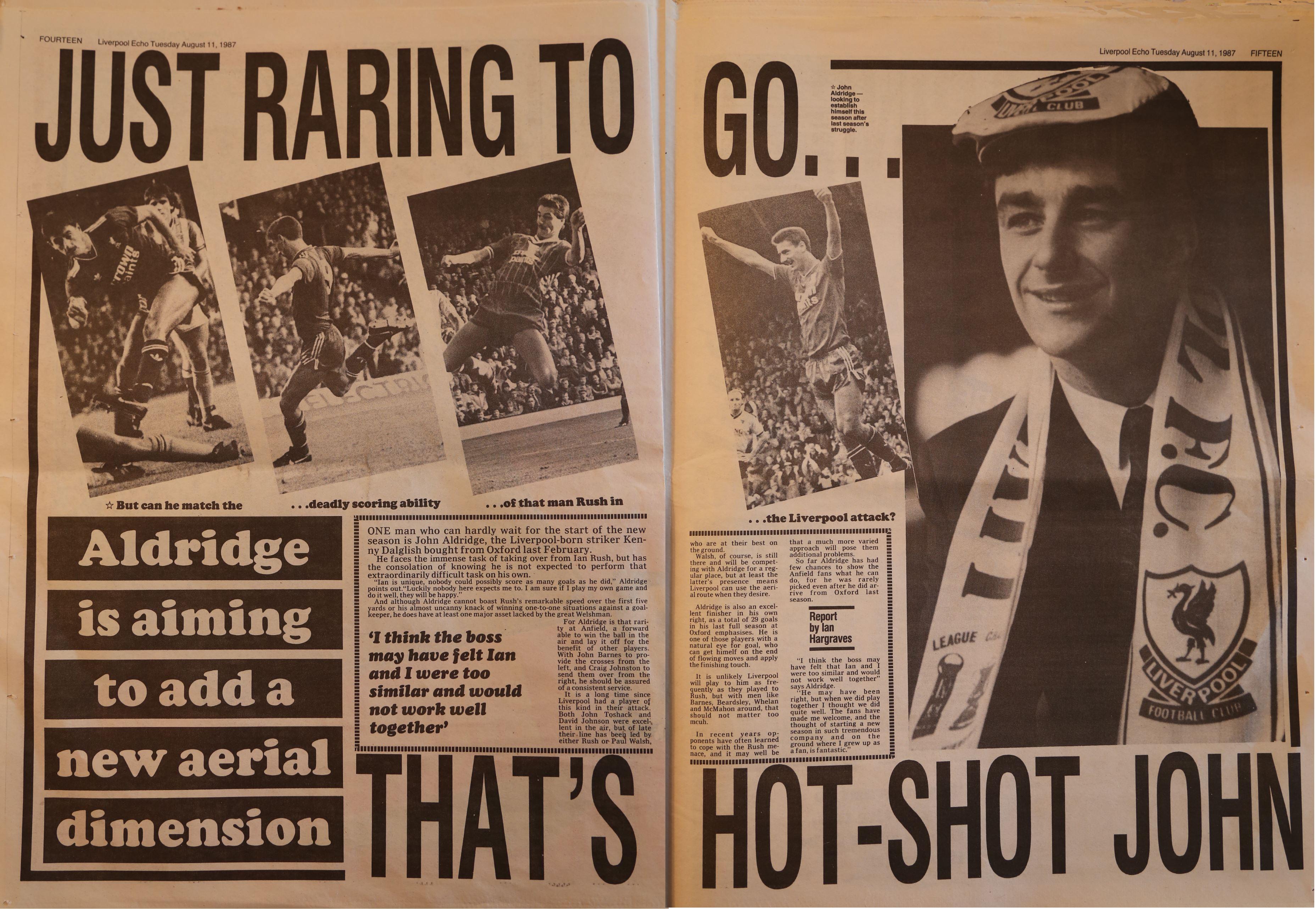 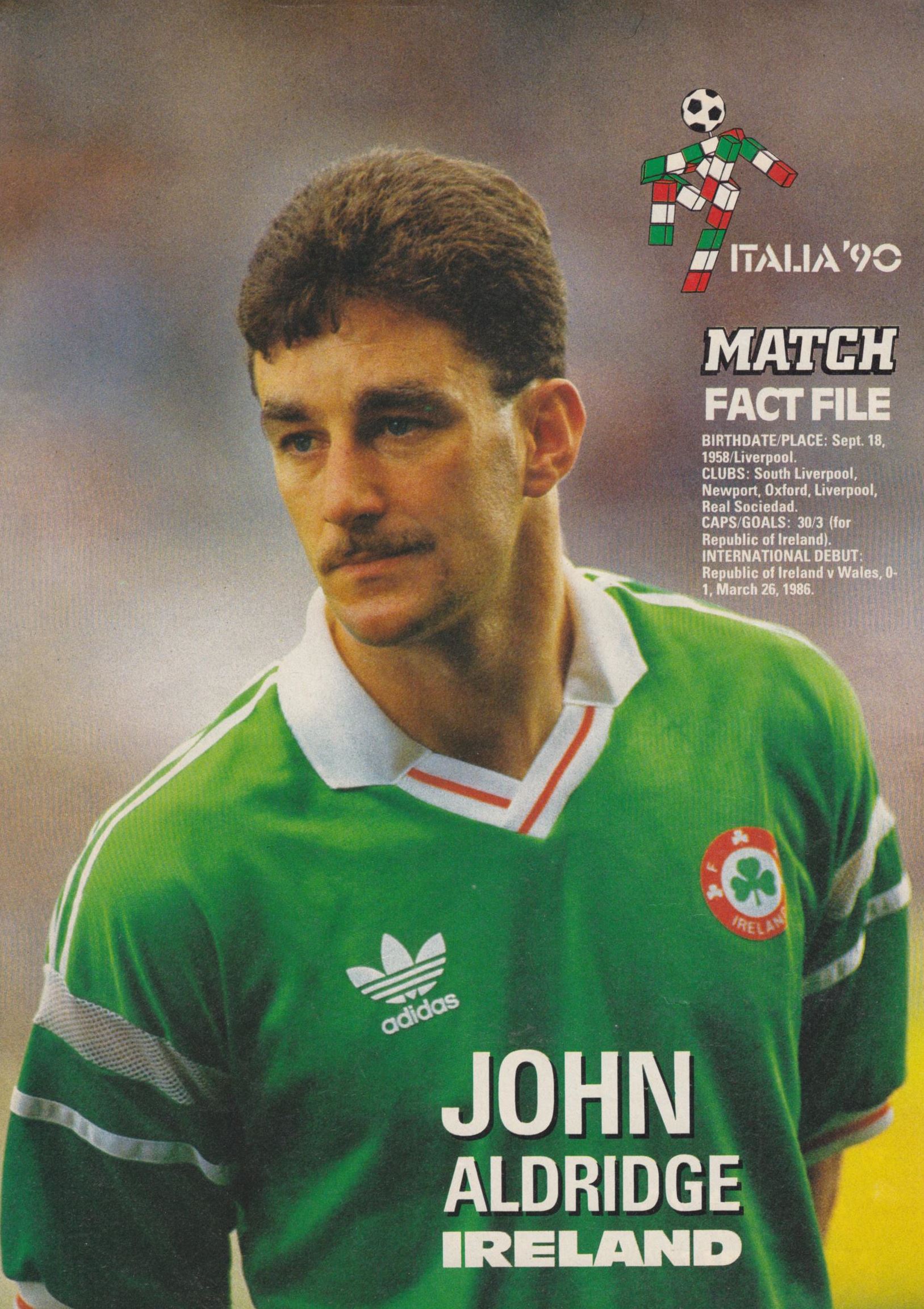 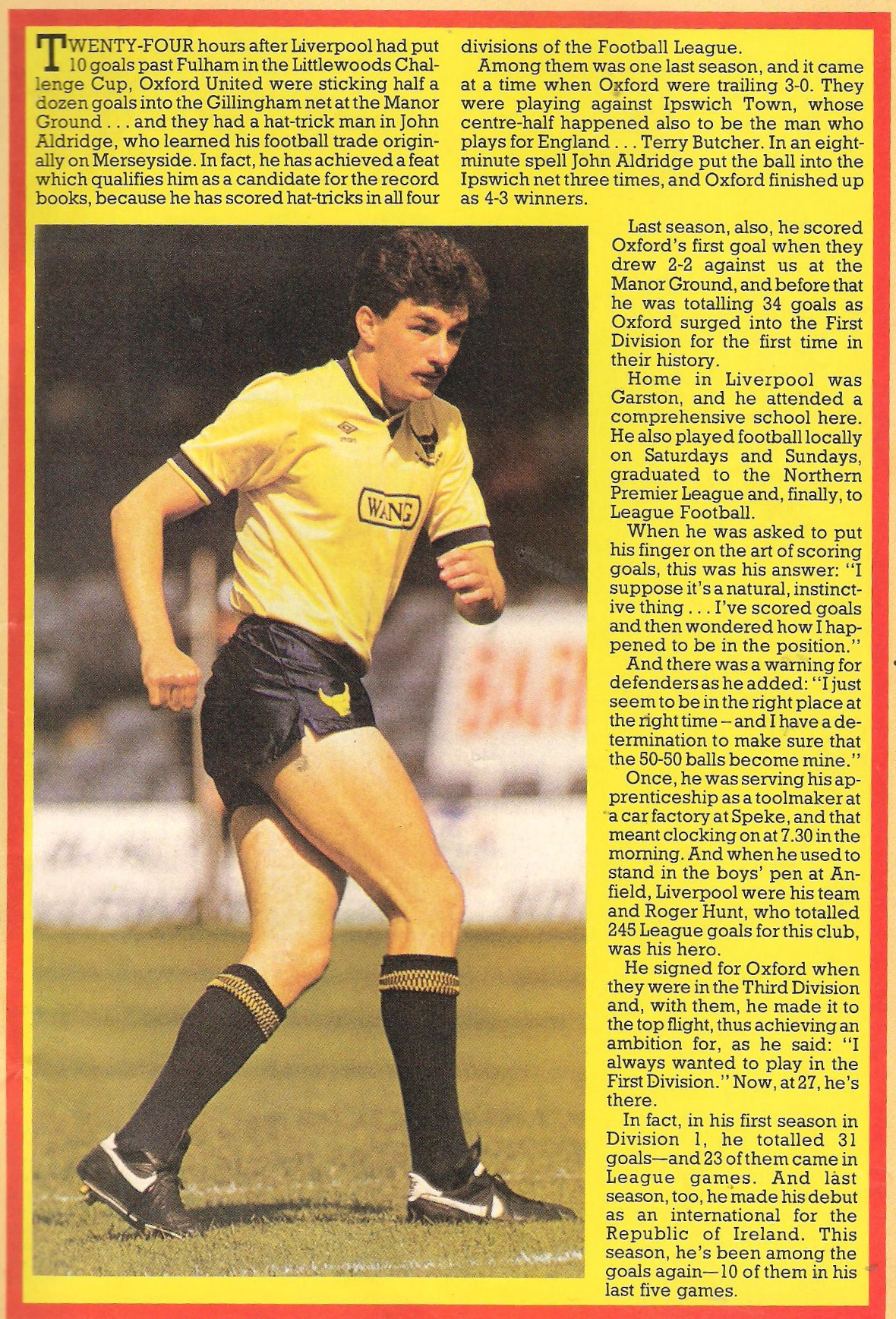 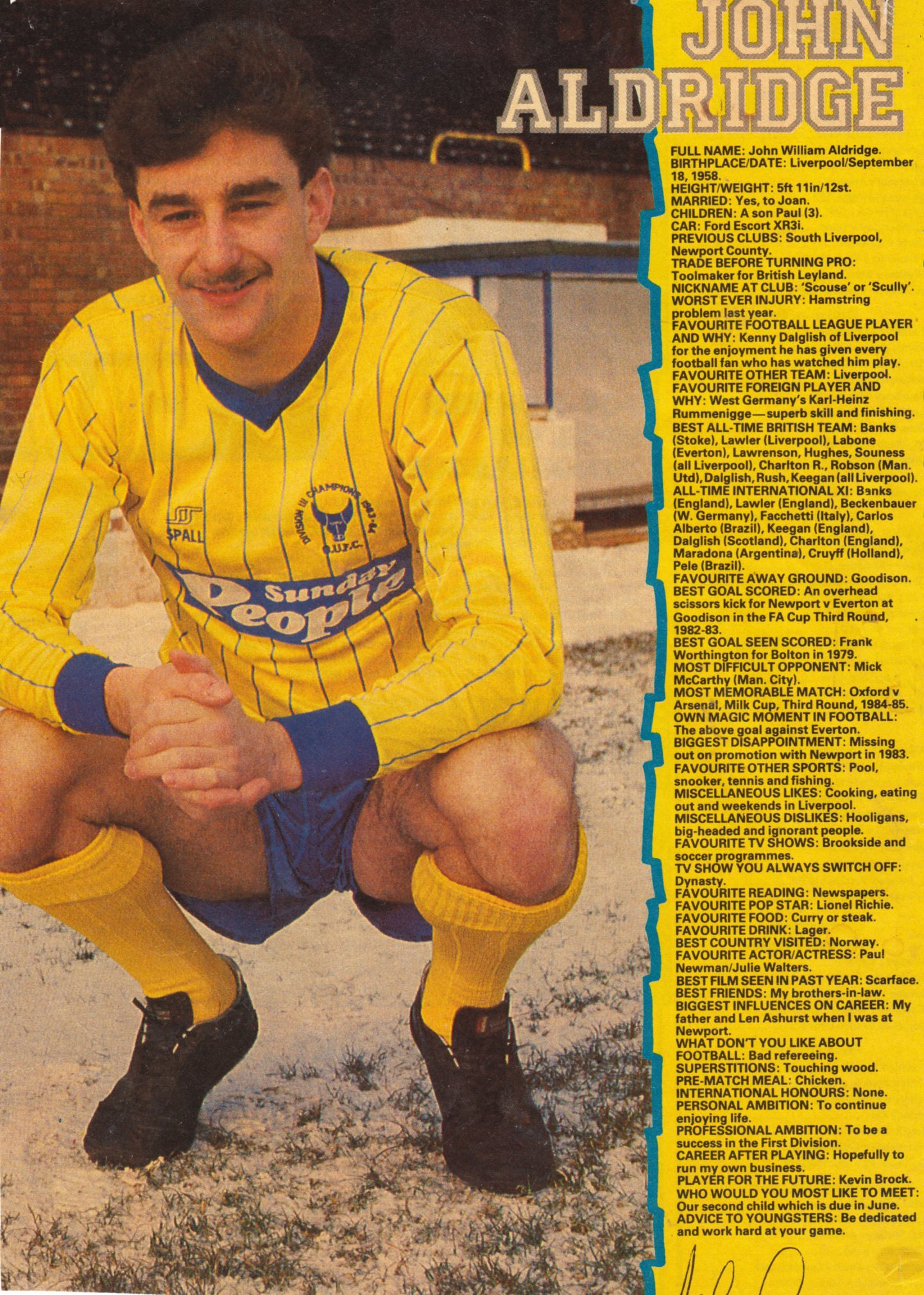 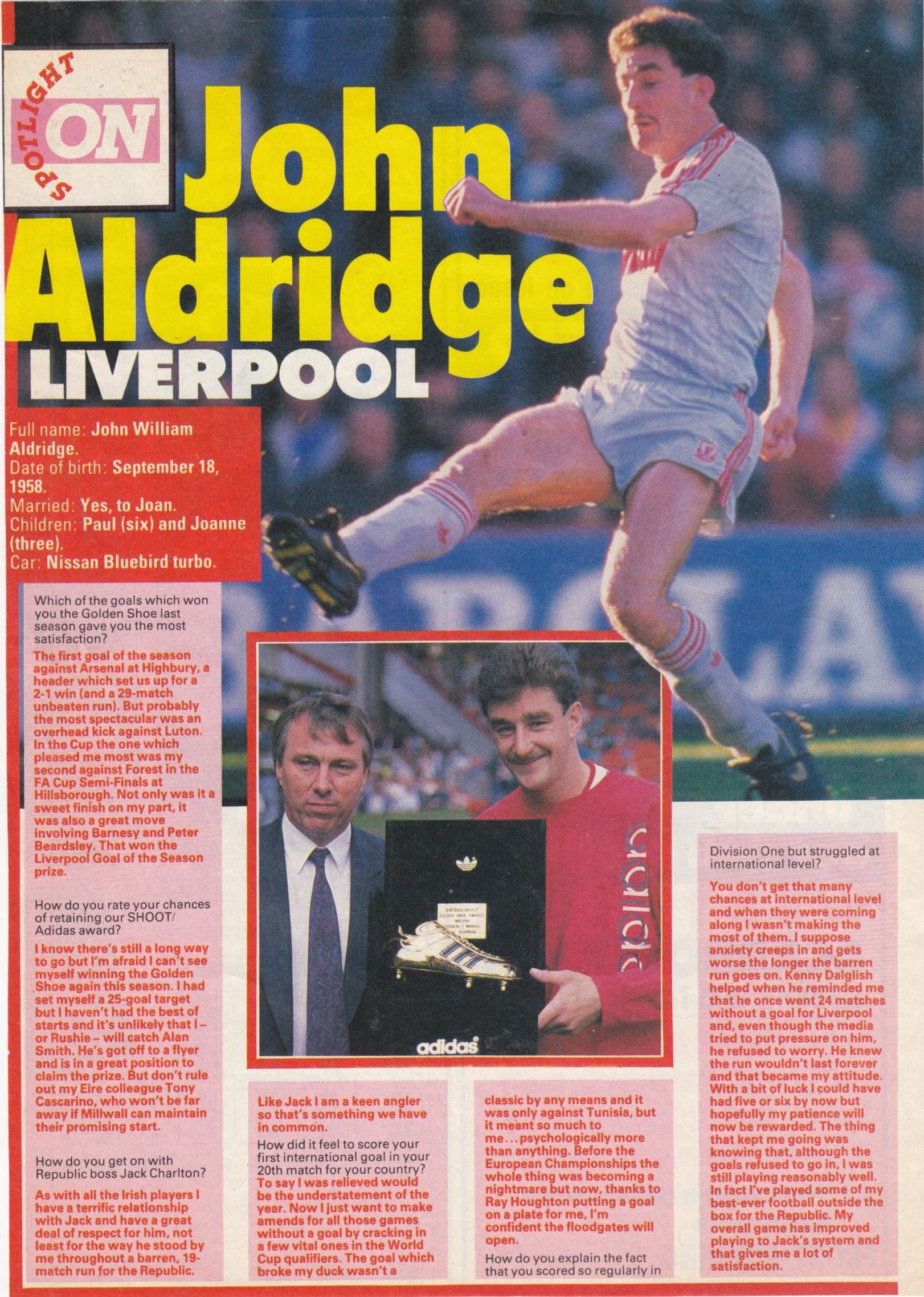 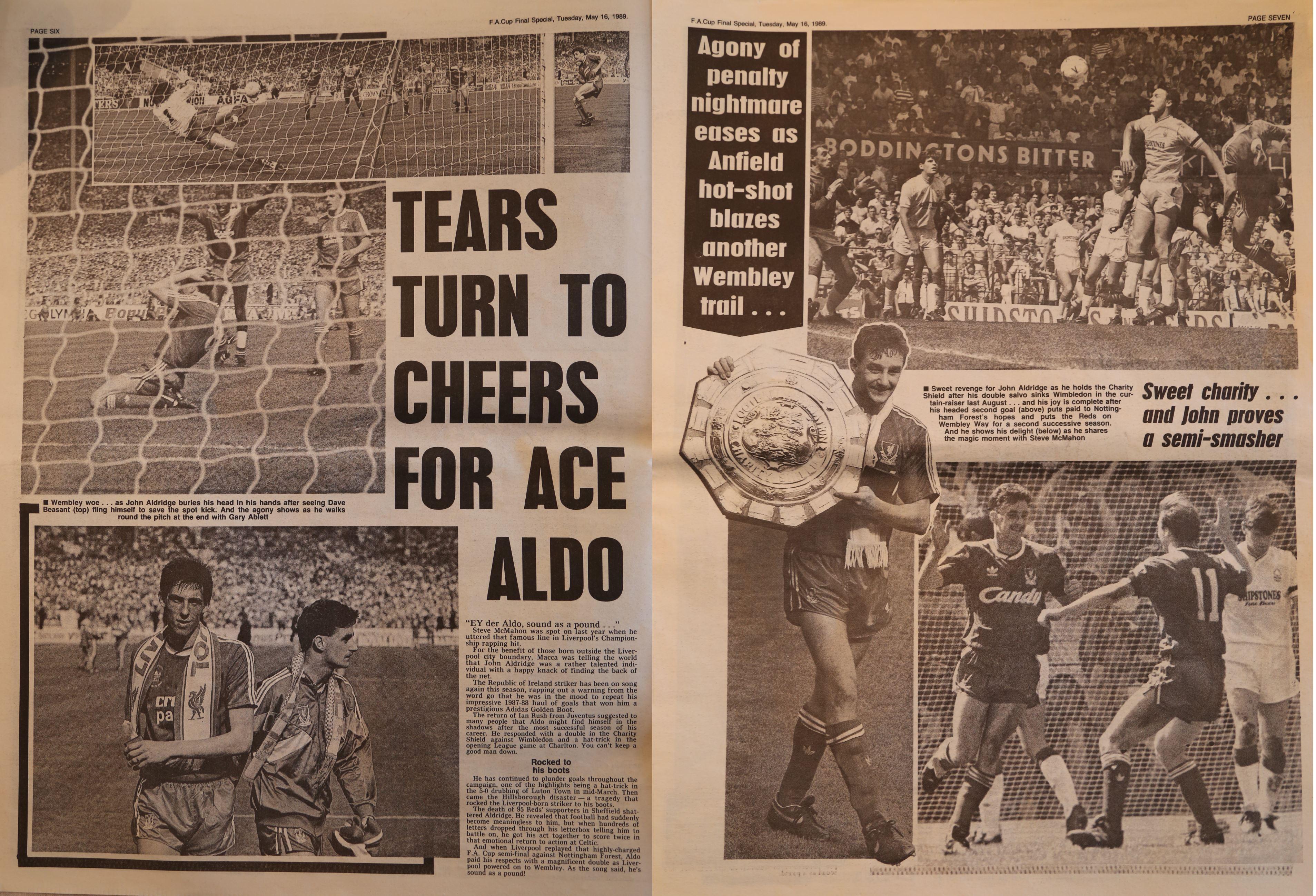 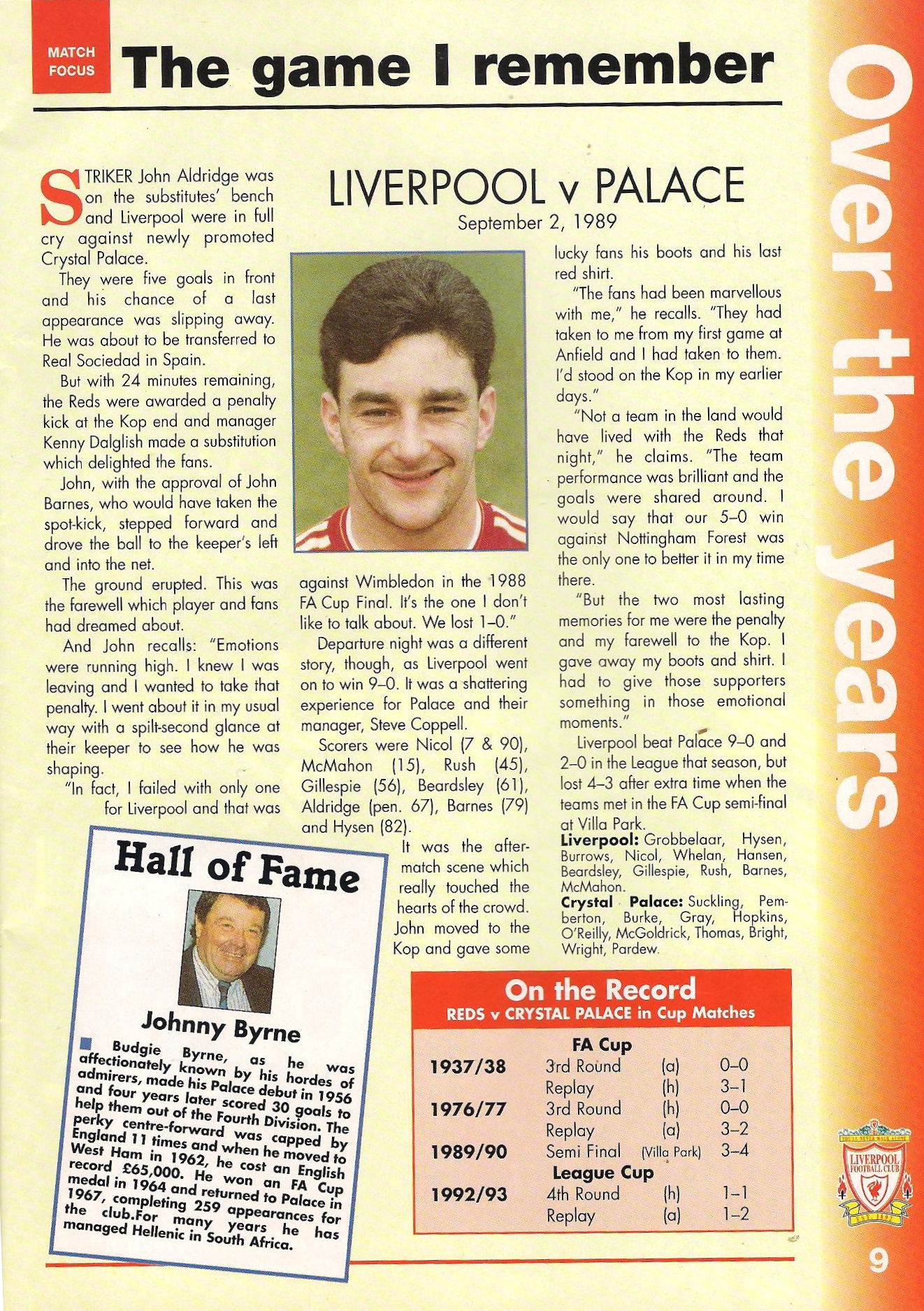 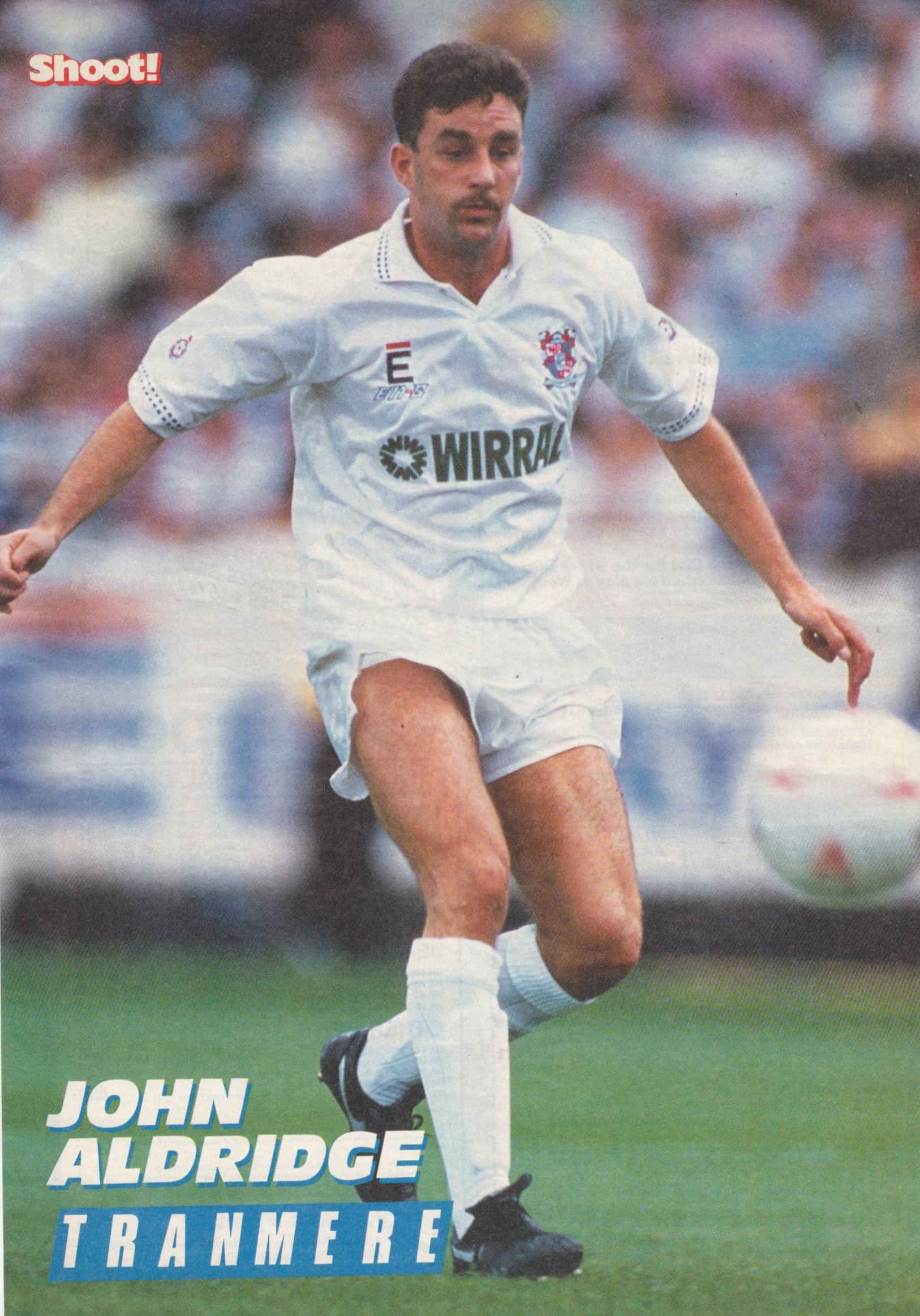