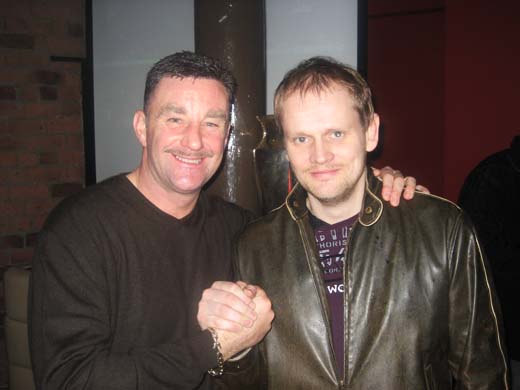 John Aldridge was part of Orry's match day corporate hospitality package. He entertained guests after matchdays at Anfield with some priceless stories from his career and always has a strong opinion on various topics that might crop up. LFChistory.net caught up with Aldo at one of these functions to have a quick chat on his colorful career at Liverpool.

To give you an idea how colorful his LFC career really was it is enough to have look at his first day, 27th of January 1987, at Anfield which he describes in his autobiography: "My Story".

"Joan had arranged a party in the Hunts Cross Snooker Club. Touchingly, she had gone to great lenghts to make sure all my family and friends were there to celebrate my move to Liverpool. The problem was we all ended up drunk and the night turned sour. I don't know how it started or how it finished, but somewhere in between I allowed my frustration to show by punching a window. If only I'd known there was a brick wall the other side of the glass! Liverpool don't like new players turning up with broken hands, so I reckoned suffering the pain was preferable to telling Kenny Dalglish the truth.

My first day at Anfield went well. I gave the obligatory interviews, posed for the cameras, and nervously sipped water from a bottle. Then Ron Yeats show up - Big Ron Yeats, the captain of the Liverpool team when they won the FA cup in 1965. 'All right, John how are you?' he said, grabbing my right hand and shaking it with enthusiasm. The pain shot through my body. On another day, a normal day, I might have fainted. But I had to keep up the facade so I grinned weakly at Big Ron, exchanging polite words with him. Screaming in agony could wait a little longer."

Aldo, a lifelong Red must have been thrilled to sign for his boyhood club... 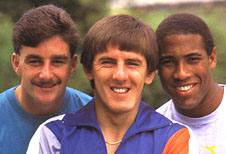 Aldo was bought in the latter part of the 1986-1987 season which was Ian Rush's farewell season before he left for Italy. Aldridge mainly warmed the bench, but Dalglish assured him he would be very much of his plans the following season. Barnes and Beardsley were bought in the summer and once the 1987-1988 season started Aldridge was Liverpool's main striker. Liverpool conquered the league by some margin and Aldo enjoyed every minute, scoring in 9 consecutive league games at the start of the season which is still a Liverpool record and a total of 29 goals.

I was really fortunate with John Barnes and Ray Houghton out wide. They were fantastic. The best player I've ever played with was Barnes.... and Paul McGrath for Ireland. Steve Nicol was fantastic as well. The best character in football I've come across.

Let me tell you something. I had an illness and my illness was I had to score goals! If I didn't score goals I was sick.

Aldridge was a fantastic goalscorer but also embodied Ian St John's toughness on the field and never gave an inch. He was maybe lucky that there were no close-up camera angles by SKY Sports in those days.

I was aggressive. I come from a place in Liverpool that's very tough. You have to fight your corner to survive. That helped me in football. I wouldn't let anyone overpower me. I was the boss. I used my elbows and a kick in the back. They were my weapons, the elbows, my knees, my head. When they head the ball you come a bit late and head them. You could do those things then, but not today. I was involved in fisticuffs on the field. Did I get sent off? Liverpool no, Ireland no, Tranmere yes, Oxford yes, Sociedad yes and Newport County yes. I got sent off seven times in my career.

Despite his fantastic goal record Aldo must have had some weakness in his game.

I don't know, I've never been asked this question... My control was good, my passing was good and my heading was very good. I was quite quick. I don't think I had any specific weakness. I was never bad at one specific thing.

Liverpool fans and Aldo were astounded when Ian Rush returned after only one year at Juventus. Aldo saw it rightly as a threat to his place, but Rush struggled to impose himself. Aldo was still Liverpool's main goalscorer and added another 31 goals to his tally in the 1987-88 season. Once Rushy was back to his best, the writing was on the wall for Aldridge.

I felt aggrieved to a certain degree when Rushy returned. I felt though I could play with Rushy and Peter Beardsley. I didn't want to be prized out and in the end I was. It hurt a lot when I left. You don't sell someone who has scored 31 goals a season. Dalglish has never given me a reason for doing so and I was very bitter for some time.

Aldo has always been one to speak his mind and he had a dispute with the wife of his boss, Kenny Dalglish, which might not have helped him, but his mind was elsewhere after the horror of Hillsborough as he battled depression. Quote from "My Story":

"I was no longer able to keep my emotions to myself. The tensions of Hillsborough, already overwhelming, were beginning to affect my behaviour in public. Depression, not too mention the guilt, was starting to show in all the wrong ways and, for a short time, I struggled to handle myself in the appropriate manner. That feeling, when you think your head is going to explode, makes you react in strange ways and I had a temporary loss of control."

You have very strong opinions... did you bounce yourself out of the club by being critical of the wrong people?

You would have to ask them. You might be right or you might be wrong. We all make mistakes in life. Things happened I shouldn't go on about because it's in the past. We all stand up for our principles, morals and standards and I always do that. I'm a very honest person.