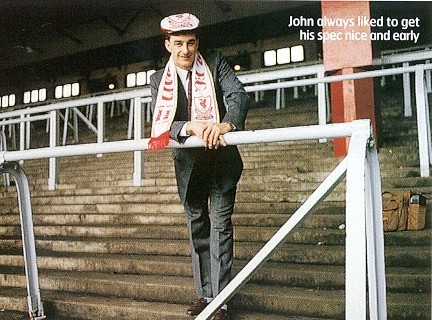 The odds would not have been great for UK Players who would have bet on John Aldridge to join Liverpool from Oxford in 1987.

John Aldridge talks about his arrival at Anfield on 27th of January 1987 in his autobiography: "My Story".

"Gathering dust is a newspaper archives is a picture of my first day as a professional at Anfield. Take a closer look and you can see two plasters on my right hand. As my hand was not in a plaster cast, few people would have known it was broken. Joan had arranged a party in the Hunts Cross Snooker Club. Touchingly, she had gone to great lenghts to make sure all my family and friends were there to celebrate my move to Liverpool. The problem was we all ended up drunk and the night turned sour. I don't know how it started or how it finished, but somewhere in between I allowed my frustration to show by punching a window. If only I'd known there was a brick wall the other side of the glass! Liverpool don't like new players turning up with broken hands, so I reckoned suffering the pain was preferable to telling Kenny Dalglish the truth.

My first day at Anfield went well. I gave the obligatory interviews, posed for the cameras, and nervously sipped water from a bottle. Then Ron Yeats show up - Big Ron Yeats, the captain of the Liverpool team when they won the FA Cup in 1965. 'All right,John how are you?' he said, grabbing my right hand and shaking it with enthusiasm. The pain shot through my body. On another day, a normal day, I might have fainted. But I had to keep up the facade so I grinned weakly at Big ron, exchanging polite words with him. Screaming in agony could wait a little longer."

John would have liked to use this bonus, no doubt, but he had a nice salary at Liverpool, finally after he had been in the lower leagues up to that point. Aldridge went on to become a great player for Liverpool, scoring goals for fun for each of his clubs. The disappointing thing was that he left so soon after scoring 63 goals in 104 games in 2 years and 8 months. He was 31 years old, but he went on to score regularly for the next nine years. He could have played at the top for Liverpool as he did in Spain for at least 2-3 years.

"Everyone knew I didn't want to leave. I'd have stayed there for the rest of my career if I could and I told Kenny I wouldn't go if he'd give me a chance. But he made it clear that Ian Rush and Peter Beardsley were his preferred front two and so, with a World Cup coming up the following summer, I realized I couldn't hang around and just sit on the bench."

Copyright - My Story by John Aldridge