First of all I’d like to welcome Pompy to the Big league and congratulate them on last years promotion. That done, what a welcome they received. Heavy rain all morning and up to kick off had a big effect on today’s gate, especially on the uncovered Kop. The sooner the club invest in a roof for the kop the better, as it can only improve attendances.

Before the fans had time to settle, Devlin had continued his amazing scoring run. Surprisingly both came from the left. Pither had advanced down the left wing and put in an early cross. Devlin has a habit of allowing the ball to pass him, and it was one of these moves which lead to the opener. As Pither’s centre came across, the Portsmouth defenders expected Devlin to trap the ball and came towards him with the idea of a tackle, but Devlin fooled them all and instead of trapping the ball let it cross his body to his right foot and without hesitation drove the ball under the static Jarvis.

The crowd didn’t have to wait long and Liam was at it again. The second goal came from a corner kick which Jarvis, Portsmouth’s deputy keeper pulled down from under the cross bar, only to drop it among a bevy of players. Among them was Devlin, who wasted no time at all in burying his second goal in five minutes.

Portsmouth rarely got going early in the game, they seemed transfixed by the dazzling performance of the Liverpool forward line. Liverpool appeared to be able to strike at will as soon as one attack ended, they recovered the ball in midfield and started another attack. If it were not for a great save by Jarvis from Reid and another from Edmed, this game could have been over as early as the eighth minute.

Portsmouth looked very shaky, but a break by Cook which brought a magnificent save from Scott finally appeared to settle the nerves of the visitors. Forward, Portsmouth’s right winger also went close on the next attack, but a supremely timed tackle by Mackinlay put pay to that.

It was at this point I noticed the pitch was cutting up rather badly and players were having difficulty keeping their feet. It was small wonder that there were minor errors on both sides play, but on the whole the football was solid and effective. The next Pompy break started by Jackson, found Haines in space, and his run ended with a fine through ball to Cook who slipped the ball under Scott and into the Liverpool net. Such a shame really. Mackie had not been paying as much attention as he aught and he had strayed offside. Ah well never mind lads, even if you do better the skills of Scott, you must play within the rules.

Portsmouth’s left wing was proving to be the most enterprising of the line. In fact, there was a lot of danger coming from that side, but there was never a player in the box to meet the good crosses coming in.

In the twenty second minute, Liverpool went further ahead when Pither scored his first goal for the senior side. Jackson had unquestionably, but at the same time unintentionally, handled before he sent the ball out to Edmed, who in turn lobbed it into the middle. It was sent back again after fine control by Reid. This time the ball was collected by Hodgson, who tried a swinging centre, which was headed away by Foxall, sadly, only into the path of the advancing Edmed. Edmed controlled the ball on his chest, pushed it passed the advancing M’Coglan and whipped in a vicious cross. Before Jarvis could react to the out-swinging cross, Pither cut in before him and headed home. A great move, finished with a great header, congratulations Mr Pither.

Liverpool at this stage, were complete masters of the game, and the newly promoted side were looking more vulnerable than the Christians in Rome. Every time they did get a break, Scott was proving he was equal to the task. It must be saddening to eventually pass all the Liverpool out-players only to face Scott. Haines brought a magnificent save out of Scott as did Forward minutes later. Forward’s low drive was pushed around the corner of the left hand post with what most of us would consider a wonderful save. But this was Scott, to him such tasks were completed with his eyes closed.

Devlin who was giving Foxall his very own nightmare so far, decided it was time for amnesty and wondered over to the left wing. Davies it has to be said did not look best pleased with this decision, and he was right to worry. The very next move, Bromilow picked up the ball in the Liverpool half and pushed the ball wide to Devlin. Devlin, I never imagine ever played croquet, but when he slipped the ball through Davies legs, it was very croquet like. As he passed Davies on the outside and collected the ball again, one or two wags below me, shouted “Ole“ as a Spanish crowd would to a matador, this amused me.

Devlin swung in a beautiful cross which Hodgson met with a powerful header.
“Goal” shouted the kop.
Goal, signalled the referee.
But as the players started to retreat to the half way line, the Portsmouth players surrounded the referee. On advice, he consulted the linesman. As the Liverpool team lined up for the restart, the referee awarded Pompy a goal kick. And if Liverpool were looking confused, let me assure them and the readers, so was I. 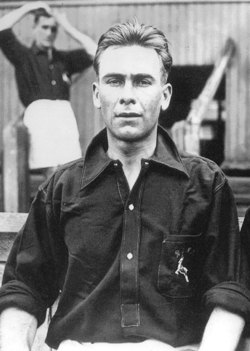 Hodgson it has to said was not amused. However, he was not to be done of his bonus as two minutes later he scored again. He collected the ball just inside the Liverpool half and with all the venom he could muster thunder bolted his shot over the keeper. Although Jarvis did get his hands to the ball the power appeared to unbalance him and as he fell backward the ball continued into the net. Hodgson’s cursory glance to the referee seemed to pose the question, “was that one ok”. The referee confirmed the goal by pointing back to the centre circle.

Lucas was playing well today under continual pressure from Cook and Watson, but each time he was challenged he proved up to the task. Haines who was also now playing well, was finding Jackson was also up to the task. To be honest, no matter which part of the pitch you were looking at, each Portsmouth player was finding his equal today. Forward was having a good game in fits and starts but even on the rare occasion when he did get passed Mackinlay, his shooting was abysmal. Thirty seven minutes into the game and Hodgson made it five. He seemed to take Reid’s centre quite casual, but through his heading down instead of up, which Jarvis had anticipated, he had the goalkeeper beaten to pieces.

At this stage I must mention the sterling work of both Reid and Pither. It was good, it was effective, and promises well for the future. Reid showed many wise touches, and each responded well to the others game. McMullan also got through an amazing amount of successful work.

Haines had another break away, but again he found Scott between the sticks who nonchalantly saved without much effort. Every time Portsmouth had promised to do something, they failed to net and sadly for them, every break away that followed appeared to lead to yet another goal.
This time it was Devlin who went through when Reid headed the ball forward. The centre forward had to race with goalkeeper Jarvis, and, just getting the ball a second or two before the keeper, he glided the ball beyond him and the ball just trickled across the line, to make the score 6-0. And I nearly forgot, another hat-trick for Devlin.

As the referee blew the whistle for half time, to be fair, it must have sounded like a mercy call to the Pompy eleven. As they trudged off for their half time tea, I began to wonder if they would slip away on the coach and not come out for the second half. They looked distraught, but as I said earlier “Welcome to the big league boys.”

Portsmouth did indeed come out for the second half, I suppose it was unfair to suggest they wouldn’t. The game entered a period where to be honest the score must have seemed like the result. Neither side looked like scoring and all the play seemed to be concentrated in the centre circle. But then the Gods who look down on poor souls, seemed to show Portsmouth some charity. Haines finally beat Scott and I’d like to say it was totally unsportsmanlike for the Liverpool end to cheer, like they did. But they made quick atone when they applauded the players back to the halfway line.

Message to the wag below.
Shouting “we want two, was not appreciated by any in the directors box”
But it did bring a smile to my face.
The wag was rewarded shortly after, Pompy did indeed score the second.
I bet he wishes he’d stayed quiet now, well at least he didn’t say “we want three”.

Devlin scored his second quad in four weeks on the next Liverpool break, a majestic header from a cross by Edmed. Edmed had beaten M’Coglan all ends up, feigning a move inside he pushed the ball wide, and through across a beautifully inviting head high cross. Devlin finished in the quality the cross deserved. Jarvis looked fed up. As he slapped his side, he looked like a petulant schoolboy who had been sent to dunces corner. I actually felt sorry for him when Hodgson got his hat-trick minutes later. And I think it will be a very long time before he can put his first visit to Anfield behind him.

Notes
Devlin’s second quad in four weeks gave him an amazing tally so far of 13 goals in nine games. What was sad, was he sustained an injury not long after which put pay to his Anfield career. His record of 15 goals in only 14 games would fade in the memory and lost in the records. To date there is still no evidence on the official site that he even existed. Tragic really, lets hope we can put that right in the near future.

This was Hodgson’s third hat-trick since joining the club and people should never forget, that he also achieved more braces than at a Sandringham pheasant shoot, during his career at Anfield.